Jim Rogers once said, “Commodities tend to zig when the equity markets zag” – he may have well been referring to the seismic shift in the Arabian desert that seems to be in the works through the Saudi Aramco IPO.

Aramco is planning an estimated US$2tn IPO in November, according to the Wall Street Journal. The listing would raise between US$20-40bn, making it the largest emerging market IPOs of all time.

At least 40 banks attended a ‘beauty parade’ in Saudi Arabia in the last few days for the IPO. What the bankers may not be aware of is that they are about to herald a boom – there are strong signs that the five-year bear market in commodities could reverse dramatically with this move:

An IPO of this magnitude suggests that Aramco’s managers would be incentivised to maximise the value of the company. Oil majors trade on the spot price of the commodity and not the operating earnings. Hence, Aramco’s managers could exercise its vice-like grip on OPEC to cut oil production.

In 2019, Saudi slashed production to less than 10mn barrels per day, according to the OPEC arrangement. This is likely to raise the oil price to US$70 a barrel, which is the threshold from which the Saudis can balance their budget.

2) Inverted yield curve could be a boom for commodities 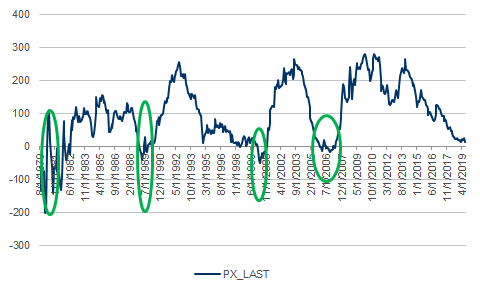 However, a recession is not the only prediction that the inversion implies – commodity prices may also rally in the face of negative yields and trade disruption. The last three instances (1998, 2001 and 2007) of the US 10-year yield falling below the US 3-month yield, have been the preclude to a 2-year commodity rally. In the two years that followed the inversions of the yield curve in September 2000 and July 2006, the Bloomberg Commodity Index rose 11%.

3) Years of low capex in commodities

The Bloomberg Commodity Index is down 43% since 2014. In the face of this rout, commodity majors such as ExxonMobil, BP, and Rio Tinto, have halved their capital expenditure. A dramatic cut in capex has also occurred among agricultural processors such as Bunge, Cargill and ADM. The result is systemic underinvestment in commodity supply. Hence, the chances of a commodity rally now are stronger than at any other point since 2014.

We reiterate our recommendations on branded and close to the bottom of the valuation cycle stocks. These include THBEV SP, CPF TB, NESTLE NL and NB NL. Among non-rated companies, INDF IJ and CPIN IJ still look promising. Branded consumer plays are resilient to higher commodity prices and typically have steady cash generation.