7 May 2022
Published by
Tellimer Research

We were fortunate enough to take part in numerous interesting and productive discussions over the course of the IMF and World Bank's recent Spring Meetings. These, along with the Fund's new World Economic Outlook (WEO), have helped us refine our views on the global economy and the prospects for individual countries – and their sovereign bonds.

In this report, we highlight what we see as the three major themes that investors should monitor for this year – 1) lower global growth and higher inflation, 2) tighter global financial conditions and 3) a rising risk of debt distress in many frontier and low income countries.

The external shock of Russia’s invasion of Ukraine and associated rise in commodity prices, alongside a renewed lockdown and slower growth in China, prompted the IMF to revise its growth forecasts down and inflation forecasts up in its new WEO. The Fund now projects global growth to be 3.6% in both 2022 and 2023, a downward revision of 0.8pp and 0.2pp, respectively, relative to the January 2021 WEO.

Although downward growth revisions were similar across advanced, emerging and low-income countries in 2022 and 2023 (see chart below), they vary widely by country, with some commodity exporters seeing upgrades (see here for a detailed breakdown of changes by country).

That said, scarring is projected to be much worse in emerging markets, with output some 5.2% below the pre-Covid forecast by 2024 in emerging markets versus just -0.8% in advanced economies, excluding the US, and +0.9% in the US. 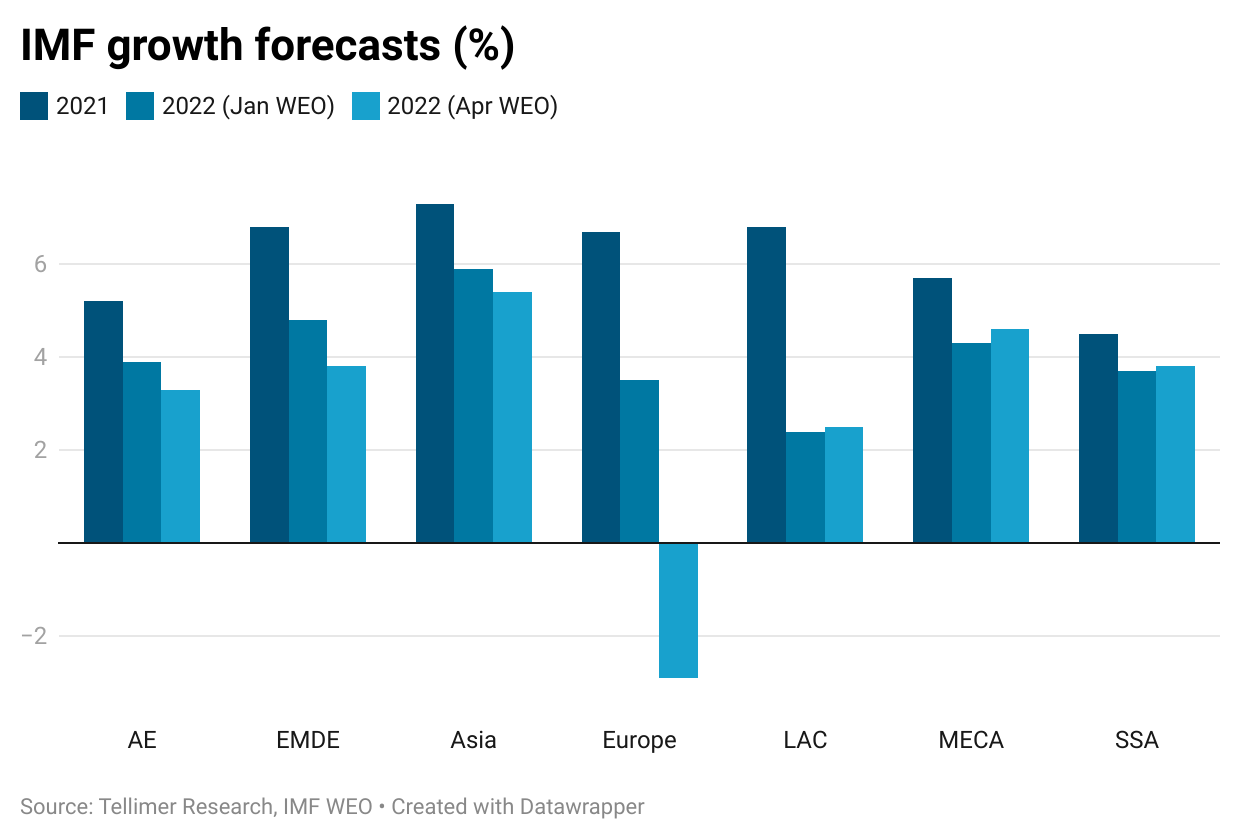 Differing outcomes are driven largely by differing levels of vaccine access and policy space, with fiscal deficits widening by a cumulative 13.2% of GDP relative to 2019 level from 2020-22 in advanced economies versus just 6.7% of GDP in emerging markets and 4.6% in low-incoming countries.

Commodity prices have been the main driver of rising inflation and longer-term inflation expectations remain well-anchored in most advanced economies, but the longer inflation persists the greater the risk that it becomes de-anchored, especially in emerging markets with less well-anchored expectations.

Lower growth, higher inflation and rising global risk aversion is a volatile cocktail for emerging markets. Against this backdrop, one of the key themes of the Spring Meetings, in our view, was the IMF’s concern over tighter global financial conditions, especially for emerging and frontier economies with less reliable access to financing.

We recently expressed concern that EM yields could rise as the Fed embarks on its tightening cycle, with the market already pricing in over 10 hikes by the Fed by year-end but the potential for a disorderly adjustment if inflation proves stickier than anticipated. EM assets typically perform well during Fed hiking cycles, but the current cycle will be of a similar magnitude as past cycles but in around half the time. Add in rising global inflation, lower growth and geopolitical risk, and the resilience of EM assets in Q1 seemed a bit perplexing (with the selloff driven almost entirely by higher US rates).

Indeed, since then, EM spreads have widened, which, alongside rising yields domestically and in the US (the 10-year breached 3% in intraday trading this week), has raised the cost of financing considerably for some emerging and, especially, frontier markets. Bond issuance has consequently dropped sharply so far this year, with some countries putting issuance plans on hold and those that have issued (like Turkey and Nigeria) paying a healthy premium over their existing bonds. This will make it difficult to meet rising external funding needs for many smaller commodity importers. 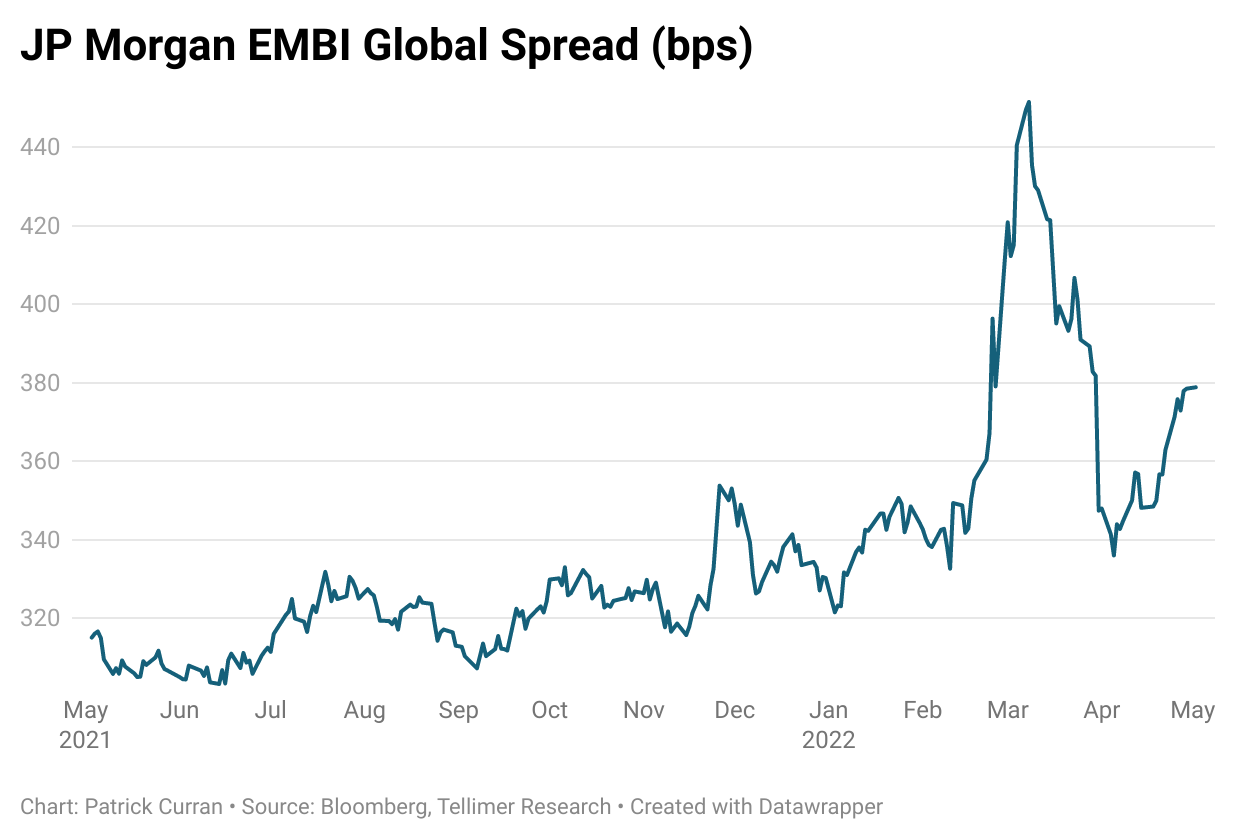 Further, while non-resident holdings of domestic debt have continued to drop in many emerging markets, the risk of portfolio outflows is rising and could increase the risk of balance of payments (BOP) crises at a time of heightened vulnerabilities for many emerging markets (the IMF has revised its probability of portfolio outflows to 30% from 20% in October).

Rising debt burdens and higher global interest rates have raised the risk of debt distress for many emerging and frontier markets. The median debt burden for emerging markets has risen from 40% to 60% of GDP since the 2013 taper tantrum, according to the IMF, and has nearly doubled for low-income countries that have less debt carrying capacity.

Although the rise in debt has been even more pronounced in advanced economies, falling real interest rates have pushed interest payments down from 6.8% of revenue in 2013 to 4.9% in 2021. This contrasts with an increase from 9.4% to 11.8% over the same period in emerging markets. If interest rates continue to rise, this could make it difficult for certain emerging markets to service their debt.

Although public debt is forecast to fall over the medium term in advanced economies, it is projected to continue rising across emerging markets. Against this backdrop, the IMF estimates that c60% of low-income countries are already in or at a high risk of debt distress. Alongside slowing global growth and tighter global financial conditions, the IMF is increasingly worried about a wave of debt distress across frontier markets.

The IMF has therefore called for “a timely and orderly resolution of debt” for some countries to avoid distress, expressing frustration with the slow uptake of and long delays to existing Common Framework debt restructurings. But while the IMF’s recommendations to improve the Common Framework, including expanding its scope to other highly indebted countries, are mostly welcome, bondholders may fear being made scapegoats amid official sector concerns over the lack of private sector participation and worry about the prospect of more pre-emptive action.

Meanwhile, policymakers are looking for effective ways to alleviate the weight of the debt service (as per the African Consultative Group’s statement on 23 April). We wonder what they mean by that.

The IMF also expressed concern over the boom in private sector debt, which is estimated to drag down growth by 0.9% over three years for advanced economies and 1.3% for emerging markets. Lastly, the IMF expressed concern over the risk of rising holdings by banks of domestic sovereign debt, which now account for one-fifth of banking sector assets and 200% of regulatory capital in emerging markets (see here for a more detailed summary and here for our past publication highlighting the risks for frontier markets). Alongside the rising risk of debt distress, a strengthening of the sovereign-bank nexus raises the risk of an adverse feedback loop that could trigger financial instability.