The year so far in EM and frontier fixed income

What a scorcher, and that's the latest US inflation print (9.1% yoy in June) – its highest for 40 years – not the first ever 40c temperature recorded in the UK last week.

Soaring US (and global inflation) has been the main investment theme this year, along with Russia's invasion of Ukraine in February. Rising global inflation already reflected post-Covid policy stimulus, supply chain disruptions, labour market shortages, and capacity constraints, although the further leg up this year is due to higher food and energy prices following Russia's invasion of Ukraine. The impact of higher oil and commodity prices – which many EM would typically benefit from – has however largely been offset by tighter global financing conditions as central banks raise interest rates aggressively to tame inflation, which is at multi-decade highs for many countries.

But with inflation not having been this high for a generation, and after the huge changes in the structure of the economy and policymaking over the intervening period, this could pose a new challenge to policymakers. 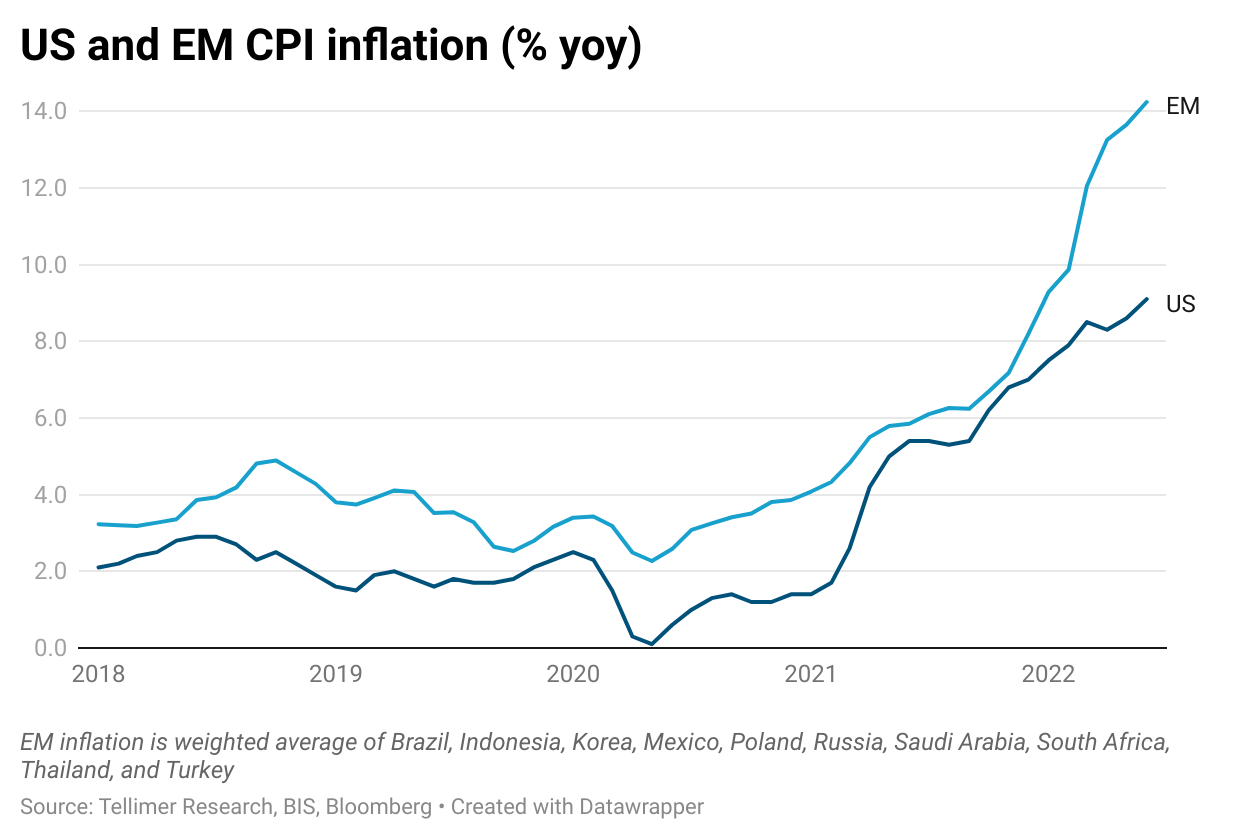 A more aggressive interest rate path in the US, as the Fed tries to get ahead of the curve, has rattled markets and raised EM financing costs while the US dollar has strengthened (DXY is up 10% this year). The outlook for the US Fed Funds policy rate has shifted from a consensus of three 25bps hikes by the end of 2022 last December, and a Fed Funds rate of 2.1% by 2024, to a terminal rate of around 3.5% (from 1.50-1.75% currently) – which would take it to its highest rate in 15 years when it reached 5.25% over 2006-07 (the post-GFC peak was 2.5% in 2019). That could present quite a shock to the external funding conditions of many Frontier issuers, many of whom have only been in the market for a decade or so, and few will have experienced conditions like these. 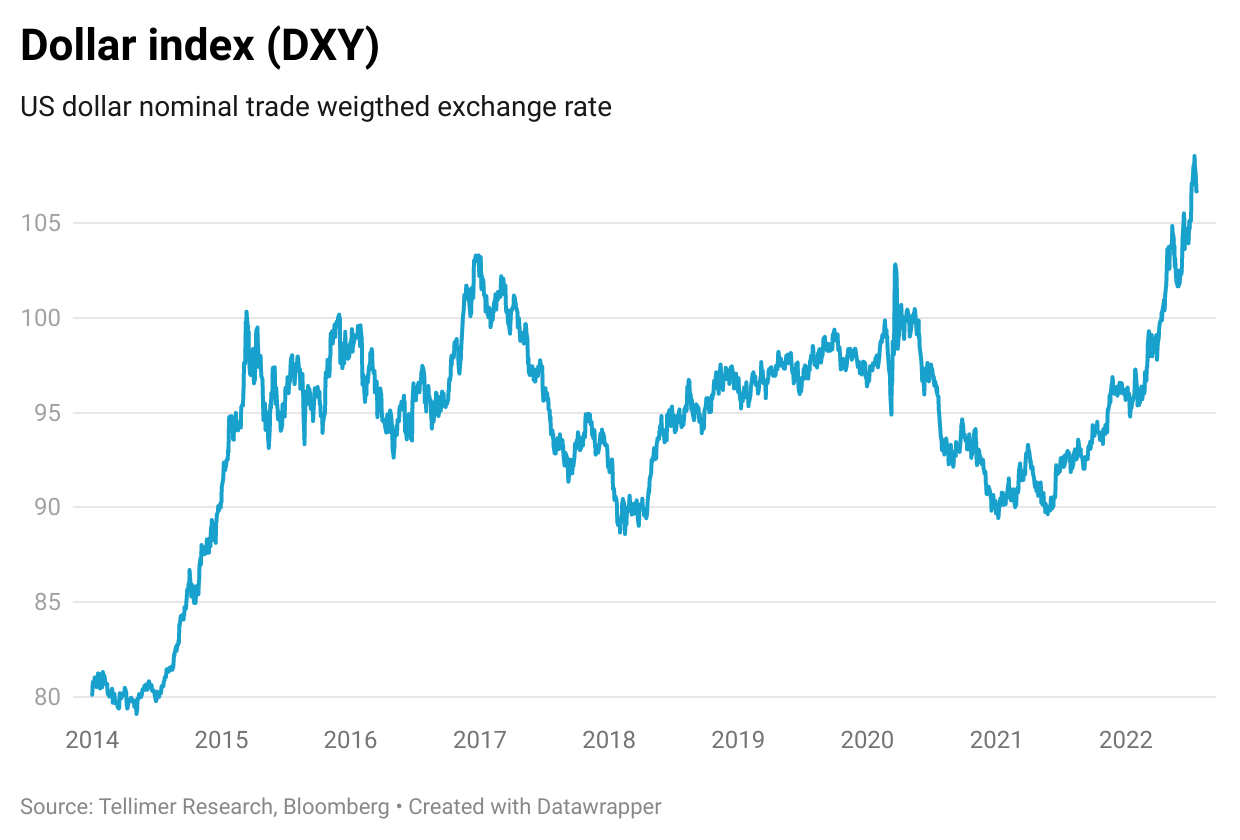 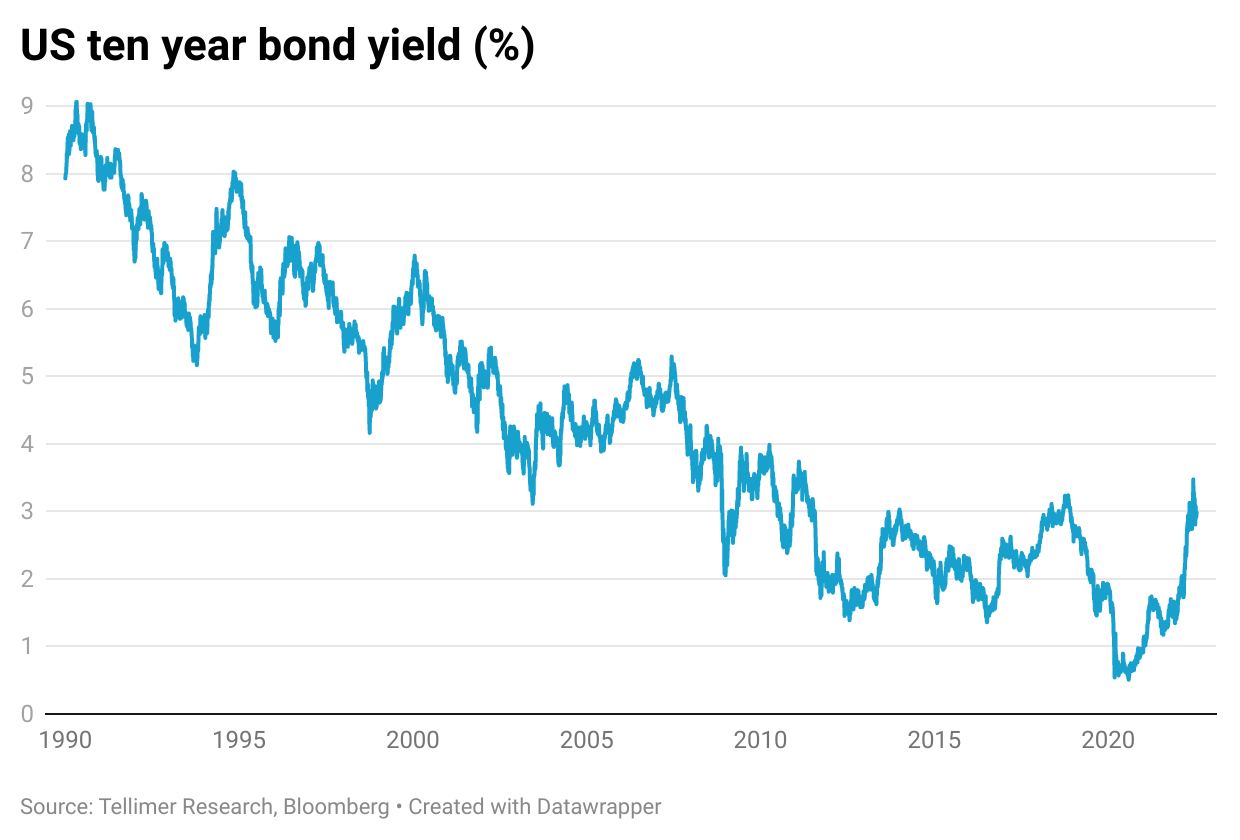 But curiously, before the Fed has even got on top of inflation, market attention has now shifted from inflation to recession, although we don't expect rate relief anytime soon. The probability of a US recession, according to Bloomberg data, is at its highest since the 2008 GFC (excluding the exceptional Covid period). However, despite all the talk of US recession, few are actually forecasting it at this stage while the implications for EM bonds of a US (and global) recession are not clear cut in our view.

Meanwhile, weaker Chinese growth, due in part to the authorities' zero-Covid policy, but also China's own real estate crisis, means it cannot pick up the baton to support global growth as it may have before. 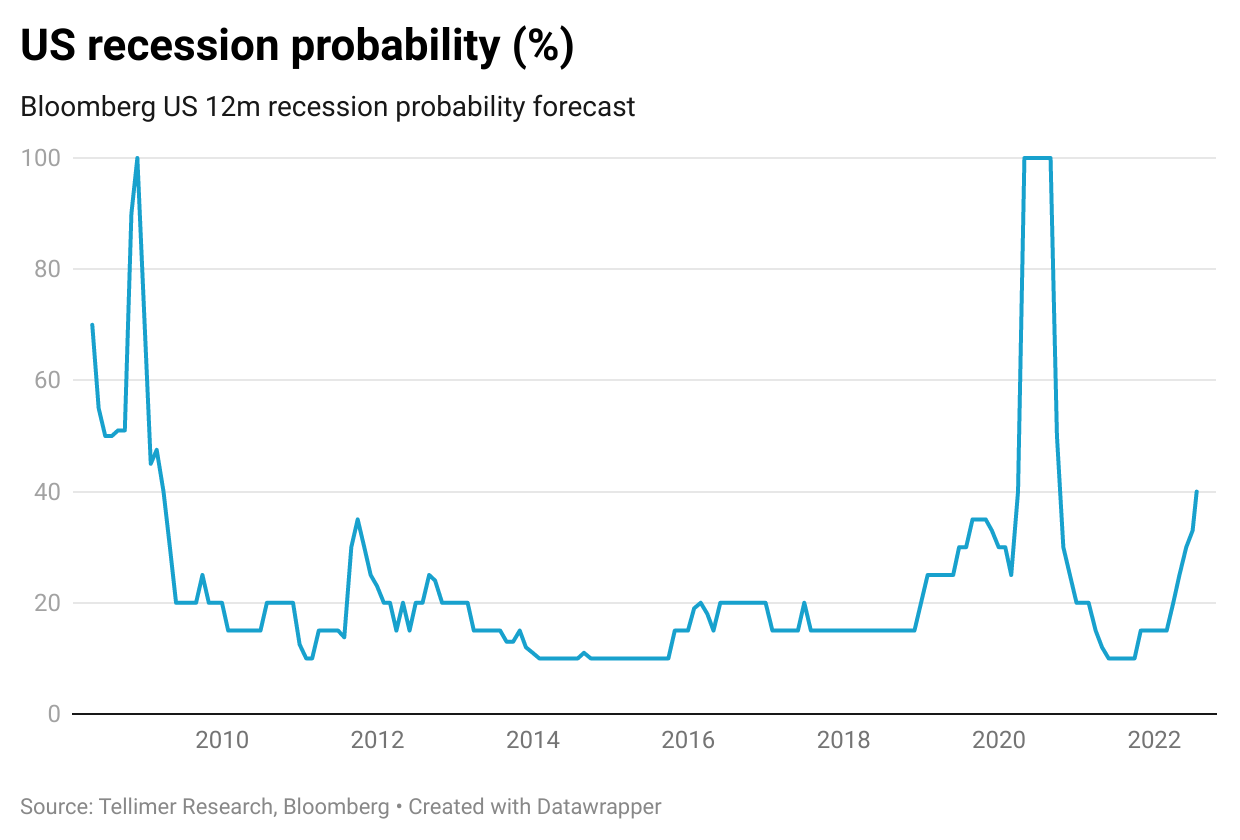 Consequently, most risk assets – including EM hard currency bonds – have had a torrid time this year in the face of the twin external shocks of war and rates.

The total return on the Bloomberg EM Sovereign USD index is -21.8% year to date (as of cob 15 July), after a terrible June (-6.3%) – the worst month this year, and the worst since March 2020 – with the yield having risen by 331bps this year to 8.15% and the spread up by 169bps to 506bps. Indeed, after a period when the spread remained fairly well contained – much to our surprise, given the global headwinds – (and so rising EM yields were really just a function of the rise in the risk-free rate), the spread has risen by more than 100bps since 6 June. The spread (the EM country risk premium) is now, with the exception of the outset of the Covid pandemic, at a post-GFC high. The spread is now 140bps above the pre-Covid (2019) average and 225bps wide of its post-Covid low.

As a result, EM hard currency sovereign bonds are on track for the worst annual performance in over twenty years (if not longer), and worse than during the GFC. 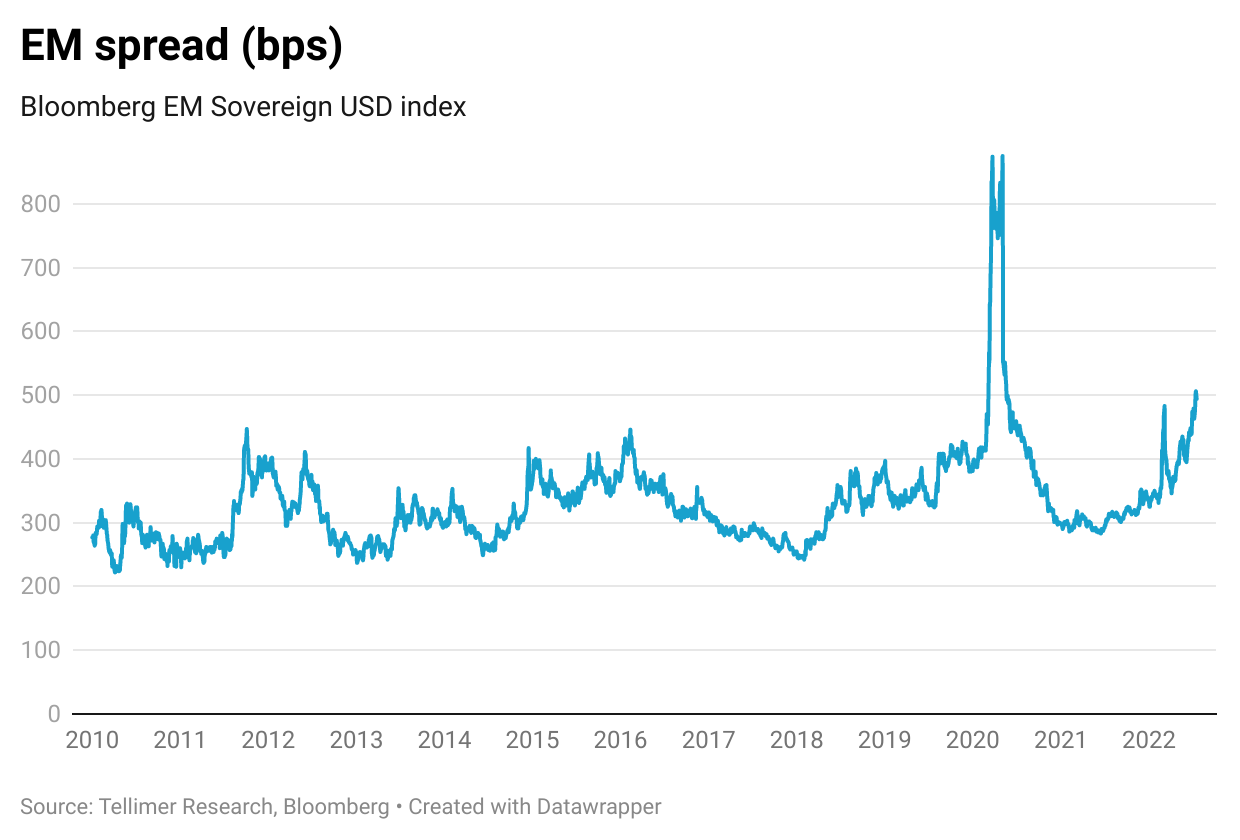 Within the overall index, HY has now outperformed IG on the downside, with a total return of -23.1% on the Bloomberg HY subcomponent compared with -20.5% on the IG portion.

There have been few hiding places, with all the country constituents in negative territory. Croatia has however been the best performer (-2.5%), perhaps buoyed by its 1 January 2023 expected euro membership. This is followed by Suriname, albeit in default (-4.3%), Poland (-4.9%), Vietnam (-5.7%) and Iraq (-5.8%). Other oil/gas exporters (Trinidad and Kuwait) have also outperformed (-6.0%).

At the other end of the scale, Russia (now in default) and its client state Belarus (flirting with default) are the worst performers, down 100% and 75% respectively in the index – and both have been excluded from the index due to sanctions. These are followed by Ukraine (-75%), amid expectations of a default (perhaps in September), Sri Lanka (-53%) which defaulted earlier this year, and El Salvador (-48%), amid expectations of a default (perhaps in January). Ecuador (-39%), Lebanon (-38.5%), Argentina (-38%), Zambia (-37%) and Pakistan (-36%) are in the chasing pack, followed by a raft of SSA issuers.

Indeed, the EM credit rout is such that nearly one-third (30%) of the Bloomberg index is in distress (defined as a spread of 1000bps or more), while we count 28 countries with yields over 10% on their sovereign dollar bonds. At these levels, many markets – not just frontiers but smaller EM too – have lost market access, which will make meeting financing needs more challenging, and/or pose a risk to those with more immediate refinancing needs (eg upcoming maturities).

Our analysis flags several countries as being particularly vulnerable to the tighter global financial conditions witnessed this year based on large gross external financing needs and lack of market access, although to be clear, some already had pre-existing concerns. These include Egypt, El Salvador, Ghana, Kenya, Pakistan and Tunisia, while of course Ethiopia is pursuing a common framework treatment (which may or may not include its bond) and Sri Lanka has already defaulted. 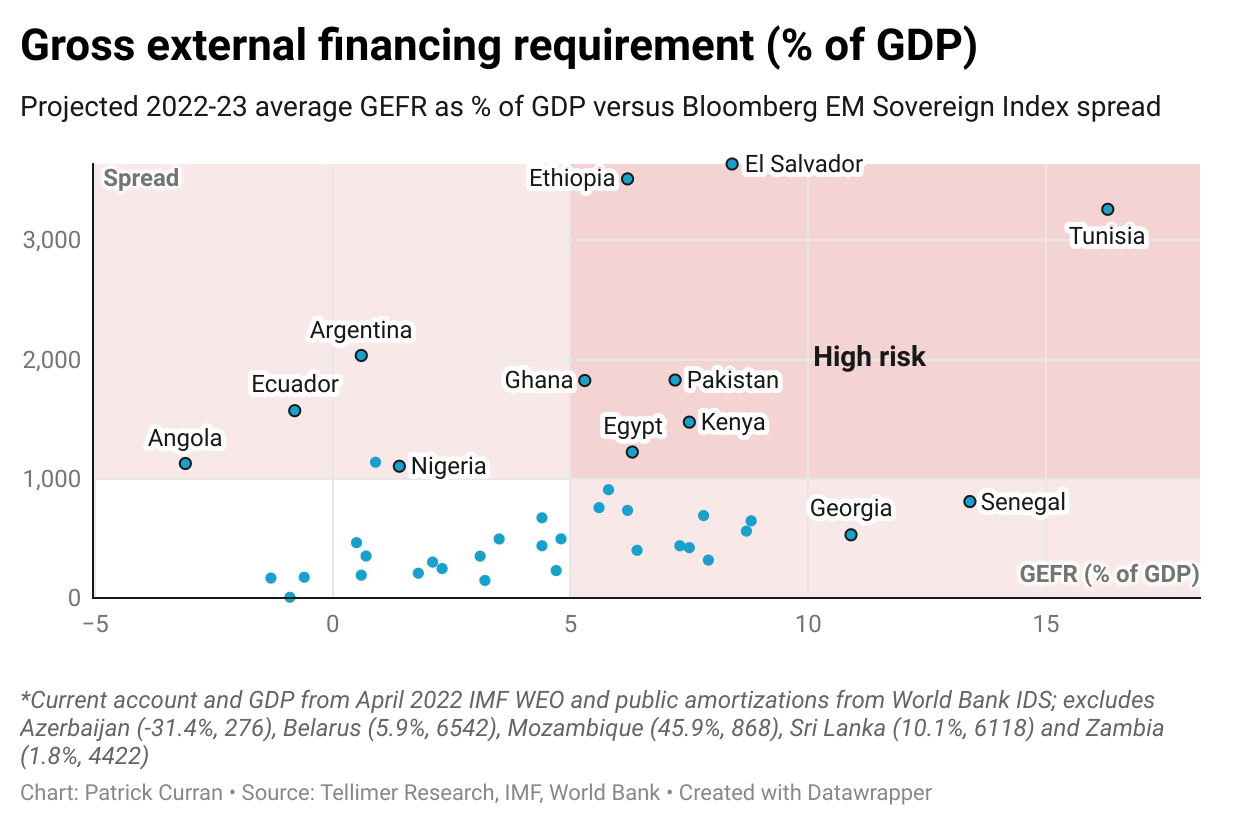 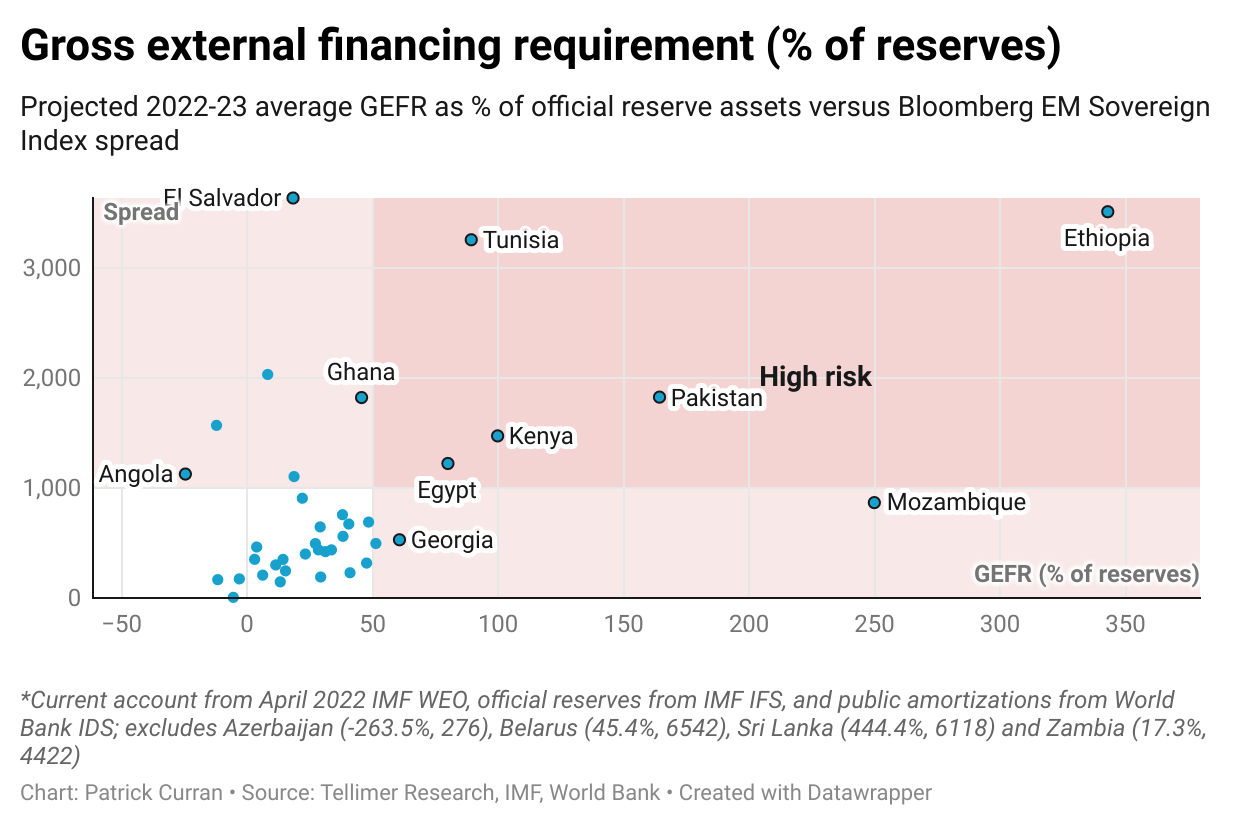 Lack of market access and high external funding needs could force more countries to the IMF (and other multilateral lenders), following Ghana's recent lead, to bilateral partners, or to consider more creative financing structures (like the Bahamas), or they will be forced to tighten policies, or to resort to potentially inflationary domestic financing, sharp exchange rate adjustments, capital controls or – in the limit – default.

This fate has already befallen Sri Lanka – the first sovereign default this year – although it was followed by Russia (which Moscow disputes). They could soon be joined by Belarus and Ukraine (however, the latter three are due to a specific set of circumstances).

In this regard, the IMF MD, Kristalina Georgieva, expressed concern about a wave of EM sovereign distress in her address to the G20's FMCBG on 16 July. That said, those seemingly most at risk tend to be smaller markets – and well flagged – so mitigating the threat of a wider systemic crisis, in our view, although investors may be concerned about domino effects and uncertainty over the international policy response. In addition, multiple simultaneous debt defaults could test the sovereign debt architecture.

Meanwhile, EM hard currency sovereign bond issuance has been subdued, with issuance in the first half of the year amounting to US$58.4bn, about 44% below the first six months of last year, and portfolio debt flows into EM have eased up considerably. Inflows in the first half of this year amounted to US$29bn (about US$5bn a month), according to the IIF, although ex-China inflows amount to US$40bn (US$6.7bn a month). This contrasts with ex-China inflows of US$209bn in the whole of 2021 (about US$17.4bn a month). Still, at least they are net inflows (there has, surprisingly, been only one month of net outflows this year, in April, although the data is subject to revision).

In addition, EM has been also been weighed down by a stronger US dollar (the Bloomberg EM FX basket has fallen by 9% ytd vs the US dollar). Weaker EM currencies could feed domestic inflation while a stronger dollar increases the local currency cost of servicing foreign currency debt. However, most of the dollar's strength has been against DM currencies, and so EM local currency has displayed some resilience (the Bloomberg EM local currency index is down 9.6% YTD in total return terms). This was driven by pre-emptive hiking of EM central banks, but could begin to reverse as rising DM rates erodes differential with many EM already having done the heavy lifting. Also with many EM now showing similar or even lower rates for LCY debt than US$ debt, this will obviously undermine the attractiveness of EM domestic debt, while investors may also shift to better liquidity in international bonds. For instance, YTW is 4.36% for Bloomberg EM local currency index versus 8.05% for Bloomberg EM hard currency index, although strictly the indices are not strictly comparable.

Yet, it is still unclear if we have reached the bottom, given the backdrop, despite the market falls so far. That said, with many EM bonds now so distressed, we think the sell-off has unlocked pockets of value, especially in higher-yielding frontier markets and smaller EM, although further weakness could be in store in the near term.