The Tri-Polar World and why the West rules, for now

“The average citizen of Oceania never sets eyes on a citizen of either Eurasia or Eastasia, and he is forbidden the knowledge of foreign languages. If he were allowed contact with foreigners he would discover that they are creatures similar to himself and that most of what he has been told about them is lies.”

George Orwell, author of 1984, in which three regional blocs are in constant conflict and shifting alliance

The Tri-Polar concept is not new; Dr Parag Khanna wrote an influential essay titled “A New Tri-Polar World Order” in advance of his book The Second World on the coming of a new tri-polar world order in 2008, not long after the global financial crisis. Khanna identified the US failure to capitalise on the post-Cold War peace dividend, and the rise of the EU and China as creating a “big three” of geopolitical superpowers. In Khanna’s words:

“Not Russia, an increasingly depopulated expanse run by Gazprom.gov; not an incoherent Islam embroiled in internal wars; and not India, lagging decades behind China in both development and strategic appetite. The Big Three make the rules – their own rules – without any one of them dominating. And the others are left to choose their suitors in this post-American world.”

However, it was my friend and colleague, Jay Pelosky, who created a structured Tri-Polar World investment strategy model, and who has written extensively on the investment implications of having three powerful and diverse economic centres of gravity. Jay described the concept in 2011 and – in light of current events – it seems more prescient than ever (emphasis added):

"The Tri Polar World (TPW) thesis argues that globalization as we knew it died in 2008 with the Great Financial Crisis. Instead, regional integration in each of Asia, Europe & the Americas will be the way forward for the global system. There are three main drivers to this regional integration: each region’s growing ability to self finance (think of the growth of China’s capital markets), self produce (think of robotics, mass customization, 3D printing) and self consume (urbanization, service sector economy and of course e-commerce). This can be expanded to the example of the Splinternet and the different regions’ attitude to climate change and ESG."

We are now more accepting of the idea of three regions with political and economic centers of gravity, their own currencies, and populations large enough to be both the producers and consumers of large quantities of products; not to mention the ability of people to buy goods and services from anywhere on their smartphones.

However, if we cast our minds back 35 years (not a long time in geopolitics), Germany – now Europe’s economic engine, and eurozone lender of last resort – was two separate and very different countries, having been smashed to pieces by WWII and cut in half by the Iron Curtain and Cold War that followed. China was a mainly agrarian, hard-line communist developing economy, where it was illegal to have more than one child and student protests were crushed with machine gun fire and tanks. There simply was no 'Europe' the way we think of it now, and there was no 'China', the way we know it now.

Putting the dramatic changes of the past three decades into measurable numbers via total GDP, the reunification of Germany in 1990 and the creation of the euro in 1999 accelerated Europe, and technology businesses accelerated the US; but it is the dramatic economic surge of China since the turn of the century that catches the eye: 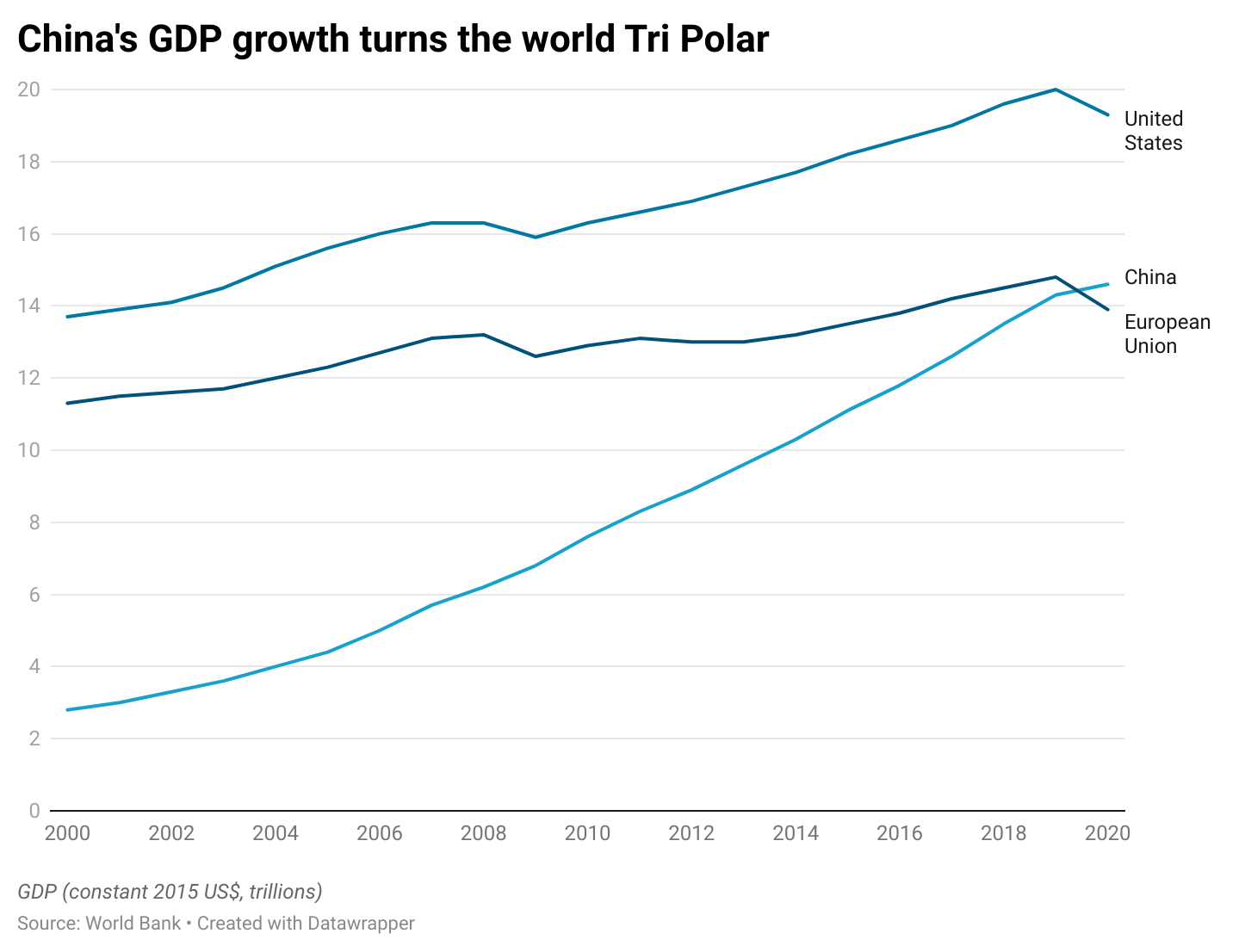 Gazing at those GDP graphs, it is impossible for economics to change so radically without political consequences.

So, you might ask why have I chosen a picture of British novelist George Orwell to head this piece. Orwell published his masterwork 1984 in 1949, towards the end of his life and not long after WWII had ended. It is a dystopian vision of a totalitarian future drawing on the ideology, propaganda and ruthlessness of Nazi Germany and the Soviet Union; the horrifying incoherence of which – where war, murder and starvation make the population “free” – becomes the “doublethink” in the book.

Orwell envisages three competing regions; Oceania (the Americas, the UK, Southern English-speaking Africa and Australasia), Eurasia (continental Europe and Russia) and Eastasia (China). Each is constantly at war with one and in alliance with the other. India and parts of Africa and the Middle East appear to be contested. With wry wit, Orwell renamed the UK “Airstrip One”, being an outpost of Oceania dominated by North America; even then, there was a sense that the UK never really felt European, and Brexit made Orwell seem right.

In my last Scriber essay, I noted the UN General Assembly vote to condemn the Russian attack on Ukraine, and who voted in support and who didn’t. At that vote, all of Orwell’s Oceania voted to condemn Russia, as did all of his Eurasia (except Russia itself); while China, India and much of Africa abstained. The UK’s Foreign Secretary Liz Truss, and her Russian opposite number, Sergey Lavrov spent time in New Delhi recently trying to persuade India to see the Ukraine conflict from their perspective. That feels like a contest to me. The overlap with Orwell’s vision and the new Tri-Polar economics and geopolitics is alarming.

The West rules, for now

In the real 1949, the West (Orwell’s Oceania) had won, and won irrevocably, it seemed. When Orwell wrote his masterpiece, New York was the biggest city in the world and London was third. Eurasia featured in the top list by virtue of Paris and Moscow. By 2015, New York had dropped to ninth on the list, and Shanghai risen to third. The rest are in Eastasia or the contested regions; Paris and Moscow were out of the top 12 list altogether.

City size is just one indicator of economic and social development, albeit a stark indicator of change. Ian Morris professor of Classics at Stamford University constructed an index system for measuring social development across all of human history, beautifully described in his superb 2011 book Why the West Rules, For Now. Professor Morris sets out the path of humanity in terms of that index system, with West (Western Europe and ultimately the US) compared with East (China), and the levels of observed development in each. Western culture has ups and downs with the rise and fall of classical empires until it hits a high of 42 index points at the apotheosis of the Roman Empire in the 4th century. The next time humanity would reach 42 points was more than 1,400 years later with the start of the Industrial Revolution in Britain. In the intervening period, the East overtook the West with the great civilisations of China, but industrialisation caused the West to leap ahead and stay there until the time of Morris’s book, just. By the time Morris wrote, the West was at 1,000 index points; even the less mathematically minded of you will realise that represents an exponential growth since 1750. To reinforce the point, the world’s human population has more than doubled in my lifetime, and more than quadrupled in the past century.

So, on a social development basis and on total GDP, China looks like it is overhauling Europe and catching the US. Would this make China more likely to follow Russia’s lead and take back Taiwan or other disputed territories?

On closer examination, the West still has some economic advantages that should give China pause for thought, and further strategic objectives to reach: 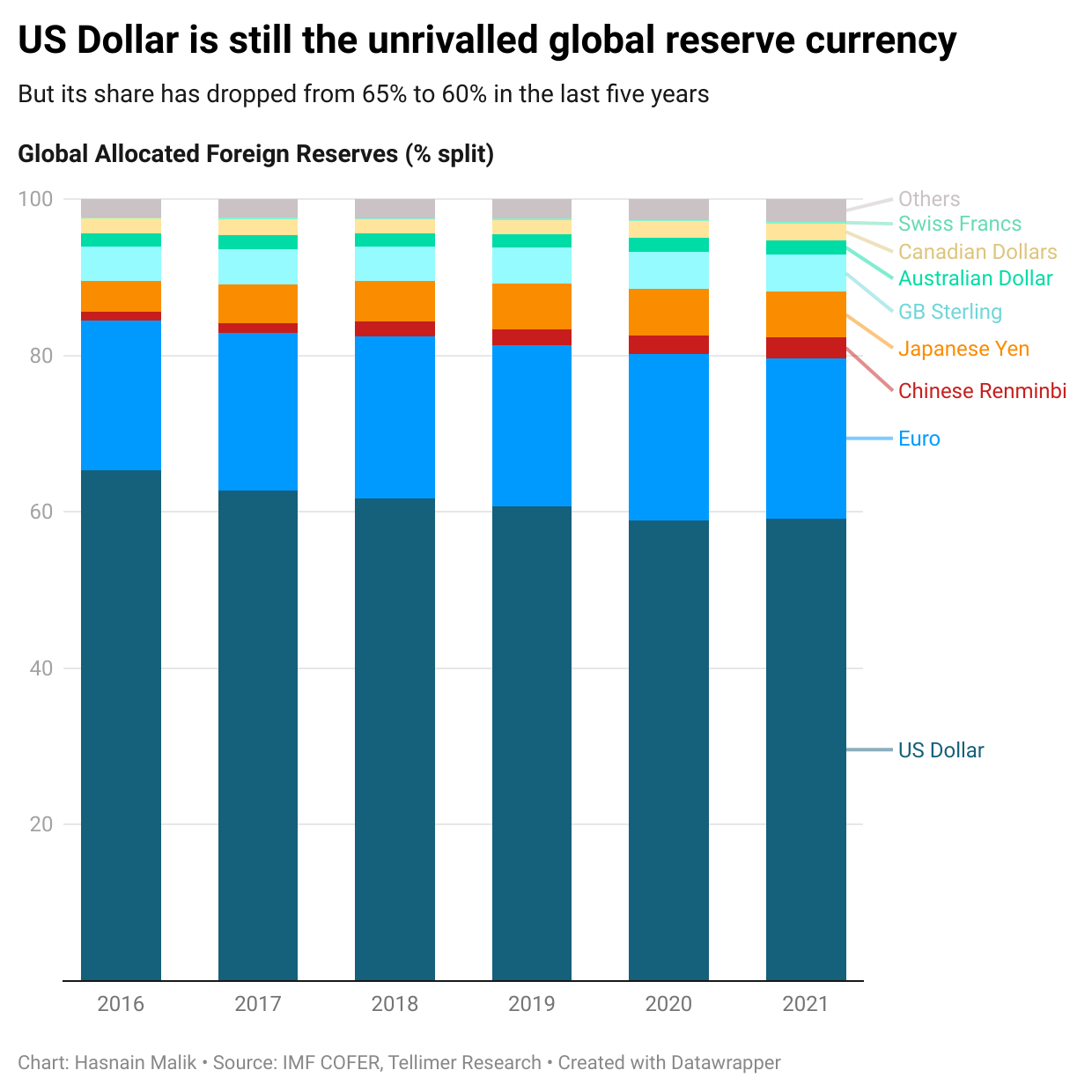 As the Western powers have shown by the sanctions imposed on Russia, these advantages are still real enough to exert significant economic pain. However, there are some areas where matters are more balanced:

The Tri-Polar World appears to be upon us, seemingly the consequence of the end of globalisation. The collective West’s ability to impose robust economic sanctions against Russia shows why it still rules, for now. Although Orwell imagined regions where the populations are cut off from each other, the reality is that modern technology and communications give us all much greater connectivity. That said, the same technology makes promulgating misinformation much easier, and China is effectively building the 'splinternet', a Chinese-only version of the web, with carefully managed search results. 1984, which seemed for so long like a book of its time and superseded by events, is perhaps worth another read.

This "Perspective Pool" report was first published on Scriber, the only email newsletter & web publishing platform built for finance experts, by finance experts.