The success of COP26 depends on China and the US: the rest are onlookers

The purpose of COP26, the UN Climate Change Conference from 31 October to 12 November, is for countries to update their national targets ("nationally determined contributions" or NDCs) to close the gap between the shared ambition of the 2015 Paris Agreement on climate (restrict global warming to well below 2°C) and individual country plans.

COP26, is a great opportunity for those in finance who have refashioned their careers under the banner of ESG to claim the limelight and for institutional funds marketed under the ESG banner to remind customers of their offering.

It is also a chance for many politicians, including host PM Boris Johnson, to burnish their reputations as guardians of the planet, for the benefit of their domestic political base.

Glasgow hoteliers and restaurateurs are no doubt also rubbing their hands in gleeful anticipation over the visit of 20,000 delegates and over a hundred heads of state, no doubt with entourages in tow.

Stripping the fanfare (and cynicism) away, what matters most in COP26 is what, if any, new commitments are made by China and the US, and to a lesser degree the EU (it is a much smaller greenhouse gas emitter). Their existing targets (NDCs) are as follows:

The populous areas most vulnerable to climate risks, under current conditions, are overwhelmingly in emerging markets.

There are 43 cities in India, 37 in China, and 99 in Asia in the top 100 cities most at risk in the Verisk Maplecroft Environmental Risk Outlook 2021 report, which scores the largest 576 cities globally. Outside Asia, cities such as Jeddah, Istanbul, Lagos, and Lima are classified as high risk.

Furthermore, in the same report, cities in emerging markets dominate those most vulnerable to climate change (higher temperature, increasing incidence of droughts and flooding); eg Jakarta, Lagos, Karachi, and Manila,

While emerging market cities are most exposed to climate risks, the driver of effective climate control boils down to combined global leadership between two countries: China and the US. These two countries collectively account for 45% and 25% of global greenhouse gas emissions and plastic waste, respectively. 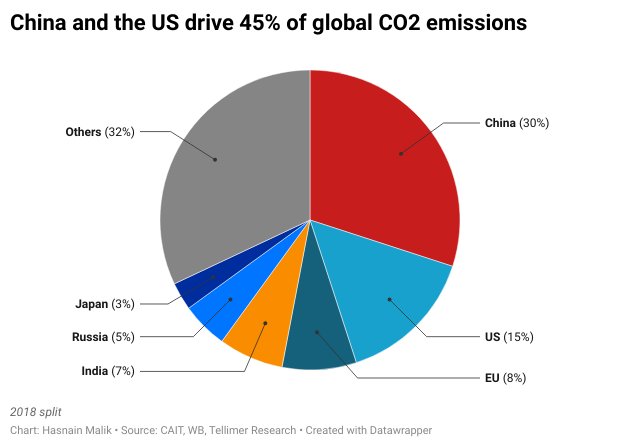 The precedents of non-cooperation between China and the US from so many other aspects of global geopolitics in recent times – trade, security, Covid – and the continuation of this divergence after the US presidential change from Trump to Biden, do not suggest either is in the mood for compromise.

There is less ideological difference between China and the US over the principle of climate control than on these areas of non-cooperation. But given there are short-term economic and competitiveness costs associated with climate control measures – eg shuttering fully depreciated coal power generation in the transition to initially more expensive renewables, initial subsidies for electric cars and charging infrastructure, reforestation etc – there is an incentive for individual countries to delay these measures for as long as possible (the “prisoner’s dilemma of global climate control”).

At the time of writing, it is unclear whether President XI Jinping will attend COP26 in person – he has not travelled overseas since before the Covid pandemic. President Biden is expected.

China's commitment to climate control should not be judged by whether Xi attends or by its aggregate emissions, which is a result of massive population and the economic growth and industrialisation of the past three decades.

More meaningful are metrics such as its decelerating per capita emissions, its declining per unit of GDP emissions, and its increasing forestation. Below, we compare China and US across a range of climate control metrics.

Furthermore, China's pledge for carbon neutrality by 2060, made in September 2020 and practically embedded in the 2021-25 Five-Year Plan, implies 30 years from peak emissions in 2030 to neutrality in 2060, a shorter time period than the 40 and 70 years implied by targets from the US and EU, respectively.

The 'E' in ESG: 4 charts on plastic waste in emerging markets, October 2021

The 'E' in ESG: 4 charts on water stress and deforestation in emerging markets, October 2021

ESG needs to focus on countries, not just companies, October 2021