Oil is under pressure as we start the new week, with Brent futures dropping below $103 per barrel and WTI slumping to $94 per barrel. Oil prices dropped for a third straight week last week and have continued those losses today as global economic growth concerns outweigh a tight market at the moment. We also had the restart of flows at the Keystone Pipeline in the US on Friday following a brief outage, which added some downside pressure to the market.

Looking ahead, focus will be on the Federal Reserve meeting this Wednesday. Another large interest rate hike is expected from the FOMC, which will continue to crimp demand and impact economic dynamism in the US. While this is largely priced in already, it will still be a downside risk to oil markets. Traders will also be watching some other key data such as US GDP and some more up-to-date figures such as durable goods orders and economic confidence numbers out of both the US and Europe. After last week’s weak PMI figures, any downside surprises in the numbers will weigh on oil prices amid expectations of lower demand.

Base metals are on the backfoot at the start of the week with investors expressing concerns about a slowing global economy. Weak growth in China and the United States has relegated base metal bulls to the sidelines, for now the tailwind of infrastructure projects and green energy solutions has faded, it has however not disappeared and we do not expect the same level of negativity as seen at the start of COVID-19 to permeate the metals markets.

Ghana: The Bank of Ghana (BoG), Africa's second-most aggressive central bank, will deliver its latest verdict on its policy rate today. The BoG has hiked by 450bps this year, and risks are tilted in favour of another rate hike, given inflation is at its highest level in almost 19 years and has exceeded the upper limit of the BoG's 6-10% target range for ten months. Moreover, risks to the inflation outlook are tilted to the upside amid a weaker currency, a sustained increase in producer prices, and an unfavourable external environment. However, a weaker domestic growth environment could support the argument for an unchanged decision.

Ghana: Data from the BoG showed that Ghana's total debt stock rose by GHS 130mn to GHS 393.4bn or 78.3% of GDP in June. This compared to GHS 392.1bn (78% of GDP) recorded in March. In dollar terms, the country's debt dropped slightly to $54.4bn in June from $55.1bn in March. A closer analysis of the data shows that Ghana did not borrow fresh funds in Q2. The domestic debt remained unchanged at GHS19.01bn, equivalent to 37.8% of GDP. Meanwhile, the external component of total public debt went up marginally to GHS 203.4bn in June from GHS 201.9mn at the end of Q1 due to exchange rate fluctuations. The Ghanaian cedi remains the worst performing African currency against the USD, down by over 26% on a year-to-date basis.

Ethiopia: Diaspora remittances in Ethiopia reached $4.2bn during the 2021/2022 fiscal year that ended on July 7. This compared to $3.6bn remitted in the 2020/21 fiscal year. According to the Ethiopian Diaspora Agency director, the remittances recorded during the past fiscal year exceeded the target set for the period by $200mn. Going forward, rising foreign remittance levels may help ease the foreign currency shortage challenges Ethiopia is struggling with.

Mauritius: In a recent interview Bank of Mauritius Governor Harvesh Seegolam signalled tighter monetary policy in the coming months after slashing the benchmark rate to a record low in 2020. Recall that the bank has shifted to tightening monetary policy this year by increasing the benchmark repo rate by 40bps to 2.25% over two meetings. According to Seegolam, the quantum of increases will be driven by domestic realities rather than mirroring the global trend. Seegolam further said, "We will be less and less accommodative as the economy recovers. We are already on a journey of normalization." The Governor also noted that the normalization process would coincide with the rolling out of a new policy framework. The new policy framework is expected to anchor inflation expectations for the medium- to long-term, and the bank is "considering a move from the current key repo rate to a new policy rate."

Morocco: Headline inflation in Morocco surged to 7.2% y/y in June from 5.9% y/y in May. This was the fastest pace of price growth in the economy, according to Bloomberg data going back to January 2008. On a month-on-month basis, consumer prices climbed 0.5%. Food prices inflation rose by 10.6% y/y while non-food price inflation increased by 4.9%. The acceleration in inflation is likely to test the central bank's policy stance going forward after policymakers in June kept the benchmark rate at a record low of 1.5% as they sought to encourage borrowing and boost the economy. The central bank expects inflation to moderate next year as the effect of imported items recedes. That said, the bank has indicated that it will review its options regarding the main rate only if domestic prices are leading to a surge in inflation.

Nigeria: According to Finance Minister Zainab Ahmed, Nigeria could spend up to NGN 6.72trn ($16.2bn) next year if it keeps the fuel subsidy in place. Ahmed added that the government was working with two scenarios, one that assumed a "business-as-usual" approach where a subsidy would be in place for the whole of 2023 and would cost the federal government NGN6.72trn. The second option "assumes that petrol subsidy will remain up to mid-2023, in which case only NGN3.36trn will be provided for." The International Monetary Fund and World Bank have repeatedly urged Nigeria's government to remove the costly subsidy on gasoline, which has weighed on the country's public finances. 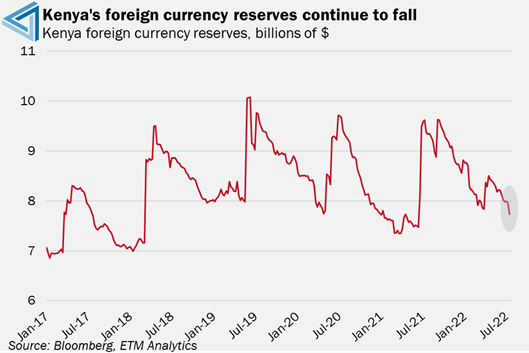 The shilling has remained on the back foot against the USD this year, losing almost 5% amid factors such as deteriorating terms of trade, a widening current account balance, limited inflows, rising fiscal risks, and election-related uncertainty. Since the May 2021 high of KES 106.56 per dollar, the shilling has depreciated by over 11%.

With dollar demand expected to continue exceeding supply, the outlook for the KES remains gloomy. That said, reduced market activity ahead of the August 9 polls could ease the selling pressure at the margin. This week, the direction of the USD/KES is likely to be determined by the outcome of the FOMC rate decision on Wednesday evening.

Although international oil prices remain lofty, Nigerian Eurobonds have come under considerable selling pressure in recent months as concerns over the country’s fiscal outlook intensify. Oil revenues have plunged, resulting in lower tax receipts. According to Finance Minister Zainab Ahmed, Nigeria’s government revenue of NGN 1.63trn in the four months through April was 49% below target and was mainly due to oil earnings missing forecasts. Oil earnings stood at NGN 1.23trn, 61% below the budget forecast for the period.

The latest figures from OPEC showed that Nigeria’s crude production plunged to 1.2mn barrels per day in June, the lowest production level in more than three decades. This compares to peak production of almost 2.5mn bpd in the early 2000s. The sharp drop in production is a function of pipeline vandalism, theft and lack of investment in the sector. The missed oil production forecasts caused the government to downwardly revise its 2022 growth forecast to 3.55% from 4.20%, previously. 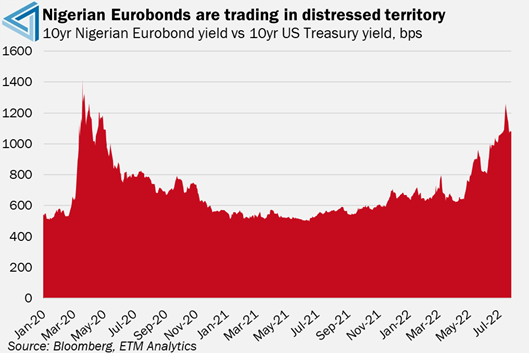 While Nigeria’s 2032 Eurobond yield has pulled back from its recent peak, the spread between the 10yr Nigerian Eurobond and the comparable US Treasury yield sits above 1000bps, a level associated with countries in fiscal distress. While fiscal risks in Nigeria have risen sharply in recent years, it is worth mentioning that Nigeria’s total debt pile is modest in comparison to many of its African counterparts. As such, the risk of a full-on debt crisis is unlikely. That said, investors should continue to closely monitor fiscal metrics such as revenue to debt service costs to get a sense of the pace of fiscal degradation.

Macroeconomic: The outlook for Nigeria’s mining sector is cloudy

According to Bloomberg, the Nigerian government is considering suspending mining in the country as it is being used to finance rebel attacks. It has been noted that terrorists have moved from conventional means of funding to mining and ransom-taking. 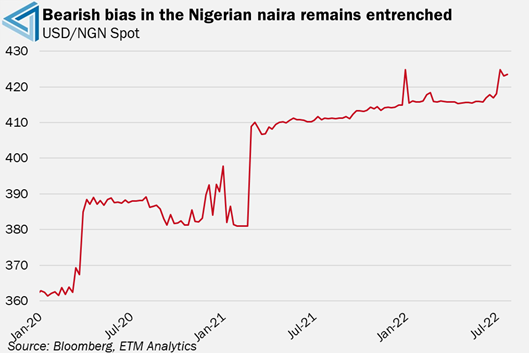 The government will have to put a lot of thought into how they come up with a solution to this problem. It is a very delicate situation, as the country is highly dependent on mining, and to suspend it will likely increase social unrest and detract from the performance of the economy. The implementation of mining restrictions would likely have a negative impact on the naira, which remains under pressure.

It is worth mentioning that there are massive untapped mining opportunities in Nigeria. However, there is a lot of concern over investing in new mines in the country due to instability in these resource-rich regions. Nigeria’s latest plan to restrict mining activity to prevent insurgents from getting funding is unlikely to solve the situation entirely. That said, the government does need to restore stability across the country to narrow the output gap and boost investment in the country. An increase in mining will give Nigeria the ability to export more and diversify away from the oil sector.