The pummeling of the Rand continues, Zambia puts pressure on creditors

Oil prices are back under pressure this morning, keeping the up-down trading going while heading for a weekly loss. The commodity is being weighed down by demand concerns out of China and a hawkish Federal Reserve. Fed Chair Powell yesterday signalled that the central bank could implement at least two 50bp hikes this year. Not only has this boosted the USD, making commodities more expensive, but it will weigh on the demand outlook for the US over the longer term, with the recession probability for the next six to nine months still looking fairly elevated.

Meanwhile, China has vowed to step up the enforcement of lockdown measures in Shanghai, despite expectations that restrictions could be eased as the situation seemed to be improving. As a result, Chinese growth forecasts have been lowered again, denting the outlook for oil demand from the world’s top consumer. This weaker demand outlook has seen timespreads across the futures curve narrow, with Brent’s prompt spread at just 39 cents a barrel this morning. The price of the front-month contract, meanwhile, is trading just above $107 per barrel at the time of writing, with the 50DMA support at $106.57 a key level to watch.

Zambia: Finance Minister Situmbeko Musokotwane said in a webinar on Thursday that the government has done that it needs to start restructuring talks over its more than $17bn of external debt. The Finance Minister said that creditors now need to participate. Zambia is using the G20’s Common Framework, a program introduced in 2020 to provide debt relief for heavily indebted countries, to restructure unsustainable debts. Zambia was one of the first countries to adopt the Common Framework, which has up until now been fruitless. Finance Minister Musokotwane said, “we’ve come here to complain and also to discuss with the leaders of the G-20, with the leaders of the Common Framework: You made a commitment, we also made a commitment,” adding “we have lived up to our part of the commitment in terms of implementing those things we agreed we’d do.” Zambia’s slow progress in restructuring its external debt, of which China and Chinese lenders account for around one-third, is one of the main factors holding up a $1.4bn bailout program with the International Monetary Fund. Recall that the IMF program has already been approved at a staff level and now requires the commitment of privates creditors. From a financial market perspective, investors are banking on the country securing a deal with the IMF. Should the government fail to secure a deal over the next 6-9 months, it will likely result in a notable sell-off in domestic assets. Our base case view is that the government will secure a deal with the IMF before year-end.

Morocco: The Moroccan government announced this week that it would invest $1.1bn into 15 public and private sector projects, a move to stimulate economic growth and create almost 3000 jobs in the economy. According to the press release, the ministerial commission allocated roughly MAD 5.7bn to investment projects in the telecommunications sector, amounting to 53% of the overall budget. Industry came second with a total of MAD 3.2bn worth of investment. The agency said the bulk of the investment went to public or semi-public projects, which accounted for MAD 9.2bn. The Moroccan government stressed the importance of boosting investment to support the economic recovery and generate jobs.

Ivory Coast: President Alassane Ouattara appointed a narrowed-down government of 32 ministers this week, down from 41 previously. The heads of defence, finance and foreign affairs remained unchanged. While much of the cabinet remains unchanged, the president named a new mines minister. The minister of mines and energy was replaced with former agriculture minister Mamadou Sangafowa Coulibaly. President Ouattara is in his final term and is expected to step down at the end of his third term in 2025 when presidential elections will be held.

Uganda: The Uganda Shilling ended yesterday’s session marginally firmer against the USD. The modest recovery in the UGX came despite a rebound in the USD amid limited dollar demand from corporates on the day. Traders noted that money markets remain fairly liquid, with overnight yields averages at around 6.85%. Pulling back the lens slightly, while it has been a volatile start to the year for the UGX, the Shilling remains one of the most resilient African currencies.

Nigeria: With inflation fears still elevated amid ongoing supply-side price pressures, it is worth casting an eye on the latest money supply and credit data, which we use as factors in ETM’s Inflation Risk Model. Data released on Thursday showed that M2 money supply growth accelerated from 17.6% y/y in February to a 9-month high of 19.20% y/y in March. Meanwhile, growth in private sector credit extensions slowed from 18.0% y/y in February to 15.7% y/y in March. On balance, current monetary dynamics against the backdrop of robust external price pressures and a fragile Naira suggest that inflation risks in Nigeria remain firmly to the upside.

Nigeria: Nigeria plans to reopen a 10-year bond maturing in 2025 and a 20-year bond maturing in 2042. The Debt Management Office said on Thursday that it plans to sell NGN 75bn of each bond at an auction on April 25. As always, the auction results will be closely monitored to gauge demand for Nigerian sovereign debt. Investors will also closely monitor the clearing yields at the auction.

The focus heading into the final session of the week is squared on the South African Rand. This week has been a blood bath for ZAR bulls, with the currency significantly underperforming its emerging market and African peers. The ZAR has lost around 5.0% over the past three sessions and is currently trading above the 15.40 mark, its weakest level in more than a month. While at first glance, there appear to be no key drivers behind the sell-off in the ZAR, with the USD under pressure, providing a tailwind for the broader emerging market currency basket, there are a number of underlying factors that are contributing to the recent bout of ZAR weakness.

Firstly, Barclays has sold half of its stake in ABSA, a sale of more than R10bn. These funds are likely being expatriated into hard currency taking advantage of the ZAR's recent overvaluation on a real-effective trade weighted basis. Gold is also weaker, which will be compounding pressure on the ZAR, as we are a net exporter of gold. The announcements of load shedding and the backlog of exports at the Durban Port due to the severe storms in KZN are adding further pressure to the rand to leave it on the defensive heading into the weekend. 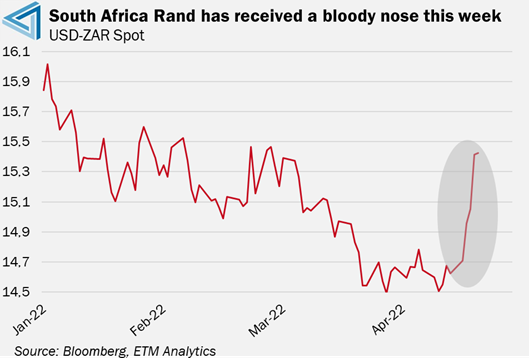 It is also fair to say that the latest bout of ZAR weakness is too short and sharp to be sustained. The move is likely the result of outflows related to the sale of the Barclays stake in ABSA and they will pass. If so, this is nothing to be overly concerned about and carry trade investors would not want to trade too bearishly on such information given the backdrop of high interest rates, the commodity link and the inflation differential that remains in the ZAR's favour. Although one could argue that this latest move in the ZAR is long overdue, readers would do well to monitor whether the tailwinds that have helped the ZAR to recover since the start of Dec 2021 as they remain intact.

Finally, after such a brutal sell-off, many stale short USD positions have now been cleared out. Although investors will be wary of re-establishing short positions given the volatility, some stability is expected to return. However, technical analysis reveals that levels closer to 15.50 might be tested before that unfolds and so investors are advised to proceed cautiously.

While much of the focus for fixed-income traders is centred on monetary policy amid surging global inflation and the hawkish pivot from central banks to combat soaring consumer prices, fiscal dynamics continue to play an integral part in the pricing of sovereign bonds.

According to the market-discipline hypothesis, bond yield spreads over an appropriate benchmark bond signal the financial market's assessment of the sustainability of a government’s fiscal policy. Generally speaking, weak fiscal discipline and rising credit risk are reflected in higher borrowing costs for governments. 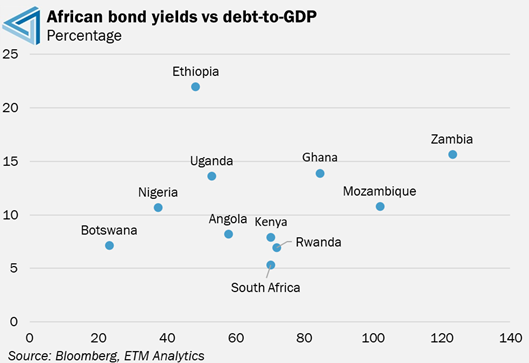 The accompanying chart provides an overview of African sovereign bond yields relative to their respective debt-to-GDP ratios, a measure of a country’s fiscal position. Given the limited debt issuance in Africa, we have had to make some compromises when constructing the accompanying chart. For the most part, we have used 6-9yr Eurobond yields, but in instances where the bonds were not available, we have had to use shorter-dated bond yields or local currency bond yields in the case of Botswana and Uganda.

While this isn’t ideal, it does provide a sense of the fiscal premia priced into the respective sovereign bonds relative to the country’s debt position. South Africa is a clear standout on the chart, given that South African bond yields are trading notably lower than many of its African peers with lower debt-to-GDP ratios. This is essentially a function of how developed South Africa’s bond market is. The depth of a financial market and the liquidity of a bond market also contribute to the pricing of a country’s bond yields.

In the wake of the covid pandemic and, more recently, the war in Ukraine, which have both had a devastating impact on Africa as a whole, the World Bank has announced plans to create a $179bn financing package for member countries. World Bank President David Malpass said this week that the lender is working to make available $50bn as part of an initial crisis response by the end of June.

Ghana is one of the many African country’s that stand to benefit from the planned World Bank program. While Ghana ended last year on a firm footing, its economy has come under severe pressure at the start of 2022 as tighter monetary policy, soaring inflation, ongoing supply chain issues and heightened fiscal risks weigh on activity.

David Malpass said in an interview that developing countries are facing multiple overlapping crises, including the pandemic, rising inflation, Russia’s invasion of Ukraine, large macroeconomic imbalances, and energy and food supply issues. The World Bank head noted that the crises are resulting in massive reversals in poverty reduction, education, health and gender equality.

Sticking with Ghana, the World Bank has called on the West African nation to implement stringent reforms to attract investment from both citizens and foreigners. The looming fiscal crisis, the sharp depreciation in the currency, and multiple rating downgrades are pushing Ghana’s economy into a position of distress. While the government has announced some measures to boost tax revenues and cuts to expenditure, we remain of the view that more drastic measures need to be implemented.