The latest edition of the World Bank's Global Findex database highlights where financial inclusion is advancing most, and where improvements are more muted. In this report, we focus on the trends across 40 emerging markets. Over the past decade, one-third of adults in these countries have transitioned from being financially excluded to financially included, a sizeable increase with significant benefits for these individuals and the broader economy. Moreover, the pace of improvement is accelerating, reflecting the role of technological and behavioural changes.

The key drivers of better financial inclusion include the increasing availability and acceptance of mobile money channels, e-commerce and digital bill payments. Policymakers tasked with improving access to finance would do well to facilitate the provision of such services. Traditional products (such as bank savings/ loans or debit/ credit cards) are much less effective.

In this report, we also highlight the country leaders and laggards concerning recent financial inclusivity improvements.

Over the past decade, the median level of financial inclusion (defined as the percentage of people aged 15+ having bank accounts or using a mobile money service) has risen from 42% to 74% across our sample of 40 emerging markets. In recent years, improving mobile money provision has been one of the leading drivers of this increase. 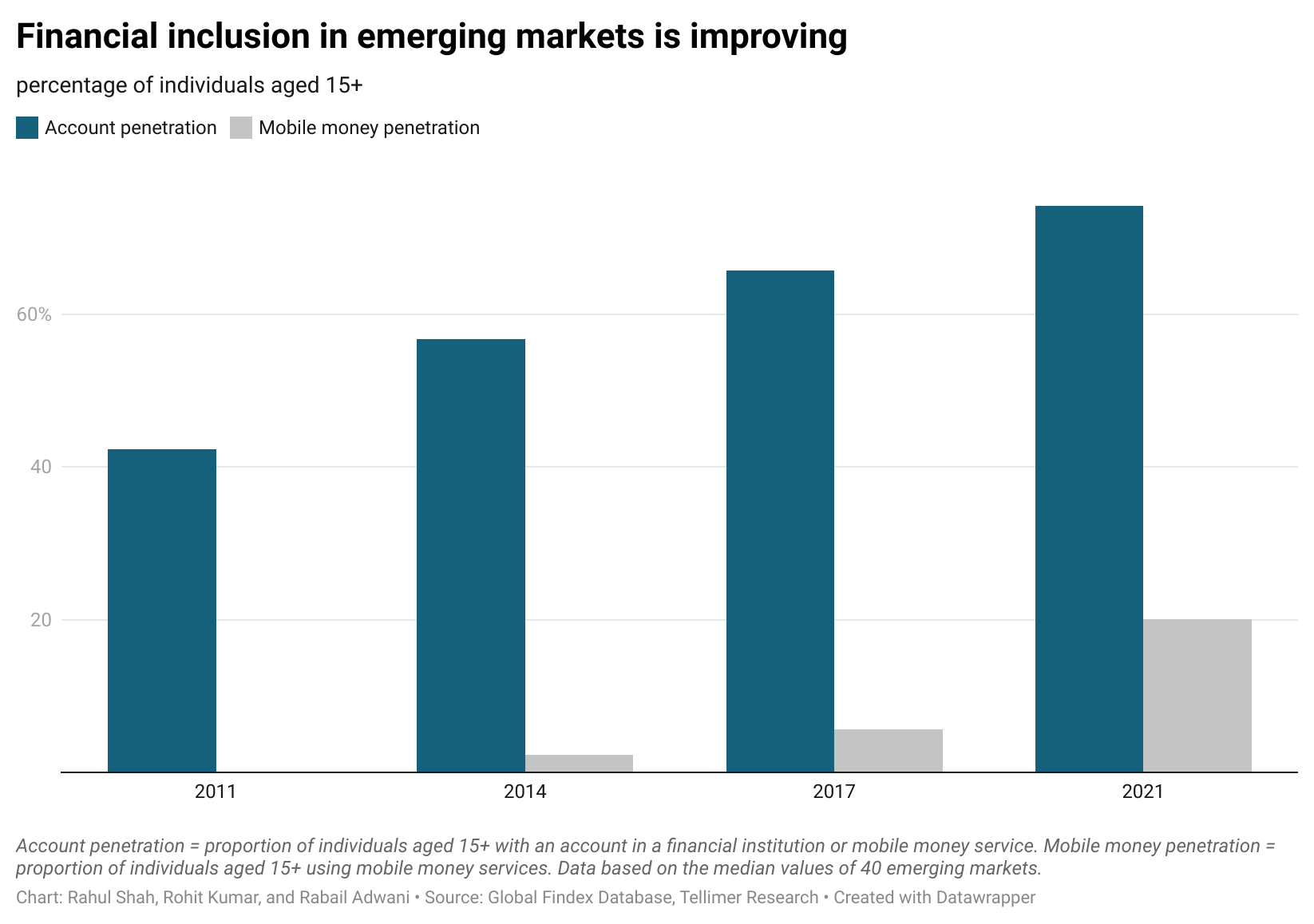 Other products that have helped drive better financial inclusion in these markets include digital payments, encompassing both online purchases and bill payments. Bank savings and loan products have been much less effective. For example, between 2017 and 2021, over 10% of the adult population started using digital payments, but the proportion having access to a bank loan was stagnant. 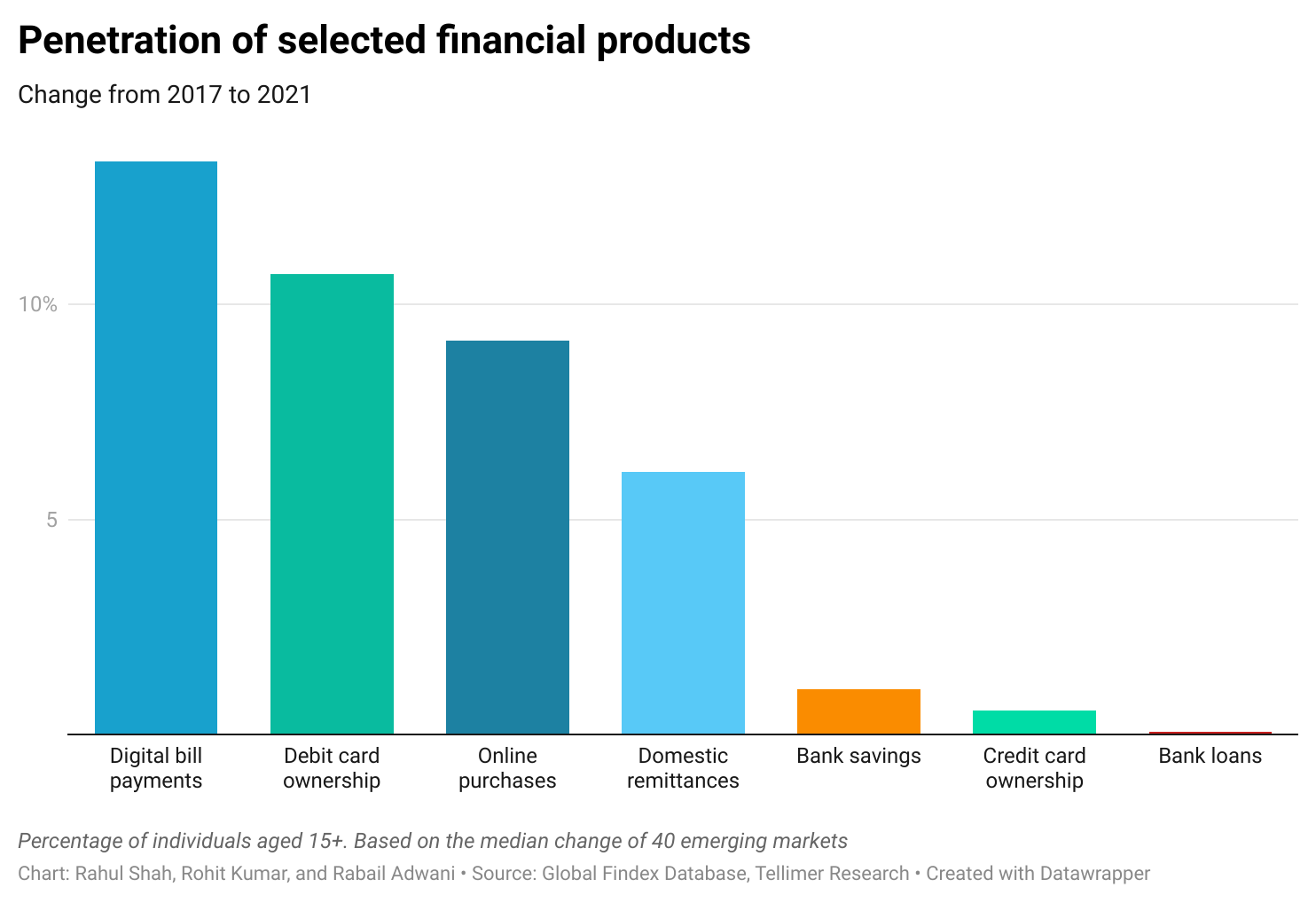 The countries seeing the greatest deepening of financial inclusion

We highlight below the ten emerging markets (from our sample of 40) that saw the best improvements to financial inclusion between 2017 and 2021: 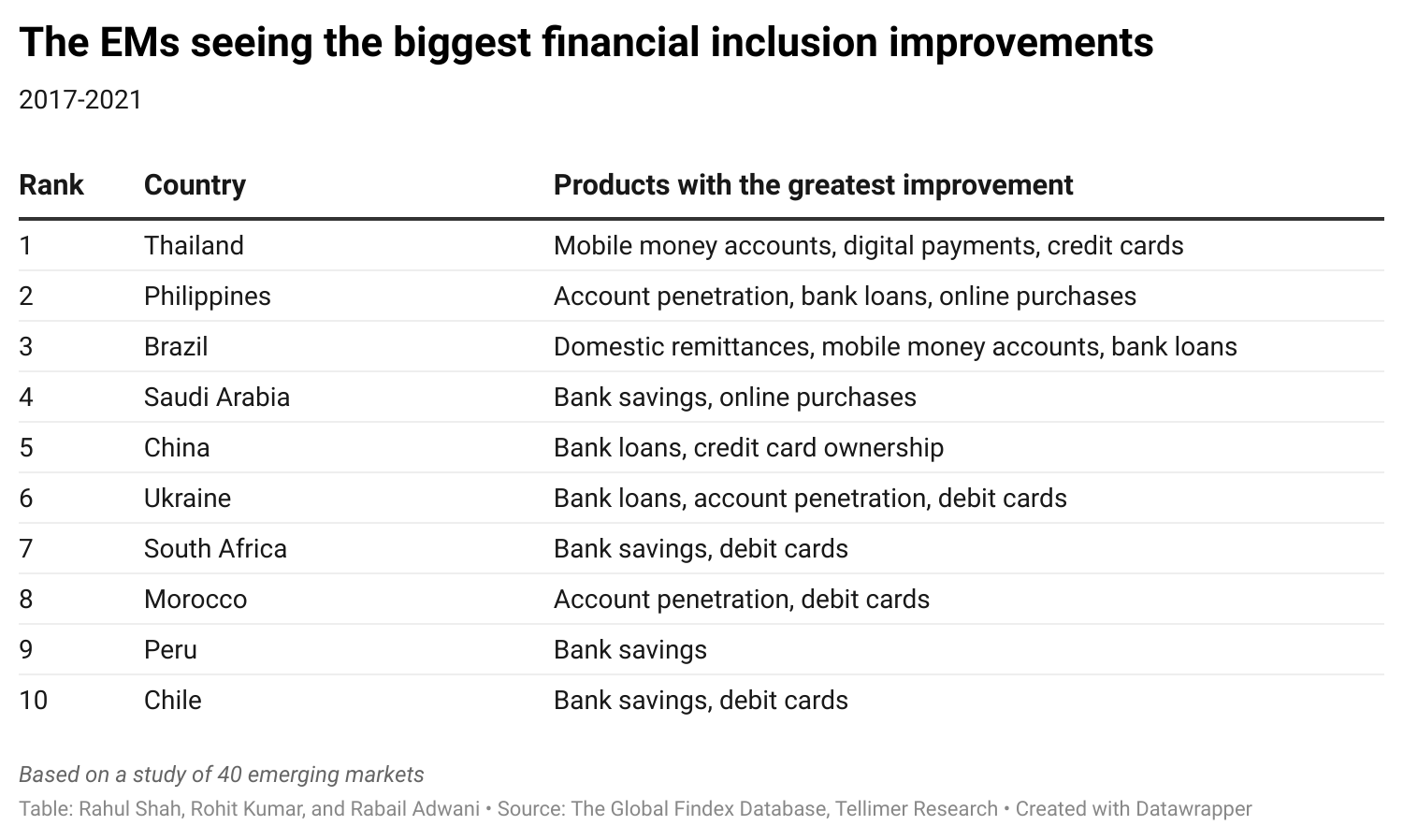 Below we dig into more detail for the top three markets highlighted above. Note that the data points refer to the proportion of individuals aged 15+ (‘adults’).

Thailand’s financial inclusion level is high – almost 96% of adults possess bank accounts or use mobile money services. Moreover, only 2% of these accounts are inactive, substantially down from 12% in 2017. The proportion of adults using mobile money services has improved drastically, from only 8% in 2017 to 60% four years later. Meanwhile, over 90% of adults have either made or received digital payments (versus the 65% EM median level).

In contrast, debit card ownership appears to have stalled, rising just 3% to 63% from 2017-21. Domestic remittances activity has only improved modestly over the same period, from 53% of adults to 67%.

We previously observed in our Ultimate Guide to Philippines Fintech that good technological infrastructure coupled with low financial inclusion makes the environment ripe for fintech disruption. Indeed, the country ranks second on our Fintech Attractiveness Index. The significant improvement in financial inclusion from 2017 to 2021 validates our findings.

Over half of the adults in the Philippines are now banked, versus one-third in 2017. Despite this improvement, financial inclusion still lags behind EM peers. Over one-third of adults have made online purchases, compared to only 9% in 2017.

Access to credit cards and formal loans has developed, but is still low, standing at 8% and 17% of adults, respectively, in the latest survey. Moreover, the proportion of inactive bank accounts stands at 11% (up from 9% in 2017).

The proportion of adults using mobile money services has increased substantially over the past four years and now stands at 27% of adults. At 41%, access to bank loans is twice the emerging markets median. Meanwhile, one-third of adults have sent or received remittances domestically. One of the slowest areas of improvement in recent years has been the level of debit card ownership.

The countries seeing the slowest recent improvements to financial inclusion

We highlight below the ten emerging markets experiencing the slowest improvements in financial inclusion, as per the latest edition of the Findex database. 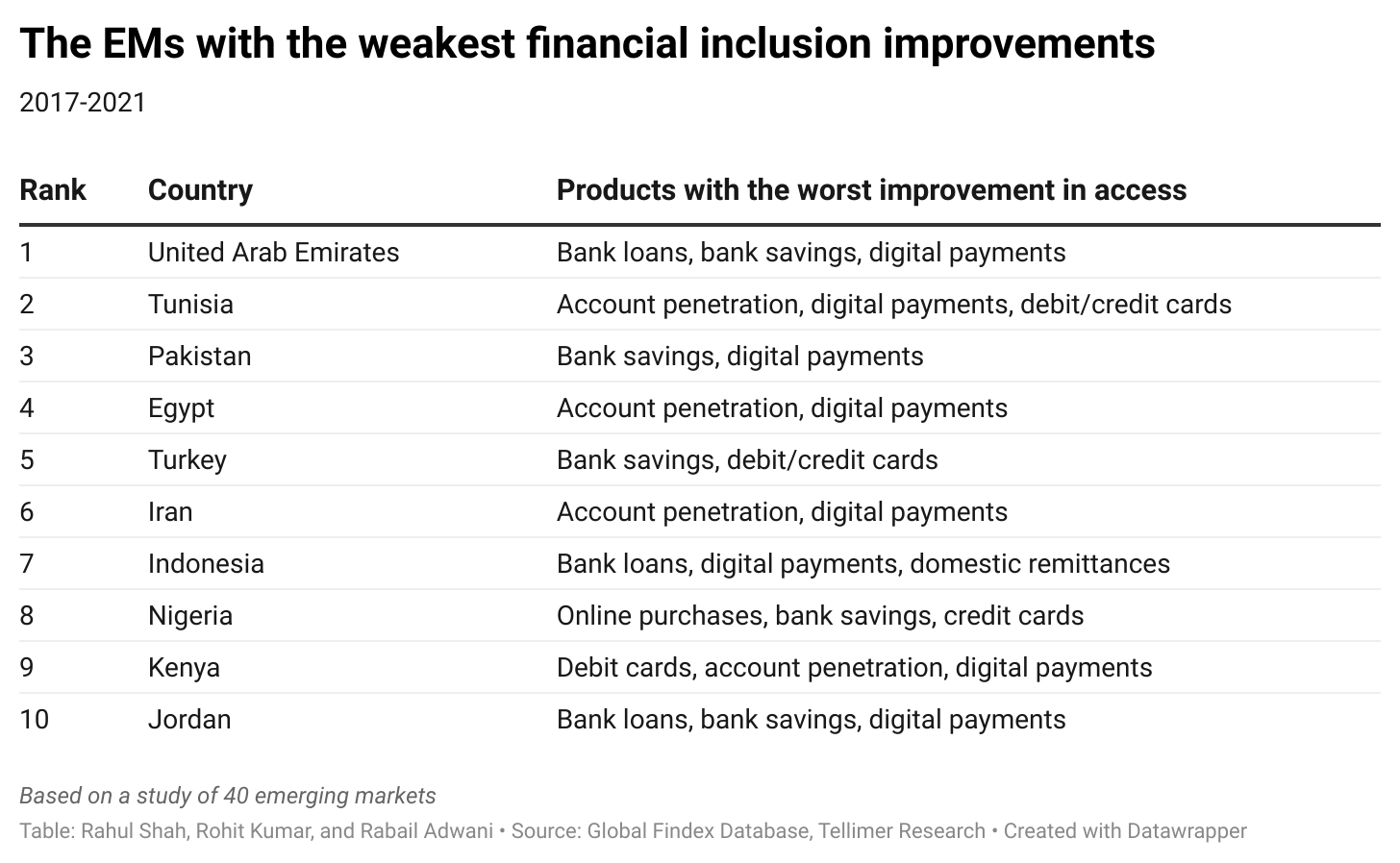 Below, we delve more deeply into the three emerging markets seeing the smallest recent improvements to financial inclusion; in many cases, data points have regressed from earlier.

The UAE’s financial inclusion level is high; for example, 86% of the adults have bank accounts (albeit this level has declined slightly since the previous survey). Almost 77% of adults have either made or received digital payments. And there is high usage of cards; 69% debit and 27% credit cards versus the EM median of 24% and 9%, respectively.

However, card penetration has weakened compared to the previous survey. Meanwhile, access to bank loans has almost halved in the last four years, to 22%. The proportion of adults saving with formal financial institutions has also worsened, from 29% in 2017 to 10% in 2021. Mobile money account penetration is much lower than elsewhere, at 13% of adults, and is declining (21% in 2017).

Tunisia’s account penetration has failed to make much headway, remaining unchanged versus 2017, at 37%. But the proportion of inactive accounts has doubled to 10%, indicating negative momentum. Access to debit/credit cards, and bank credit/savings, has also declined. Meanwhile, the proportion of adults making digital payments has been broadly stable, at 28%. One area of improvement has been the penetration of mobile money accounts, but the absolute level (4%) lags the EM median (20%); the progress since 2017 (2ppt) is paltry.

Pakistan’s financial inclusion is poor relative to emerging markets – only one-fifth of adults have bank accounts. Frustratingly, account penetration has remained unchanged in the past four years. Access to credit cards stands below 1%, decreasing further versus 2017, while access to debit cards has shown no progress. Mobile money penetration increased by a meagre 2ppt, to 9% in 2021, which is significantly lower than other emerging markets. Only 18% of adults have engaged in digital payments, compared to the EM median of 65%.