This post presents an update of the economic forecasts generated by the Federal Reserve Bank of New York’s dynamic stochastic general equilibrium (DSGE) model. We describe very briefly our forecast and its change since June 2020.

As usual, we wish to remind our readers that the DSGE model forecast is not an official New York Fed forecast, but only an input to the Research staff’s overall forecasting process. For more information about the model and variables discussed here, see our DSGE model Q & A. Note that interactive charts are now available for DSGE model forecasts.

In response to the pandemic, the New York Fed’s DSGE model has been modified because the economic disruptions caused by COVID-19 are likely different from standard business cycles. The model now includes additional shocks designed to reflect phenomena like lockdowns and social distancing (the model description on the GitHub page describes these changes in some detail). To incorporate the substantial uncertainty surrounding future economic activity, we construct three possible scenarios, described below, that differ in the projected severity of the pandemic and its effects on economic behavior. Our final forecast combines these individual scenarios by weighting them according to our a priori views on how likely each scenario is. The weights on the three scenarios are 80, 10, and 10 percent, respectively. We partly inform these views using the most recent (August) Survey of Professional Forecasters (SPF) probabilistic survey for year-over-year 2020 GDP growth.

The three scenarios we consider are a “Temporary Lockdown” (Scenario 1), a “Lockdown with Business Cycle Dynamics” (Scenario 2), and a “Second Wave” (Scenario 3). The table below shows the mean Q4/Q4 GDP growth projections for each scenario, together with the 68 percent forecast bands.

The “Temporary Lockdown” scenario explains the decline in economic activity in 2020:Q1 and Q2 using transitory demand and supply shocks and intentionally limiting the role of the standard set of shocks that populate the model in these two quarters. This yields a relatively rapid recovery, with 2020 Q4/Q4 GDP growth in the neighborhood of -3.8 percent and strong growth in 2021 and 2022.

In the “Lockdown with Business Cycle Dynamics” we allow for the standard set of shocks to play a larger role, yielding more persistent effects, with Q4/Q4 GDP growth in the neighborhood of -5.1 percent, and much more subdued growth in the medium run.

Finally, the “Second Wave” scenario builds upon the “Temporary Shutdown” scenario by additionally assuming a renewed weakness in demand in 2020:Q4, reflecting a resurgence of the pandemic in that quarter. We implement this scenario by imposing that the current quarter expectation for real GDP growth in Q4 coincides with the 10th percentile of the cross-sectional distribution of SPF point forecasts. This scenario yields 2020 Q4/Q4 GDP growth in the neighborhood of -5.5 percent, not very distant from that in the second scenario. Departing from the second scenario, the “Second Wave” scenario features a stronger rebound for the economy in 2021 and 2022, as the effects of the second wave shock are transitory. Note that the “Second Wave” scenario replaces the “Persistent Demand Shortfall” scenario in the June forecast, which was arguably counterfactual as a demand shortfall did not quite materialize—at least not in the magnitude predicted by the scenario, assuming that the median SPF projections are broadly correct in the current quarter. 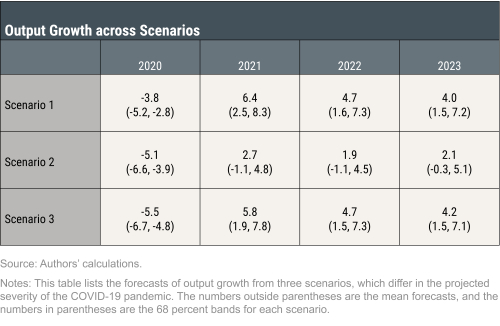 The September model forecast for 2020-23 is summarized in the table below, alongside the June forecast, and in the following charts. The forecasts from the individual scenarios are depicted afterward. The model uses quarterly macroeconomic data released through the second quarter of 2020, financial data available through August 27, 2020, SPF forecasts for GDP growth and core PCE inflation in 2020:Q3 and 2020:Q4, and Financial Blue Chip forecasts for the GDP deflator for 2020:Q3 (also from the SPF).

How do the latest forecasts compare with the June forecasts? 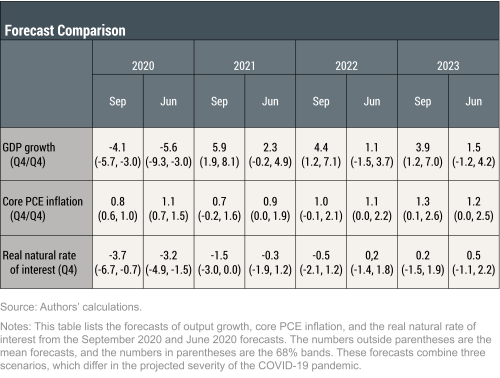 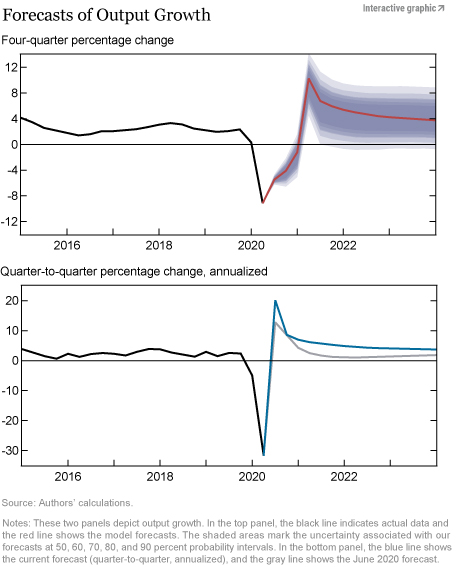 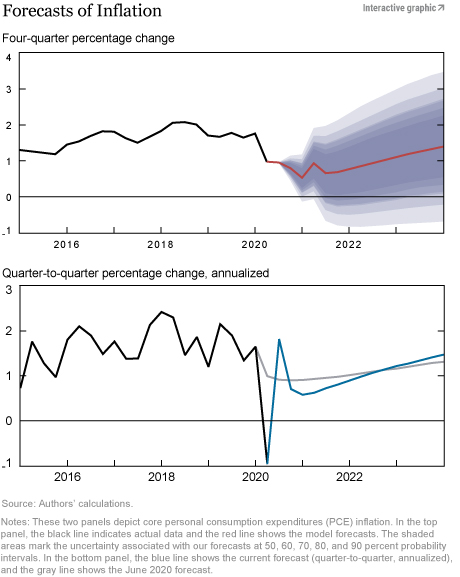 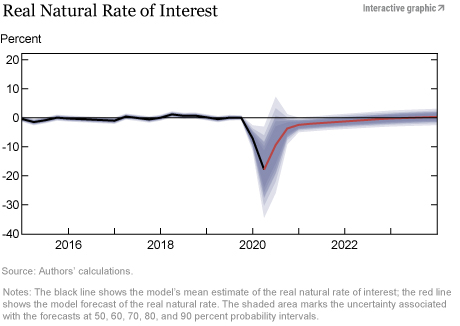 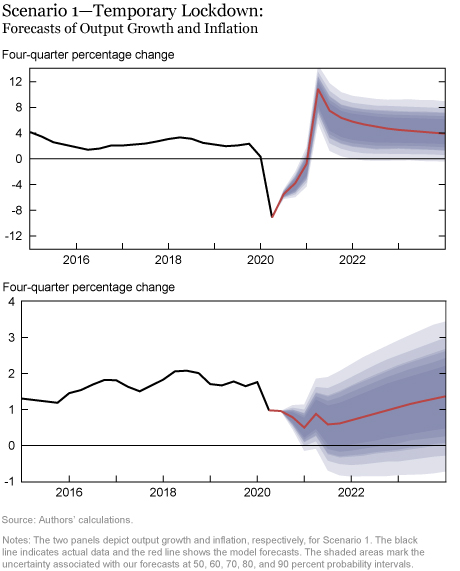 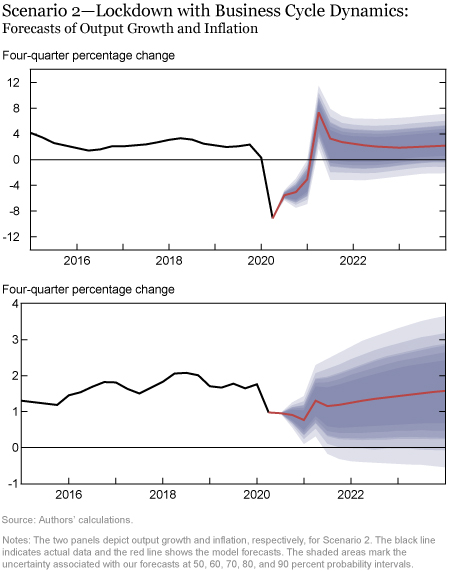 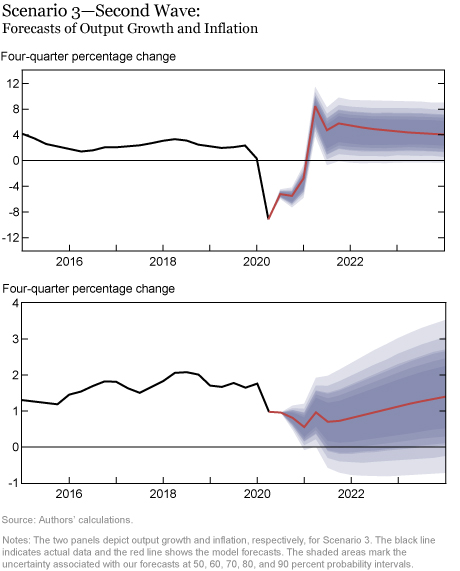 William Chen is a senior research analyst in the Federal Reserve Bank of New York’s Research and Statistics Group.

Marco Del Negro is a vice president in the Bank’s Research and Statistics Group.

Keshav Dogra is an economist in the Bank’s Research and Statistics Group.

Shlok Goyal is a senior research analyst in the Bank’s Research and Statistics Group.


Alissa Johnson is a senior research analyst in the Bank’s Research and Statistics Group.


Disclaimer
The views expressed in this post are those of the authors and do not necessarily reflect the position of the Federal Reserve Bank of New York or the Federal Reserve System. Any errors or omissions are the responsibility of the authors.
How to cite this post:
William Chen, Marco Del Negro, Shlok Goyal, and Alissa Johnson, “The New York Fed DSGE Model Forecast—September 2020,” Federal Reserve Bank of New York Liberty Street Economics, September 29, 2020, https://libertystreeteconomics.newyorkfed.org/2020/09/the-new-york-fed-dsge-model-forecastseptember-2020.html.