The most vulnerable countries as we head into 2023

Our debt sustainability and external liquidity indices provide a starting point for flagging the most vulnerable countries as we head into 2023, with Ethiopia, Mozambique, Jamaica, Tunisia, Laos, Mongolia, Pakistan, Kenya, Rwanda and Egypt some of the most vulnerable countries across the two (excluding those that have already defaulted). Many of these come as no surprise, with markets already pricing in a high risk of distress in many of these names.

More to the point, yields have surpassed 10% in one-third of countries in the EM index, locking many EM out of the market, with EM bond issuance running at half of last year’s pace. Those countries with no market access, limited reserves and large external financing needs will be forced to rely on ad hoc support from bilateral and multilateral partners to plug their external funding gaps and avoid default, with Ethiopia, Pakistan and Tunisia flagged as particularly vulnerable by this metric (excluding those in default) and Mozambique, Bolivia, Mongolia, Rwanda and Kenya also flagging as vulnerable (lower-right quadrant). 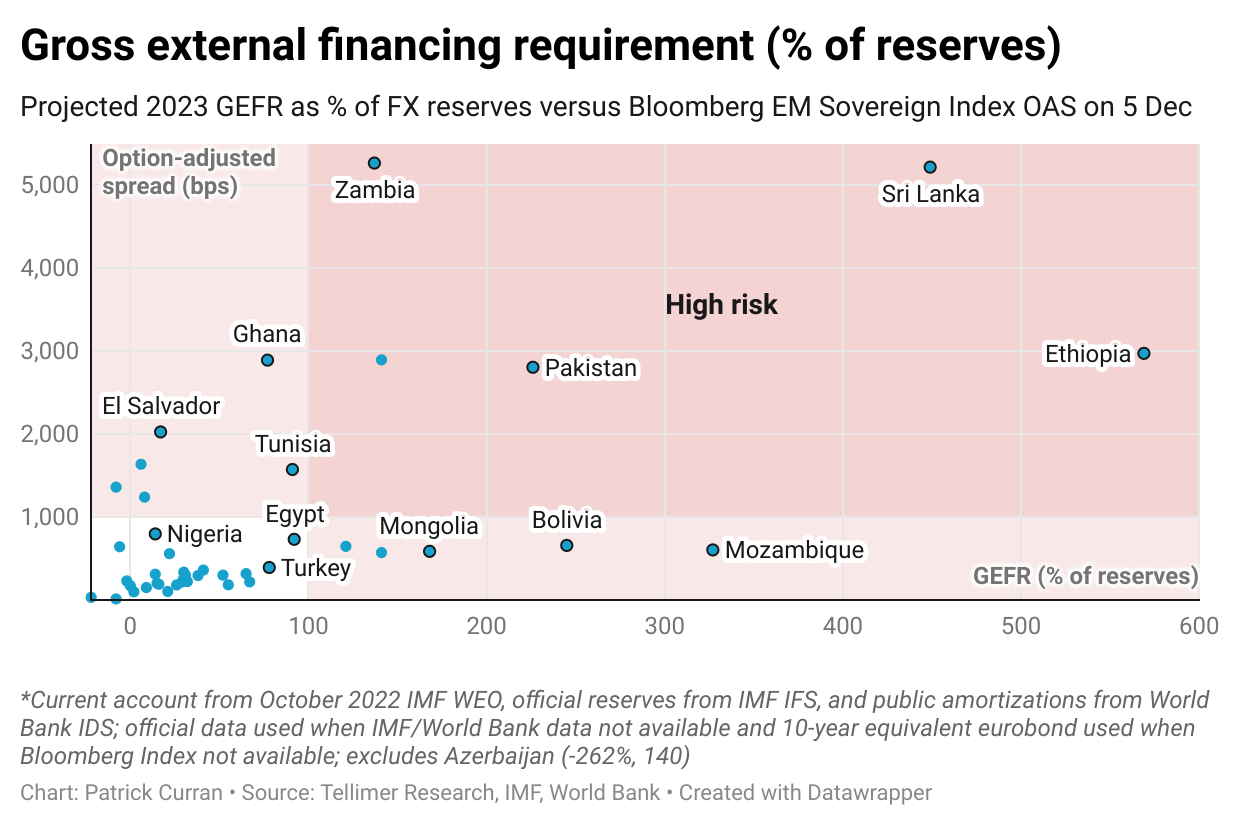 Specifically, we highlight several countries in our coverage universe that we consider most vulnerable, overlaying our vulnerability scorecards with our country-level research. In particular, we now identify five countries as being at most risk of default in 2023: El Salvador, Ethiopia, Maldives, Pakistan and Tunisia (our list previously also included Ghana to make six countries, but this has since entered default). These are largely idiosyncratic risks and a broader EM rally may do little to help ease default concerns in these countries.

We see Pakistan as one of the most likely countries to default in 2023 (although it successfully retired its US$1bn Sukuk earlier this month and remains optimistic that it will be able to get its IMF programme back on track despite the massive economic damage caused by the recent floods). In any case, with bonds trading well below our estimated cUS$50-70 recovery value, we think the risk of default is already more than priced in and maintain a Buy recommendation on Pakistan’s eurobonds.

Tunisia has bought itself some time by securing a staff-level agreement on an IMF programme, but we are circumspect about its ability to keep the programme on track and think default is likely still inevitable over the medium term without a sustained policy shift (albeit perhaps not in 2023).

Likewise, Egypt has bought itself some much-needed runway by agreeing to the IMF programme and securing significant financing from partners in the Gulf but will remain vulnerable over the medium term, and Kenya continues to perform well under its ongoing IMF programme but has little margin for error as reserves continue to decline.

In Ethiopia, it is still unclear if bondholders will be included in its debt restructuring under the Common Framework. While eurobonds are a negligibly small portion of Ethiopia’s debt stock and service bill, official creditors may condition relief on private sector involvement to satisfy the comparability of treatment principal and, with reserves plummeting below one month of imports coverage, there is diminishing runway to turn things around ahead of the US$1bn eurobond maturity in December 2024.

El Salvador faces the risk of default on a US$667mn bond maturity on 24 January 2023. While the authorities launched a second cash tender offer on 30 November (the offer was due to close on 6 December, unless extended) in order to help reduce the size of the maturity, the amount allocated for the purchase was small and the extent of bondholder participation is unclear. But, even if the payment is made, we think default concerns will persist given the ongoing concerns over the lack of a credible and coherent financing plan, limited policy options, and still high debt service costs (after the '23s maturity, there is a bit of space until the next maturity – the smaller '25s – but interest on the bonded debt is still cUS$500mn a year compared with reserves of US$2.5bn). Bond prices already reflect some amount of distress (with prices around the high 30s, low 40s excluding near maturities) although we think they could be vulnerable on the downside if default materialises.

We think default risk is elevated in the Maldives, amid limited financing options and large financing needs, while official reserves are falling. Reserves have fallen by 18% this year. The government plans tax rises and is considering other measures to address fiscal vulnerabilities – with double-digit fiscal deficits and public debt over 120% of GDP – while the level of reserves could force a deeper adjustment. However, 2023 is an election year which may reduce the government’s appetite to pursue, and stick to, needed reforms. And, as we know from Barbados and Suriname, new governments can choose to default. We don’t think this is reflected in current bond prices (cUS$79 mid on the MVMOFB 9.875% 2026s).

For those countries that do default, we can draw lessons from recent and ongoing restructurings, which are likely to set some major precedents. Whether inside or outside the Common Framework, we observe that many restructurings are suffering from delays in getting the official sector creditor committee to the table (mainly due to China) and disagreements with private sector creditors (mainly due to lack of early engagement by the official sector and difficulties with sequencing). These issues will need to be ironed out to prevent their reoccurrence in the future.

This report is an updated version of the relevant section from our publication 2023 outlook – virtuous circle, dated 7 December, following Ghana’s moratorium announced on 19 December.