The moral imperative (or lack thereof) for IMF funding

This is the second in a series of thought pieces that will look at the role of development finance institutions post-Covid-19. It was preceded by my colleague Paul Domjan’s piece on the ethics of economic forecasting (see here).

Covid-19 has been an unprecedented external shock for advanced and developing countries around the world, with no one escaping its impact. And in the words of IMF Managing Director Kristalina Georgieva: "A global crisis like no other needs a global response like no other."

As we have previously written (see here and here), Advanced Economies (AE) have responded with fiscal stimulus averaging c20% of GDP, cut interest rates to (or below) the zero-lower bound, and will launch an estimated cUS$6tn of asset purchases by year-end (totalling 15-23% of GDP across the five largest central banks).

However, policy space is more limited in developing countries, with stimulus packages averaging c5% of GDP in larger EMs and c1% of GDP in smaller FMs. EM/FM central banks have had more room to cut rates and have seized the opportunity from loose AE policy to do so, with cuts averaging c150bps ytd across a sample of 13 major EMs. However, QE has only been implemented by 17 large EMs, and the scale has been much more modest at c3% of GDP so far this year.

With insufficient resources to battle Covid-19 and lacking the market access needed to fund a meaningful policy response, EM/FMs have relied on multilateral and bilateral support to stay afloat. Enter the IMF, which has doubled its "rapid-disbursing capacity" to US$100bn to support countries in crisis. Through July, 76 countries have received emergency funding out of the 87 that have made requests, with disbursements reaching US$28.9bn (see our tracker here).

While funds disbursed under the emergency RCF and RFI facilities are not subject to policy conditionality like traditional IMF programmes, IMF policy prevents it from lending into arrears or to countries in which debt is unsustainable. There are, however, "emergency situations" where there is insufficient time for the debtor to undertake good faith efforts to resolve arrears or set debt on a sustainable trajectory in which the Fund can make an exception (see here).

One may be tempted to argue that Covid-19 is just such an emergency situation, and that the IMF has the "moral imperative" to extend support to all countries that are suffering from this unprecedented external shock. In practice, however, the IMF has so far stuck to its guns and refused to extend funding for countries with an unsustainable debt burden and no evidence of good faith reform efforts. 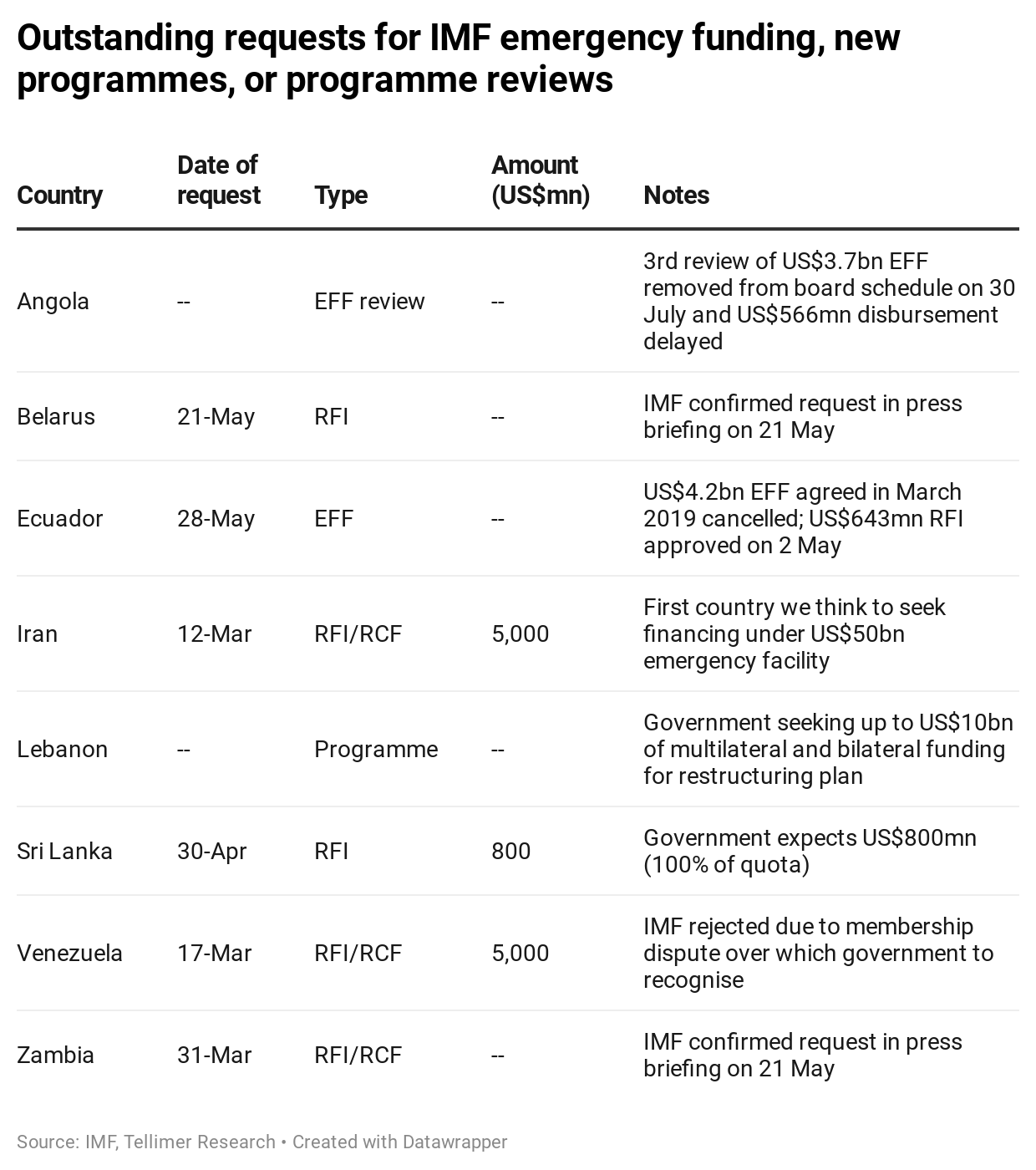 Countries like Zambia and Sri Lanka may have hoped that, despite unsustainable debt burdens, the IMF would greenlight RFI/RCF financing. As we have previously written (here), however, Zambia-IMF relations have deteriorated in recent years due to an utter lack of good faith reform efforts by government. In the case of Sri Lanka (here), the IMF likely preferred to wait until after elections for clarity on policy priorities (the IMF rarely approves programmes or financing too close to elections).

In Venezuela, the IMF is unable to hold negotiations due to lack of clarity on who the authorities actually are. If a technical government was formed, then the ambiguity could be cleared, provided the interim authorities are deemed by the Fund to have sufficient representative authority to make a programme request (this question applies to Lebanon, which is operating with a caretaker government – see here). After disputed elections in Belarus (see here), its situation lies somewhere between Sri Lanka (waiting on policy clarity post-election) and Venezuela/Lebanon (ie waiting on a stable government).

For those wondering whether Covid-19 would cause the IMF to abandon its normal principles on lending into arrears to respond to the "moral imperative" of supporting countries in need, no country paints a more telling portrait than Lebanon. Lebanon is on the brink of economic and political collapse (see here) and suffering from a tragic explosion that levelled much of the capital city of Beirut (here), but the most recent IMF statement reiterated its insistence that funding is contingent on credible reform efforts.

If Lebanon cannot rely on IMF support in its time of need, then similar moral arguments from the likes of Zambia and Sri Lanka will undoubtedly continue to fall on deaf ears absent good faith efforts by the government. And well they should – the IMF’s mission is to promote global financial stability by supporting countries that are experiencing balance of payments difficulties, not to provide a lifeline to governments that have mismanaged their finances.

That is not to ignore the moral argument – it is clear that AEs have far greater resources at their disposal to deal with Covid-19 and that willingness of investors to fund costly stimulus programmes does not always correlate directly with countries’ willingness and ability to sustainably manage public finances. However, the IMF is not and should not be the only game in town to soften the humanitarian impact.

In the case of Lebanon, bilateral partners have stepped up to provide cUS$300mn of disaster relief, while the UN’s World Food Programme (WFP) has mobilised resources to prevent food shortages and starvation. There is a whole field of study on aid efficacy which sets general budget support (which is fungible and often misused) against funding to specific projects or third-party organisations (which is harder to misuse but undermines sovereignty and capacity development). Extreme cases like Lebanon where corruption and/or mismanagement run rampant arguably embody the rationale for bypassing the government, which would make IMF funding an inappropriate channel for relief.

On the other hand, the majority of Lebanon’s multi/bilateral funding pipeline is tied to IMF programme approval. This bolsters the moral argument for IMF funding, as programme approval could be necessary to catalyse additional funding and/or kickstart debt restructuring negotiations. However, a stamp of approval from other large multilaterals (such as the World Bank) could serve a similar purpose, and one could argue that donors should be equipped to make funding decisions independent of the IMF.

In any case, the onus to support countries in need should not fall solely on the IMF, which is a single piece of the multilateral financial system. Governments should not simply expect an IMF bailout without any evidence of good faith policy effort and must provide a credible signal that they are headed in the right direction. Post-Covid-19 that bar may be a bit lower, with the IMF potentially fast-tracking funds for countries that show "good faith effort" even if tangible progress is not yet forthcoming, but for governments like Zambia, which lack credibility, that may still be a heavy lift.

Likewise, citizens of corrupt and mismanaged states should not be left to fight the Covid-19 battle alone. Recognising the "exorbitant privilege" present in many AEs that allows them to mobilise infinite fiscal and monetary resources without being punished by markets, developed nations should mobilise targeted bilateral and multilateral aid to soften the humanitarian impact of Covid-19 without simply bailing out governments that are suffering from their own corruption and/or mismanagement.