The Maldives: Fiscal measures welcome but is time running out?

An Article IV mission was held in September (as presaged in the press release following the staff visit on 26 July) ahead of an expected board meeting later this year (the last Article IV was concluded in October 2021, so on a standard 12-month cycle, we assume the board meeting will be this month). We hope the staff report will be published this time. 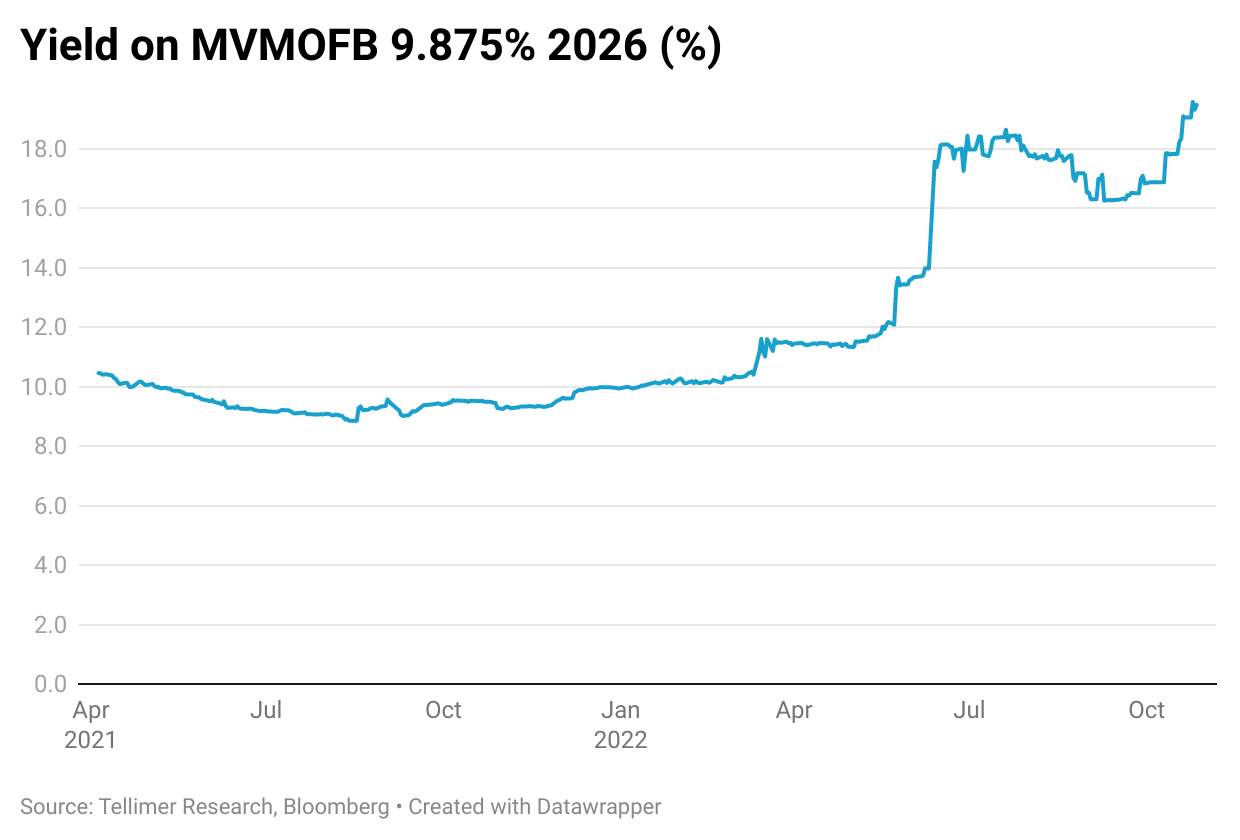 The economy is recovering at a strong pace due to a strong rebound in tourism, which has remained resilient despite initial fears following Russia’s war in Ukraine that it might lead to some reduction in global appetite to travel. Arrivals rose by 43% over the period January-August this year, compared to last year, according to official data. This has been helped by Maldives’ capacity to redirect source countries for its inflows, taking advantage of its strong branding. India, always an important source country, has now emerged as the largest, overtaking the UK, while Russia has held up after an initial decline. China’s reopening to travel presents an upside risk to tourism.

Real GDP growth is projected at 8.7% this year in the WEO, unchanged from the staff forecast in July, easing next year to 6.1%, and towards a medium-term trend rate of 5.5%. However, inflation has also picked up and is expected to rise to 6.25% yoy by year-end in the WEO, higher than previously expected (the July press release said 3.1%), although falling back to 3% next year and 2% thereafter.

Fiscal vulnerabilities remain high. Stronger than expected revenue in 2021 and 2022 have helped the fiscal position, but this has been offset by higher spending, due to sustained high infrastructure spending, the higher cost of oil and food imports and emerging spending pressures from rising subsidies, increased interest costs due to higher rates, and reforms of the wage bill. As a result, as noted in the July press release, the fiscal deficit is expected to widen and remain in double digits in 2022. The WEO projects a deficit of 16.4% of GDP in 2022, up from 14.3% in 2021, compared to 6% pre-pandemic. Moreover, the 2023 deficit is now expected to be much wider than previously expected (12% versus 8.5% in the April WEO). However, the WEO now projects a slightly faster narrowing in the deficit over the medium term, down to 5% in 2026.

As a result, public debt, remains high and falls only slowly. Debt peaked at 154% of GDP in 2020, falling to 125% in 2021. It is likely to be about the same this year (126%) and is expected to stabilise at around this level over 2022-2024, before falling to 113% by 2027 in the WEO. At its current level, public debt is still 48ppts higher than it was before the pandemic. The decline is due in part to higher nominal GDP growth but it is clear more fiscal action is needed.

The government has its own ambitious home-grown fiscal adjustment programme. On the revenue side, it plans tax rises in 2023 with an increase in the domestic goods and services tax from 6% to 8% and the tourism goods and services tax from 12% to 16% in 2023. This has been welcomed by the IMF as an important initial step and, we understand, is included in the WEO baseline. We understand the tax measures, which are currently in parliament, have an expected yield of 2.7% of GDP.

In addition, we understand the authorities are also considering measures on the spending side, including in the areas of subsidies, and delaying some capex and the public sector wage harmonisation (which we think together could be worth another c3% of GDP).

Even the tax measures alone, if implemented, will have an impact and help to reduce the deficit, while implementing all the measures will bring about a more significant reduction. Moreover, if the measures are made permanent (currently capex and wage harmonisation are envisaged as temporary), that will result in a fiscal adjustment amounting to a hefty 6% of GDP, which will bring about a significant adjustment in the primary balance (the primary deficit is projected at 13% this year in the WEO). We certainly see scope for cutting capex which, at 13% of GDP, is high and much higher than the region (around 3-4% of GDP).

As such, we detect more willingness to do reforms, which is encouraging, compared to our observations in the Spring and last year, and under most circumstances a 3% adjustment alone would be considered big. The authorities are even planning to do more. However, whether this reflects a new-found vision of policy discipline, or is merely a necessary adjustment to lower availability of funding, remains to be seen.

However, next year is an election year (with a presidential election in October 2023), so it remains unclear to us if the government will do reforms. The elections may reduce the government’s incentive to pursue these spending measures (or even if they do, they could be offset by spending pressure elsewhere). We are concerned about the risks of additional pre-election spending.

In the meantime, financing is an issue, with limited financing options amid large financing needs, while official reserves are falling. The government has had to rely more on domestic sources of financing, although banks may be reaching capacity, and central bank financing. External financing is limited (although Maldives has been able to rely in the past on bilateral support from China and India, and regional financing from the Middle East). Meanwhile, Maldives doesn’t have market access (market access was lost over a year ago and even the five-year sukuk issue in March 2021, and tapped later, was done at a high rate, with a coupon of 9.875% but priced to yield 10.5%). In truth, it is not clear to us that Maldives ever had 'normal' market access for typical benchmark-sized bonds as opposed to smaller private-placement-type issues tapping specific markets. There is still time, however, ahead of the 2026 refinancing, although reserves may run out before then on their current trajectory. Reserves have fallen by 18% this year, to stand at US$658mn in August (IFS data). The level of reserves could force a deeper adjustment. 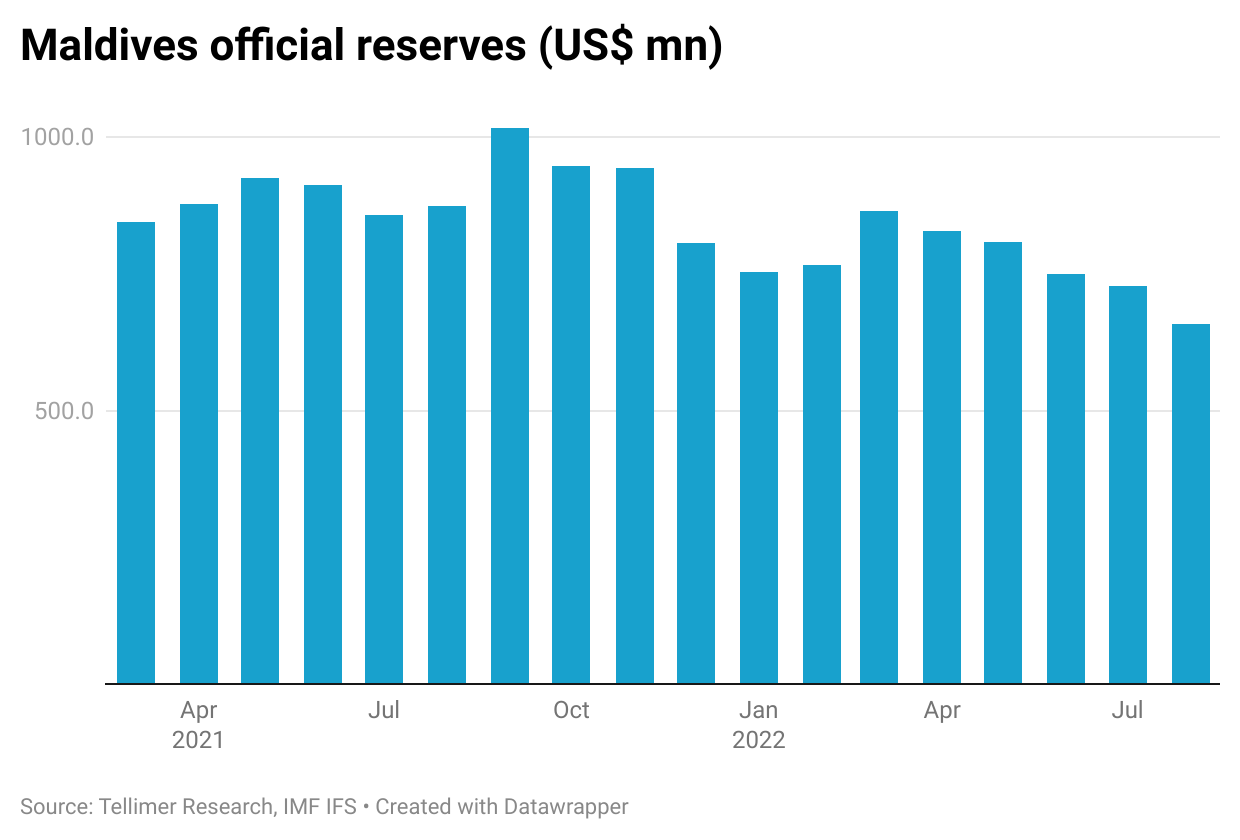 The authorities haven't requested an IMF programme to our knowledge (although if ever a country needed one…). Yet, the closer we get to the election, the shorter the window is to get one.

We downgrade our recommendation on Maldives (Caa1/-/B-) to Sell from Hold, with a yield of 19.3% (price US$77.0) on the MVMOFB 9.875% 2026 sukuk on a mid-price basis as of cob 26 October on Bloomberg. The bonds have fallen 23pts (-23%) this year – they were at par at end-2021 – with the yield up 940bps, and are down 18pts since we assigned a Hold on 29 April, since when global financial conditions tightened more markedly, although their high coupon has meant they have performed slightly better than the index (a total return of -17% ytd versus -24% for the Bloomberg EM Sovereign USD index). However, given the decline so far, our downgrade may be late with most of the damage already done, while a sticky investor base may support prices from here.

While we recognise the tourism-led recovery and welcome greater willingness to pursue fiscal reform measures, we are now more negative given implementation risks, especially ahead of an election, and lack of visibility over financing sources, especially as we expect tighter global financial conditions to persist for some time. The fall in reserves will add to already limited financing options. The Maldives always has the option of going to the IMF for a programme and such a request could be seen as positive by bondholders, although there might also be concerns as to what any programme would contain given the debt situation. Meanwhile, investors may be concerned that new bilateral lending will make any restructuring, if needed, more complicated. 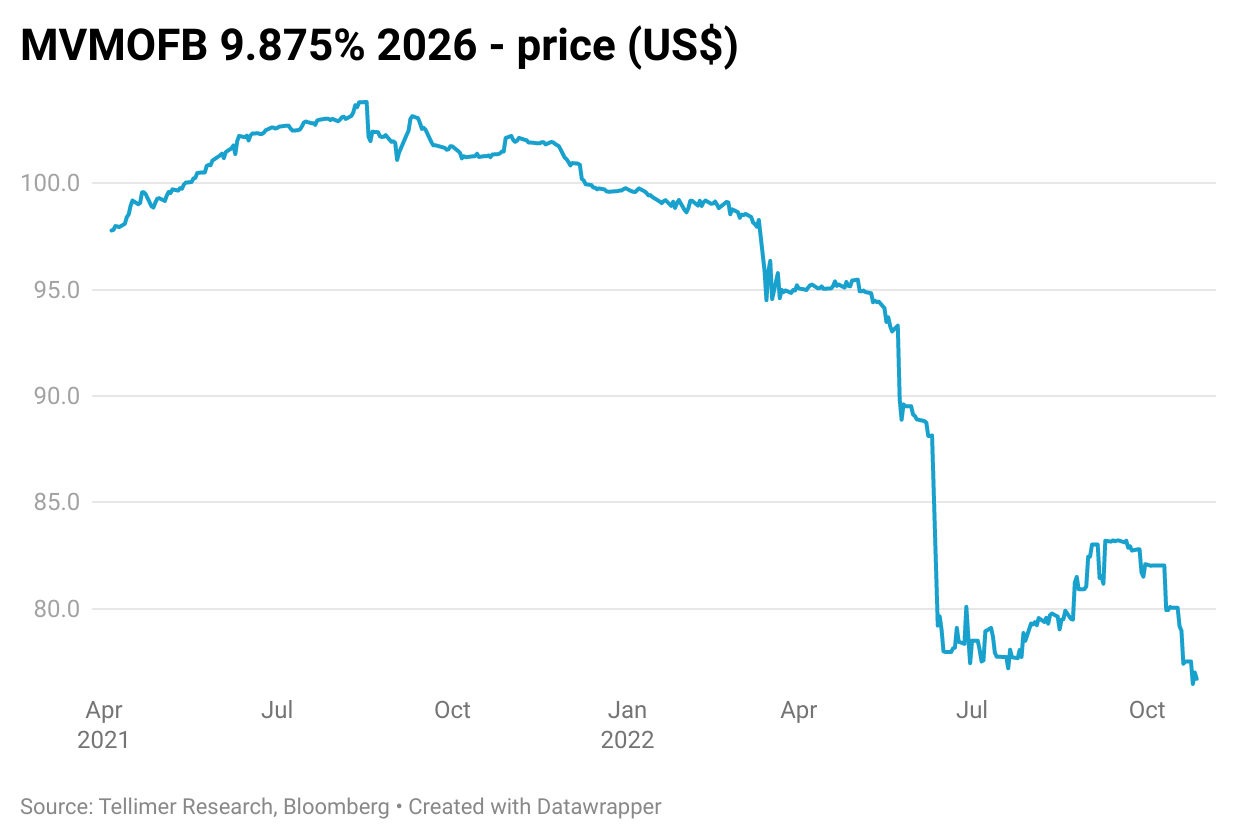