Core bond markets remained under pressure yesterday, with UST, gilt, and bund yields all rising during the session. In the US, 2yr Treasury yields reached 3.5% for the first time since 2007, although it has dipped marginally from that level in early trade today. The hawkish message sent by the Fed at Jackson Hole last week, coupled with some Fedspeak this week that has pushed against market expectations for rate cuts next year, have driven the surge in yields. Furthermore, inflation in the Eurozone surged to a new record high for August, piling pressure on global bonds. A Bloomberg gauge of global government bonds has, therefore, come increasingly closer to falling into a bear market, dropping just shy of 20% since its peak in 2021.

This surge in yields for core markets has kept risk assets under pressure, with equities struggling through the final days of August while commodities and emerging market currencies have also weakened. Until we get signs that the Fed sees rates at near their peak, it is unlikely that bond yields will retreat by any significant degree, suggesting that risk assets are to remain under pressure and market volatility will remain elevated.

Africa: Africa Finance Corporation (AFC) has reached an agreement with Italy’s state-controlled bank Cassa Depositi e Prestiti SpA to obtain funding for clean energy projects to combat global warming and the impact of climate change on the continent. The Italian lender advanced a EUR 100mn ($101mn) loan to AFC to fund renewable power, energy efficient projects, and climate-resilient infrastructure, according to a statement from the investment bank. While Africa has done the least to cause the global climate crisis, producing just 4% of the world’s greenhouse gas emissions, the continent is expected to suffer the most from its impact as it lacks the resources and technology to deal with its fallout. African countries have therefore called on developed countries to fund their transition to clean energy.

Africa: Aspen Pharmacare yesterday announced the expansion of its vaccine capability through a deal with the Serum Institute of India. Aspen agreed with Serum to make and distribute four Aspen banded vaccines in Africa, where the coronavirus pandemic exposed a chronic lack of shot-making capacity. According to Aspen, the 10-year deal covers a quartet of routine doses named pneumococcal, rotavirus, polyvalent meningococcal and hexavalent. The Deputy Director at the Africa Centres for Disease Control and Prevention, in a separate statement, said that this was a very important step for African vaccines and that “it has responded to African Union heads of state and government’s call that 30% of the continent’s requirements for human vaccines be procured from African manufacturers.”

Egypt: Finance Minister Mohammed Maait has said that Egypt aims to attract foreign direct investments (FDI) of $10bn annually over the coming four years. According to Maait, the government also plans to exit from some of the economic activities to support the role of the private sector in industrial and exporting activities. Egypt is seeking to attract more FDI and boost exports, so it relies less on its once-lucrative carry trade. For so long, Egypt had relied on its lucrative carry trade to attract massive foreign inflows however, since the onset of the war in Ukraine, this has changed. The secondary effects of the war and a currency devaluation have driven up inflation in Egypt, detracting from the country’s real yield while pushing the real interest rate into negative territory. This has triggered a mass exodus of foreign capital.

Nigeria: M2 money supply in Nigeria slowed further in July, coming in at a 4-month low of 21.50% y/y from 24.80 in June. Private sector credit meanwhile rose to 21.30% y/y in July from a downwardly revised 17.9% y/y in the month prior. While money supply growth in Nigeria slowed in July, it remains above the 10-year average of 13.4%, suggesting that monetary conditions in Nigeria remain relatively loose. Money supply has been underpinned by the increased demand for cash by members of the public amid the continued rise in prices of goods and services and increased borrowing by the Federal government and lending to the private sector propelled by the loan-deposit ratio policy of the CBN. Going forward, loose monetary conditions will continue to provide room for inflation to take hold.

Uganda: Price pressures in Uganda showed no signs of abating, with headline inflation accelerating further in August to 9.0% y/y from 7.9% y/y in July. This was the fastest pace of price growth in the economy in a decade as unfavourable weather conditions and rising global energy prices continued to underpin inflationary pressure. Energy fuels and utilities inflation jumped to 19.6% from 17.2% in July, while food crop prices rose to 18.8% in August from 16.4%. The strong inflation data suggests that risks for further monetary policy tightening at the next meeting exist. Last month, the Bank of Uganda hiked its policy rate for a third time this year and signalled its willingness to tighten monetary policy further should price pressures remain robust.

Oil: Oil markets succumbed to economic growth concerns and rising bond yields yesterday, plunging for a second straight session. This bearish bias has continued this morning to take the front-month Brent contract back towards $95 per barrel, marking a near $10 per barrel swing since Monday. WTI, meanwhile, has dropped back below $90 per barrel to extend its longest losing streak since 2020. With the sharp volatility and recent declines, investors will be turning their focus to next week’s OPEC+ meeting, given that we have had some conflicting signals on what the cartel and its allies may do. We will also have a G7 meeting of finance ministers on Friday, with the agenda including discussions regarding a possible price cap for Russian oil. The UK has already signalled its support for the measure and thus we could see it gain greater support.

Forex: The Ghanaian cedi is now one of Africa’s most volatile currencies

The Ghanaian cedi remained in the spotlight yesterday as Tuesday’s rebound was short-lived. The cedi crossed the GHS 10 per dollar mark for the first time on record, adding to its year-to-date drop, which has made it the worst performing currency after Sri Lanka’s rupee among the 150 economies tracked by Bloomberg. While loan inflows may have improved foreign currency supply and sentiment to some degree, Ghana’s fundamental backdrop remains gloomy. A deteriorating macroeconomic outlook against a backdrop of tightening global financial conditions and heightening concerns about the impact of a global slowdown in demand for commodities such as cocoa are some of the factors that have led investors to rotate out of the country’s bonds and the cedi. 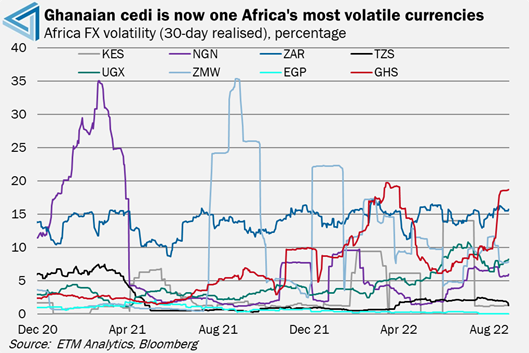 It is, therefore, unsurprising to see that the cedi has become Africa’s most volatile currency when looking at ETM’s 30-day realised volatility chart for African currencies. Volatility has surged to almost 19.0% from lows of around 6% at the beginning of June. Note that the current unfavourable global economic environment has significantly affected EM and frontier markets with weak fundamentals.

As mentioned in previous analysis,  the cedi’s biggest detractor comes from the fiscal side. While loan inflows and central bank measures might ease pressure at the margin, securing an International Monetary Fund programme as soon as possible remains key to addressing Ghana’s deteriorating macroeconomic outlook and supporting the cedi.

Markets have woken up some big news relating to Zambia. After months of delays, the International Monetary Fund Board has approved the $1.3bn 38-month extended credit facility (ECF) arrangement for Zambia. The IMF said in a statement released in the early hours of this morning that the ECF-supported program will help reestablish sustainability through fiscal adjustment and debt restructuring, create fiscal space for social spending to cushion the burden of adjustment, and strengthen economic governance, including by improving public financial management. The program will also catalyze much-needed financial support from development partners. The Executive Board’s decision will enable an immediate disbursement of roughly $185mn.

While the fiscal situation in Zambia remains fragile, notwithstanding the securing of a new IMF program, Zambian local currency bonds are amongst the most attractive in the world at the moment when looking at ETM’s bond attractiveness and carry trade models. Two main factors underpinning Zambian bonds' attractiveness are the kwacha’s resilience and the significant pullback in headline inflation. 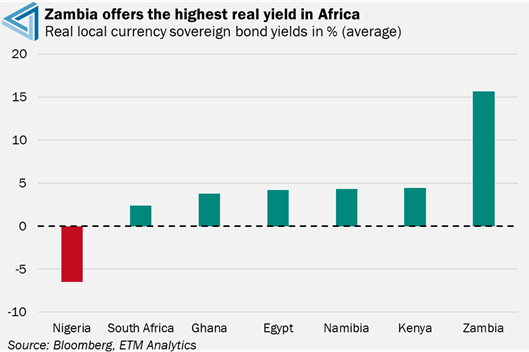 As of yesterday, the average yield of Zambian local currency bonds sat at 25.39%. Deducting headline inflation, which slowed to 9.8% y/y in August, from the average yield, Zambia’s real average local currency bond yield sits north of 15.00%. In a world where inflation is surging and emerging, and frontier market currencies are under significant pressure amid a surging US dollar, Zambia is looking increasingly attractive as a carry destination.

Although liquidity issues are still a factor to consider, investors seeking high returns will find it hard to ignore the attractive yields on offer in Zambia, particularly if the currency resilience persists in the months ahead. Note that the Kwacha is Africa’s second best-performing currency this year, gaining an impressive 5.15% despite the unfavourable external conditions and surging USD. The news overnight should provide an additional tailwind to Zambian assets.

Coming in as expected, headline inflation in Kenya accelerated from 8.3% y/y in July to 8.5% y/y in August. August marked the strongest growth in consumer prices since 2017, when the country was hit by extreme drought, driving food prices sky high. On a month-on-month basis, consumer prices rose by 0.4% in August. Similar to the inflation crisis in 2017, the main drivers behind the recent acceleration in inflation in Kenya have been rising food and fuel costs. 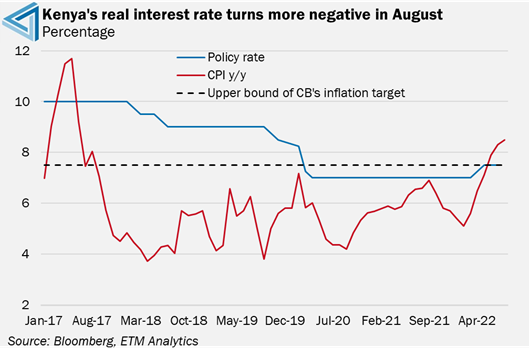 Specifically, food prices rose by 15.3% in August compared to levels seen last year, with much of this due to surging corn flour and corn grain prices, which were up more than 30% y/y. Energy prices were also up sharply in August, with diesel and paraffin prices both around 30% higher than levels seen in the same month last year. Another contributor to the quickening in headline inflation was furnishing and household maintenance costs, which rose 10.3% y/y in August.

Adding to the inflation pressures has been the persistent depreciation in the Kenyan shilling, which has lost more than 9% over the past 12 months. The currency depreciation has driven up the price of imported goods at a time when Kenya is looking like it will be more dependent on food imports due to mounting drought risks. Against this backdrop, we assess the risks to the inflation outlook to be firmly to the upside, even though the central bank said in its previous policy statement that it expects consumer price growth to moderate in the months ahead.