16 May 2022
Published by
Tellimer Research

The good, the bad and the ugly in the EM tech rout

Most readers will know Gloria Gaynor’s hit “I Will Survive”. It hit the charts in 1978, which is before most fund managers were born, but shortly after two small companies called Microsoft and Apple Computers were formed.

Fast forward 44 years and the lyrics could provide solace to investors, as they deal with the end of a tech love affair and a share price collapse.

The tech-heavy Nasdaq is down 29% in six months, and some of its components have fared much worse than that. The FAANGs are down an average of 45% in the same period. 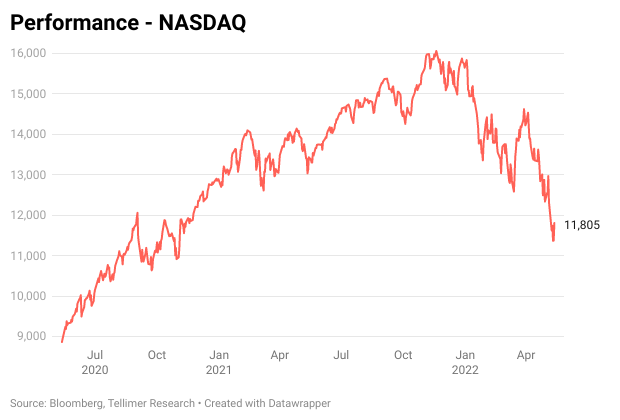 However, the drops in the Nasdaq and the FAANGs are tepid compared to the performance of the Baby Amazons. These EM tech challengers are down by an average of 70%. Pinduoduo and Jumia have lost over 80%. 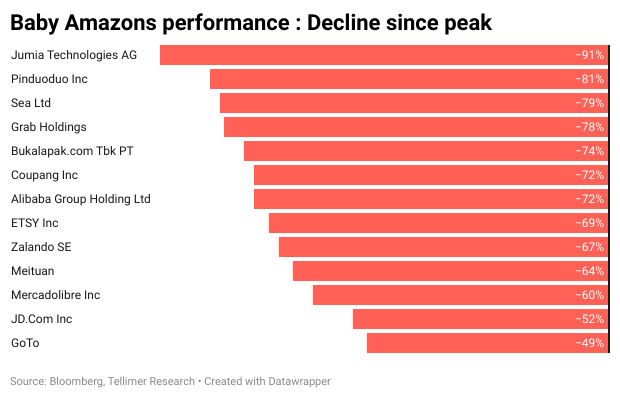 Investors that lived through the 2000 Nasdaq meltdown fear seeing history repeat itself. The Nasdaq took 17 years to recover from the May 2000 crash, on an inflation-adjusted basis.

A long tech winter like the post-2000 Nasdaq slump is one possibility. The Nasdaq lost 78% of its value from its peak in March 2000. It took until August 2017 for the index to regain its March 2000 high (on an inflation and dividend-adjusted basis).

A slump of this nature cannot be ruled out. However, our view is that the probability is low. Unlike the dot-com bubble, this time around the major tech companies such as the FAANGs have strong balance sheets and are cash generative.

The same applies to the EM tech stocks such as the Baby Amazons. The Baby Amazons are well funded. Jumia and Sea, for example, raised equity at the top of the market. The market expects most of these companies to become FCF positive by FY25. 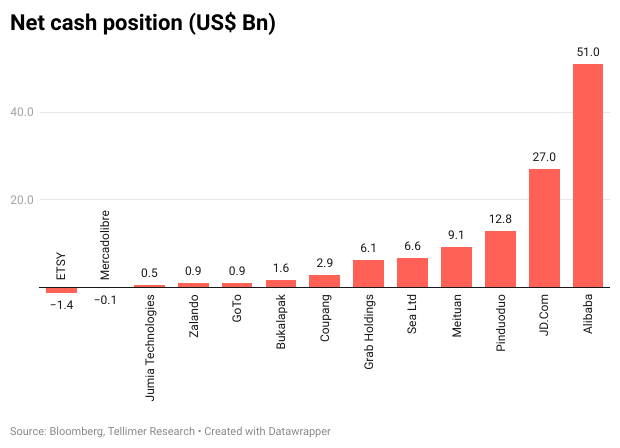 Buy the Dip has been the mantra since 2008, and it has been a winning strategy in the tech space. The March 2020 Nasdaq sell-off at the onset of Covid was followed by a dizzying boom.

The chances of a sharp bounce-back seem to us to be unlikely now. The main reason is the Fed rate hikes. With higher interest rates, the market is less patient with extravagantly valued, loss-making tech stocks. Higher interest rates cut the present value of tech companies’ future profits, and there are still likely a number of further rate increases to come this year. That would make things even worse for tech valuations.

The volatility of the tech sector has been dizzying in the past five years. The Nasdaq has had a standard deviation of 7% since May 2017. The Baby Amazon Index has been similar.

The volatility in the operational performance of tech stocks was due to a major macro event – the Covid pandemic turbo-charged usage of e-commerce. Lockdowns led to increased adoption and usage of online shopping, with Baby Amazons such as Sea, Coupang, and GoTo achieving yoy growth in GMV of up to 50% in 2020.

With the easing of the pandemic, we may see steadier operational performance in the tech space and the volatility in the stock market performance of the sector may normalise accordingly.

The raft of 1Q results may show operational buoyancy

This week will see several Baby Amazons report, including Sea, Grab and Jumia.

We expect the sector to continue to show strong operational results, despite the easing of the pandemic. E-commerce usage has become strongly engrained in emerging markets.

Coupang, one of the most operationally efficient Baby Amazons, reported excellent first-quarter results on 11 May. Revenue rose by 22% yoy to US$5.1bn. Coupang’s core e-commerce segment was profitable on an adjusted basis, earlier than the market expected.

We recommend investors watch for the early signs of a recovery in this week’s results.

As Gloria Gaynor said, “I know I'll stay alive, I've got all my life to live”.