The past 25 years have seen a transformation in the way the world produces and consumes food. Population growth has driven some of the revolution but so has a benign economic backdrop – the shocks of the Dot.com bubble and global financial crisis notwithstanding: even in those moments of economic uncertainty, bread and milk prices did not soar and the range of food expanded further. Globalisation and JIT (just-in-time) supply chains meant that groceries and supermarkets made exotic products and out of season flowers, vegetables and fruits available at any time of year – and, with the advent of food delivery apps like Instacart, Amazon Prime Now, Grab, Uber Eats, and Gorillas, at any time of day.

As the range of food available expanded as it became cheaper, so more people, and a greater percentage of the population, were able to eat formerly exotic delicacies such as avocado, sushi, or mozzarella. Between 2013 and 2021, fresh avocado imports into the US rose from 1.2bn pounds weight to 2.6bn pounds (1.2mn metric tons) – in addition to domestically grown fruit. In the same period, the annual consumption of avocados per capita in the US rose from 5 pounds to nearly 9 pounds (4kgs of avocado per man, woman and child). That is a lot of avocados. In the 1970s, they were the preserve of high-end restaurants and Upper East Side dinner parties, now they are available at 2am to anyone in a city with a smartphone.

The Western world may have addicted itself to ultimate choice and free availability but, in the developing economies, it is grains that provide the staple food to many. In 2010, a series of extreme weather events hit many of the largest grain and food-exporting countries, including Russia, Ukraine, Canada, Argentina and Australia, and led to a 30%+ increase in global food prices. A 'Rossby' heatwave ignited wildfires that swept through south-west Russia, destroying crops and thousands of homes and claiming dozens of lives (the same heatwave caused destructive flash flooding and landslides that killed hundreds in Pakistan), Argentina and Australia suffered severe droughts, and crops in Canada were destroyed by exceptionally heavy rains.

The Middle East absorbs one-third of all grain imports: particularly in economies like Egypt, bread is the staple food of the poor and, consequently, accounts for a proportionately larger component of people’s disposable income. The series of riots and public demonstrations seen across much of the Arab World in the early summer of 2011 – the 'Arab Spring', as it became known – was driven by a number of factors, but frustration over bread prices and food inflation was one of them. Riots and political upheavals rocked Tunisia, Morocco and Bahrain, caused the collapse of the Mubarak government in Egypt, and led to the chaotic civil wars in Libya and Syria. 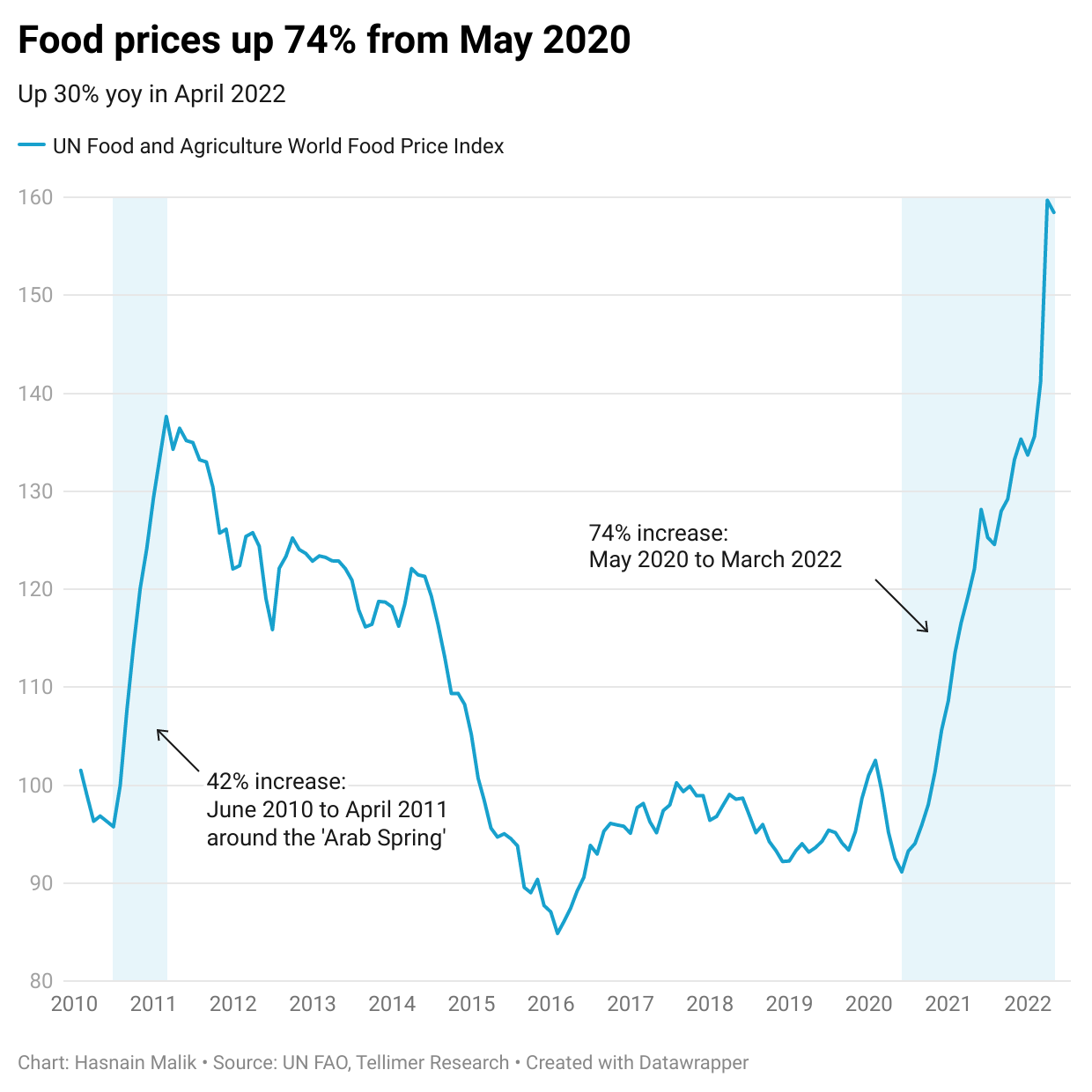 The disruption caused by the global pandemic, exacerbated by the conflict in Ukraine, has led to record food commodity prices: in relative and absolute terms, exceeding the dark days of the early 1970s, when an energy shock was followed by rampant food inflation. Protests are, in fact, rising globally as the world recovers from Covid, as my erudite friend and colleague Hasnain Malik has noted. 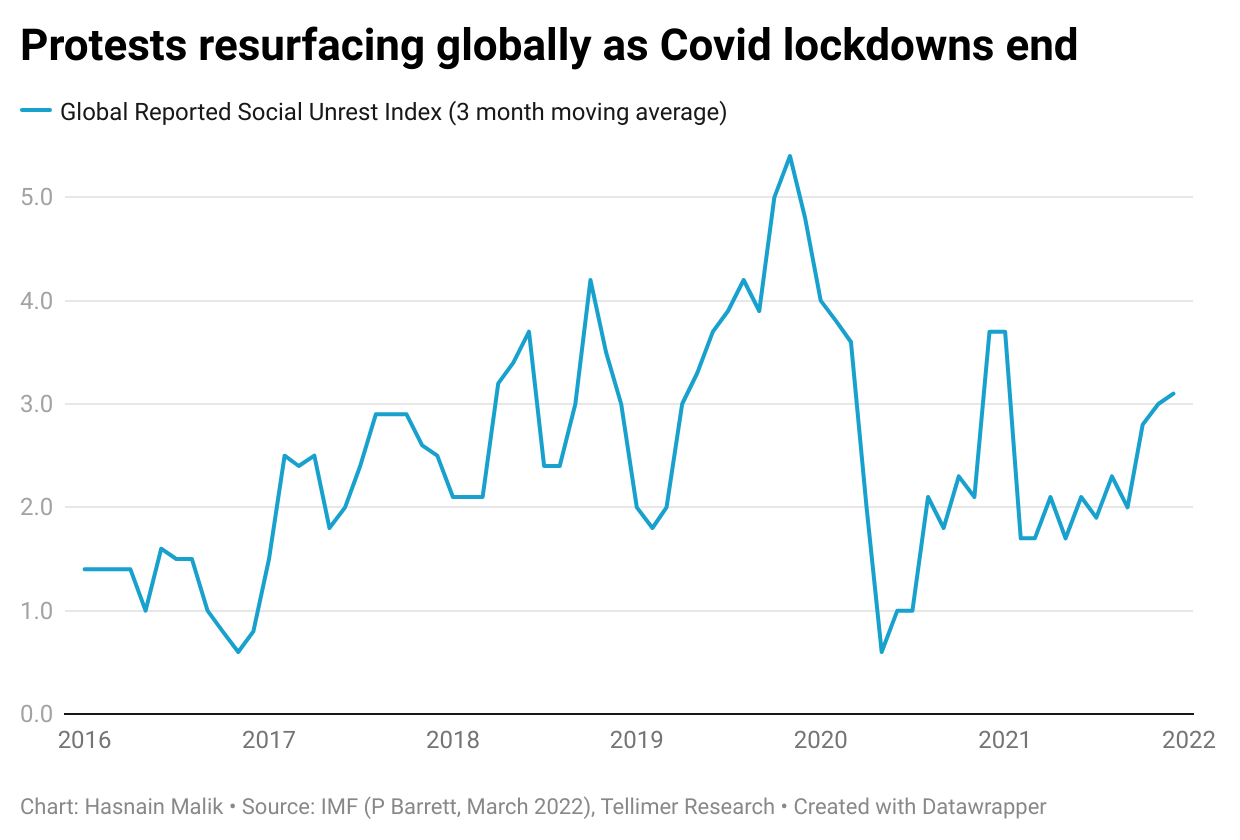 In current events, one can discern the climate-food-politics-geopolitics cycle, and how interrelated global issues now are: how a Rossby wave can put the G7 and G20 on a collision path and contribute to Russia invading Ukraine. See my previous Scriber essay on the related geopolitics. 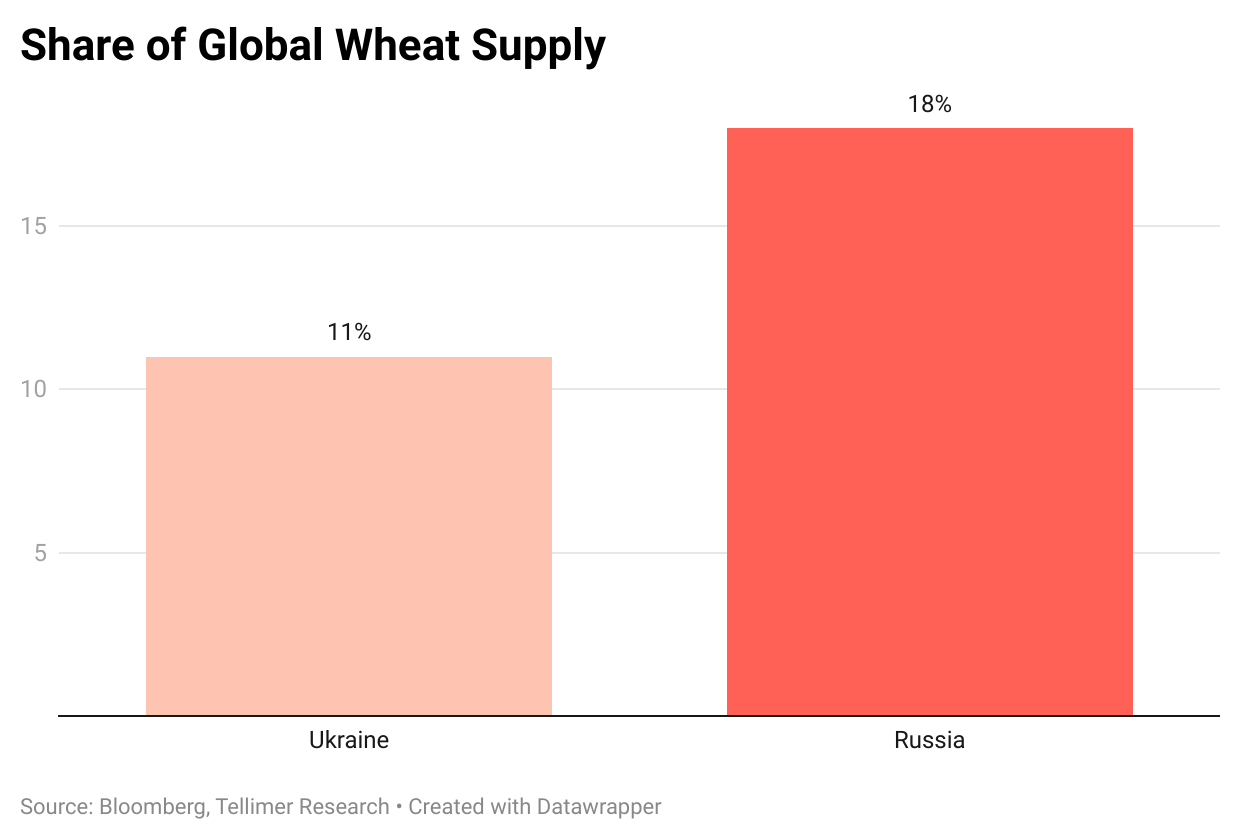 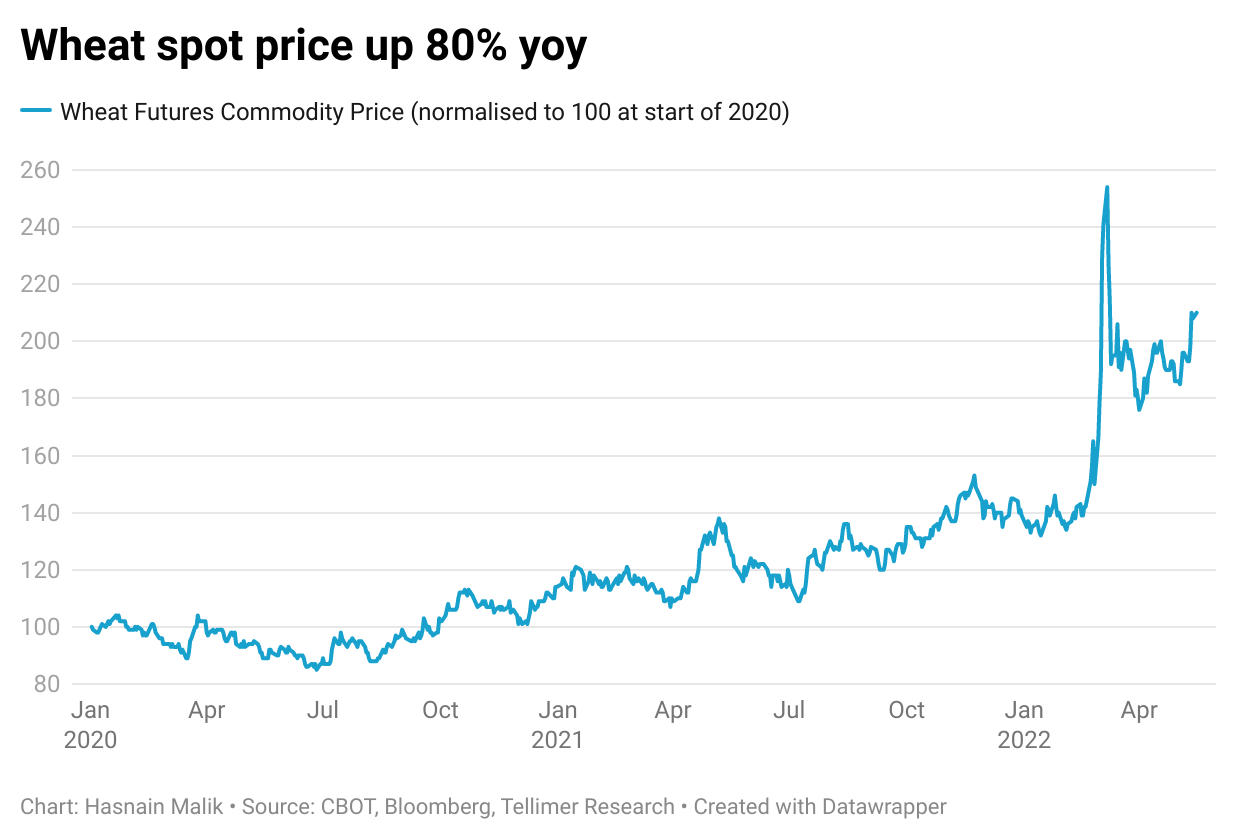 With growing concerns about food affordability and availability, China and India have already imposed protectionist measures, reducing exports to improve their own food security. Last week, China publicly rejected the G7’s criticism of India’s recent wheat export ban via its state-controlled English language news site Global Times; making the point that it is not helpful for the West to blame developing economies for the situation. The Chinese have a point, in as much as the US and Canada are among the planet’s largest grain exporters, while China, Brazil and India (three of the big boys of the G20 not in the G7) are net importers. There is political power in food.

The Economist Impact Food Security Index, which scores countries on the basis of food affordability, availability, quality, safety, natural resources and resilience, places Russia at 23rd, China at 34th, Brazil at 63rd and India at 71st. The US has the 9th best score, Canada is 7th and the UK sits near the top, in 3rd (the Republic of Ireland is top, with relatively low population density, lots of agricultural land and, as those who have been there will know, plenty of rain).

Among the most vulnerable countries are those in Sub-Saharan Africa, South Asia and the Middle East (the 'contested areas' of the Tri-Polar world, that sit between the great power blocks of the US, Europe and China), as shown in the table below, which shows the scores of a selection of key emerging markets, as well as the US and Europe's average for the purposes of comparison. 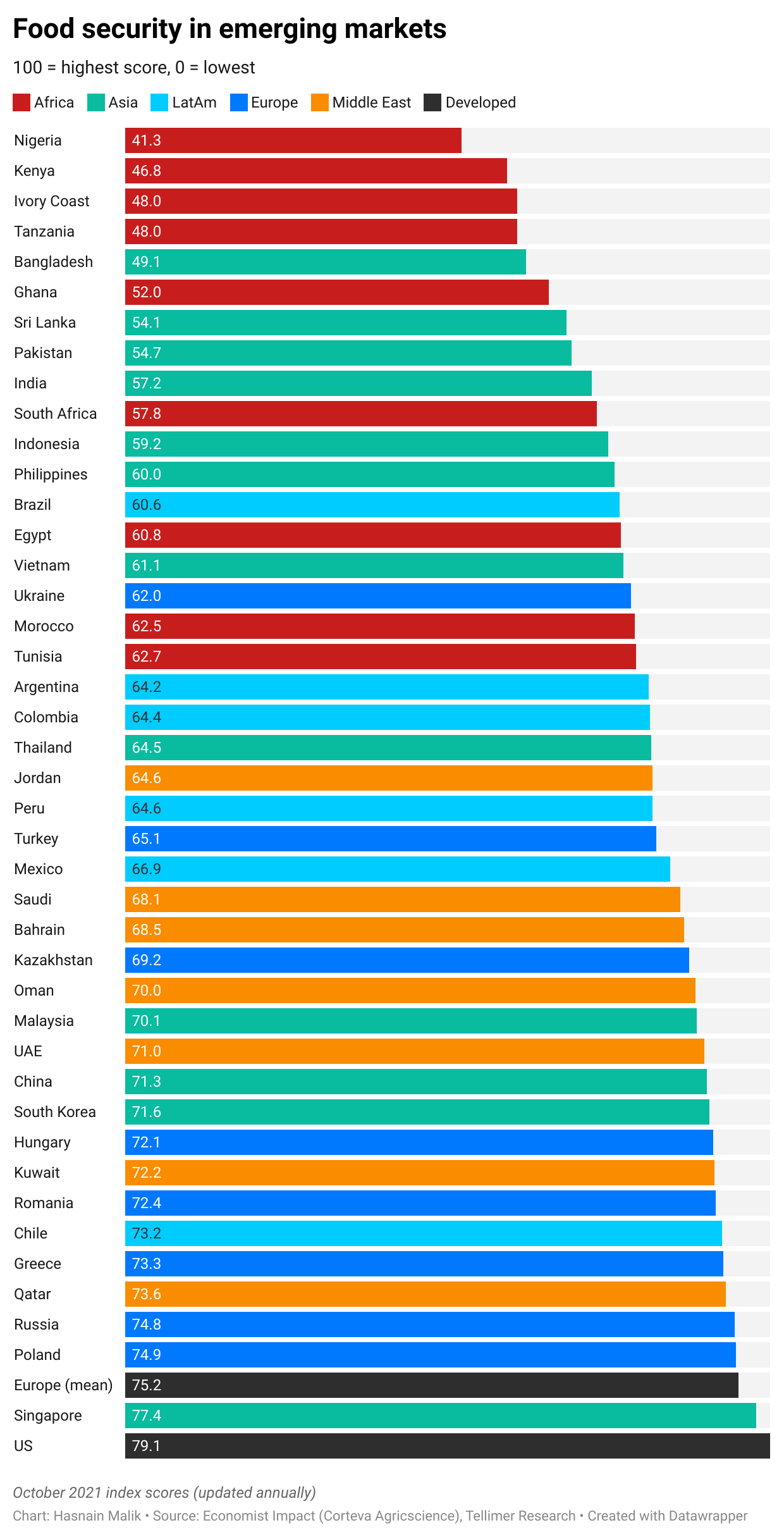 As the price of food soars on rising energy price rises and the risk of recession, it is hard not to think that it will drive the climate-food-politics-geopolitics cycle once again. Even for well-off urbanites, avocados will become more expensive and less available. Countries with weak food supply chains and low per capita incomes are vulnerable to genuine human and political catastrophe: for the hardcore investors and policy-makers out there wanting to understand more, see Hasnain Malik’s recent research on Tellimer Insights.

This will be an uncomfortable ride for everyone, but for those based in economies with good Food Security Index rankings – much as the cost of living is going up rapidly and will undoubtedly cause hardship for many – we should all count ourselves lucky.

This "Perspective Pool" report was first published on Scriber, the only email newsletter & web publishing platform built for finance experts, by finance experts.