Some six months after Ethiopia’s surprise announcement that it would seek a debt treatment under the G20’s Common Framework, the fear that this may lead others to follow suit has not materialised. There has been no rush to the exit and concerns over who might be next have subsided.

To date, only three countries (Chad, Ethiopia, Zambia) have announced their intention to seek a Common Framework restructuring, although they are not the same and are moving at different speeds.

Indeed, rather than encourage others to follow, perhaps the mixed reaction to Ethiopia’s request has deterred others from doing so, together with the significant improvement in EM financing conditions since the Common Framework was announced last November.

In fact, despite the broadening in scope since its launch to include liquidity as well as solvency situations, among the 22 countries with bonds that are eligible for the Common Framework (out of a total of 73), there are perhaps only a small handful of countries for which it may remain relevant (barring another shock).

But uncertainty still remains. No one else has sought to do the same, nor has any existing case been concluded, so we remain none the wiser over how this initiative actually works. Investors will be watching the existing cases, especially Ethiopia and Zambia, which have bonds, for clues as to how the Common Framework unfolds. 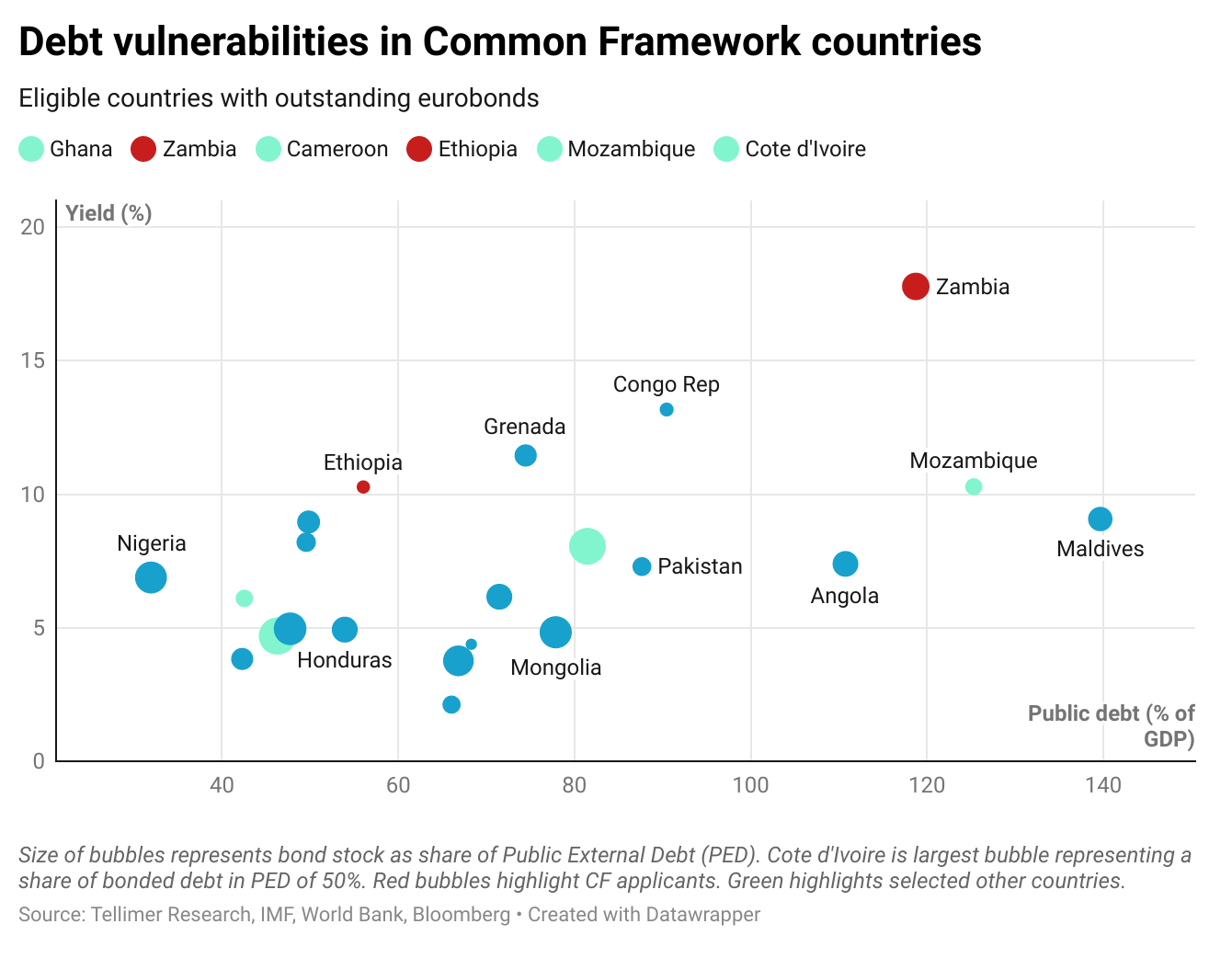 The Common Framework for Debt Treatments beyond the debt service suspension initiative (DSSI), a debt restructuring initiative for eligible low income countries (LICs), was announced at the G20's Riyadh Summit in November 2020. It was born out of the DSSI amid concern among policymakers about the post-pandemic rise in public debt burdens and recognition that the DSSI's temporary debt service relief was insufficient to address deeper-seated debt vulnerabilities. It aims to provide timely and comprehensive debt relief for eligible countries.

As the IMF warned, debt levels were elevated even before Covid, with half of low income countries at high risk of debt distress or already in distress. Covid risked tipping many of them over the edge.

Specifically, the Common Framework sought to address two areas of concern in DSSI. First, the lack of private sector participation in DSSI, which despite encouragement from the official sector, was voluntary. Second, as DSSI was only intended to be a short-term solution, providing temporary cashflow relief, it did not address (and was not intended to address) an unsustainable debt situation.

It allows Paris Club and non-Paris Club lenders to coordinate in providing debt treatments and, by extending Paris Club procedures to non-Paris Club members in the G20, bringing together a combined group of 30 countries, it builds on processes that are already familiar. To that extent, this is nothing investors aren't already used to.

This is a major step forward in the sovereign debt architecture. Although, in essence, the Common Framework therefore looks like a typical Paris Club debt restructuring, bringing non-traditional bilateral creditors to the table is the crucial innovation. It reflects the fact that the composition of creditors has changed significantly over the past decade, with the Paris Club declining in significance and the rise in non-traditional, especially Chinese, lending. Failure to cater for this shift has been a gap in the traditional international financial architecture, something we have long recognised.

Crucially, the Common Framework requires debtor countries to seek comparable treatment from other bilateral creditors and private creditors to ensure fair burden-sharing, although private creditors have long been used to this principle in previous Paris Club restructurings. This is a clear distinction with DSSI. With DSSI, seeking comparable treatment was voluntary. Under the Common Framework, debtors are “required to seek” a debt treatment, which is “at least as favourable” as the one agreed in the memorandum of understanding with the Paris Club/G20 group of creditors.

The Common Framework adopts a case-by-case approach, with a tailor-made treatment to restore debt sustainability or to address medium-term liquidity issues where needed. That the Common Framework can address both solvency and liquidity issues is important, and something that the official sector only clarified at a later stage. The initial understanding was that the Common Framework was directed only at those with an unsustainable debt situation. A debt treatment can therefore range from a deep debt reduction to a debt reprofiling in cases where this can help meet temporarily high financing needs.

Countries requesting a Common Framework treatment do, however, have to have, or seek, an upper credit tranche (UCT) IMF programme.

But there is still a lot we don't know about the Common Framework and how it will work; we only have the G20's two-page term sheet from Riyadh for detail, although an IMF staff paper and Sovereign Debt Q&A provide some additional information.

A trickle not a flood

Ethiopia’s was the second request, with its announcement on 29 January, shortly after it was revealed that Chad had also requested a treatment as part of its staff-level agreement on a new IMF programme. Zambia followed suit soon after, on 5 February, but it was already in default on its eurobonds, so its request was no great surprise.

The other surprise was that it took some two months from the announcement of the Common Framework in November 2020 to the first round of announcements by Chad, Ethiopia and Zambia that they wanted to take it up. Because the Common Framework was itself still somewhat embryonic, perhaps there was a bit of uncertainty on all sides over how it would actually work and what it would mean, given this was entering uncharted territory, and some time was needed to put a bit more flesh on the bones of the term sheet.

But even these three cases are not the same. Each has different characteristics and are moving at different speeds. Of the three, Chad and Zambia look more like solvency candidates, whereas Ethiopia looks more like a liquidity issue, while only two (Ethiopia and Zambia) have eurobonds. Zambia has defaulted on its bonds, Ethiopia hasn't. Chad doesn’t have eurobonds but it does have commercial debt, consisting of oil trader debt, which we know will be bailed in.

Crucially perhaps, in Ethiopia’s case, it is still not clear if a restructuring of the country’s bilateral debt will extend to the country’s sole eurobond, under the principle of comparability of treatment. The government has said it wants to exclude the bond, despite the comparable treatment clause. The bond is, after all, only 4% of the debt, and the government even paid the last coupon on 11 June. But whether omitting it will wash with the official sector (which is still smarting over the lack of private sector participation in DSSI) remains to be seen.

While showing key differences, investors will, however, still look at all these candidates for clues as to how the Common Framework works and what it might mean for others. And with Chad and Zambia somewhat special cases, attention may focus on Ethiopia. But, given their differences, it might be difficult to know what lessons might be applied to other countries.

After Ethiopia, investor attention did focus on who would be next and, among those with outstanding eurobonds, Cameroon and Mozambique fell under the spotlight, although both countries sought to dispel such fears. Cameroon even issued a bond at the end of June, its first issue in six years. However, Mozambique's efforts to put distance between it and the Common Framework may be undone by its worsening security situation, if this persists for long and has more damaging economic consequences. Other obvious candidates, Laos and Maldives, have also managed to avoid seeking a Common Framework treatment.

In particular, we think small island nations and/or those countries that are more dependent on tourism (which may only return slowly after the pandemic) may be more likely candidates to seek a CF treatment in future (although not all of these candidates have bonds).

Indeed, only 22 out of the 73 countries that are eligible for the Common Framework have international bonds, amounting to a total outstanding of US$78bn (after two of the original 24 have since retired bonds, Fiji and Tanzania). Of course, others may have other commercial debt (loans), such as Chad, but we are only focussed on bonds here. 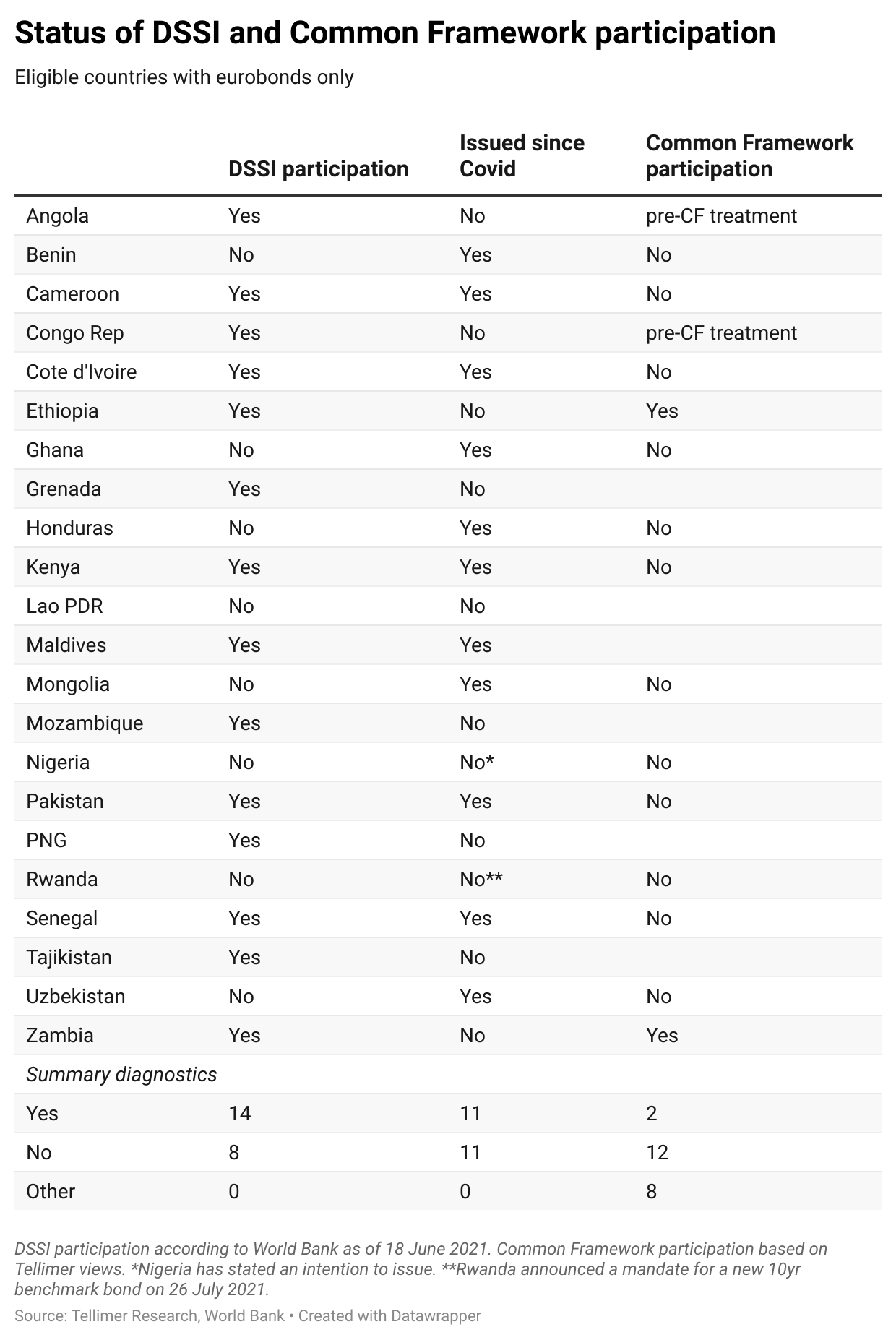 After Ethiopia and Zambia, that leaves 20 other potential cases. Excluding Angola and Republic of Congo, both under what we might term pre-Common Framework treatments, that leaves 18. And there is a smaller set still if we assume those countries that have issued a eurobond since Covid do not need to seek a Common Framework treatment (even if they have sought DSSI relief); half of the countries with eurobonds have issued one since Covid, rising to 13 if we include Rwanda and Nigeria which intend to do so, although that becomes 12 if we exclude Maldives (which we don’t think is out the woods yet). This leaves a more realistic universe of six countries that could still look to the Common Framework (Grenada, Laos, Maldives, Mozambique, PNG, Tajikistan). And of course, if Angola and Republic of Congo don’t work out under their existing arrangements, a Common Framework treatment would be the logical (and necessary) next step for them.

And, while some vulnerable eligible countries may be waiting to see what happens to Ethiopia before they decide whether to seek a Common Framework treatment, others may have seen the adverse reaction to Ethiopia as a reason not to pursue it.

Moreover, instead of the Common Framework, countries that have market access have relied on issuance and, crucially, shrewd use of LMOs to manage near-term debt service humps.

DSSI is winding up

Meanwhile, the DSSI is coming to an end after the final extension to end December 2021 was announced in April. So far, the Paris Club has granted final DSSI treatments to only five countries, although other requests may have been made and more will likely follow.

That DSSI will come to a conclusion could, however, provide the spur to some of the more vulnerable countries to seek a Common Framework treatment.

Issues with the Common Framework

We highlight a number of issues for consideration: 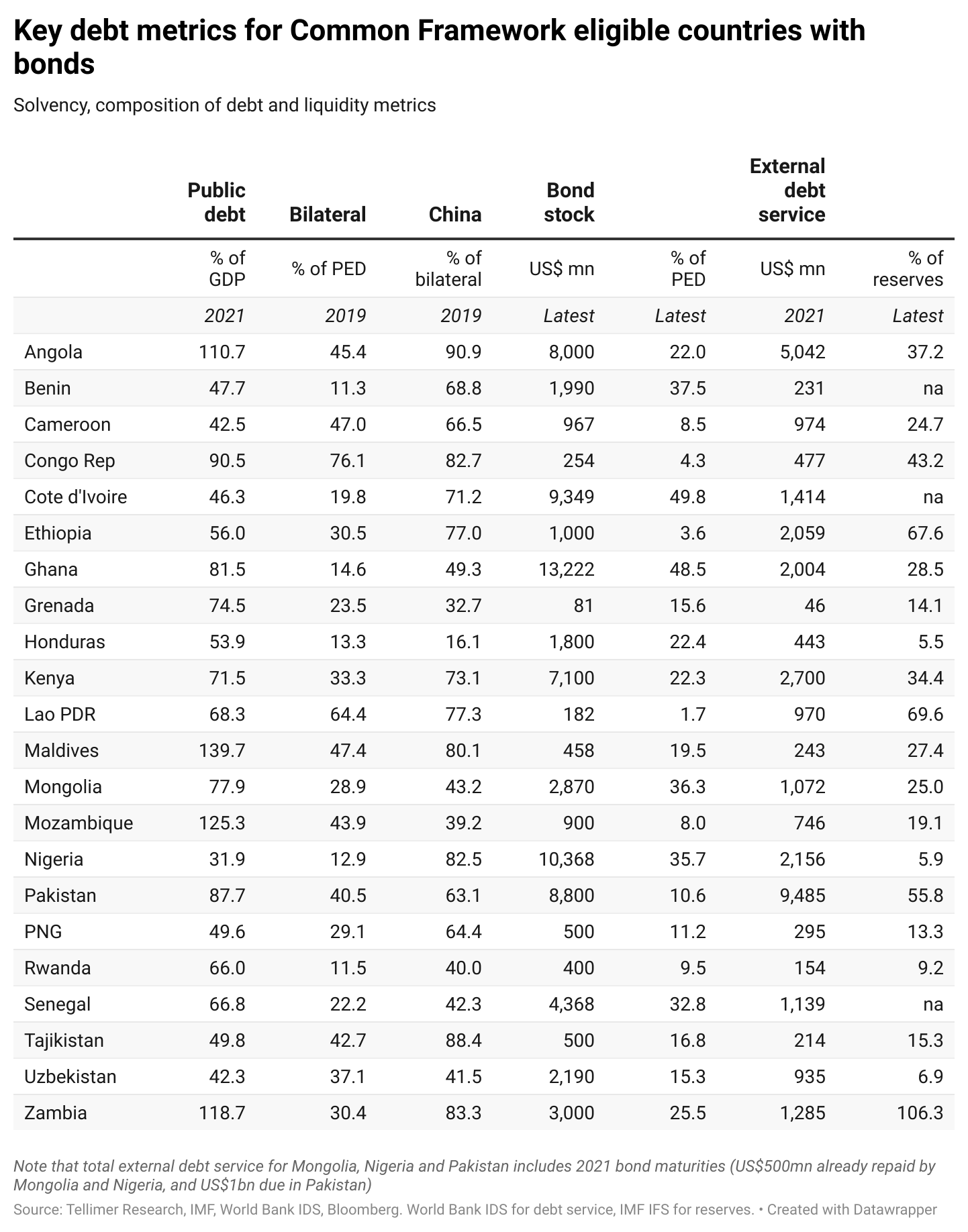