The USD index has risen by 5% so far this year. Among major currencies, JPY has declined by more than 10% over this period. Within emerging markets, Latin America has been hard-hit by US dollar strength, with currencies in Argentina, Chile, Colombia and Peru all down over 10%. Eastern Europe (notably Poland, Hungary and Romania) has also suffered. But the Turkish lira has declined most, losing more than a third of its value, although it can be argued much of this is self-inflicted. With the US Federal Reserve slowing its bond-buying activity, and commentators looking for US interest rates to rise, currency risk could play a key role in emerging market equity performance over the coming months. 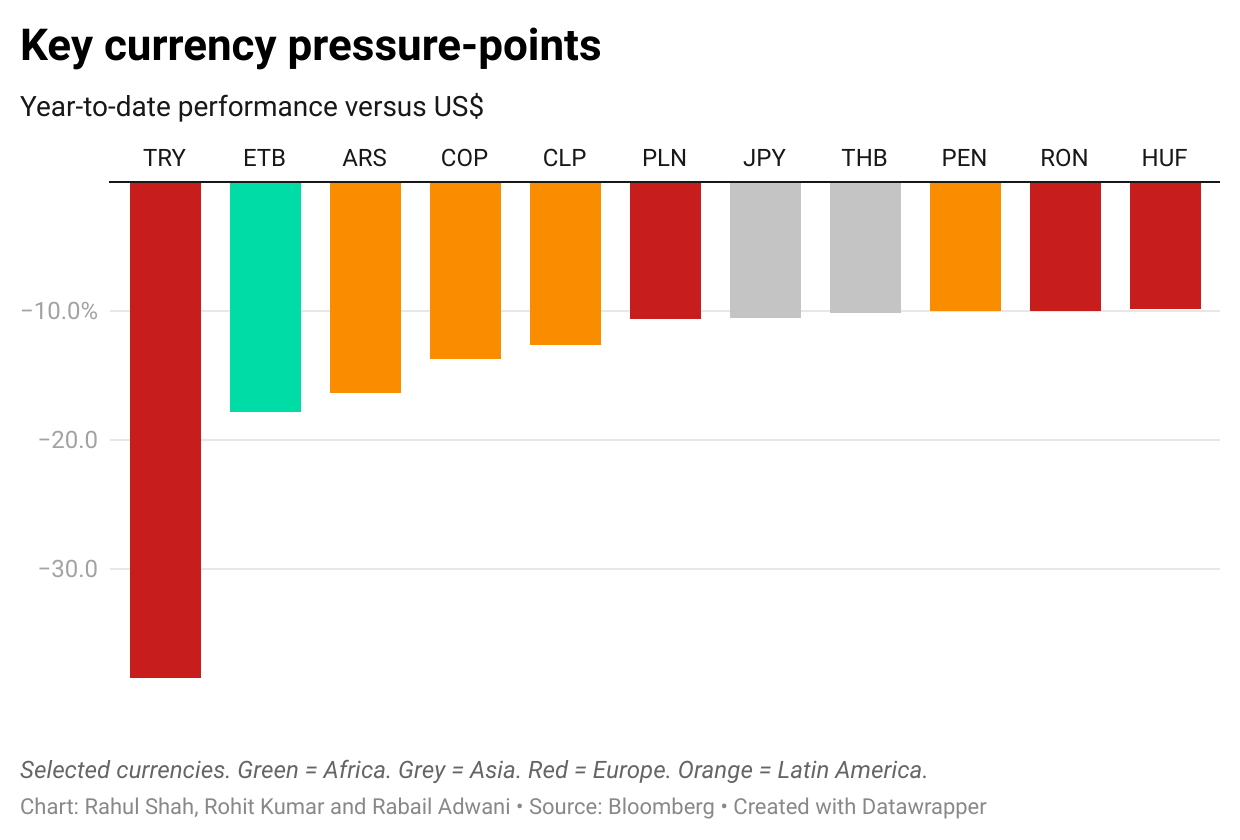 Most emerging market banks generate open foreign currency positions during their normal course of business; for example, they may issue hard-currency bonds, or they may provide foreign currency loans to exporters. Where such positions are structural, these banks can provide equity investors with either a hedge against, or additional gearing to, currency movements.

To identify such names, we have examined the balance sheet disclosures of 91 banks across 39 emerging markets. Banks with net long foreign currency positions could generate translation gains, lifting their shareholders' equity, if their home currency were to depreciate. This could provide investors in these banks with a measure of protection against local currency weakness.

Among our sampled banks, those in 26 countries have net long foreign currency positions, while in the remaining 13 countries they have net short positions on their balance sheets. The median net long position across our sample markets is 4% of shareholders equity. The banks with the highest net long foreign currency position (relative to shareholders' equity) are in Hungary, the UAE, Thailand, Nigeria, and Trinidad & Tobago. Turkish banks have the largest net short positions. 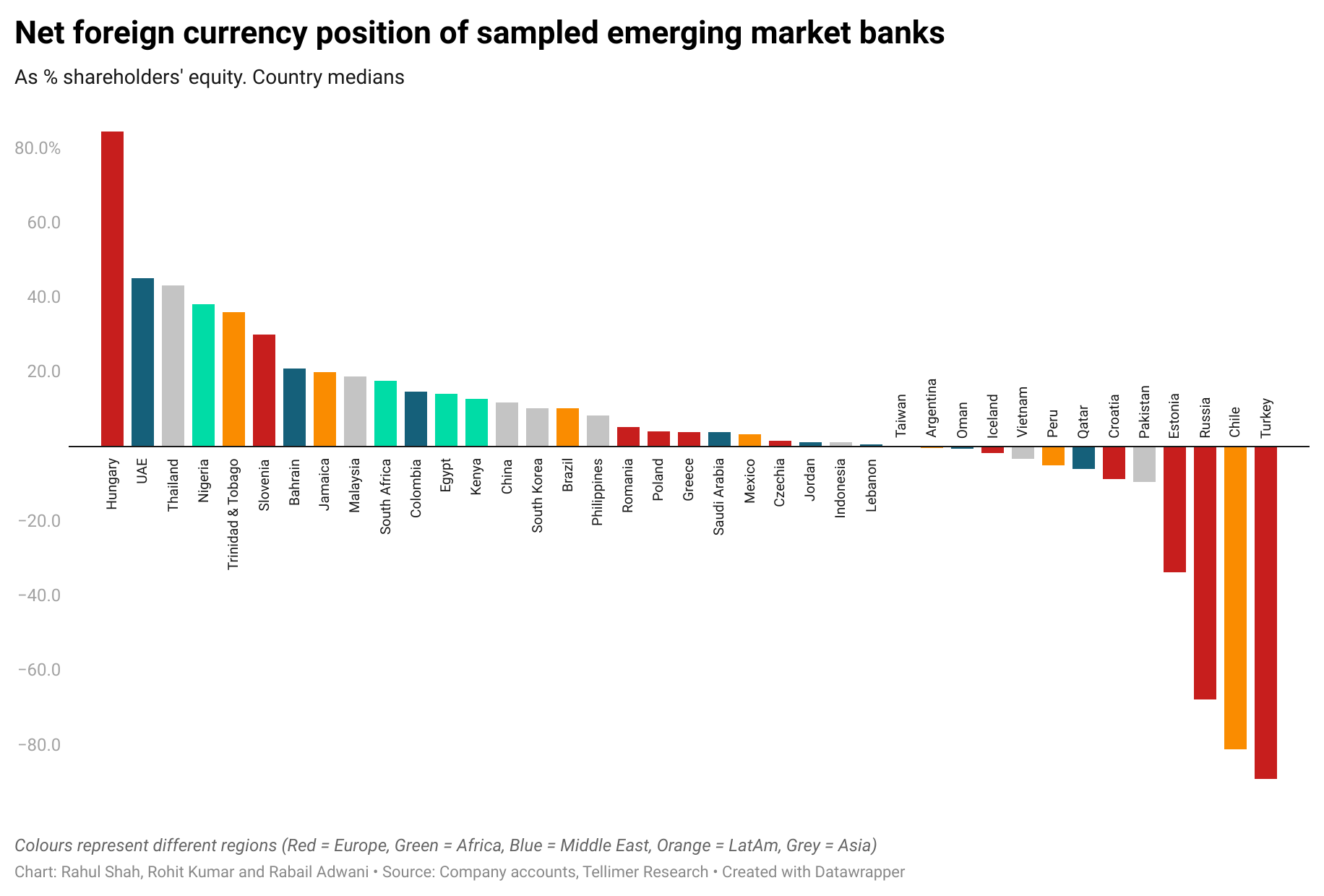 Two-thirds of our sampled banks are net-long foreign currency

The most misvalued emerging market currencies

Looking at real effective exchange rate (REER) positioning across emerging markets, many currencies are at sizeable deviations from their fair value. The most overvalued currencies on this basis are the Bangladesh taka, Egyptian pound and Kenyan shilling. The Lebanese pound is highly overvalued at its official rate but at the market price of c24,000, it is actually substantially undervalued. Other undervalued currencies on a REER basis include the Turkish lira, Argentine peso, and Brazilian real. 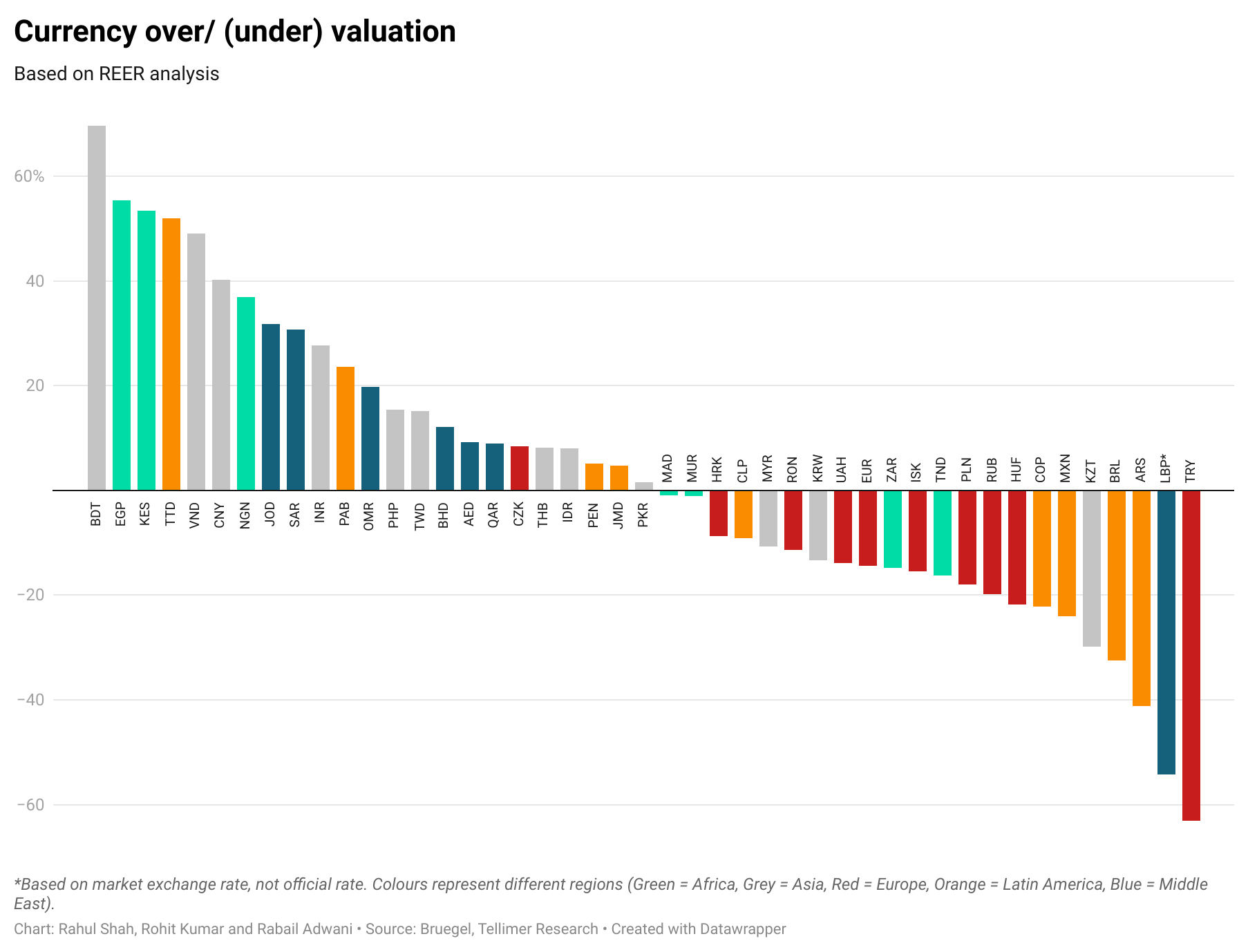 However, currencies can stay misvalued for long periods as other factors also come into play such as reserves, external debt, current account, and inflation. For example, the Turkish lira appears heavily undervalued based on REER, but factors like monetary easing, high external debt and doubts about the policy framework and central bank independence are currently taking precedence. In the Appendix, we have looked at some relevant quantitative metrics and present a simple relative ranking of currency risk on this basis. Based on this framework the currencies most at risk of depreciation include the Tunisian dinar, Egyptian pound and Kenyan shilling. Currencies with the potential to appreciate include the Taiwanese dollar, Russian rouble and South Korean won.

Comparing banks' net foreign currency position with the over/(under) valuation of currencies against their REER fair values allows us to identify banks offering the best hedging potential. Looking at the scatter plot below, the banks in the top-right and lower-left quadrants can help boost equity portfolio performance if these currencies normalise to REER fair value.

For overvalued currencies, banks with net long foreign currency exposures can help to offset the effect of future currency depreciation. Banks in Nigeria, Trinidad & Tobago, Egypt, Kenya are particularly interesting in this context.

For undervalued currencies, banks with net short foreign currency exposures could help give an additional boost to future currency appreciation. Banks in Russia and Turkey appear most relevant from this perspective.

In contrast, banks in the other two quadrants (upper-left and lower-right) could act as a drag on equity portfolio performance if currencies were to move to their REER fair values. Hungary’s OTP and Taiwan's Sun Financial stands out on this basis. 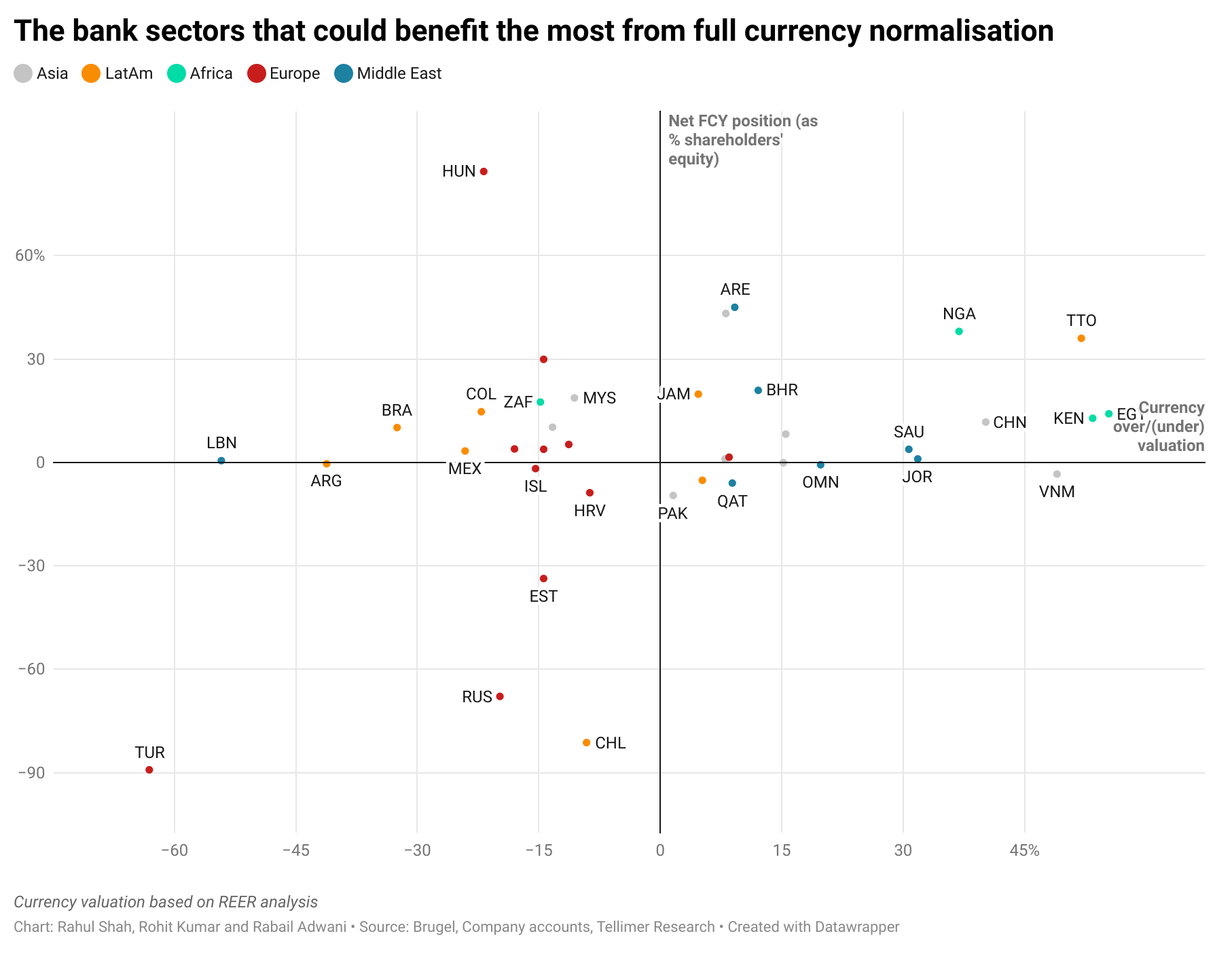 In the chart below, we drill down to the individual bank level. We also adjust the axes so that the x-axis measures the hedging effect on each bank's shareholders' equity (assuming the local currency moves to REER fair value) while the y-axis measures the total effect on shareholders' equity (ie currency movement + hedging effect).

The sampled banks that would deliver the biggest hedging benefits (ie are to the right of the chart) are:

However, the hedging/gearing effect is smaller than the overall currency move in almost all cases. That is to say, emerging market equity investors typically cannot use bank shares to fully offset currency risk. 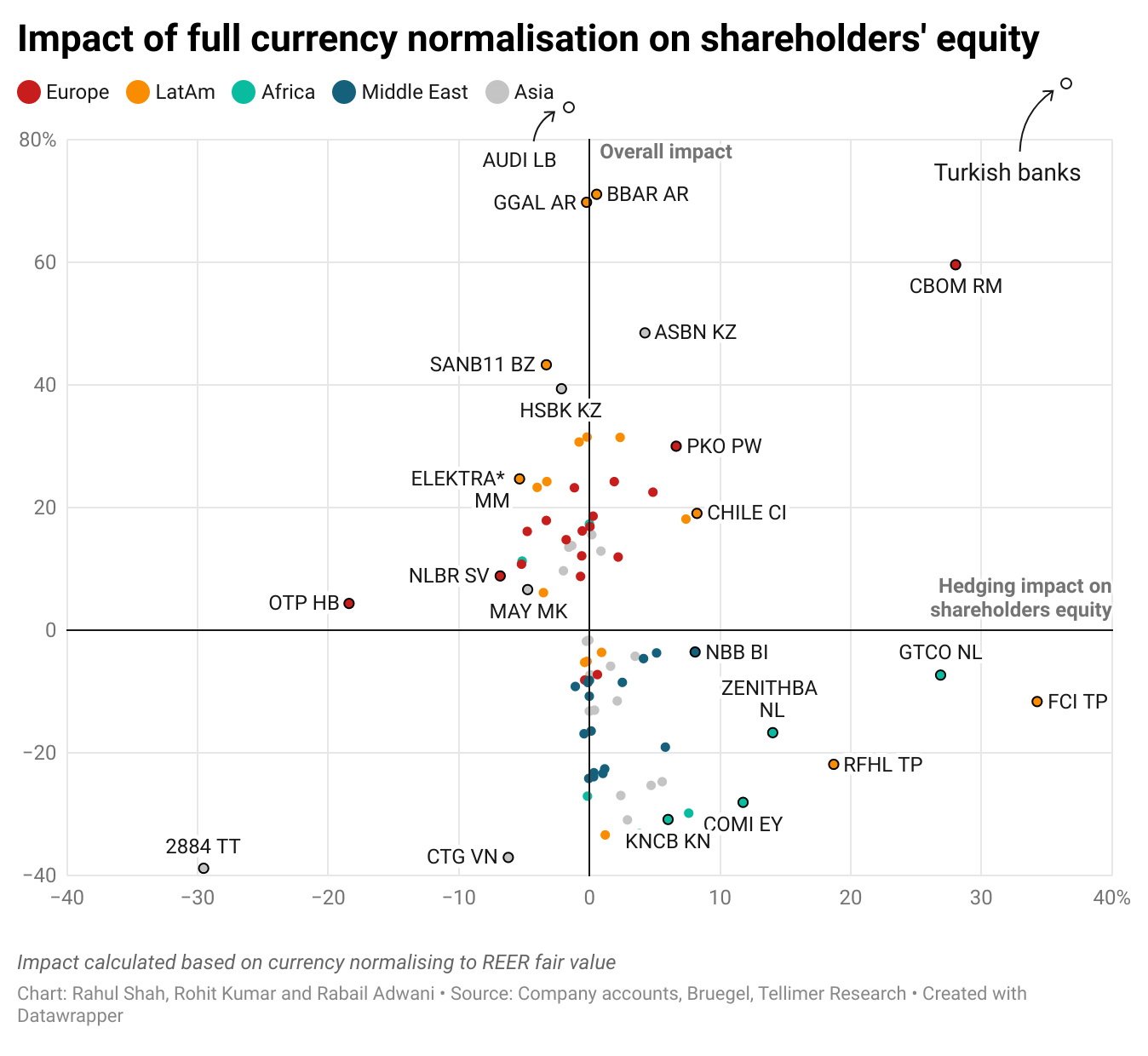 In the table below, we consider key currency indicators for each market: REER overvaluation, foreign reserves (expressed as months of imports), external debt (as % GDP) and the current account deficit (as % GDP). We present relative positions of markets for each indicator in terms of risk to currency devaluation; green= low risk, magenta = high risk. Weighting each risk indicator equally allows us to provide an overall risk rating for each currency.

Based on this approach, Tunisia, Egypt and Kenya have the highest risk of currency devaluation. In contrast, the currencies of Taiwan, Russia and South Korea could have scope to strengthen. 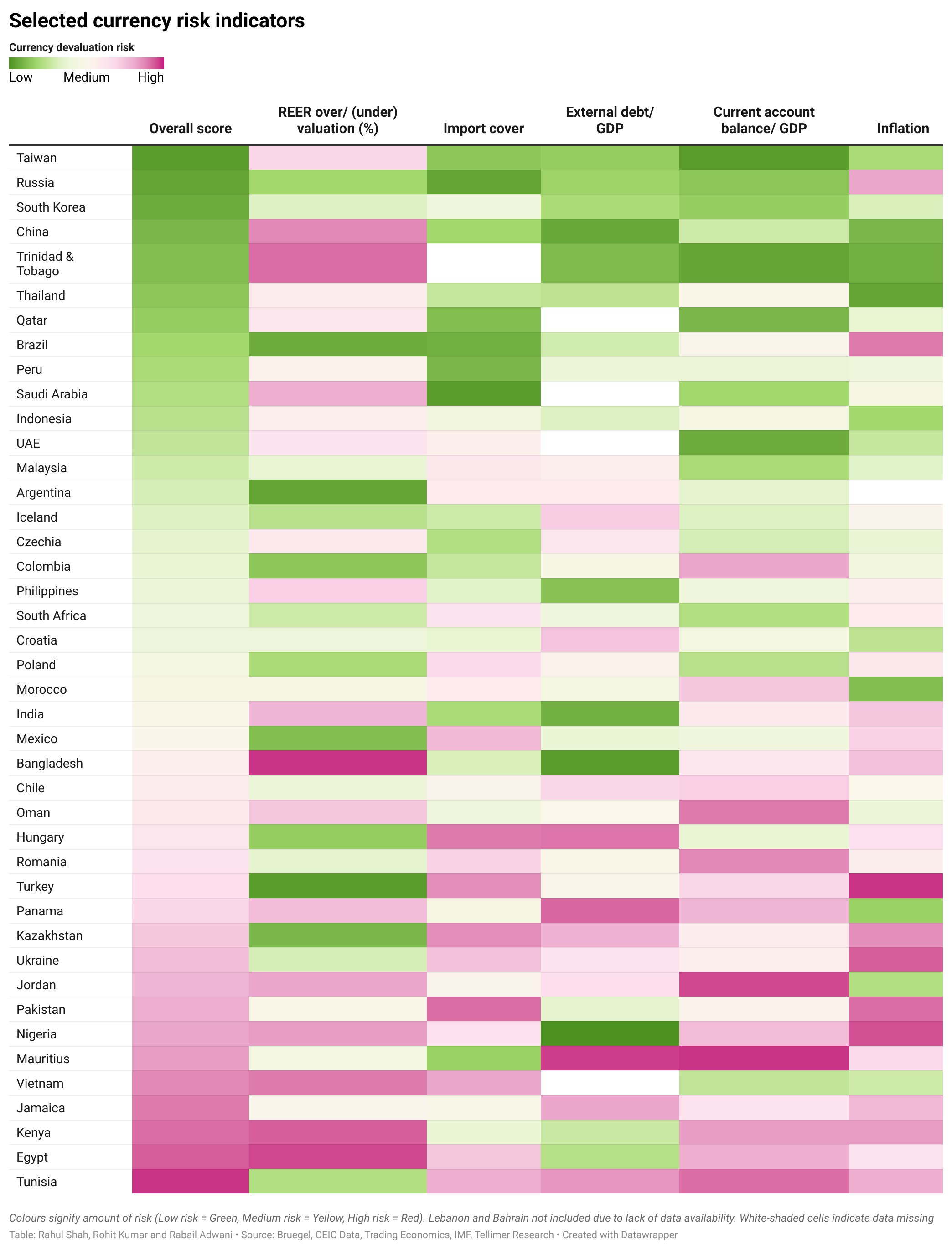