The emerging market banks most vulnerable to rising cost inflation

The post-pandemic economic bounce-back has generated labour shortages in many sectors of the economy; we are seeing record-low unemployment and high vacancy rates in several markets, and companies are being forced to raise salaries in the war for talent. Meanwhile, rising commodity and real estate prices, and ongoing supply-chain issues, are driving up non-staff costs.

In this report, we examine how rising input costs could impact investors in emerging market banks. Our analysis is based on bottom-up data from c100 large-cap emerging market banks. We conclude that earnings of the South Africa, Philippines and India banks (notably Nedbank, BDO Unibank, State Bank of India and ICICI Bank) are among the most sensitive to general cost inflation. In contrast, the earnings of many MENA banks (such as Al Rajhi Bank, FAB and QNB) will likely prove more resilient.

From a valuation perspective, we think banks in Peru and Colombia are overly discounting inflation-driven earnings compression, while the shares of South Africa banks are more exposed to this risk. In addition, investors appear to be overpaying for MENA banks’ defensive positioning.

Operating costs are typically equivalent to c40% of revenues for the largest emerging market banks. Around half of these costs tend to be in the form of wages and salaries.

For the largest emerging market banks (by market capitalisation), the cost/ income ratio is highest for banks in places like South Africa, Philippines and Hungary, and lowest in Qatar, Vietnam and Russia. 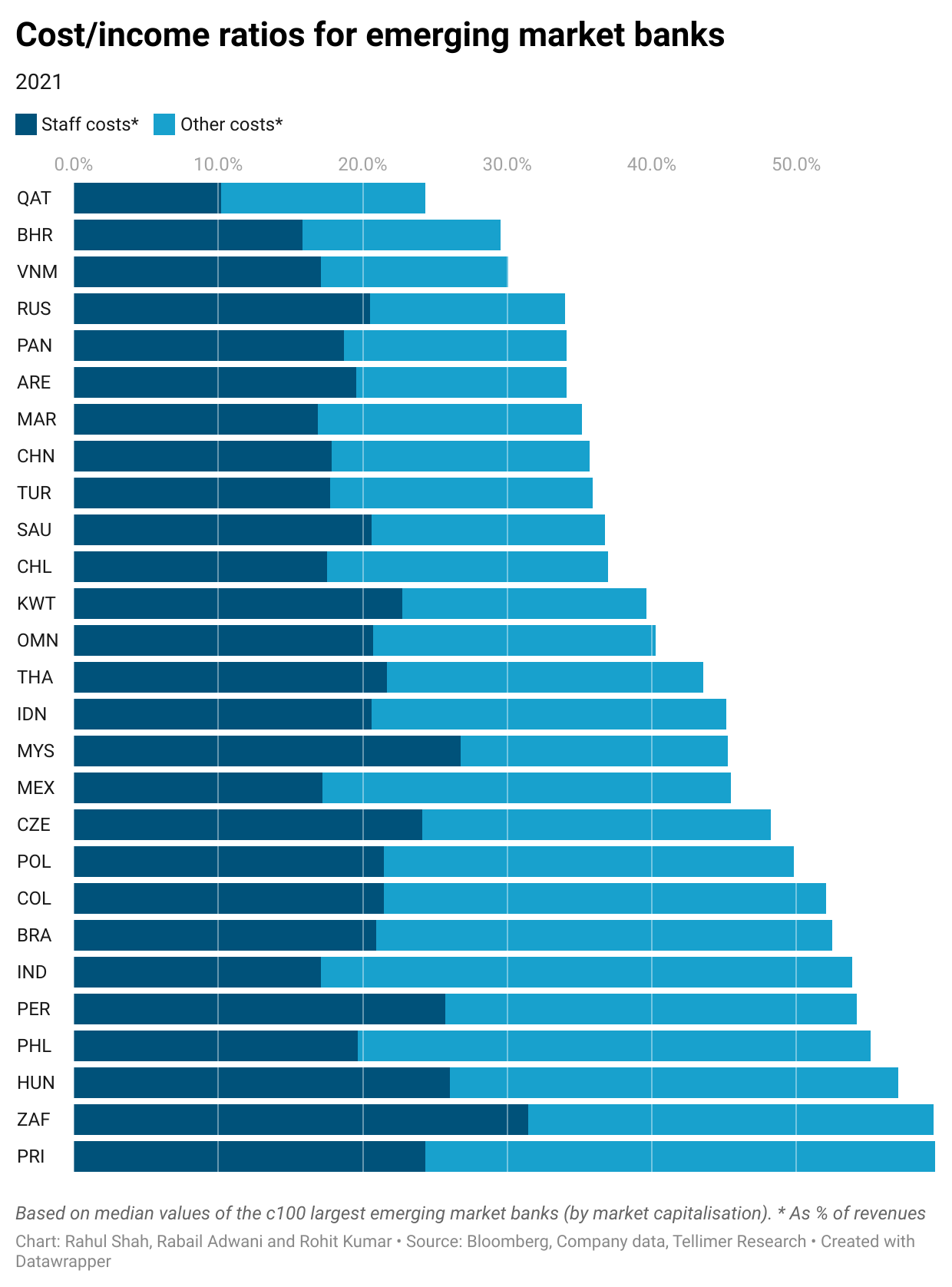 Perhaps of more interest to investors, operating costs are typically c100% of pre-tax profits. Accordingly, absent any changes in revenues, a 10% increase in operating costs would reduce the sector’s profits by 10%.

This sensitivity is highest in South Africa, Philippines and India banks and lowest in Qatar, Russia and Chile banks. 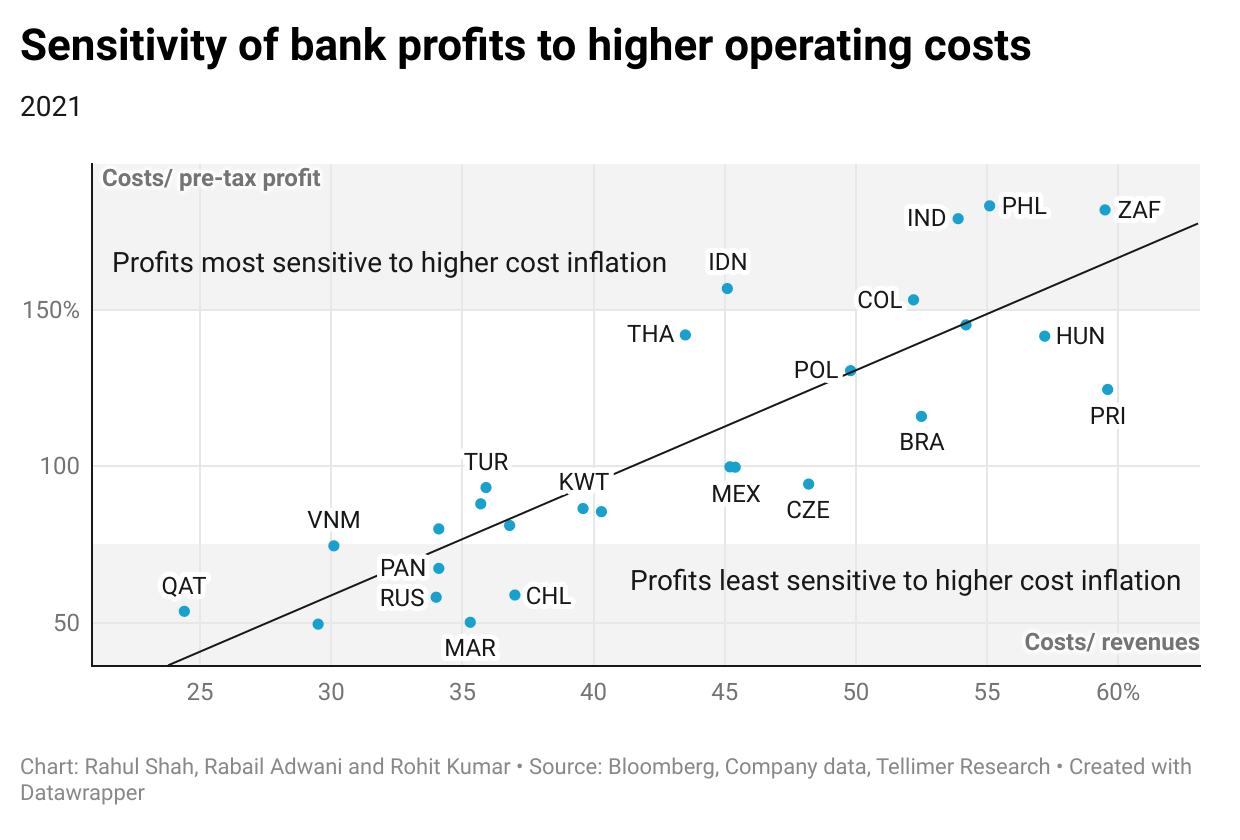 Valuations are already pricing in some inflationary pressure on earnings

Comparing banks' earnings sensitivity to inflation versus the current PE premium/ discount at which their shares are trading (versus their 5-year average), we see that investors have already started the inflation discounting process, but not in an aggressive fashion. Banks with higher sensitivity to cost inflation are typically trading at larger discounts. It makes sense that the relationship is not particularly strong; as well as company- and country-specific factors there are significant global macro factors that are also relevant to bank valuations, such as tightening monetary policy.

The valuation of banks in South Africa appears to be particularly vulnerable to higher operating costs, as their inflation gearing is high and they are trading at a premium valuation. In contrast, the market may be overly discounting the inflation risks of banks in Colombia and Peru, given their large valuation discounts. 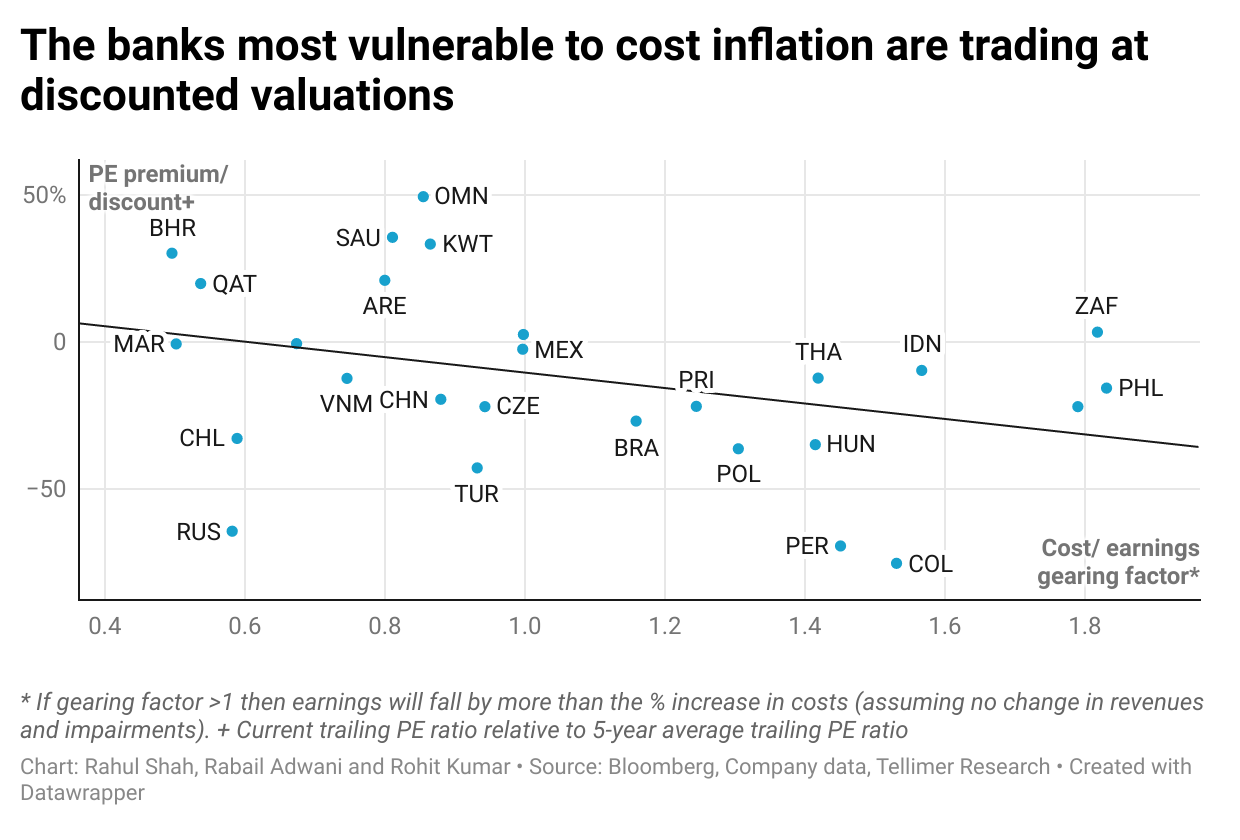 One way to gain better visibility on the investment opportunities in the sector is to flex the banks’ earnings (hence, PE ratios) for an inflationary shock. Factoring a 20% across-the-board increment in costs, while keeping steady other factors (such as revenues and risk costs) helps to neutralise the discounting that the market has already put through, as shown in the chart below (the best-fit line is now horizontal).

Another way to think about this is that the market appears to have already priced in 20% cost inflation (for example, via two years of 10% inflation). De-trending the data in this way allows investors to just focus on the PE premium/discount (the y-axis in the chart below).

The valuation of South Africa banks again shows up as being elevated, but the data also highlights that investors may be over-paying for the inflation protection offered by the MENA banks (which are in any case also vulnerable to any normalisation in oil prices). In contrast, although banks in Colombia and Peru do have above-average sensitivity to input cost inflation, this appears to be more than discounted in their valuations. (Russia banks also scan cheap, although this is not surprising given the stringent sanctions that have been applied against the country). 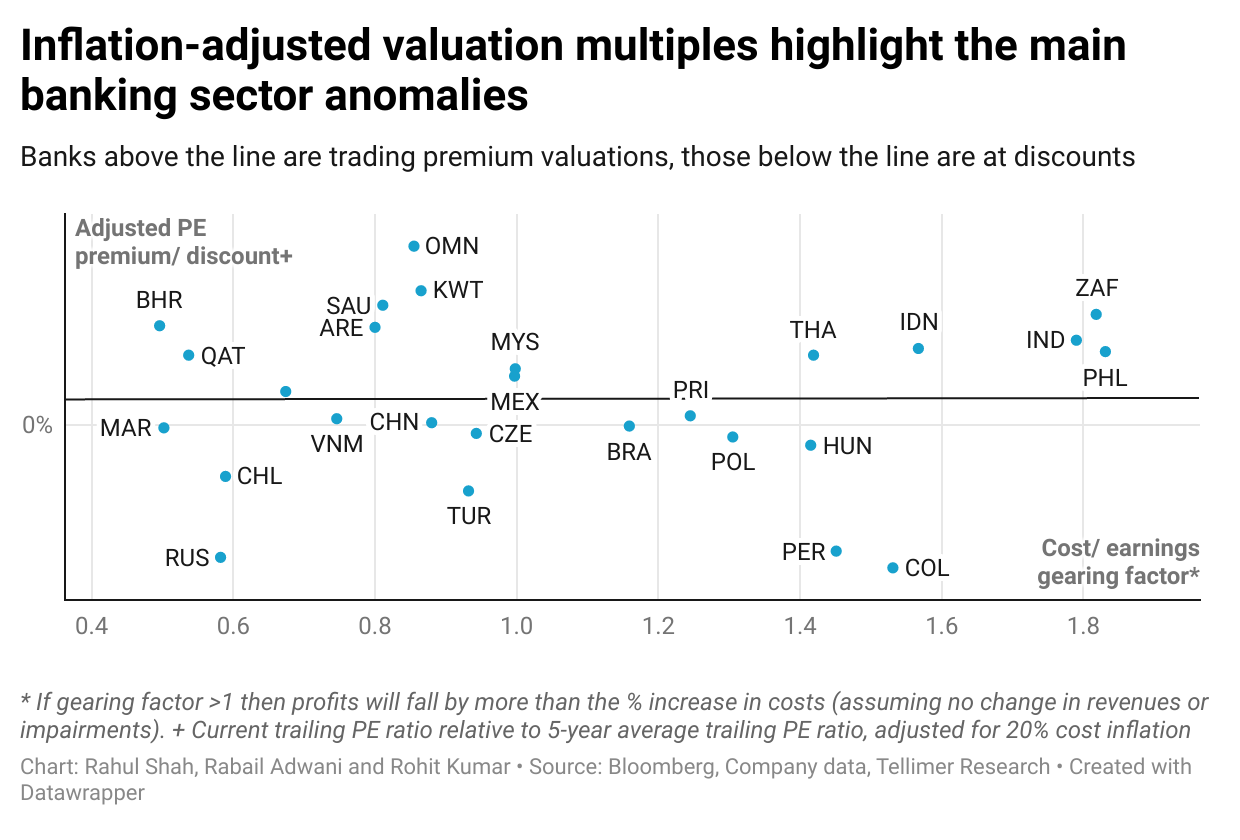