The emerging market banks most vulnerable to spiralling inflation

Inflation had already started creeping up last year, as economies emerged from pandemic lockdowns and supply-chain bottlenecks crimped supply. But Russia’s invasion of Ukraine, and the West’s response with crippling sanctions, have reduced the supply of a range of hard and soft commodities. The resulting price rises, disruption to trade routes and higher interest rates pose a significant threat to the global growth outlook.

Emerging market banks are likely to experience a downturn in financial performance, as loan growth slows and borrowers struggle to service their debts. In this note, we present our Bank Inflation Vulnerability Index to help investors identify where sector risks are concentrated. We determine that banks in Slovenia and Jamaica could find the new paradigm challenging, while those in Saudi Arabia and Mexico could prove more resilient. Incorporating a valuation overlay suggests Indian banks are not yet discounting these risks, while Philippines banks appear more attractively priced.

Recovering demand as Covid-19 lockdowns ease, along with supply-chain issues, have already driven up global inflation. For our sample of 45 emerging markets, the median inflation rate stands at 6.2% (and is over 50% in Argentina and Turkey), which is more than double the 5-year average rate of 2.9%. Inflation pressures seem most pronounced in Europe and Latin America versus Asia and the Middle East. 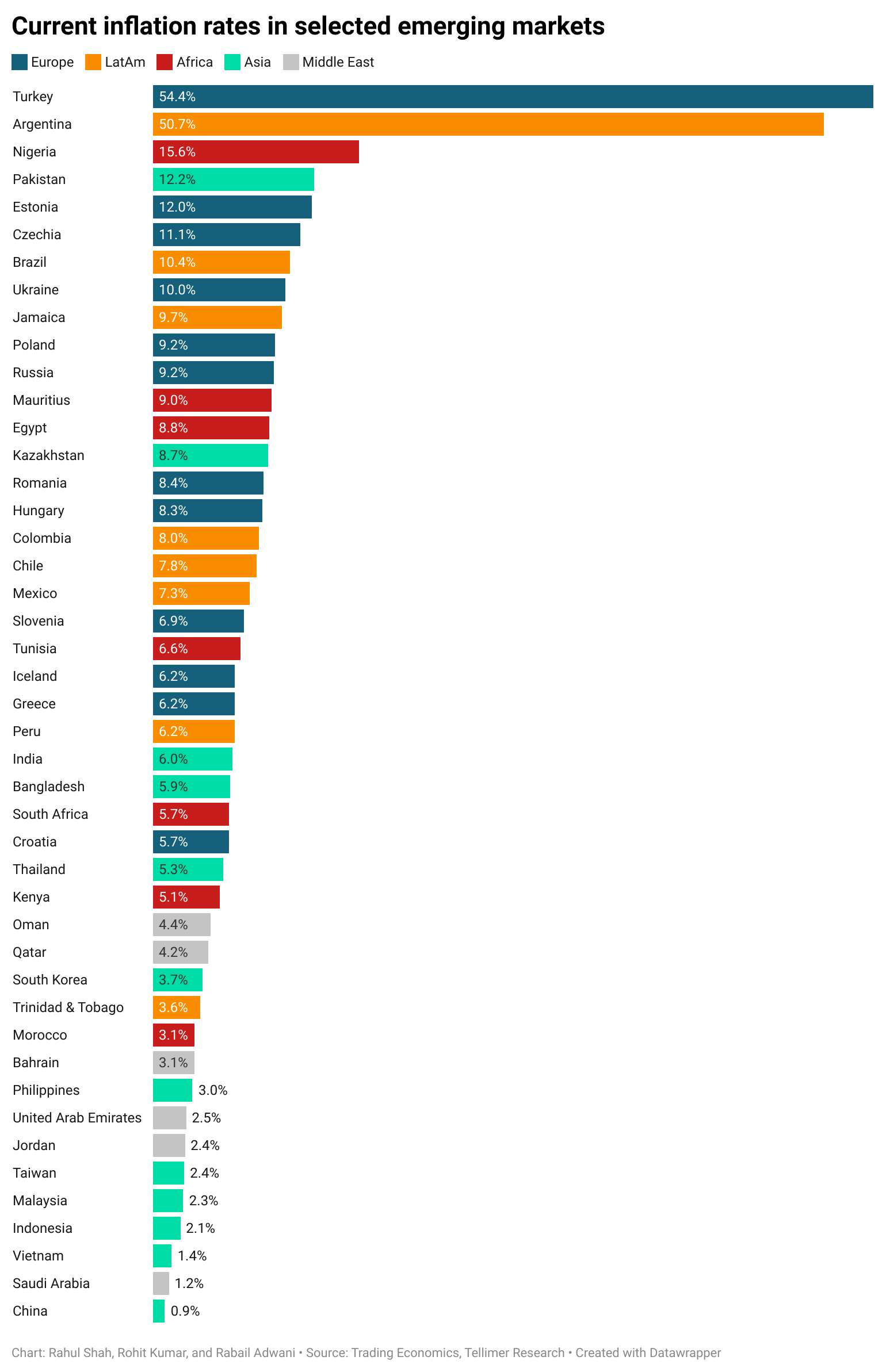 Moreover, these numbers will only increase. The impact of Russia’s invasion of Ukraine (and resultant sanctions) on hard and soft commodity prices is not yet reflected in reported inflation data.

Central banks have little choice but to raise interest rates

Most central banks have adopted an accommodative approach to monetary policy, to help cushion economies from the disruptive shock of the coronavirus pandemic. Moreover, until recently, many central banks have been measured in raising interest rates in the face of rising inflation – there has been a view that supply chain shocks (and hence the inflation pick-up) could be temporary.

However, due to Russia’s military belligerence and the West’s aggressive economic response, we are now in a different paradigm; nickel has hit all-time highs, oil and gas prices are at multi-year highs; investors are piling back into gold as risk aversion rises.

Historically, emerging market banks have tended to maintain interest rates above the rate of inflation – for example, the average real interest rate for our sample of countries over the past 5 years has been +1.3%. But the current figure is -2.1%. Therefore, merely to return to the historical status quo, central banks would need to raise rates by around 350bps points, and that number that will only rise as inflation accelerates over the coming months. Our data shows that Europe appears to be most at risk in this regard. 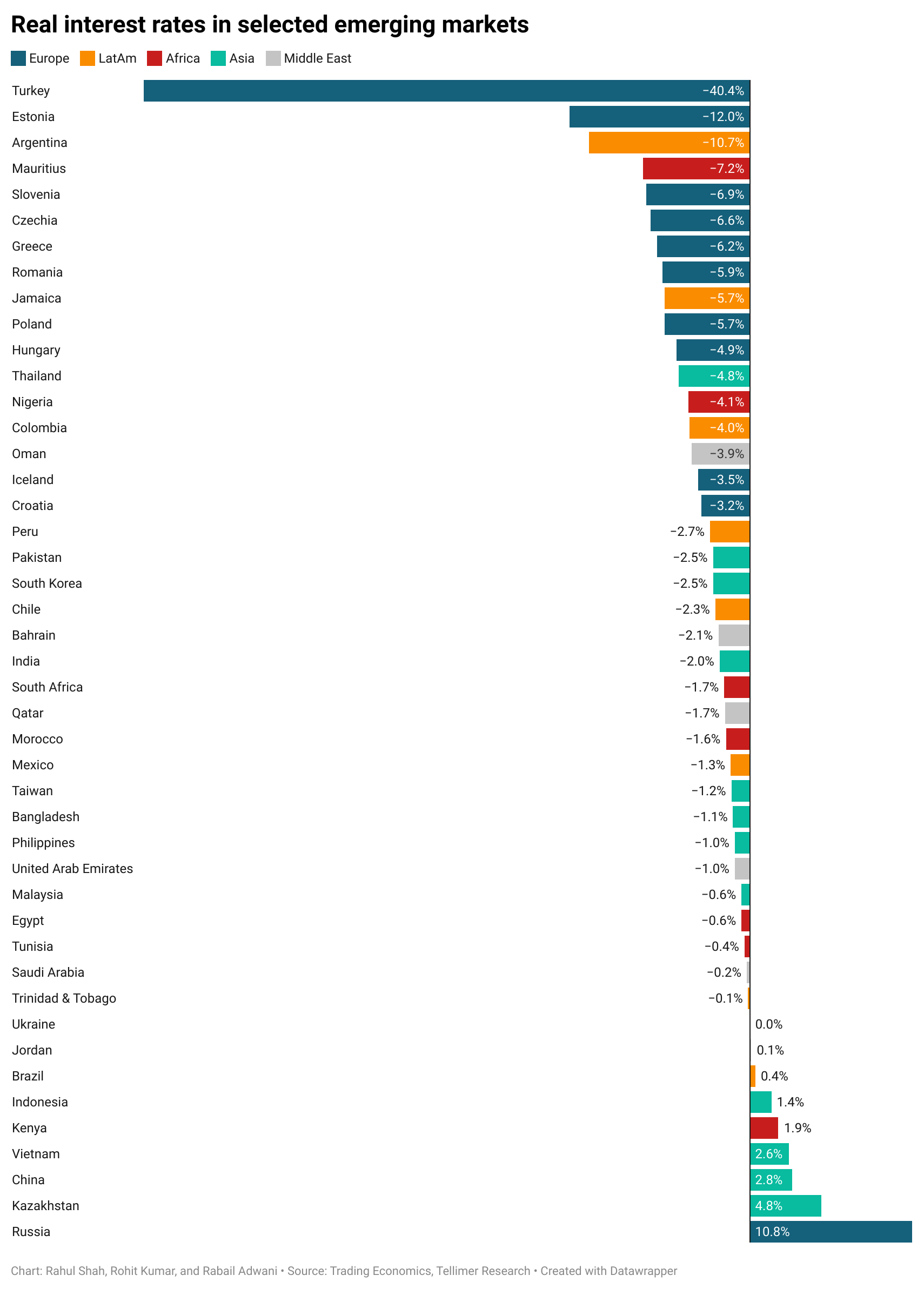 The impact of higher interest rates on banks

Higher interest rates have both positive and negative effects on banks’ finances. The key benefit is higher margins – most banks have more assets than liabilities that reprice with interest changes (largely due to their stocks of demand deposits and shareholders’ equity). Particularly at the early stages of the interest rate tightening cycle, we think this effect dominates, and we have written more about this here.

However, higher interest rates also carry negative implications for banks, and these effects tend to dominate at a later stage of the rate hike cycle. Even though the US Federal Reserve has only just started to raise its benchmark rate, several emerging markets have already increased interest rates substantially and may already be approaching this stage of the cycle

One negative effect is that banks’ portfolios of fixed-income instruments (such as government bonds, or fixed-rate loans) will typically be worth less due to higher discount rates being applied. This risk can be mitigated through effective duration matching of assets and liabilities (though most banks tend to be net long duration, due to their sizeable books of demand deposits).

Potentially bigger downside risks come in the shape of lower loan demand (due to weaker growth opportunities and higher financing costs) and higher credit risk costs (as existing borrowers struggle to meet higher borrowing costs). It is these two risks that we focus on when building our bank inflation vulnerability index. Other factors include reduced bank risk appetite, which would translate into lower loan growth (as highlighted above) but also less appetite for fee-generating activities. 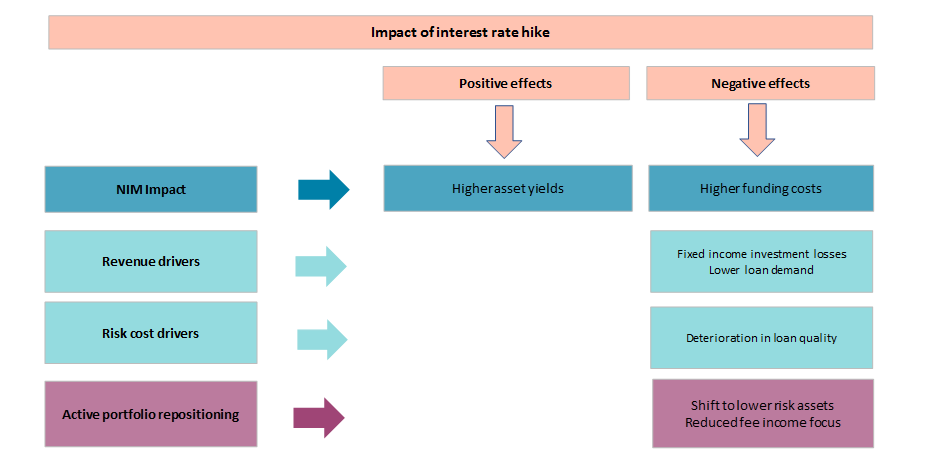 The impact of inflation on credit demand and credit quality

We think the impact of higher interest rates will be magnified in markets that are already ‘running hot’ in terms of credit extension. Such markets may be most vulnerable to a slowdown in credit growth. And existing borrowers may be more at risk of overextension as financing costs climb.

One way of determining this is to look at current levels of credit extension versus trend. Most of the emerging markets in our sample have seen credit growth run above trend (despite the headwinds of the pandemic). This makes sense given the recent environment of sustained low interest rates, plentiful liquidity and fiscal support.

Our analysis suggests European markets may be most at risk of a loan growth slowdown or asset quality hit if interest rates rise sharply. 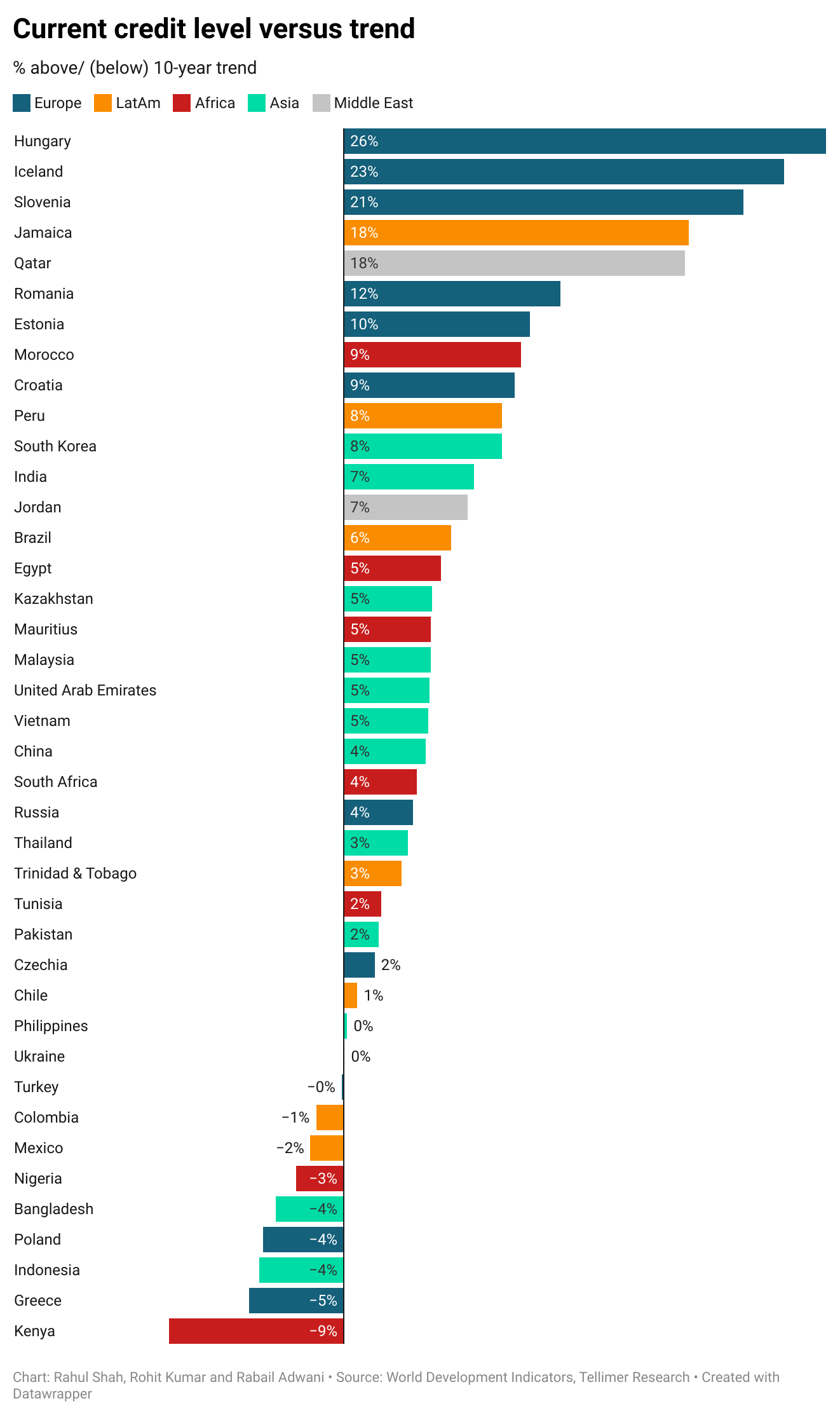 Investors’ flight to quality could put pressure on emerging market currencies. Unsurprisingly, the currencies of Russia’s southern and western neighbours have weakened most over the past month – these countries are most exposed to a combination of military risk, pressure on infrastructure from refugees, and disruption to trade and capital flows. 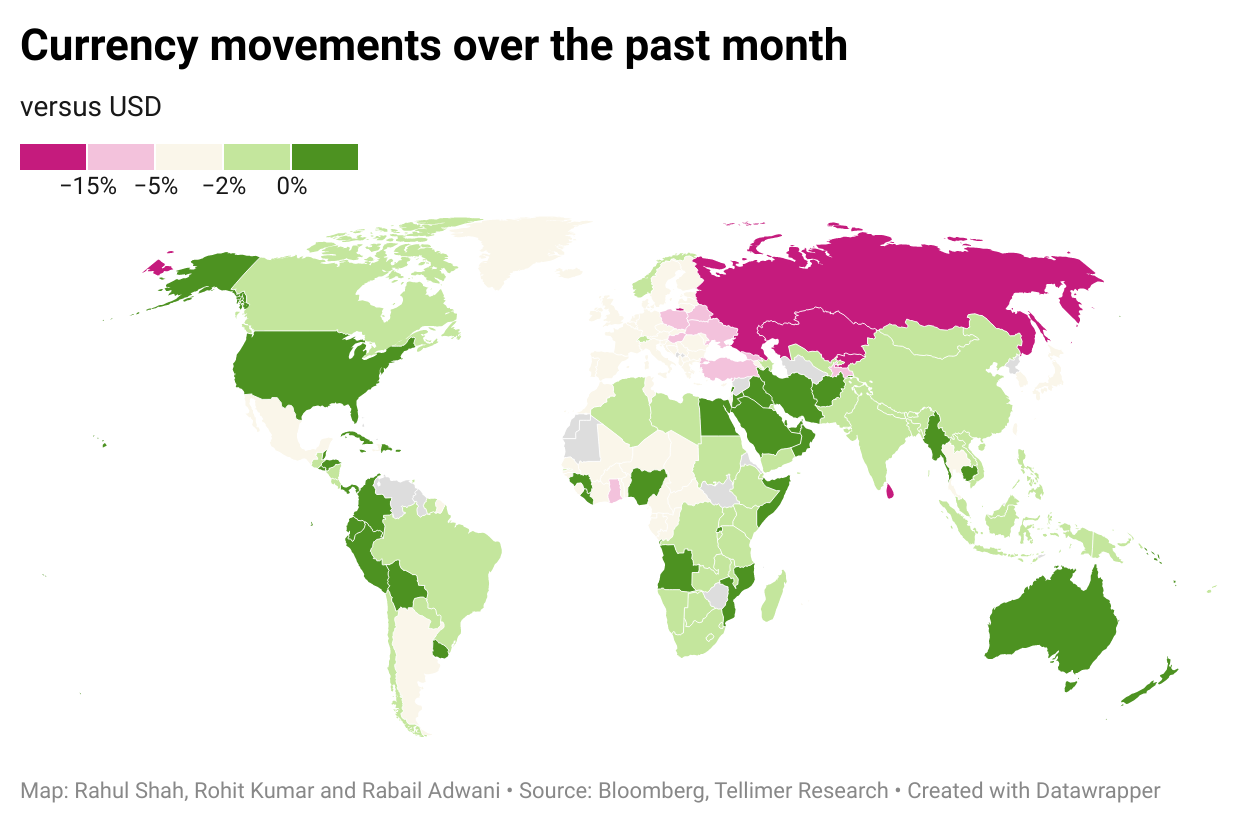 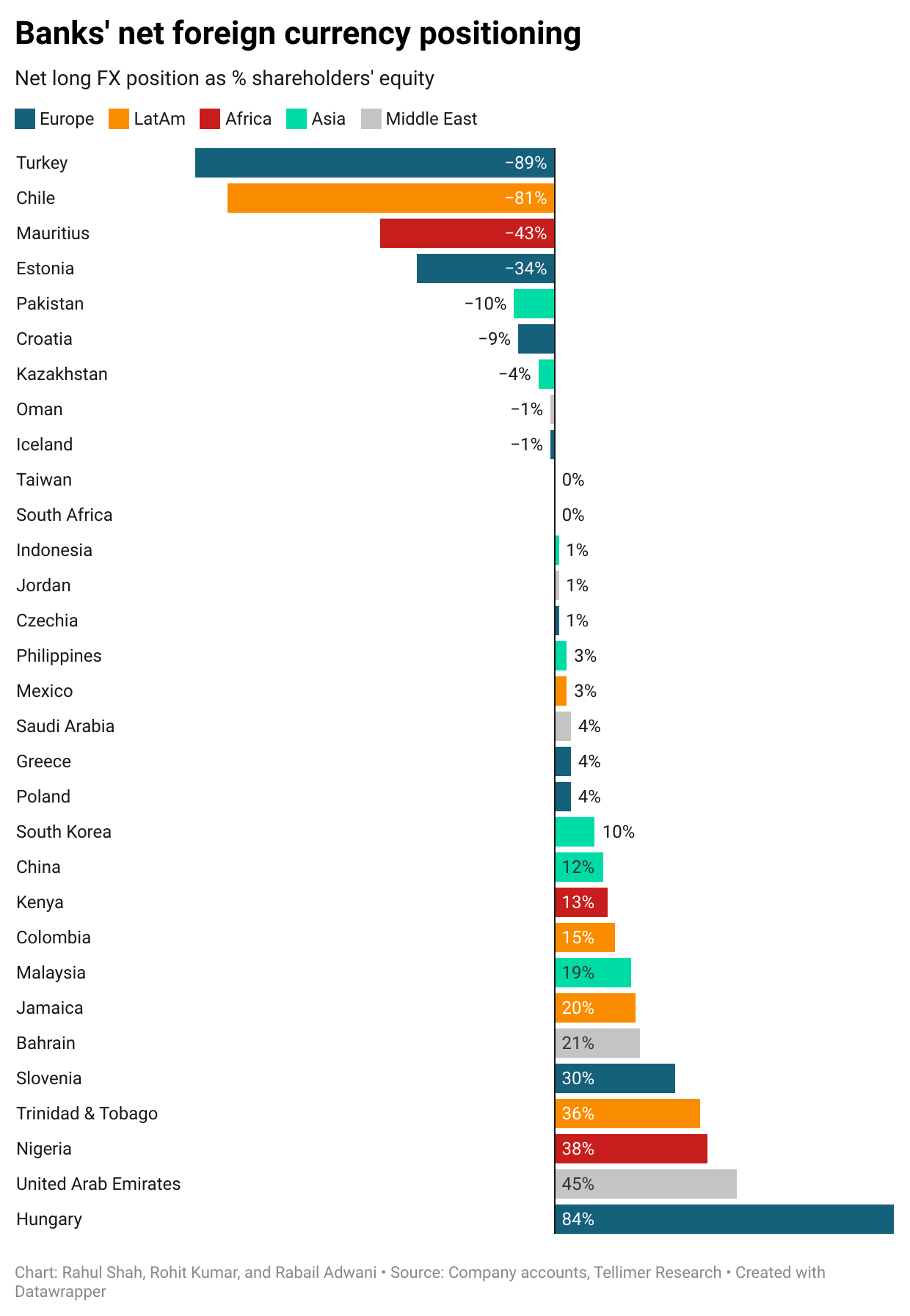 Banks with strong capital bases are better able to absorb any provisioning shock without having to take additional defensive measures (such as credit rationing) that could generate additional negative effects on financial performance. In contrast, those banks with weak capital positions could be forced to curtail dividend payouts or even turn to investors for additional funds. 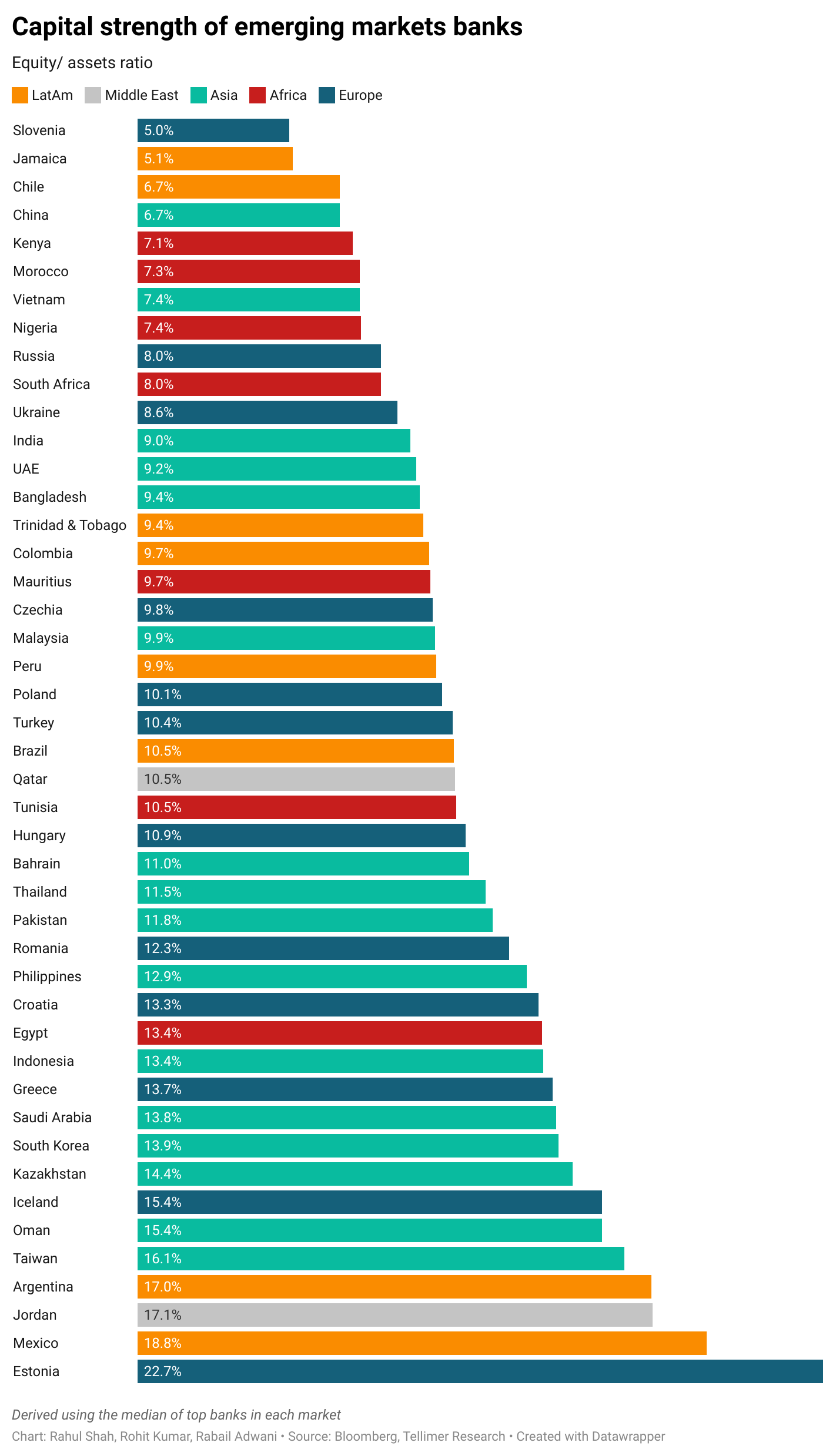 Combining four of the factors discussed above (real interest rates, margin sensitivities, credit extension versus trend and capital strength) with the extent to which interest rates could rise (as reflected in real interest rates) helps us to build an overall inflation vulnerability index for emerging market banking systems.

Banks that seem most exposed to the rising inflation tide include those in Jamaica, Iceland and Slovenia. In contrast, banks in Saudi Arabia, Mexico and the Philippines could prove better able to weather the new environment, partly due to their ability to improve their margins. 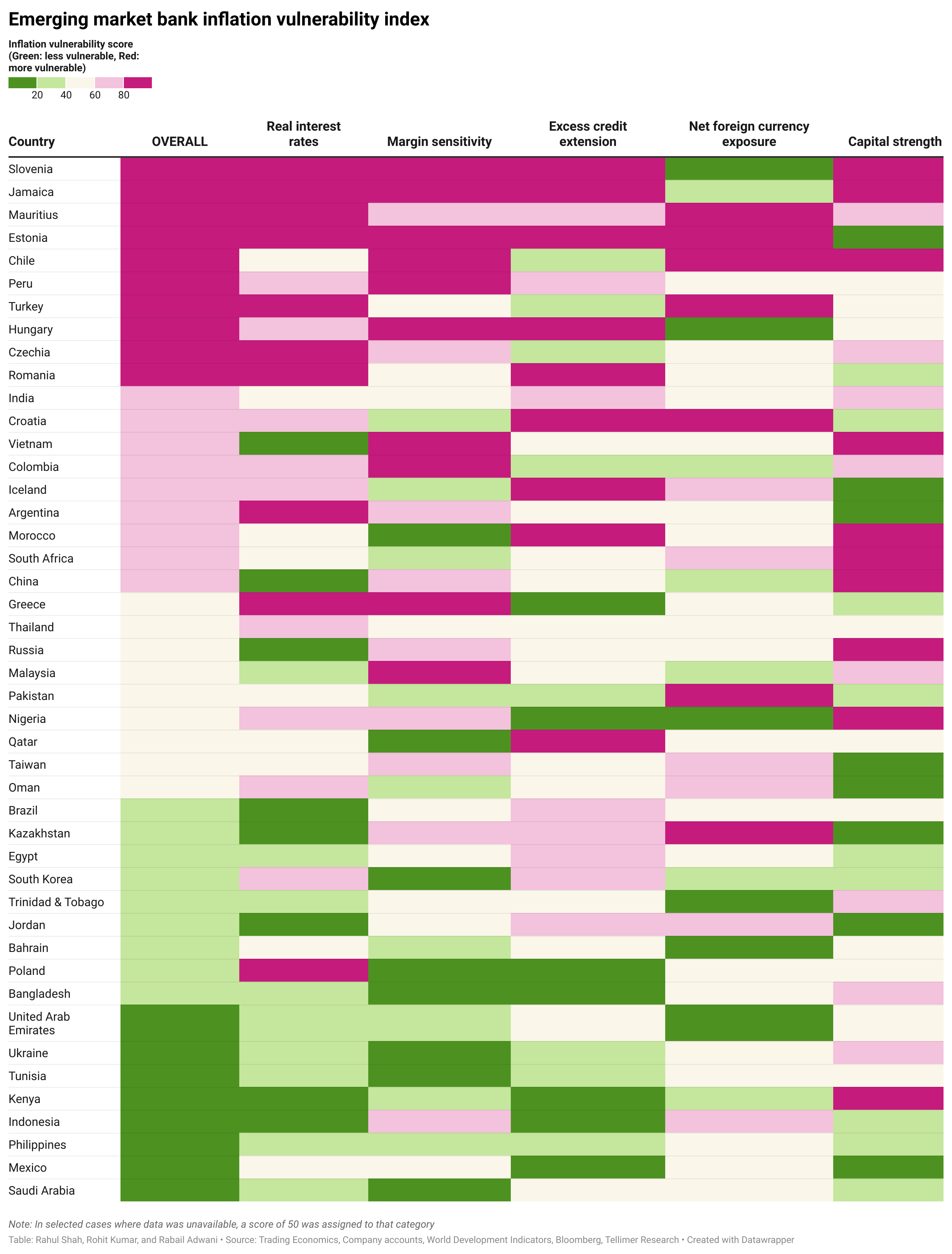 Our analysis suggests that equity investors are still not differentiating for inflation risk in their portfolios. Banks in the Philippines stand out as being resilient to inflation risk but also trading at a price/ book ratio discount to history. In contrast, banks in Estonia and India are trading at premia to history despite being more exposed to inflation risk than many of their international peers.