27 May 2022
Published by
Tellimer Research

The EM Tech firms best placed to survive the rout

This week's warning from Snap that “the macroeconomic environment has deteriorated further and faster than anticipated” shook the Tech sector's foundations.

The company expects its EBITDA this quarter to come in “below the low end” of its guidance range and the stock is down 43%. Some commentators are now fearing a Tech winter akin to the one following the dot.com collapse at the start of the century – it took over 17 years for the NASDAQ index to recover its March 2000 high, adjusting for inflation and dividends.

In this report, we look at the sustainability of consumer Tech companies n emerging markets – the so-called 'Baby Amazons' – particularly ride-hailing, food delivery and e-commerce platforms. 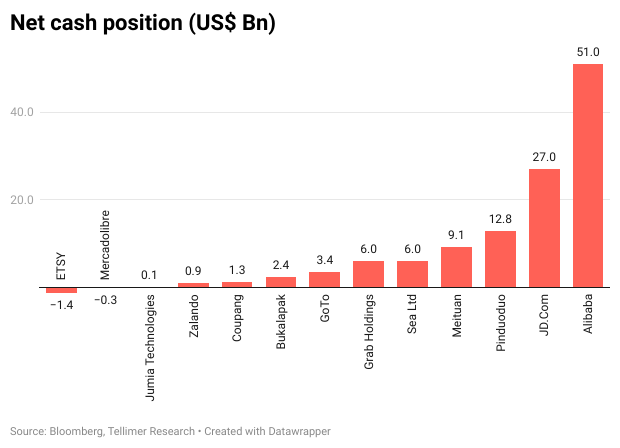 Some of these firms have quite weak net cash positions and we have stress-tested their balance sheets for the adverse market conditions, based on the following assumptions:

The following chart shows the ratio of FY 22-24 cash flow from operations (CFO) burn as a proportion of present net cash, which is a vital indicator of the vulnerability of Tech businesses to the strained market conditions. 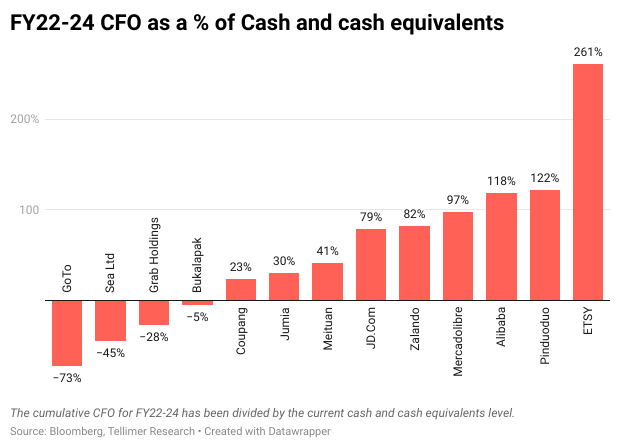 On this basis, Alibaba, Etsy and Pinduoduo are on solid ground – the companies have enough firepower to withstand adversity. Among the others, MercadoLibre is also on a sound footing, but GoTo, Sea, Grab and Bukalapak are vulnerable. 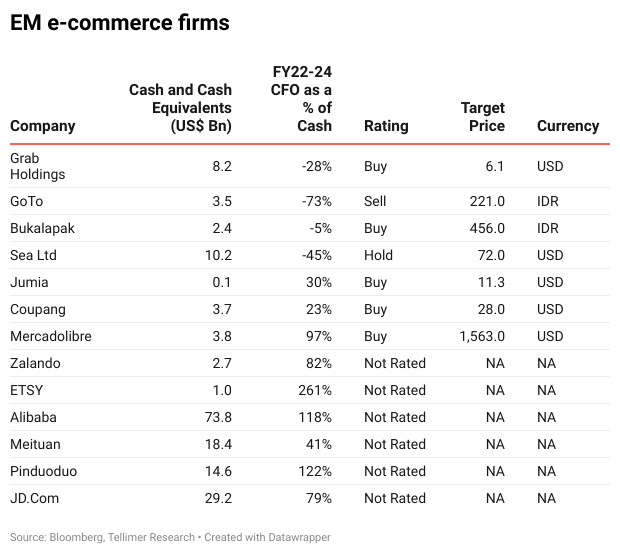 As the above table indicates, there are cases where we have a Buy recommendation on companies that are potentially vulnerable on this metric, such as Grab and Bukalapak. But our formal recommendations are based on DCF and SOTP relative to the current market price of the securities.

The main reason that the vulnerable names have a high proportion of CFO to their present cash is the scale of their opportunity. For example, Grab is expected to triple its revenue from FY 22 to FY 24. The funding of this growth would dilute its cash reserves through high CFO losses.

On the other hand, the companies that fare well on the metric are more mature than the ASEAN names. For instance, MercadoLibre has been operating in e-commerce in Latin America since the late 1990s. Similarly, Alibaba was founded in 1999 and listed in 2014. Moreover, its home market, China, is the one of the most advanced markets for e-commerce.

We are fundamentally bullish on Grab and Bukalapak, but investors need to be aware that they could be vulnerable in a Tech winter given their growth will require equity refinancing within the next three years.