The EM fintechs with the strongest operating models

We previously covered two important drivers of fintech economics, namely average revenue per user (ARPU) and customer acquisition/servicing costs. In this note, we combine these factors to calculate the contribution margins and customer payback periods for 20 listed emerging market fintechs, which helps us gauge the relative profitability of their business models.

Contribution per user (ARPU less cost of servicing per user) highlights the operating profitability of a fintech business model. Contribution per user as well as the margin (% of revenue) is highest for lending fintechs in our sample, and this could explain why payments giants, like AliPay/Paytm, have sought to diversify into lending once they have achieved scale. The contribution margin is lowest for digital banking.

Comparing the contribution per user with customer acquisition costs helps us estimate the payback period for growing the customer base. The payback period is lowest for lending fintechs and investechs, and highest for digital banking.

Applying a valuation overlay to the per user contribution of individual stocks points to 360 Digitech, Fawry and Waterdrop as attractive investments.

Digital lending is the most profitable fintech model

Contribution per user (ARPU less the annual cost of servicing) and contribution margin (as % of revenue) is highest for fintechs in the lending segment. These fintechs usually offer lower interest rates than traditional retail banks but can still generate strong margins due to their low cost operating structures, making lending the most profitable product for fintechs. This also explains why payments giants (eg Alipay, Paytm) tend to expand into lending once they have achieved sufficient scale in the payments arena. That said, lending fintechs carry credit risk and may also be more prone to stricter regulatory oversight.

In contrast digital banking businesses have the lowest contribution margin (3% and US$2 per user) as the industry is relatively at an early stage of growth; pricing could be aggressive and the activity per user might be low. However, in our view, this should improve over time. 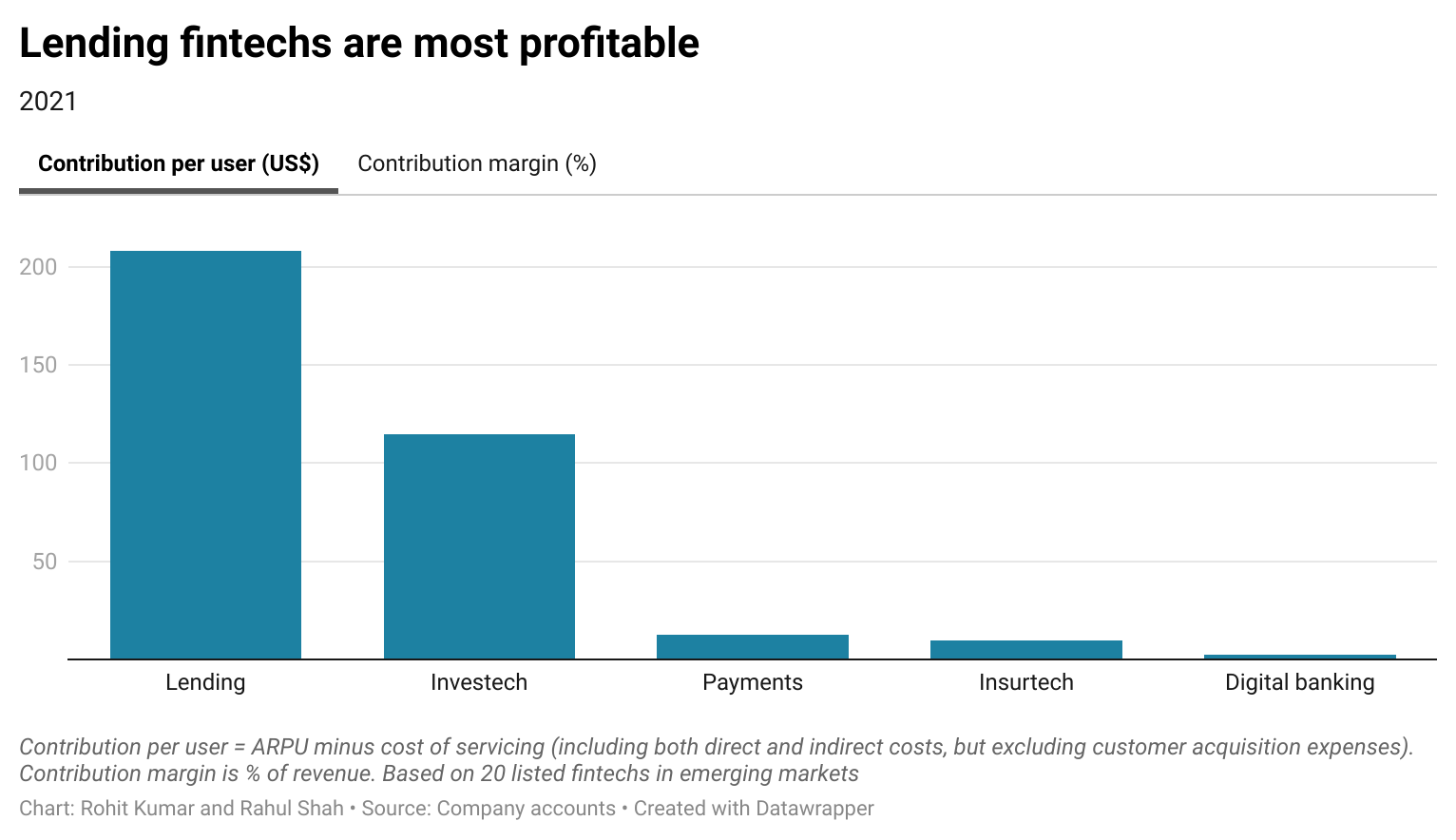 By market, Chinese fintechs are most profitable and this was also indicated by our broader study of over 100 fintechs'  profitability situation. Listed fintechs in China have an annual contribution per user of US$130 (versus a median US$25 for our sample) and a contribution margin of 43% (median 30%). In contrast, Indian fintechs are incurring contribution losses on each customer served. This, in our view, indicates the low pricing power of fintechs and intense competition, which is forcing companies to follow aggressive pricing strategies. 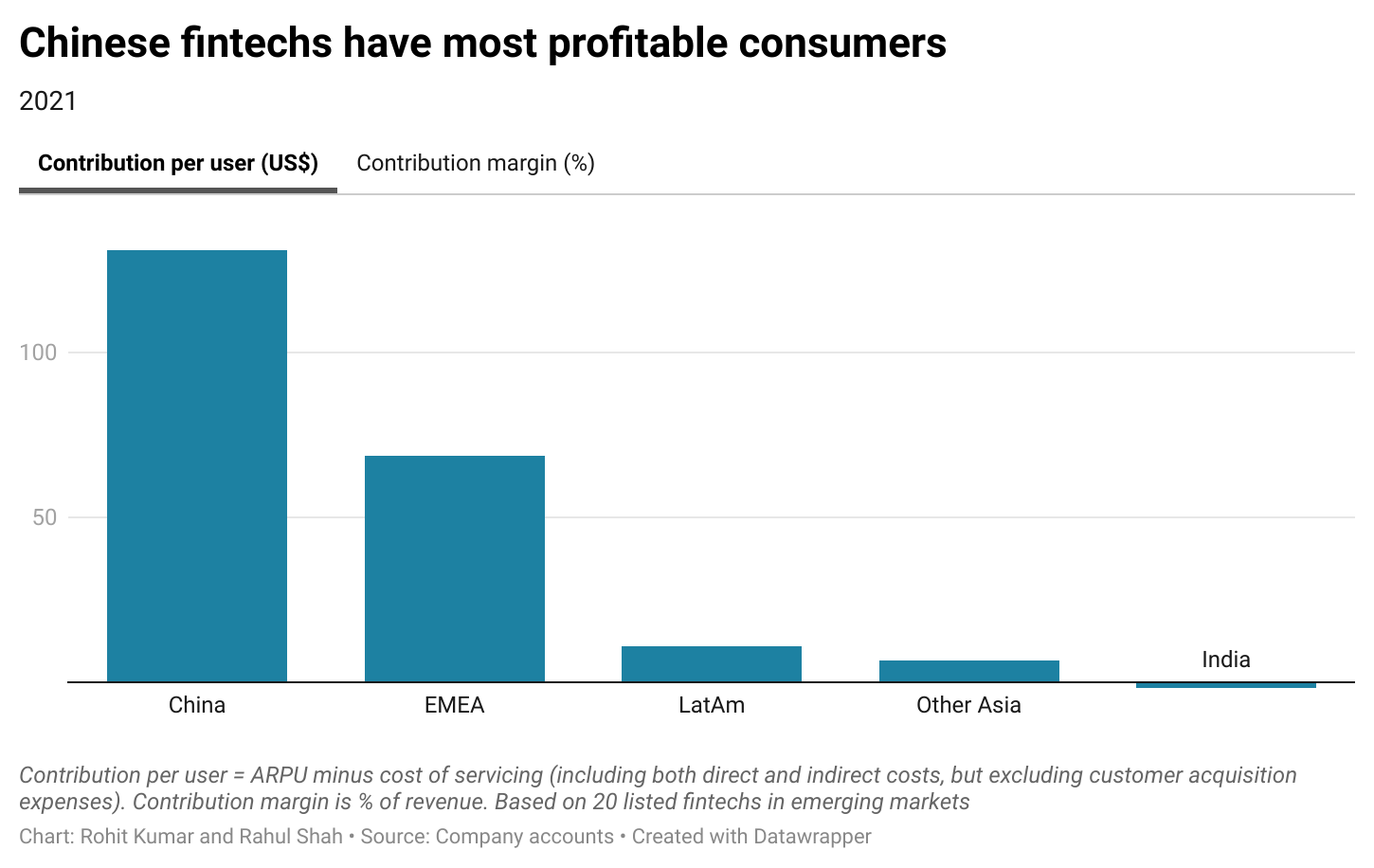 The median payback period for our sample is about three years. By product, investechs and lending fintechs have the quickest payback; these companies are able to recover the costs to acquire customers in about a year. Payments fintech tend to have highest payback period; this is because ARPUs tend to be low while significant marketing spend is required to attract new users. Again, this explains why payments fintechs tend to diversify to lending or investment products once they achieve scale.

Turning to markets, Other Asia has the quickest payback period; companies like Bank Jago (Indonesia) and Kaspi (Kazakhstan) have high contribution margin relative to their customer acquisition costs. In contrast, India and LatAm seems to spend heavily to acquire unprofitable customers. 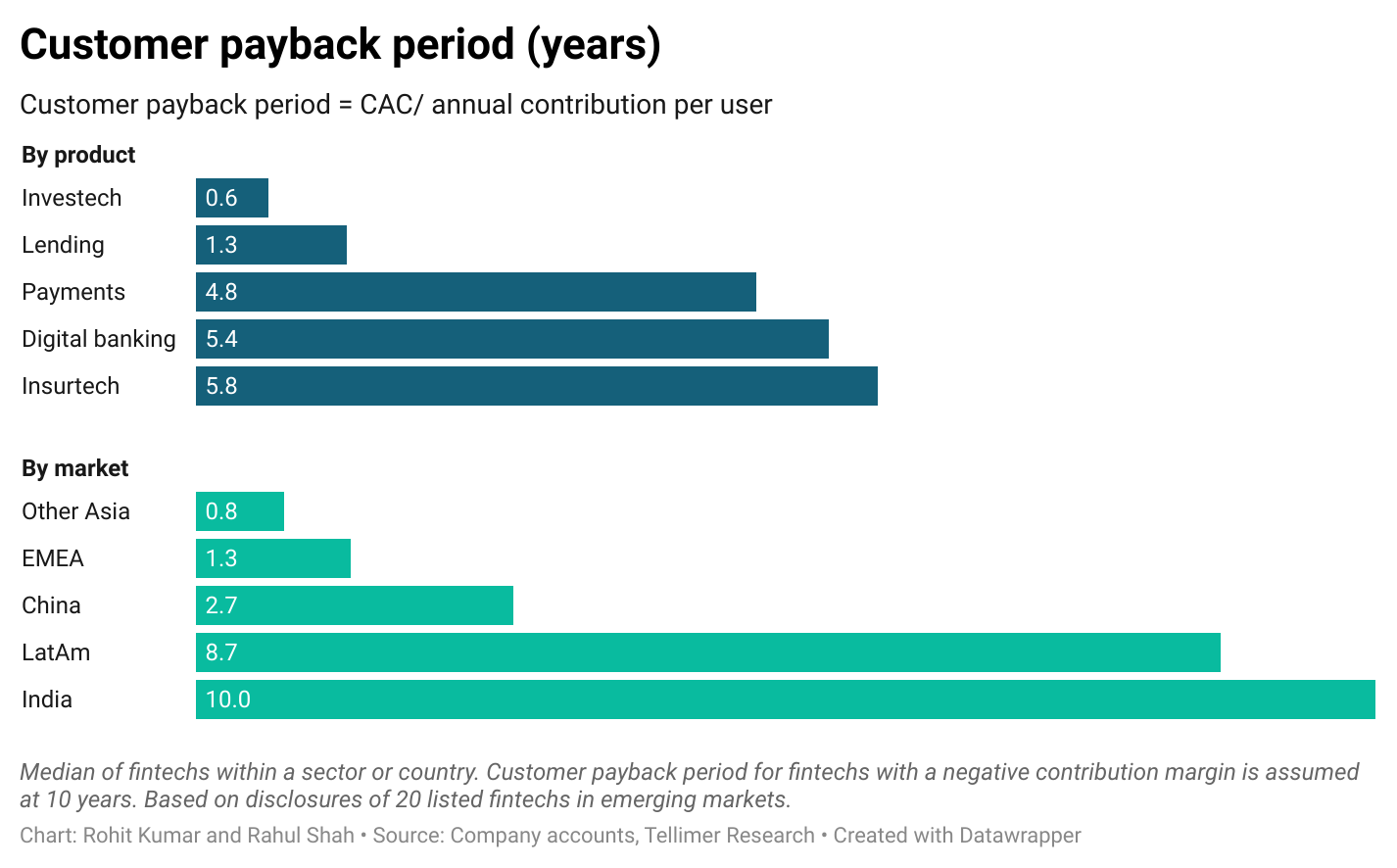 In the chart below, we plot the market-implied valuation per user against the contribution per user for our sample of 20 listed, retail-focused fintechs. In general, investors are willing to attach higher valuations per user when the user generates a higher contribution. However, 360 Digitech, Fawry and Waterdrop appear to be undervalued on this basis. Russia's TCS Group also scans well but Russia sanctions have caused a huge drop in the share price. In contrast, Futu Holdings and Bank Jago appear to be aggressively valued according to this framework. 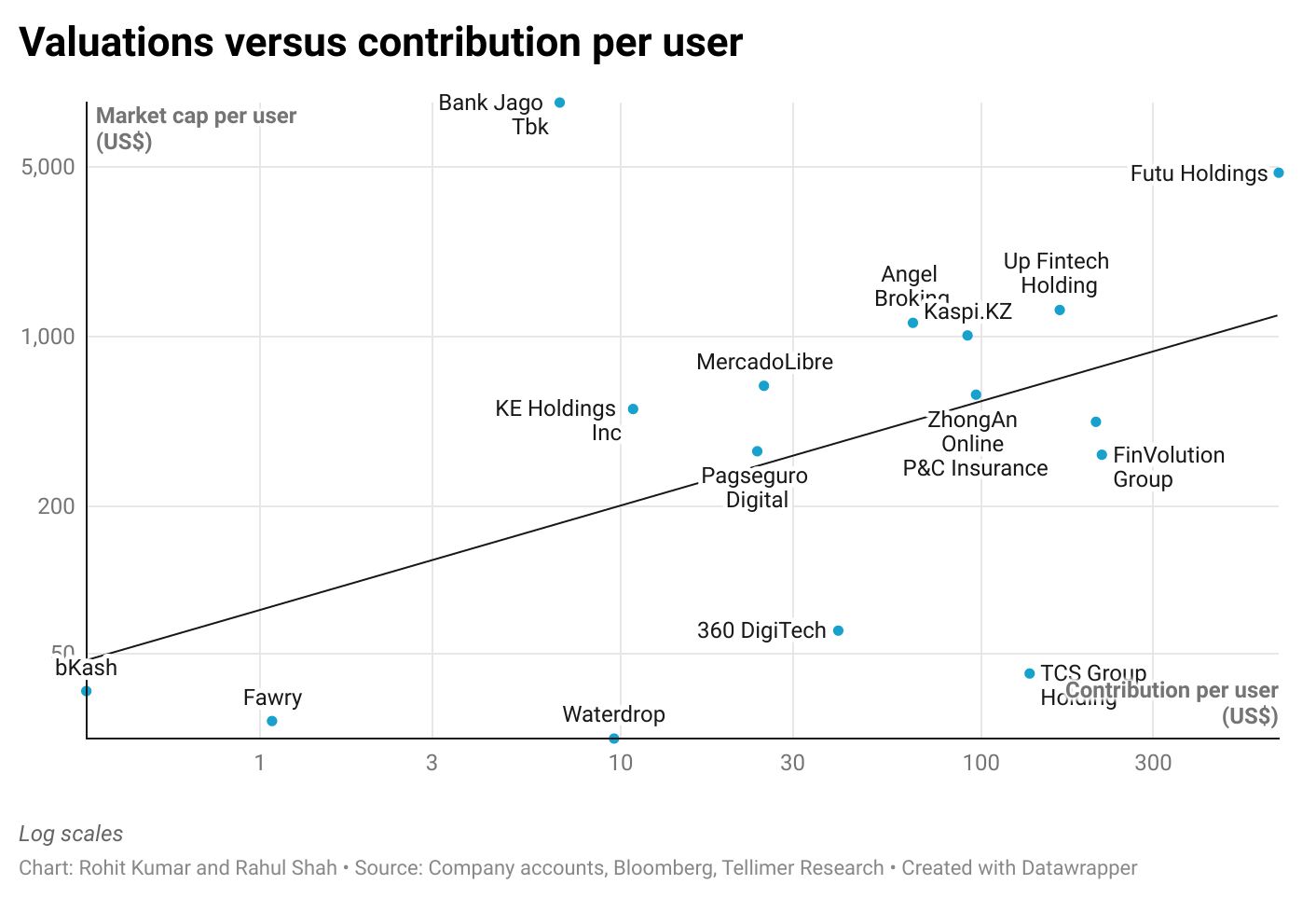