Emerging market banks have funded much of the stimulus packages that governments have unleased in their efforts to combat the covid pandemic. As a result, domestic sovereign debt now typically accounts for c17% of EM bank assets and 1.6x their regulatory tier 1 capital. These levels are at all-time highs, meaning that the sovereign-bank nexus – where the financial health of banks and countries is intertwined – is much stronger than in the past. Tighter financial conditions are now placing pressure on emerging market government finances, which in turn could put banks at risk, or at least hamper their ability to fund future credit growth.

In this note, we highlight some of the key points raised by the IMF in its recent report and identify some of the emerging market banking sectors most at risk.

The average public debt to GDP ratio in emerging markets has risen to 67% in 2021, from 52% pre-pandemic. This rapid rise reflects both the cost of support packages for households and businesses and the hit to growth from lockdowns and other restrictions on economic activity. Note that governments have also provided additional support not captured by these figures, via policy measures such as liquidity injections and loan guarantee programmes. 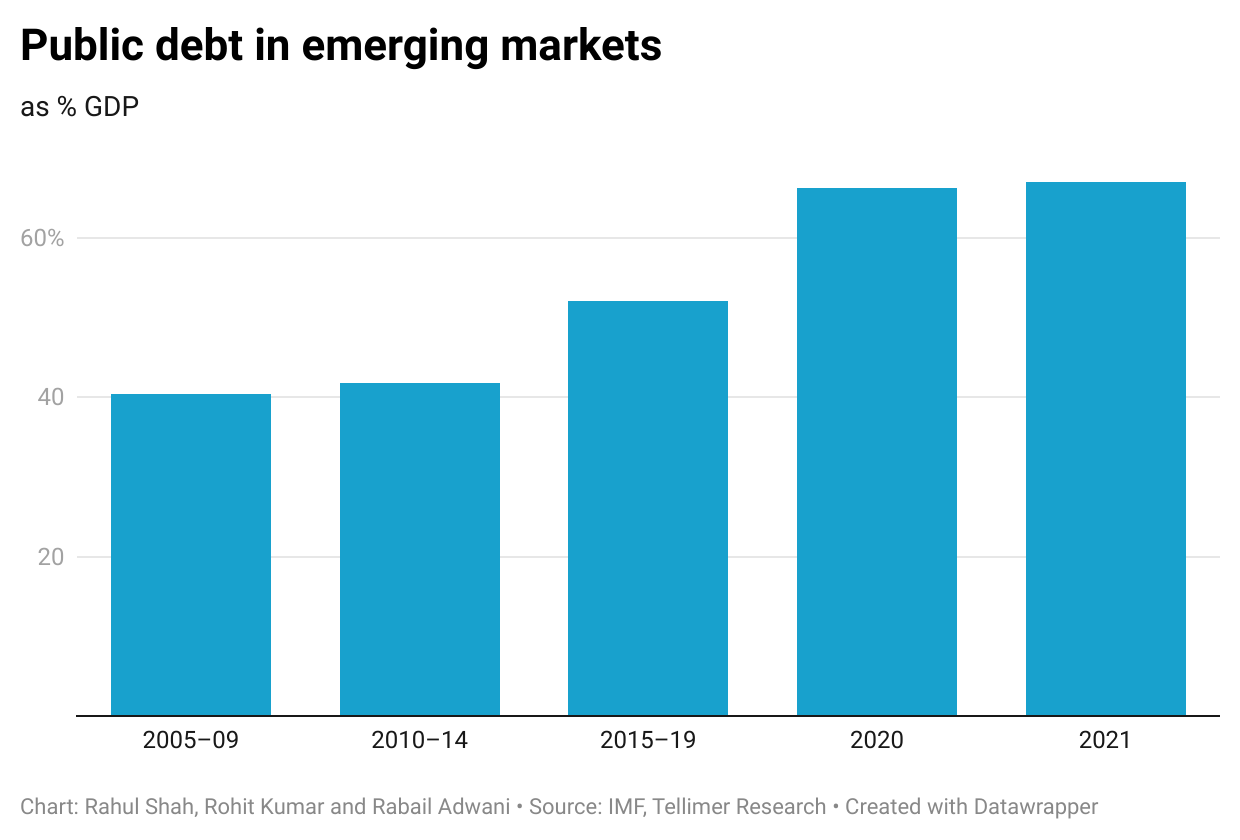 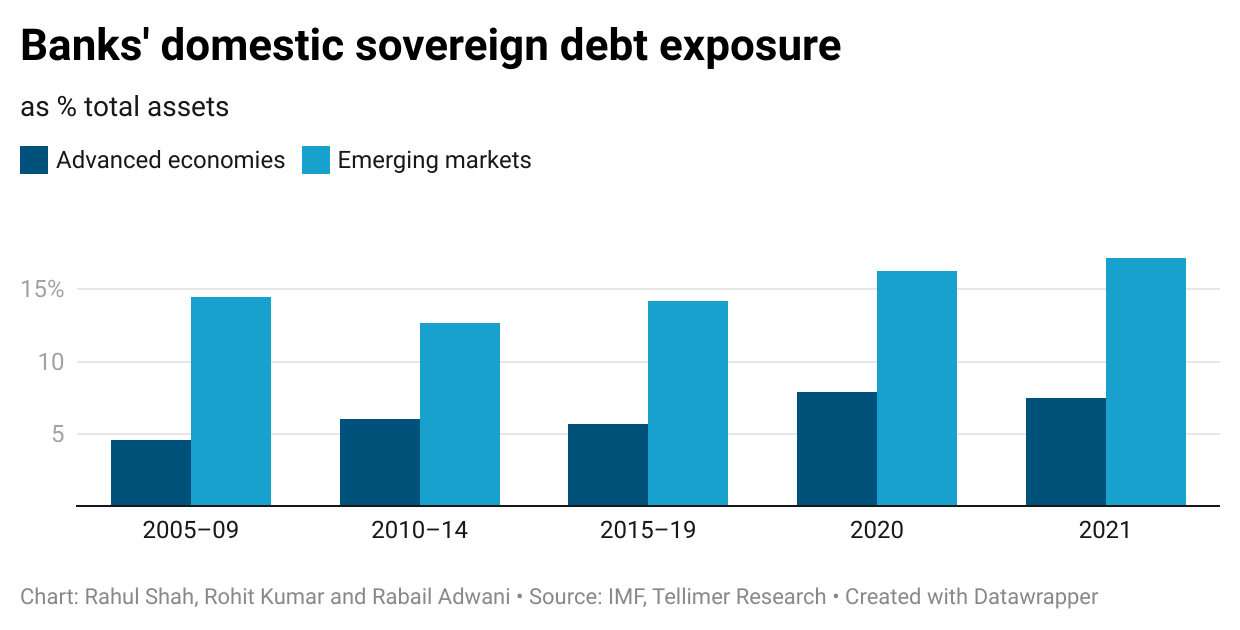 With sovereign credit rating and credit outlook downgrades predominating, the likelihood of selected EM sovereign stress events is increasing, which in turn could transfer to the banks via their sovereign debt holdings. A key risk factor that investors should consider is the public debt maturity profile – as Ghana’s recent experience shows, the refinancing environment is not currently favourable. 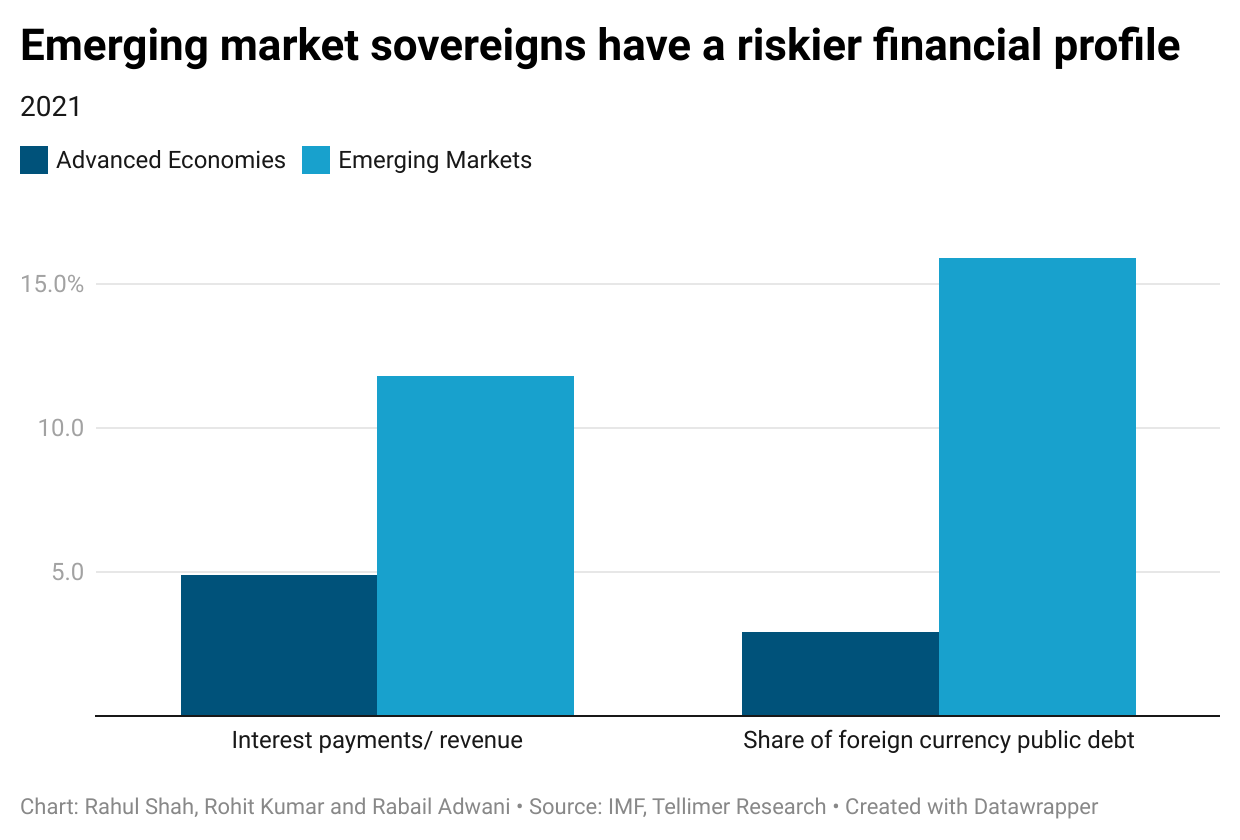 At the regional level, African banks are more exposed to sovereign debt restructuring

On average, emerging market bank holdings of local currency sovereign debt are equivalent to 1.6x their common equity capital (up from 1.3x pre-pandemic). Moreover, c75% of these sovereign debt holdings are marked-to-market on the banks’ balance sheets, meaning that any debt restructuring, or collapse in the market value of these instruments, would rapidly be reflected in the banks’ financial statements.

Historically, haircuts of c35% can be expected in a sovereign debt restructuring. A haircut of this magnitude would be sufficient to take the average African bank’s CET1 ratio below 4.5%. 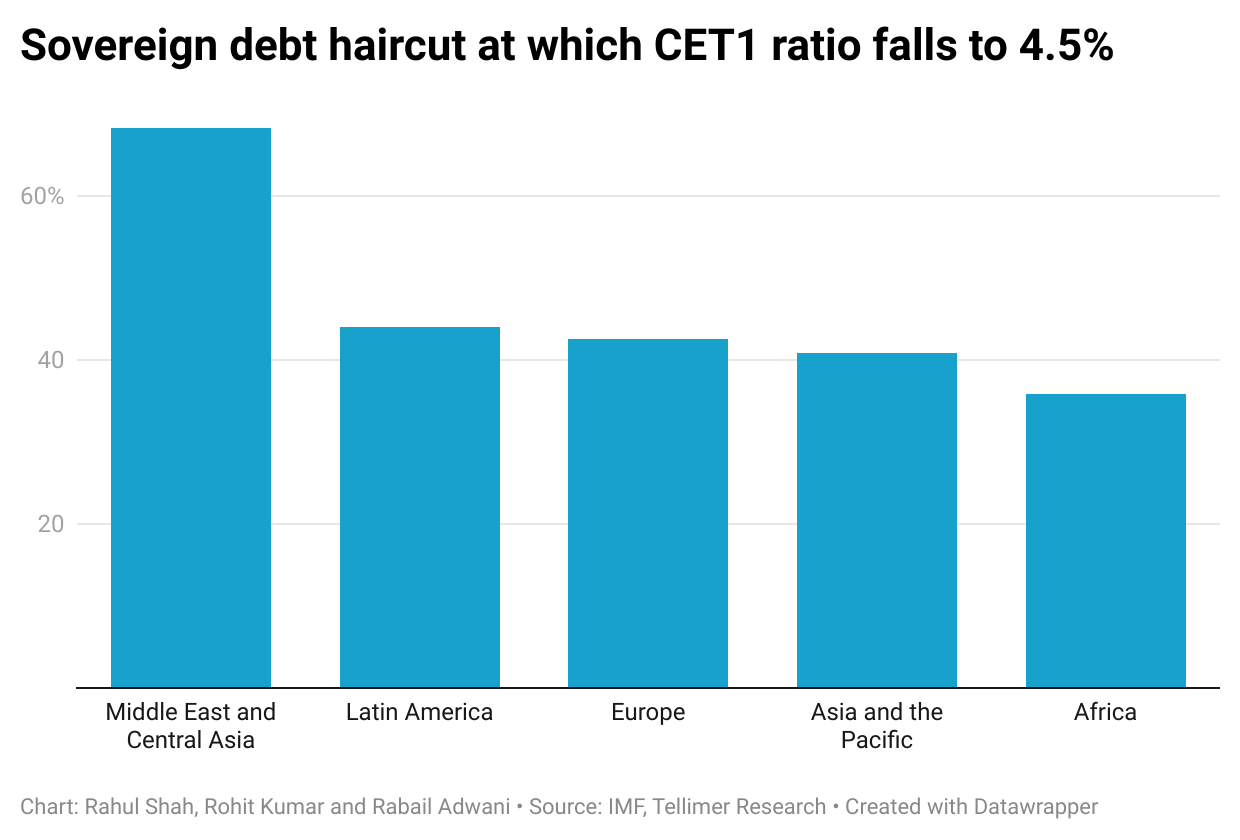 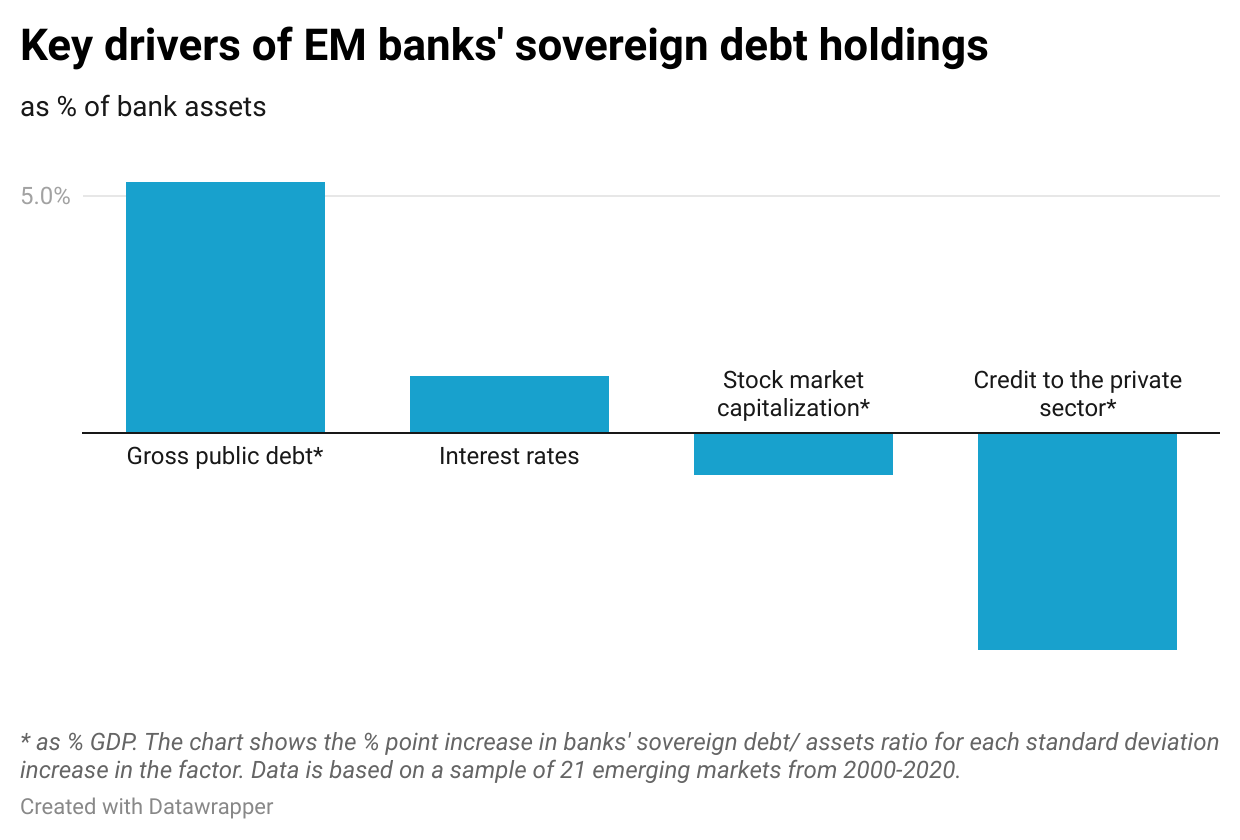 These findings tally with the country-specific results we highlight below. Banks with low loan/deposit ratios tend to be in more indebted countries with less developed financial systems.

On balance, those banking sectors in the top right quadrant are most at risk from sovereign financial stress.

The chart highlights Pakistan, Egypt and Ghana as having the biggest exposures to the most indebted sovereigns. 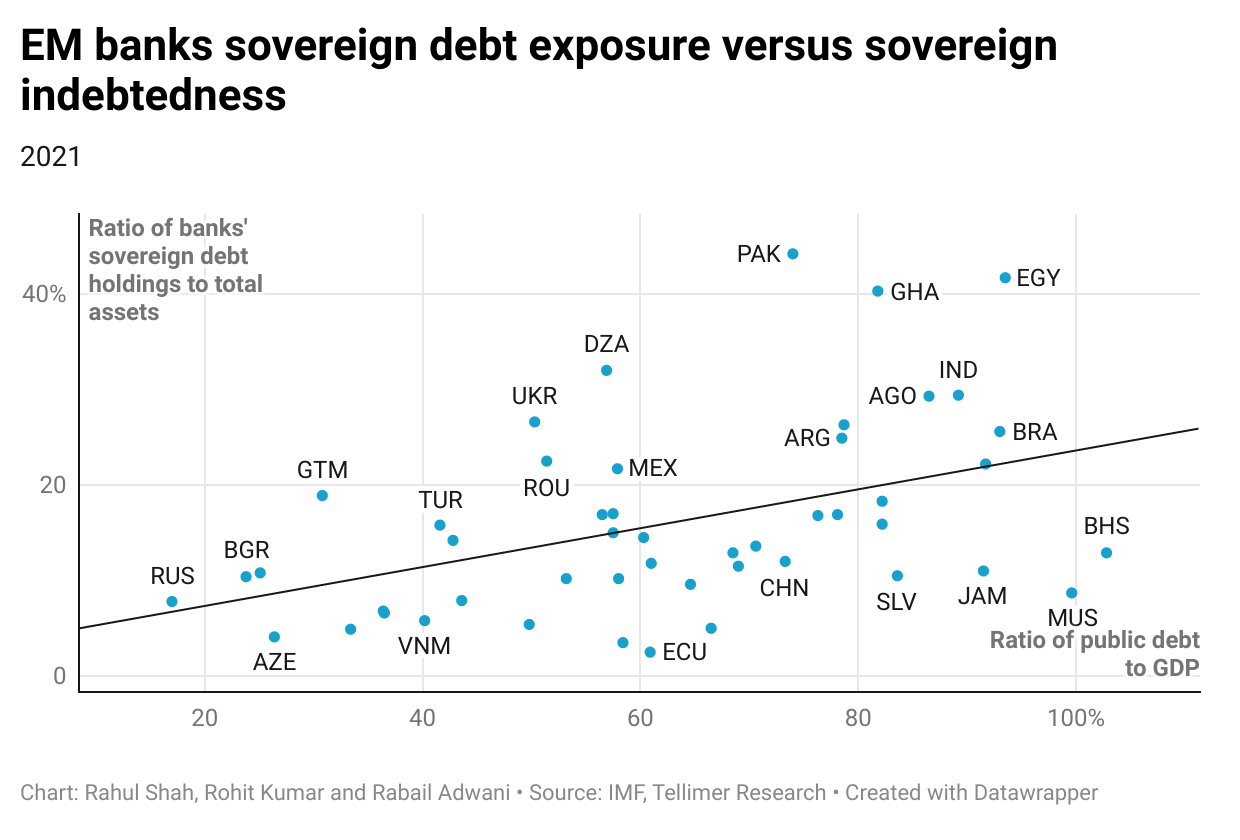 In the chart below we repeat the exercise, but this time measure the scale of bank-held sovereign debt relative to banks' tier 1 equity capital.

The data set is less comprehensive, in this case, but clearly shows Pakistan's elevated risks relative to other markets.

Ukraine’s positioning is also likely to have deteriorated, a direct consequence of Russia’s invasion of its territory. 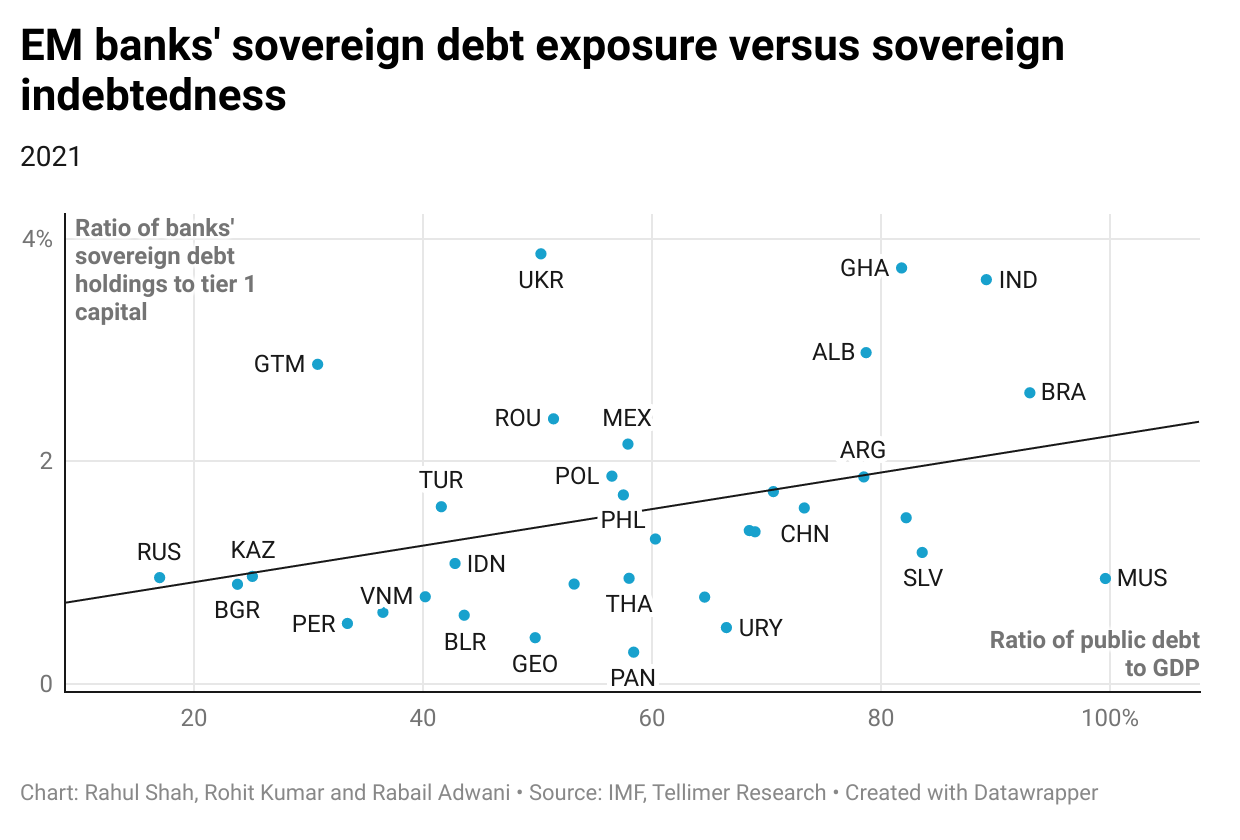 Even if investors in these banks are not directly affected by a sovereign debt restructuring event or lower market prices for these instruments, there could be other negative implications. For example, banks may seek to retain capital to reduce their sovereign debt/equity capital ratios to more manageable levels (for example, by withholding dividend distributions).

Alternatively, they may seek to limit the provisions recorded against loan assets to artificially boost their capital base. Or they could simply reduce their appetite for loan growth while they seek to bolster their capital ratios.

Accordingly, investors may seek to discount the valuations they are willing to attach to banks with high levels of exposure to indebted sovereigns.

How the ‘doom loop’ could arise

The IMF has produced this handy diagram to summarise the linkages between sovereigns, banks and the private sector and how negative events could become amplified across these economic actors. Tighter financial conditions and a weaker growth outlook are the likely catalysts that could push some economies and their banking systems into difficulty. 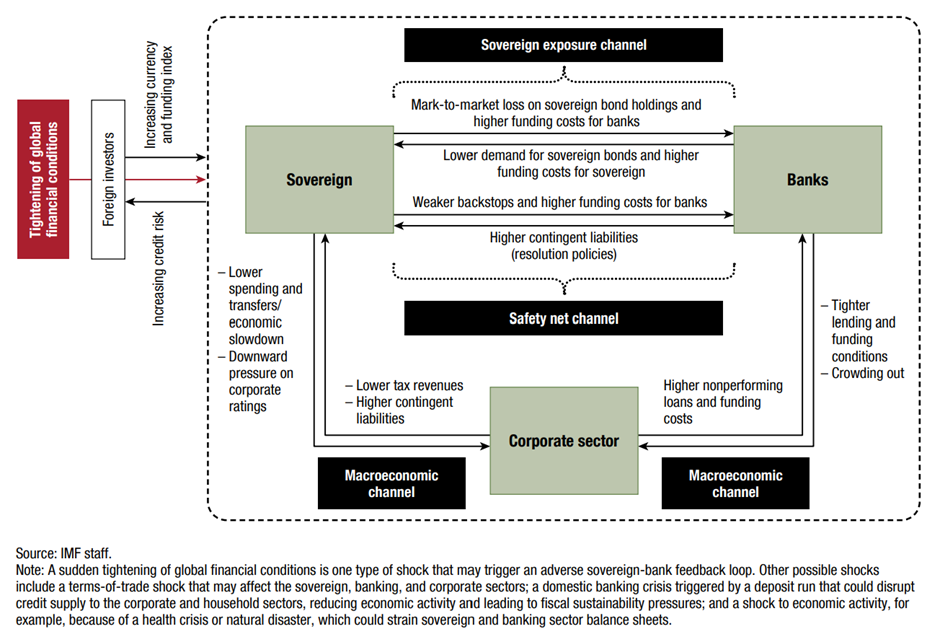 The costs of an adverse event are likely to be high

Based on historical precedent, we note that the impact of a negative shock on any of these indebted emerging markets could be substantial. For banking crises between 1971 and 2016, the non-performing loans/loans ratio peaked at close to 30% on average in emerging markets (versus half this amount in advanced economies).

The fiscal costs of subsequent financial sector restructuring averaged 10% of GDP, with liquidity support measures accounting for a further 10% of GDP.

Banking, currency and sovereign debt crises are more likely to be intertwined in emerging markets than in advanced economies, which may account for the higher resolution costs of such events in these countries.