The digital banking and tech revolution in EM

There are 4.8bn adults in emerging markets and over 4bn of them own at least one mobile phone, a massive opportunity for tech innovators and a huge risk for traditional services that fail to adapt.

Technological innovators are disrupting traditional banking in EM and FM. The number of global users of mobile money – a key component of digital banking in EM, where bank branches can be few and far between and broadband access is uneven – rose by 20% in 2018, from 723mn to 866mn.

Markets with large unbanked populations and high mobile phone penetration are best placed for further expansion, in our view. In this report, we sift the data to show which countries’ mobile money markets are best placed to see further strong growth.

We identify the three stages of the mobile money lifecycle:

Figure 1: The lifecycle of a mobile money provider

We also identify three major mobile money business models, and the factors that favour one over the other:

In most cases, telecom-led models have proven most successful.

South Asia and Sub-Saharan Africa (SSA) are at the forefront of mobile money developments. The mobile money services universe is rapidly expanding. At end-18, as per GSMA, there were 866mn registered mobile money accounts worldwide, a 20% yoy increase, with SSA having the highest number of users (46% of the global total), followed by South Asia (33%). Growth was strongest in East Asia (38% yoy) and South Asia (29% yoy) and slower in SSA (14% yoy).

Egypt, Indonesia, Pakistan and the Philippines have high growth potential. We believe mobile money has better growth prospects in countries that combine low levels of financial inclusion and high levels of mobile penetration. Among the major markets, we think Pakistan, Egypt, the Philippines and Indonesia have these characteristics – Colombia and Argentina could also show strong growth. 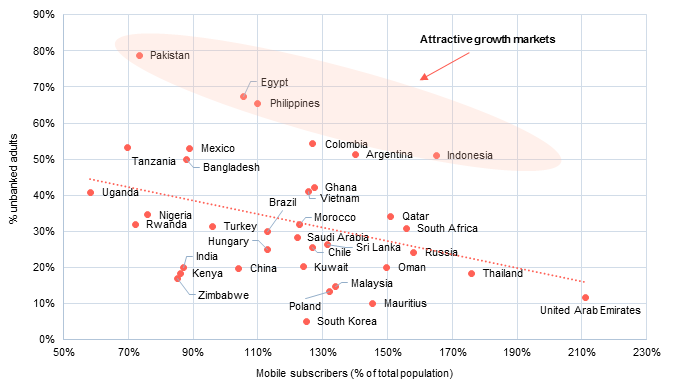 Introducing the mobile money lifecycle. We think of the mobile money industry lifecycle as having three broad phases. In the first stage, the operator’s general focus is on increasing the agent network and consumer awareness, and adoption of e-wallets is low (eg Nigeria, Vietnam). The second stage is where users shift from over-the-counter to e-wallet transactions; we typically see heavy investment from mobile money operators in promotions/ advertisements to increase use cases (eg Bangladesh, Pakistan). In the third stage, e-wallets become genuine substitutes for cash and merchant payments volumes rise significantly (eg Kenya).

We highlight three major mobile money business models: 1) operated by a bank; 2) operated by a telco/mobile network; and 3) independent fintechs. Local legislation is a key driver of which model is most appropriate in a given market. However, in general, we find mobile network operator (MNO)-led models have been more successful (eg M-Pesa in Kenya, Easypaisa in Pakistan) due to their industry expertise, large customer bases and agent networks, and relatively aggressive approach compared with that of traditional banks.

Mutually beneficial coexistence with digital banking, namely offering a wider range of financial services through digital channels, is possible. As highlighted in our recent digital banking report, data suggest that mobile money and digital banking can co-exist – they are both currently more in competition with cash-based transactions than with each other.

Potential investment vehicles to play this theme. Although there are no pure-play listed mobile money companies in our covered markets, investors can nevertheless gain exposure to this theme through investments in the equity or bonds of listed companies that have stakes in mobile money operators. Companies within our coverage with significant mobile money exposure include Safaricom, BRAC Bank, Sonatel, Cassava SmarTech and Dutch-Bangla Bank. Some of the listed companies in wider EM and FM that provide mobile money exposure include Tencent Holdings, Alibaba Group Holding, Globe Telecom, Telkom Indonesia and MTN Ghana. 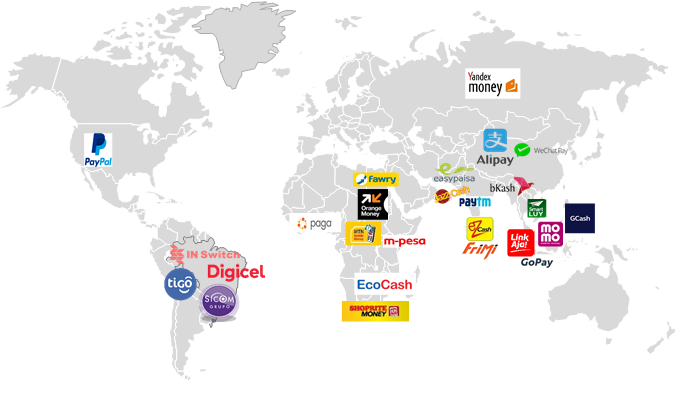