2021 Themes: The decline and fall of central bank independence

As a result, inflation has declined globally, in part due to increased monetary policy credibility from the move to independent central banks around the world during the modern financial era (although of course other factors have also played a part, such as the emergence of China, the collapse of the USSR, deflationary impacts from globalisation and increased competition). 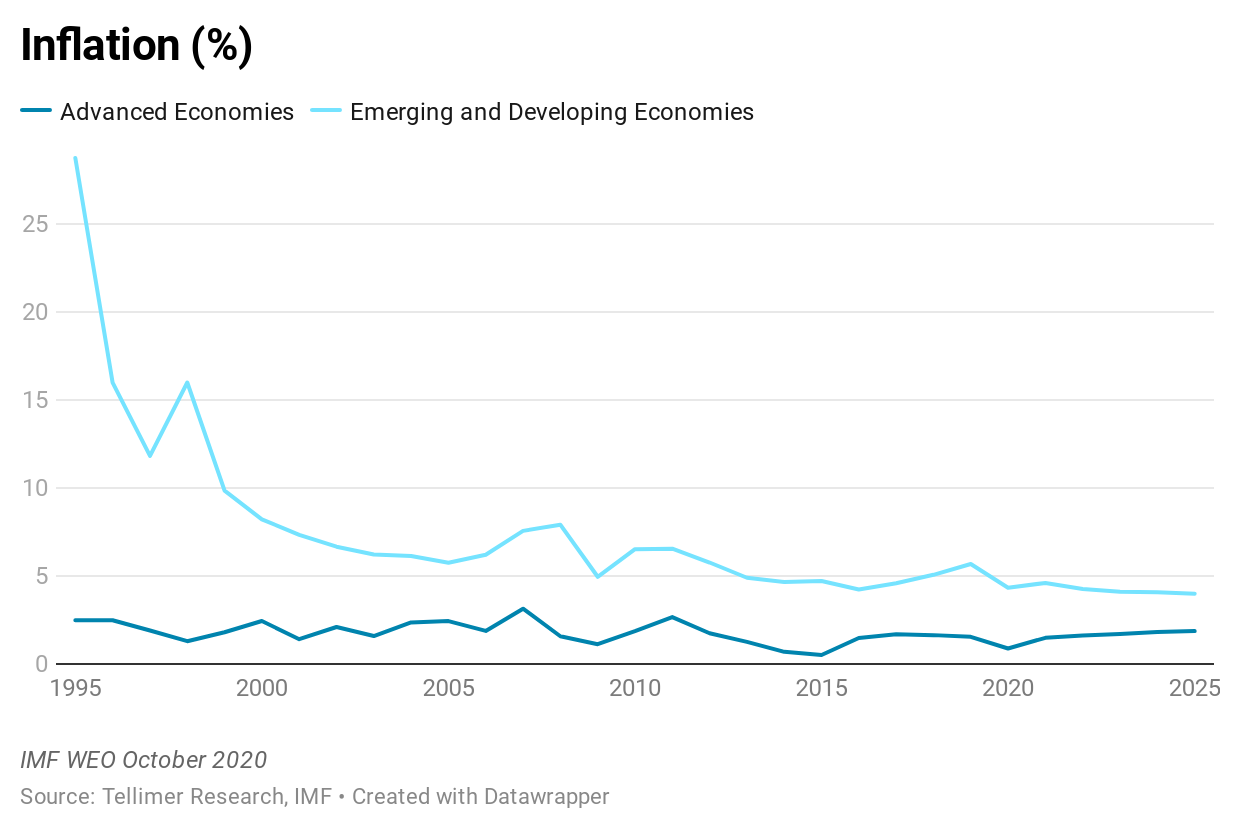 But while the case for central bank independence remains strong, and despite the global trend towards independence, criticism remained, a recurring complaint being that they haven’t done enough to support growth, especially amid the secular decline in inflation over the past 30 years.

That criticism has grown in the wake of the global financial crisis. For example, concerns over what the crisis could mean for monetary policy and central bank independence were recognised in a 2014 IMF Staff Discussion Note. Much of this recent criticism comes as central banks assumed new responsibilities after the crisis (eg financial supervision and via asset purchase programmes). This has led to calls for more public accountability and greater policy coordination across government, and concerns over fiscal dominance, as central banks stray into fiscal policy with expanded balance sheets. There have also been concerns over the distributional impact of macroprudential and unconventional monetary policies.

And, more recently, climate change may prove to be another area of contention, as some central banks explore their role in fighting climate change amid warnings from others that this risks straying further from their core mandates.

Far from their primary goal of maintaining price stability, there might now be a public misunderstanding about the role of central banks and what they can achieve. Some have questioned if independent central banks can survive.

The past few years, even before we’d heard of Covid, have witnessed a number of more direct and more vocal attacks at central banks, not least in the US, where President Trump has called for lower interest rates and sought to impose what seem to be politically motivated board appointments at the Fed. We’ve seen government interference elsewhere too. Famously, in Turkey, President Erdogan took over monetary policy decisions himself while the central bank is now on its third governor in two years. In India, the governor resigned in December 2018 after the government took more control over financial supervision. In South Africa, the government announced plans to nationalise the South African Reserve Bank in late 2017 (although it has since walked back from this). Central banks in Argentina and Nigeria have also been in the spotlight.

Indeed, a recent ECB study found that nearly half of its sample of 13 monetary authorities in the G20 (in countries accounting for 75% of global GDP) had experienced a deterioration in their de facto independence. Institutional independence was the characteristic that was most affected and this largely took the form of political pressure on monetary policy to support growth.

Of course, politicians calling for lower interest rates is not in itself a threat to central bank independence. That is what politicians do. But seeking to influence monetary policy and undermining the central bank’s authority by questioning its decisions and enforcing personnel changes is a step too far and risks damaging central bank credibility. Credibility lost can take time to recover.

We see threats to central bank independence coming from two sources, post-Covid. First, ideological threats or conflicting policy goals, as political leaders, populist or anti-market, focus on growth or other objectives rather than price stability goals. One recent example is Ukraine, where political pressures threaten the National Bank of Ukraine’s independence, having led to the resignation of the governor and wholesale changes to its board, putting the country’s IMF programme at risk. Another example is Zambia, after the president removed the governor of the Bank of Zambia. After Covid, central banks around the world, but especially those in EM, may be put under greater pressure to support growth given fiscal constraints and debt sustainability concerns.

Second, the risk of fiscal dominance, as government financing constraints lead to direct monetisation of government deficits. This increases governments' dependence on central banks. This has been seen in Indonesia, the Philippines and Suriname, for example. For instance, under recent Indonesian legislation, the central bank funds US$40bn of the country’s Covid bill. Parliament will also consider possible legal changes that could give the government more authority over the central bank, including changes to the monetary policy committee and a new monetary policy board.

In addition, over a dozen EM central banks have embarked on asset purchase programmes (QE). These programmes could be difficult to unwind and could lead to greater tension between fiscal and monetary authorities. Investors may place greater attention on exit strategies going forward. 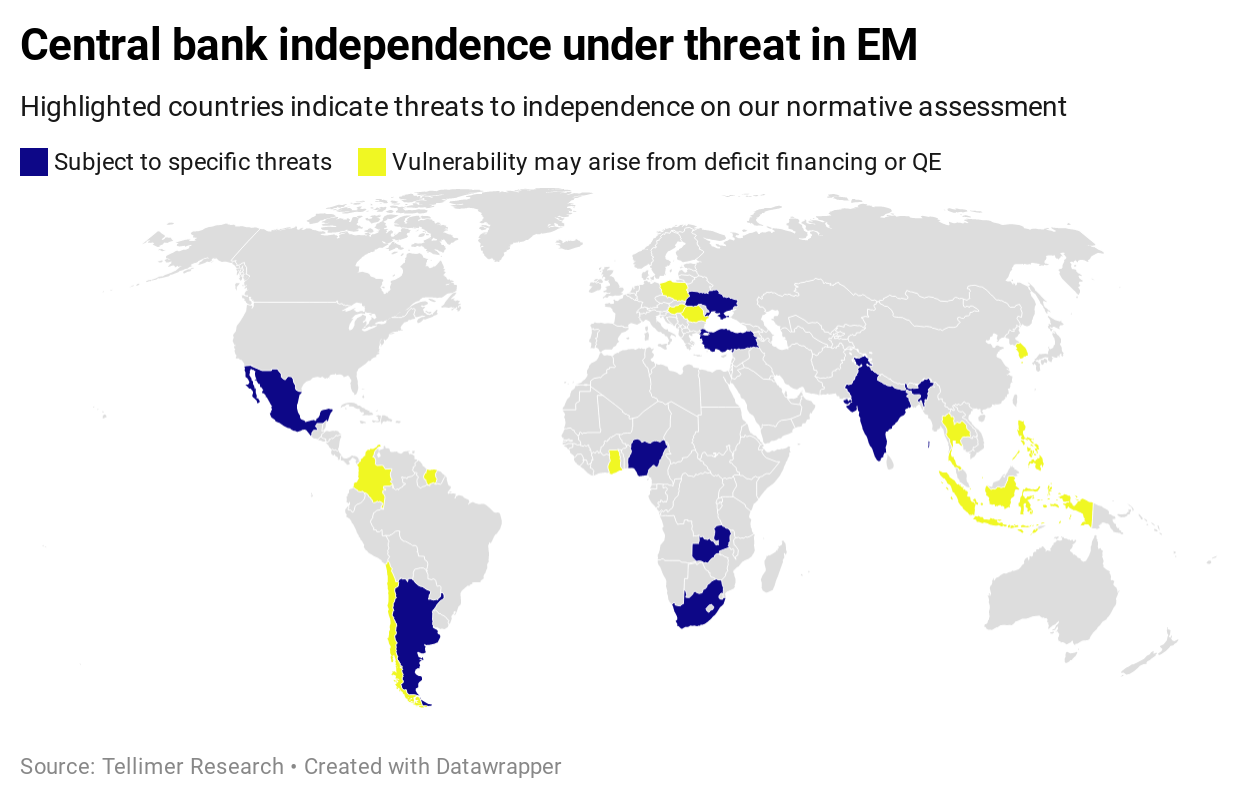 Moreover, changes to central bank operational frameworks in developed markets that might appear to chip away at their independence, or seem to change the rules of the game, may have a negative demonstration effect in EM. It tends only to be a matter of time before EM adopt policies seen in their richer country counterparts – look at the experience in developed markets with fiscal rules, debt sustainability thresholds, the shift to central bank independence and inflation targeting in developed markets in the 1990s in the first place, and more recently, QE, all of which have been subsequently adopted by EM.

But developed market institutions are generally stronger and more established, with low and stable inflation expectations more ingrained, so that they are better placed to adapt to such changes than EM. We think such threats to central bank independence in EM could be more destabilising.