Kenya's banking sector has been through three distinct phases of mergers and acquisitions, all of which were prompted by bank failures. We believe we are now in the fourth phase, driven this time around by capital regulations, pressure on profitability and banks seeking to benefit from combined synergies.

In the past decade, there has been a notable increase in consolidation activity, with more than 10 mergers and acquisitions taking place. In this report, we trace the complete history of M&A in the Kenya banking sector and outline what we see as the future drivers of further consolidation.

A nascent sector with weak regulations

Up until 1989, the Central Bank of Kenya (CBK) did not have a fully-fledged supervisory department. According to the regulator, the department operated without documented guidelines or inspection programmes, and the scope and depth of inspections relied on the initiative and limited knowledge of the individual inspector.

For this reason, banks lacked proper oversight even though the sector was growing rapidly, hence leading to the collapse of eleven banks within the period.

According to the CBK, the main reasons for the failure of institutions in 1986-1989 included:

To regularise the banking sector and create stability, the Banking Act of 1989 was passed, which included new amendments:

In the meantime, to resolve the crisis at hand, nine of the failed financial institutions were merged to form the Consolidated Bank of Kenya. 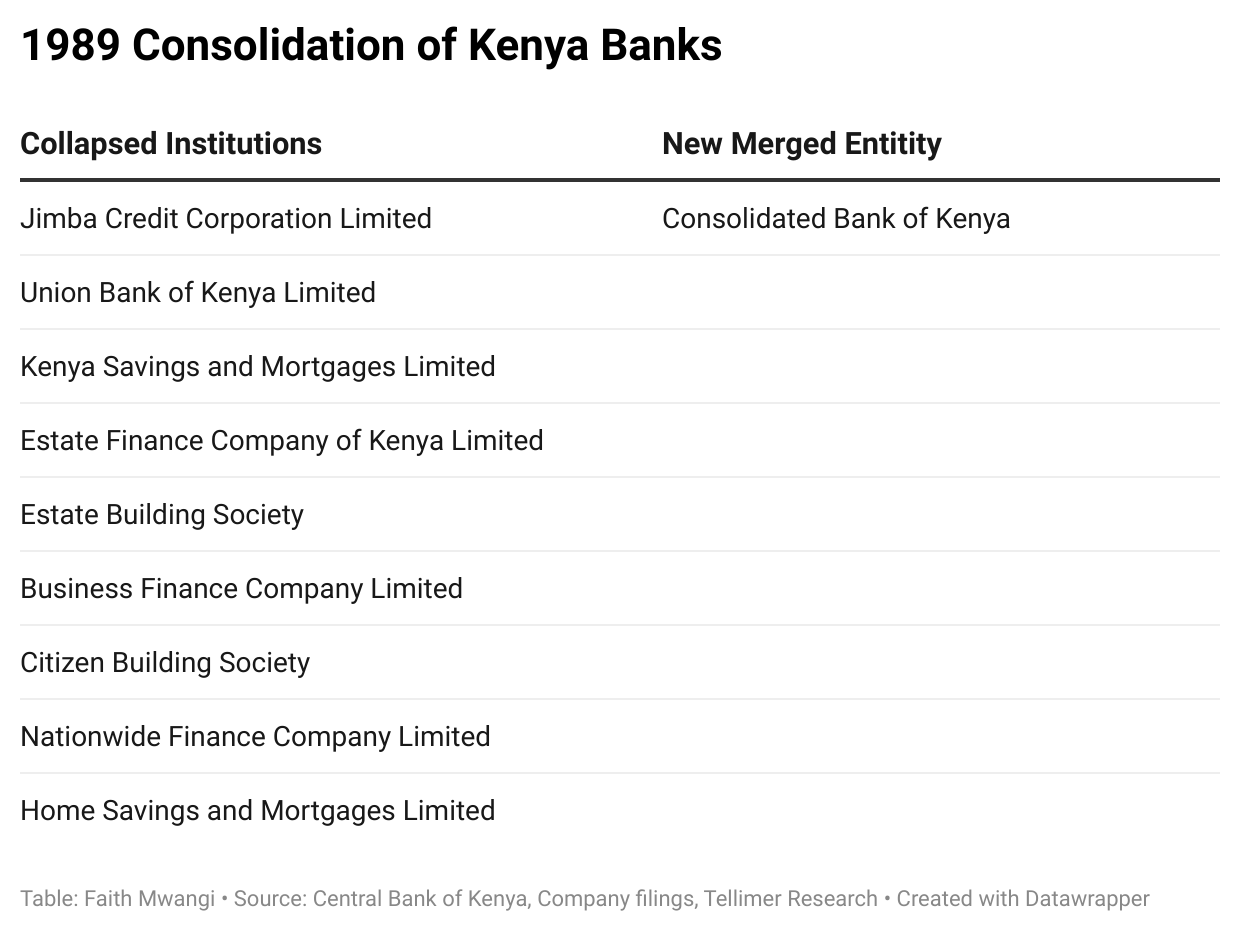 The transaction ended up achieving the main goal of salvaging government funds through ownership in the new bank. This was not the case for other financial institutions which were excluded from this merger as they did not hold government funds and were unfortunately liquidated.

Following the first wave of consolidations, the newly introduced laws were expected to prevent bank failures in Kenya. However for it to succeed, strong banking supervision and oversight was needed, which required time to build.

The period was characterised by non-compliance that led to further regulations being introduced. Banks operated outside of the 1989 regulations as supervision was not capable of adequately monitoring the sector and compliance regulations needed to be tightened further.

Between 1993 and 1994, the regulator liquidated 17 financial institutions, with much of the sector still in troubled waters. The majority of these institutions were individual/family-owned institutions that still struggled with corporate governance.

According to the central bank, the reasons for liquidating these banks were:

Another factor that drove mergers in this period was the liberalisaton of lending rates – lifting the ceiling on lending rates in 1991 set the stage for banks merging with non-bank financial institutions (NBFI).

Mostly, NBFIs were owned by banks that primarily set them up prior to 1991 when the lending rates were higher for NBFIs than banks due to a lending rate ceiling placed on bank loan yields. After liberalising interest rates and introducing more stringent laws for NBFIs, banks no longer needed to maintain these institutions, thereby driving mergers. For these mergers, parent banks were simply merging their NBFI business with their bank business.

In addition to the five mergers that happened between 1994 and 1995 (see table below), a total of 19 NBFIs also transitioned to fully-fledged banks. The transition of the 19 NBFIs to fully-fledged banks was also on the back of the removal of the cap on loan yields which erased the competitive advantage of operating an NBFI. Transitioning to banks allowed the newly formed NBFIs to be able to offer a wider range of products that they previously could not offer clients under an NBFI licence. 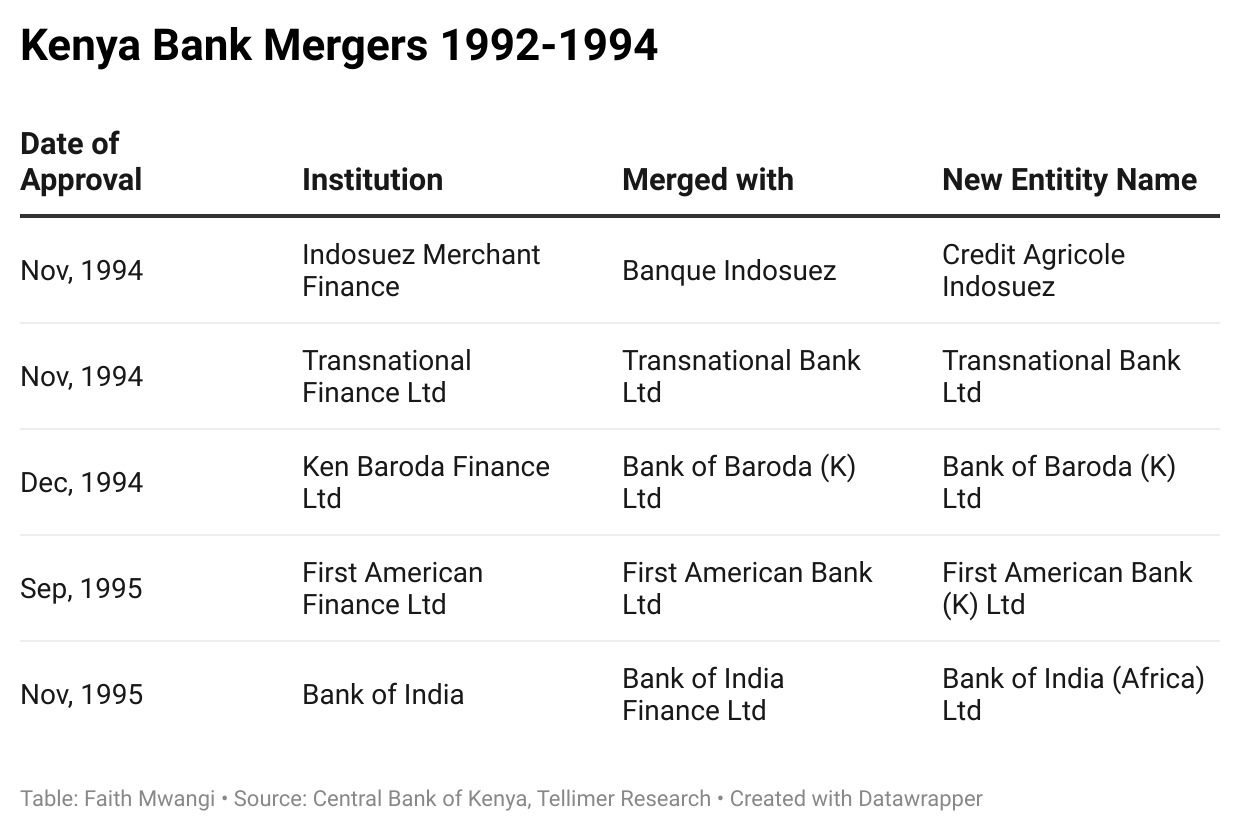 This period saw a raft of consolidations driven by the moratorium on licensing new banks and a fresh round of bank failures. In 1993, the Central Bank of Kenya placed a moratorium on new bank licences as the regulator encouraged NBFIs to convert to banks. At the end of 1996, 20 NBFIs had converted while nine others merged with their parent banks. As stated above, NBFI's that merged mostly had parent banks already operating in the country, while those that did not merge had no parent bank but wanted to take advantage of the wider product suite that a bank licence could offer to customers compared to an NBFI licence.

This brought the total number of banks in Kenya to 50 in 1996, up from 33 in 1994. The increase in number of banks at this point was positive as it meant there was better regulation in the industry as banks now were subject to stricter regulations compared to other forms of financial institutions. The moratorium was lifted in 1997, but the rules to acquire new licences were made more stringent to avoid weak players entering the market.

The period also saw five banks placed under statutory management in 1998 alone. According to the regulator, the collapse of these five banks was driven by much the same factors as in the previous two phases, which include:

At this point, the CBK had supervision teams (both on-site and off-site) that had access to banks' audited accounts and periodical audit and prudential reports. The reasons for rampant bank failures had remained much the same as in the 1980s when there were weaker regulatory measures, and hence the central bank now focused on introducing more effective risk management procedures. Previously, risk was evaluated during on-site valuations on a bank-to-bank basis with no method for consolidated risk analysis.

Regulations introduced within the period included:

The new raft of regulations resulted in 14 mergers (see table below) as banks and NBFIs tried to meet the minimum capital requirements. Similar to the 1992-94 period, most of these mergers were parent banks merging with their smaller related institutions. The goal here was to reduce both the administrative headache and the cost of capital that had been needed to maintain two institutions. 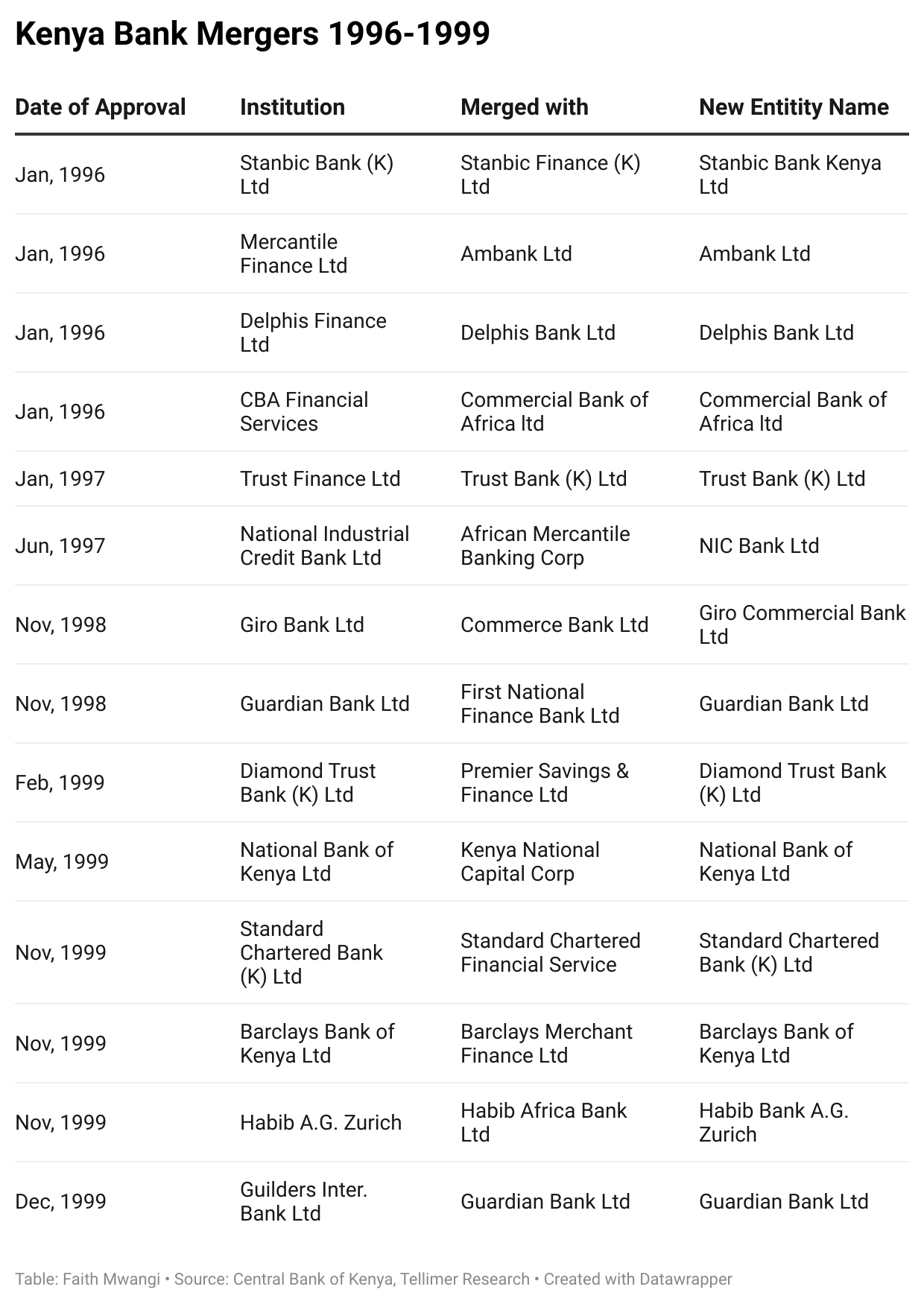 The fourth wave – bigger is better

From 2010 onwards, bank failures have been few and far between, with mergers and acquisitions tending to be driven by banks seeking synergies and meeting capital requirements rather than just NBFIs merging with banks, as was the case before.

Some of the factors that have driven the current wave of M&A activity include:

These four factors were key drivers in the following mergers and acquisitions: 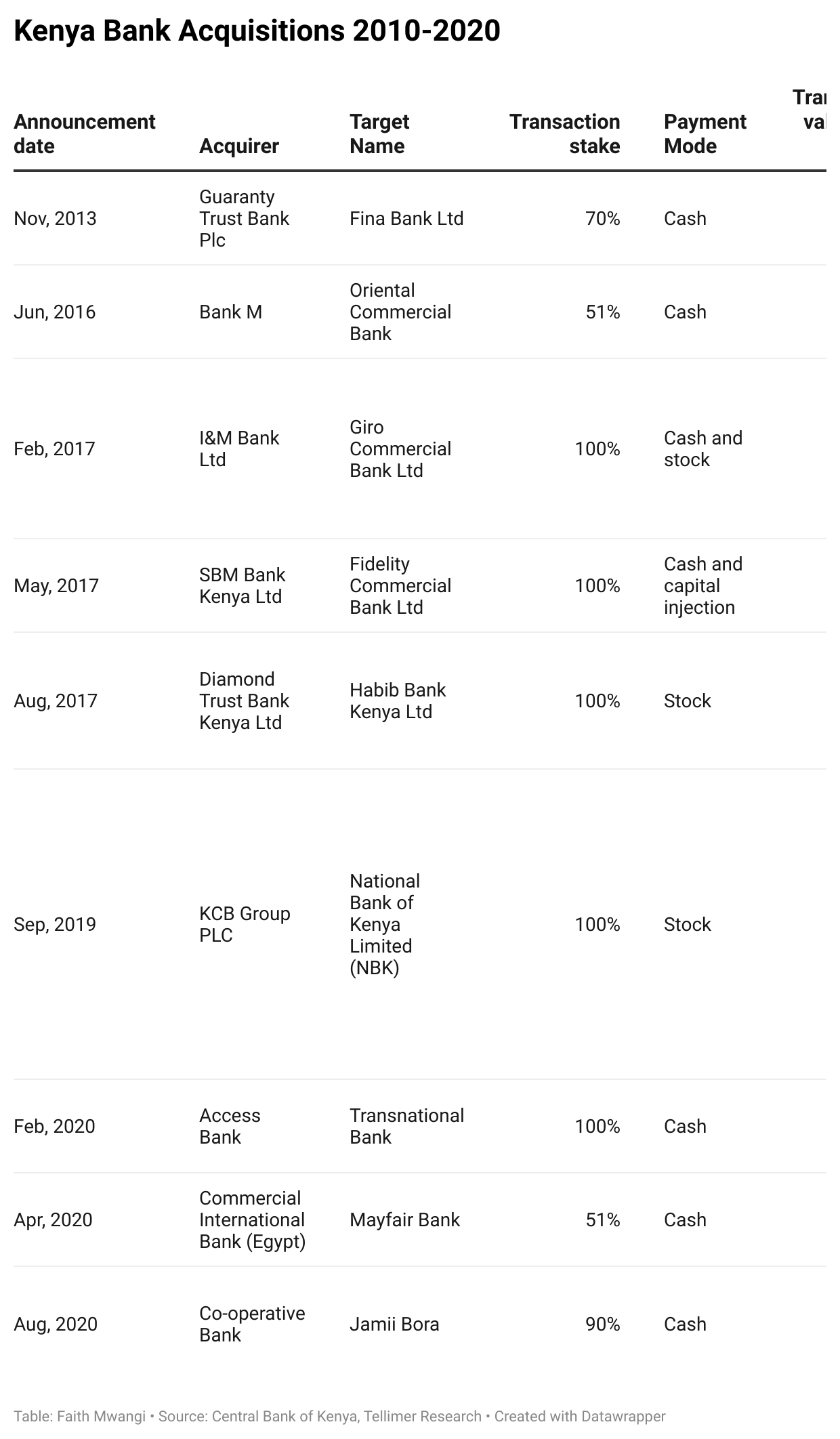 Notably, the majority of acquisitions were driven by regional banks seeking entry into the Kenyan market. With a moratorium on licences for new banks, new entrants had to go the acquisition route. The moratorium on new licences is still in place, and therefore we expect any new entrant going forward will still have to acquire an existing bank in Kenya.

Secondly, due to the declining profitability of the banking industry following the loan interest rate cap in 2016, mergers and acquisitions have been occurring at cheaper multiples. Given the continued challenges of asset quality and low capitalisation in the industry, we expect transaction multiples to remain fairly low even with the loan interest rate cap having been lifted.

In the table below, we document mergers that have occurred in the past decade. The mergers have mainly been driven by the need to increase the capital base and taking advantage of synergies presented by banks operating in similar market segments. 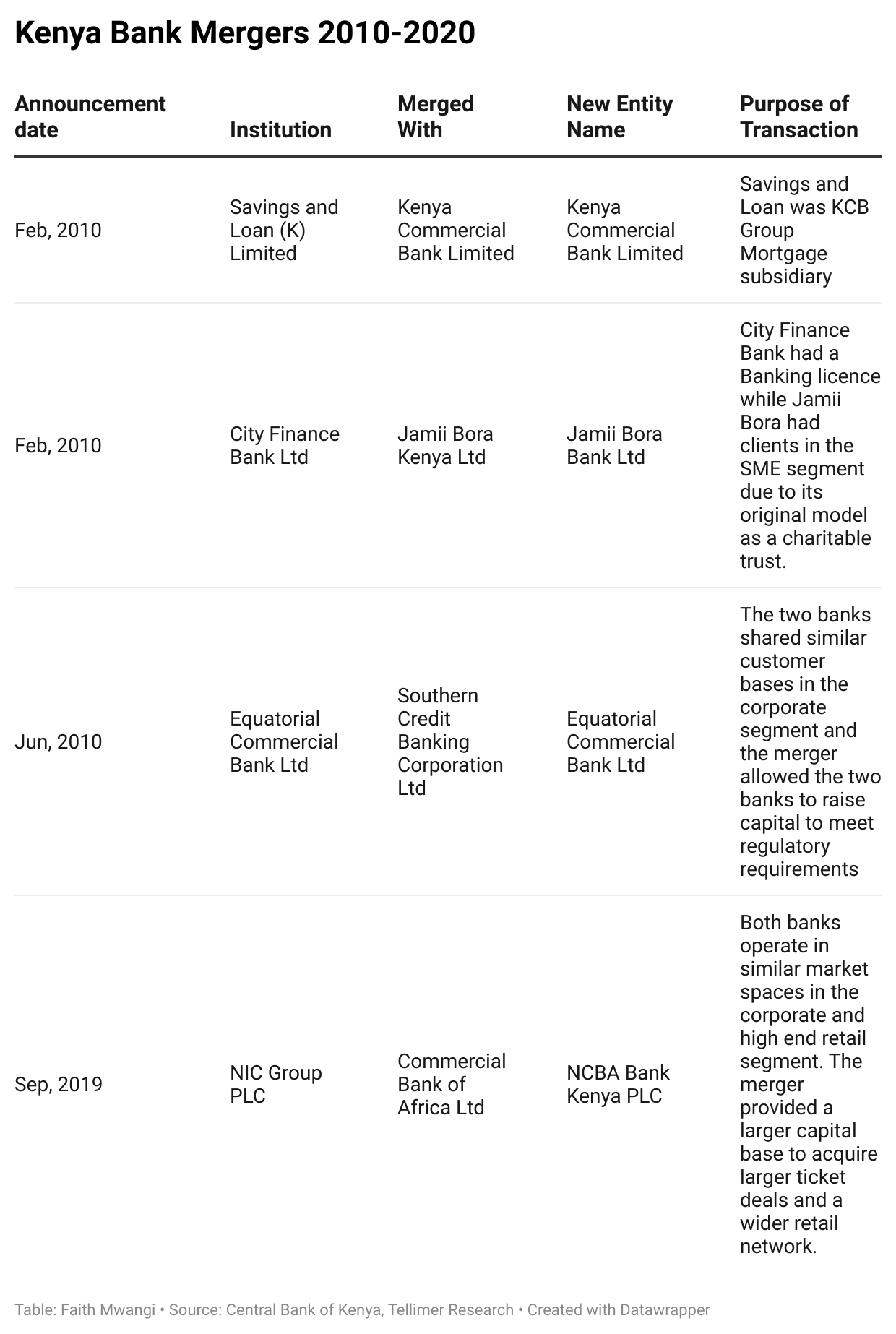 Unlike in the 80s and 90s, the M&A activity in this phase that arose from bank failures was characterised by the adoption of partial assets from the collapsed banks, as shown in the table below.

In these deals, instead of the acquirers fully acquiring the failed banks, they were given the option of acquiring partial assets from the bank undergoing liquidation.

According to the Central Bank of Kenya, the single most critical impediment to mergers in Kenya is the inability of individual institutions to get to the negotiating table and integrate their diverse business philosophies and corporate cultures.

M&A is made particularly difficult by the ownership structures of banks in Kenya, with shareholdings mainly being family or community based and, in most cases, not keen on relinquishing control of their institutions.

Why this fourth wave of M&A is likely to continue

Despite the impediments described by the CBK, we expect the current phase of mergers and acquisitions to continue due to:

These factors mean a reduction in the number of banks through further mergers and acquisitions appears inevitable.