The IMF Article IV was concluded in early May. The key message was a warning over the “perilous state” of the Bahamas’ public finances, unusually strong language from the Fund in our view, amid double-digit deficits and high public debt. Since then, there has been some improvement in the fiscal position and we saw the now not-so-new government’s budget as at least a recognition of the problem and that it is trying to do something about it. But it is early days and challenges remain.

There has been some good news, with the economy seeing a strong tourism-led recovery. Stayover visitors (and it’s those that matter in terms of spending power rather than cruise visitors) are up 82% in the first half of the year, compared with the same period last year, according to official data, although still only at c70% of pre-pandemic levels. The construction sector is also stronger. As a result, the IMF has left its real GDP growth forecast of 8% for this year in the Article IV unchanged in the WEO as it had already factored in a strong tourism recovery. Growth is, however, expected to slow to 4% in 2023 and trend growth is still low (1.5%).

There are also inflation pressures, although the real surprise for a country that imports everything and is pegged to the dollar is why inflation is still so low (6.2% yoy in August). There may be three reasons for this – measurement issues, price controls and electricity tariffs.

Meanwhile, the boost in tourism revenues does not translate into huge current account gains because of the high tourist-related import content, while import prices are now going up too, hence, tempering the net balance of payments impact. The current account deficit is expected to narrow from 23% of GDP in 2021 to 18% in 2022, according to the WEO. Still, official reserves have increased this year, up 33% ytd, to stand at US$3.3bn in August (central bank data), a historically high level. They are expected to see a decline over the medium term, although they remain satisfactory on standard reserve adequacy metrics.

But it is the wide fiscal deficit and high government debt that are the key policy challenges, as we’ve noted before. To that end, recent fiscal performance may offer some encouragement.

Buoyant fiscal revenues helped overperformance on the budget in the financial year just ended. The overall deficit fell by half in local currency terms in FY 21/22 (which ended in June), compared with the previous financial year (FY 20/21), according to official data (the official figures are now captured in the WEO). Revenues rose 37% – and, within that, value-added tax revenue rose 54% – while spending growth was contained at below 2%. As a result, the fiscal deficit fell to 5.7% of GDP in FY 21/22 (compared with the budget estimate of 6%) from 13.6% in FY 20/21, based on the WEO. However, we don’t have any data on fiscal performance so far this financial year (three months in).

Much of this improvement, though, may owe much to the one-off bounce in tourism post-Covid, so it is questionable the extent to which it can continue.

The government is, however, planning improvements on the revenue side, and has set itself a target of increasing fiscal revenues to 25% of GDP (implying an ambitious increase of 5ppts). For its part, the IMF recommend a comprehensive tax reform and growth-friendly spending measures in order to restore fiscal sustainability. The Article IV set out a menu of options on the revenue side.

But, as the Bahamas is a surveillance country for the Fund (not a programme country), the WEO only factors in modest further revenue gains, under a “no policy change” scenario (revenue measures are often delayed and underperform with respect to yield). Therefore, the WEO cautiously projects the deficit to remain at 5.4% in the current financial year (FY 22/23), and to narrow gradually to 1.7% in 2027. Hence, the IMF sees a higher deficit than the government did in its budget, and even compared with the Article IV. The government’s budget projected a deficit of 4.3% in the current financial year (FY 22/23), and 0.9% in FY 23/24, and moving into a surplus of 1.9% in FY 24/25.

Meanwhile, the IMF projects government debt to fall to 87% of GDP in the current financial year, down from 91% in the financial year just ended, and a peak of 103% in FY 20/21, and to fall to 80% over the medium term in the WEO (no policy change scenario). Stronger nominal GDP will also help the debt to fall as a share of GDP. Still, debt is currently 30ppts higher than it was pre-pandemic. 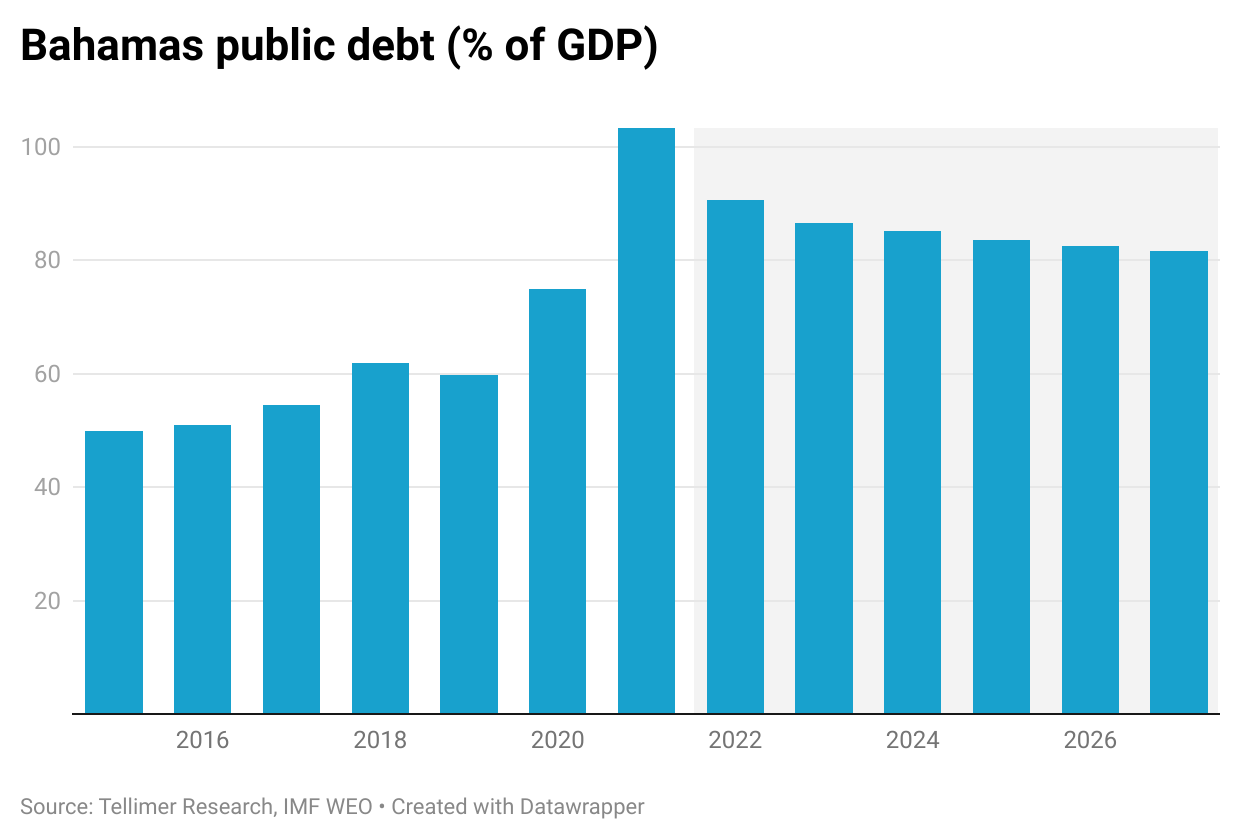 But in the IMF’s active scenario, a primary surplus of 1.5% of GDP (compared with a deficit of 1.7% currently) brings the debt down more quickly, with debt/GDP falling to 50% by 2032/33. This may be less ambitious than the government’s own plans, but it would be enough and is certainly more realistic. The government’s budget instead targeted a primary surplus of 5.1% by FY 24/25, which we think would make the size of the fiscal adjustment (with a 7ppts swing in the primary balance) pretty unprecedented.

The high deficit also means high gross fiscal financing needs (18% of GDP, according to the IMF), which could present a challenge given tighter global financing conditions, and loss of market access (double-digit yields on its international bond issues), forcing reliance on multilateral development banks and domestic financing, or more creative sources of finance – such as the Inter-American Development Bank's (IADB) partially guaranteed bond issue in June. It is unclear to us how much more appetite there will be from the IADB (or others) to continue providing policy-based guarantees to underwrite further bond issues and perpetuate what might be seen as an unsustainable situation. 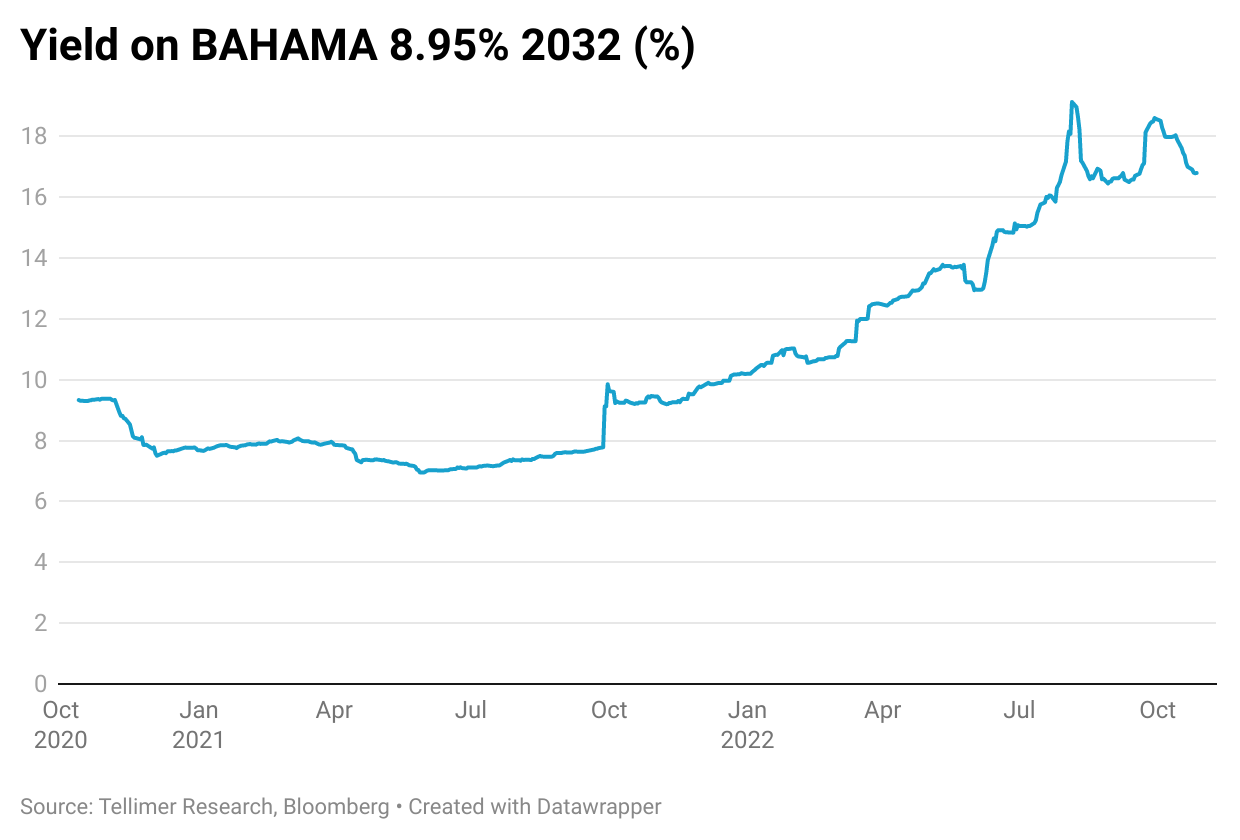 Fiscal consolidation, therefore, needs to continue and, despite last year’s improvement, there is no room for complacency. We do, however, detect a greater sense of urgency from the authorities and the new PLP government has a strong mandate to deliver it. But it has now been in power for over a year and these things (taking tough decisions) are best done early.

We downgrade our recommendation on Bahamas (B1/B+/-) to Hold from Buy, with a yield of 16.8% (price US$64.4) on the BAHAMA 8.95% 2032 bond on a mid-price basis as of cob 26 October on Bloomberg. The bonds have fallen 28pts (-30%) this year (yield up 660bps) and are down 13pts since we assigned a Buy on 1 June, since when global financial conditions have tightened more markedly, although their high coupon has meant they have performed broadly in line with the index (a total return of -23% ytd vs -24% for the Bloomberg EM Sovereign USD index).

Although we recognise the tourism-led recovery and some fiscal improvement, and the government’s intentions, we turn more cautious given implementation risks and, crucially, the lack of visibility over financing sources, especially ahead of the US$300mn bond maturity in January 2024, as we expect tighter global financial conditions to persist for some time. Moody’s recent downgrade (from Ba3 to B1 on 6 October) may also weigh on technicals. The rating agency cited a higher degree of government liquidity risk with constrained funding options amid elevated external borrowing costs. Moreover, the government’s appointment of sovereign debt advisors may also have added to investors' anxiety.

That said, the strong reserves position and low cash prices that may not be too out of line with reasonable assumptions on recovery could provide a floor to prices. And the Bahamas always has the option of going to the IMF for a programme (we don’t think there is any interest in a programme at this stage). Such a request could be seen as positive by bondholders, at the risk of signalling the situation is more serious than we thought, but there might also be concerns as to what any programme would contain, given the debt situation. 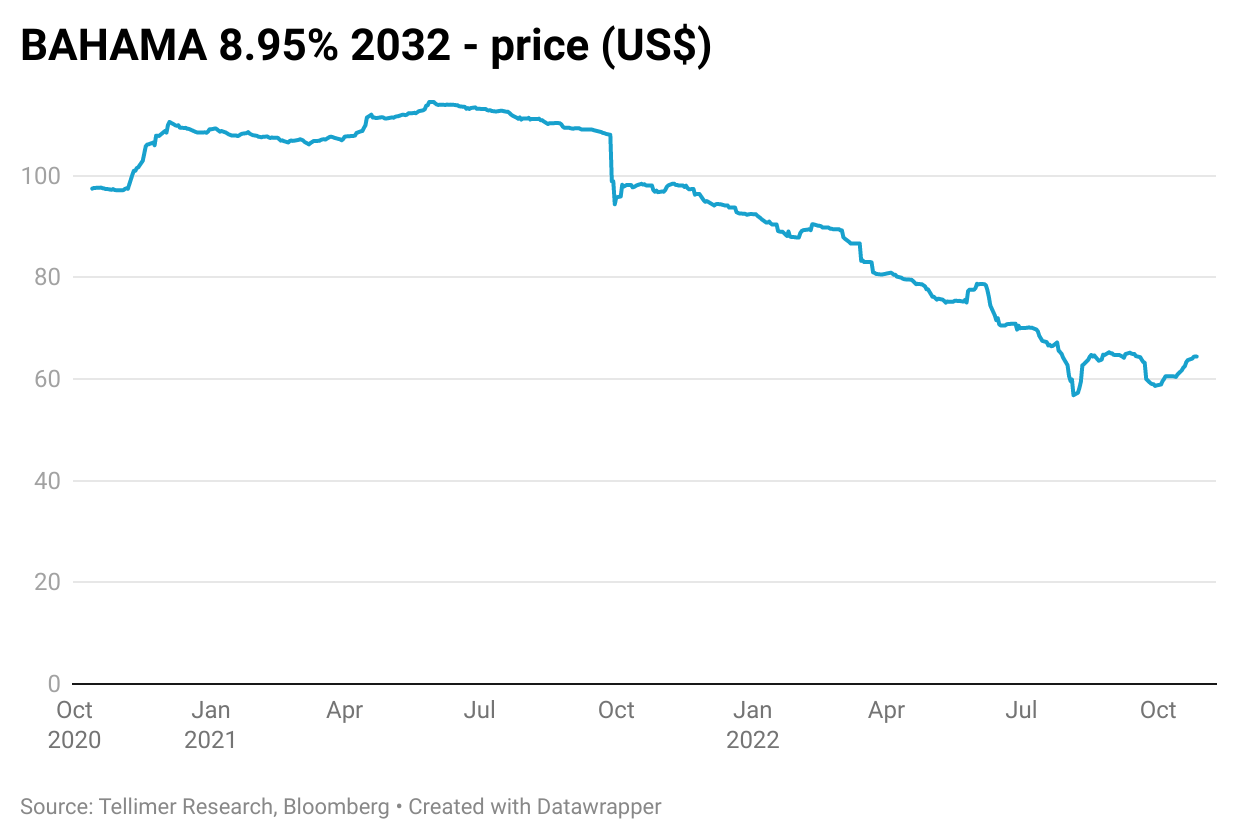