We reiterate our view on why an Iran war is unlikely following last week’s attacks on Saudi Aramco facilities. The vulnerability to attack of core GCC oil assets, regardless of whether or not Iran was the ultimate perpetrator in this instance, demonstrates the cost to the GCC, the oil market and the global economy should conflict with Iran escalate into a full-blown war. This perhaps also explains the apparent absence of an immediate retaliatory military response by those laying the blame for these attacks on Iran.

In May, after four oil tankers were damaged by explosions near Fujairah port, we listed 10 reasons why war was unlikely, reaffirming that view after attacks on two oil tankers in the Gulf of Oman in June:

The counter-case: rational or irrational irrationality

The main risk to our thesis, ie what could make this time different, is if the US should no longer be viewed as a rational, or at least, conventional actor; i.e. it is more willing to engage in military brinkmanship and adventurism. Certainly, if the US administration can successfully shape the anti-Iran narrative domestically, particularly with the next presidential election in November 2020, then this non-conventional approach likely persists. There is survey evidence, illustrated below, to show that 1) the US general public’s view of the threat posed by specific countries is quite volatile (malleable) and 2) among Republican supporters currently, Iran is viewed as a greater threat than Russia, China or North Korea.

Usually in balanced conflicts, where one adversary is, in conventional terms, much stronger than the other, it is usually a dominant strategy of the weaker protagonist to portray maximum unpredictability, unconventional tactics and irrationality. The weaker adversary portrays the willingness to take more extreme action because it has less to lose from disrupting the status quo. On the other hand, the stronger protagonist has more to lose from disrupting the status quo and therefore acts in a more restrained manner. The historical behaviour of Iran (particularly under Ahmadinejad), Iraq (under Saddam), Libya (under Qaddafi) or North Korea (particularly under Kim Jong Un), in terms of their respective conflict with the US, supports this theory.

Arguably, this theory has been flipped around in the current phase of the US-Iran conflict: presidential tweeting undermines State Department-led diplomacy, reneging on the nuclear sanctions deal compromises US credibility in future negotiations and makes for frostier relations with the EU, and threatens a war that is likely uncontrollable and un-winnable.

Whether the approach of the Trump administration is the result of a loss of faith in the conventional approach (ie that approach has failed, the nuclear deal was insufficient in scope, and therefore to achieve a better deal quickly there is rationality in portraying irrationality), the capture of US foreign policy by much narrower interest groups than historically (eg an increasingly right-wing and authoritarian Israeli government) or a result of genuine incompetence and irrationality is, ultimately, a moot point. 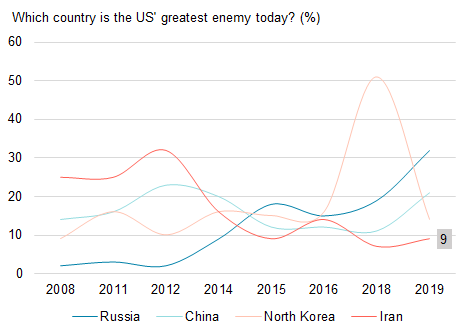 Figure 2: US public perception of foreign policy threat on a partisan basis – limiting the power of which country should be a top foreign policy priority (%, Nov 2018) 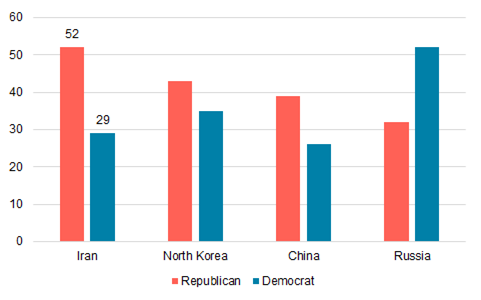