We update our 10%-ers, a list of the number of countries with foreign bonds yielding 10% or more (or which are in default), as a proxy for who is, or might be, in distress.

There are 13 countries with sovereign US$ bonds that have a yield of 10% or more (or are in default), on our count. That is the same as our last count, in August, although there have been some changes in the composition, and two more than this time last year. It is also five more than we measured in December 2019.

Given the EM bond market sell-off since September, and ongoing taper tantrum fears throughout the year, as well as the increasing emergence of idiosyncratic risks in a number of smaller EM or frontiers, it may be no surprise that the count is so high. The surprise may in fact be why it is not even higher. 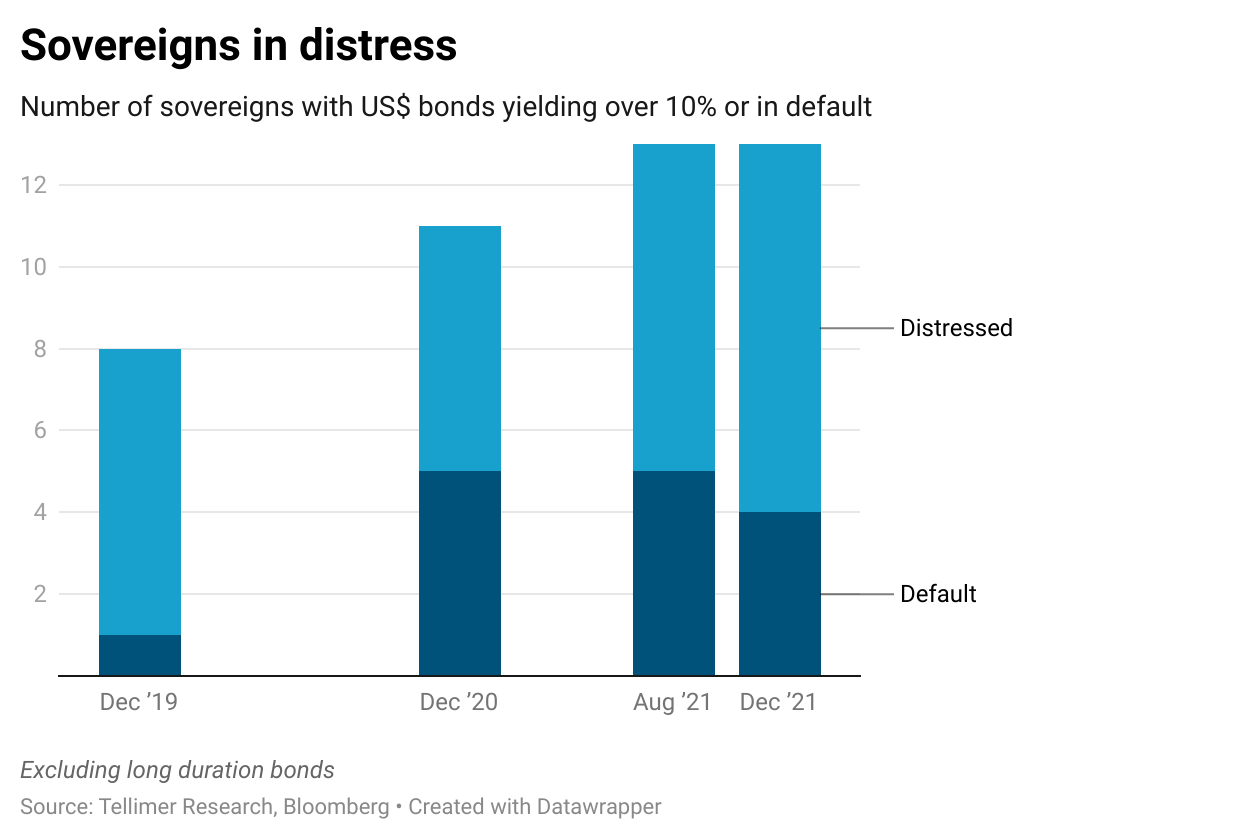 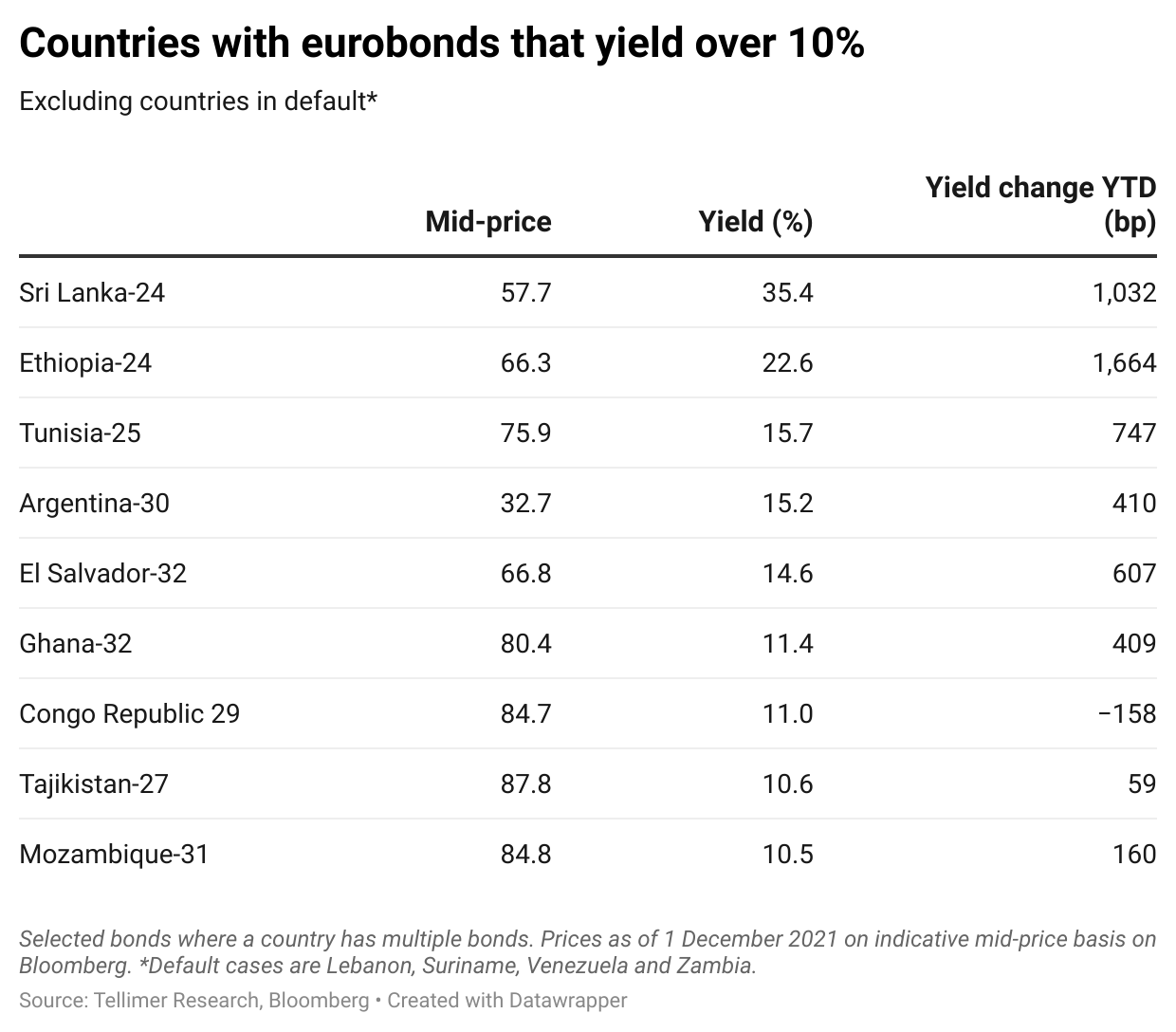 Of the nine, seven are unchanged from our list in August (Argentina, El Salvador, Ethiopia, Mozambique, Republic of Congo, Sri Lanka and Tunisia) while Ghana (excluding the small 2022 and 2023 maturities and the 2030 guaranteed bond) and Tajikistan are new additions. Grenada has fallen off the list, just (with the '30s now yielding c9.8%, at an indicative mid-price of US$90.5, according to StoneX prices, although the bond is very small and illiquid).

Compared with a year ago, there were six countries yielding 10% or more (excluding those in default). Four now on the list were also on the list back then (Argentina, Republic of Congo and Sri Lanka remain on the list; while Tajikistan fell off after a rally in the middle of this year but is now back on). Ecuador and the Seychelles, which were on the list a year ago, have fallen off.

The list of four countries in default – Lebanon, Suriname, Venezuela and Zambia – compares with five in August, and a year ago, after Belize retired its defaulted superbond in a cash buyback that was completed last month, and just one (Venezuela) in December 2019 (after both Barbados and Mozambique resolved their defaults through restructuring).

There have been no hard (payment) defaults so far this year if contractually agreed payment deferrals are excluded. However, these defaulters could be joined by:

In terms of prices, defaulted Venezuela (sanctions) and Lebanon (a mess) are the lowest cash prices (single figures or teens). Amazingly enough, these are followed by performing Argentina (prices in the low 30s on the 30s), which could prompt some interest at some point, and Sri Lanka (excluding the front end, bonds are in the 50s). Defaulted Suriname and Zambia are in the mid-70s. Interestingly, after the selloff in Ghana and rally in Zambia, Ghana 6.375% 2027s are priced nearly flat to defaulted Zambia 8.97% 2027s, with only a 7-point price difference (it was as low as 5 points), although the difference would be greater if we account for past due interest (PDI) on Zambia’s bond.

We estimate the total outstanding amount of “distressed” sovereign US$ bonds (defaulters and those yielding over 10%) is US$170bn (nominal). Three countries (Argentina, Lebanon and Venezuela) account for three-quarters of this, while six countries (those three plus El Salvador, Ghana and Sri Lanka) account for 95%. 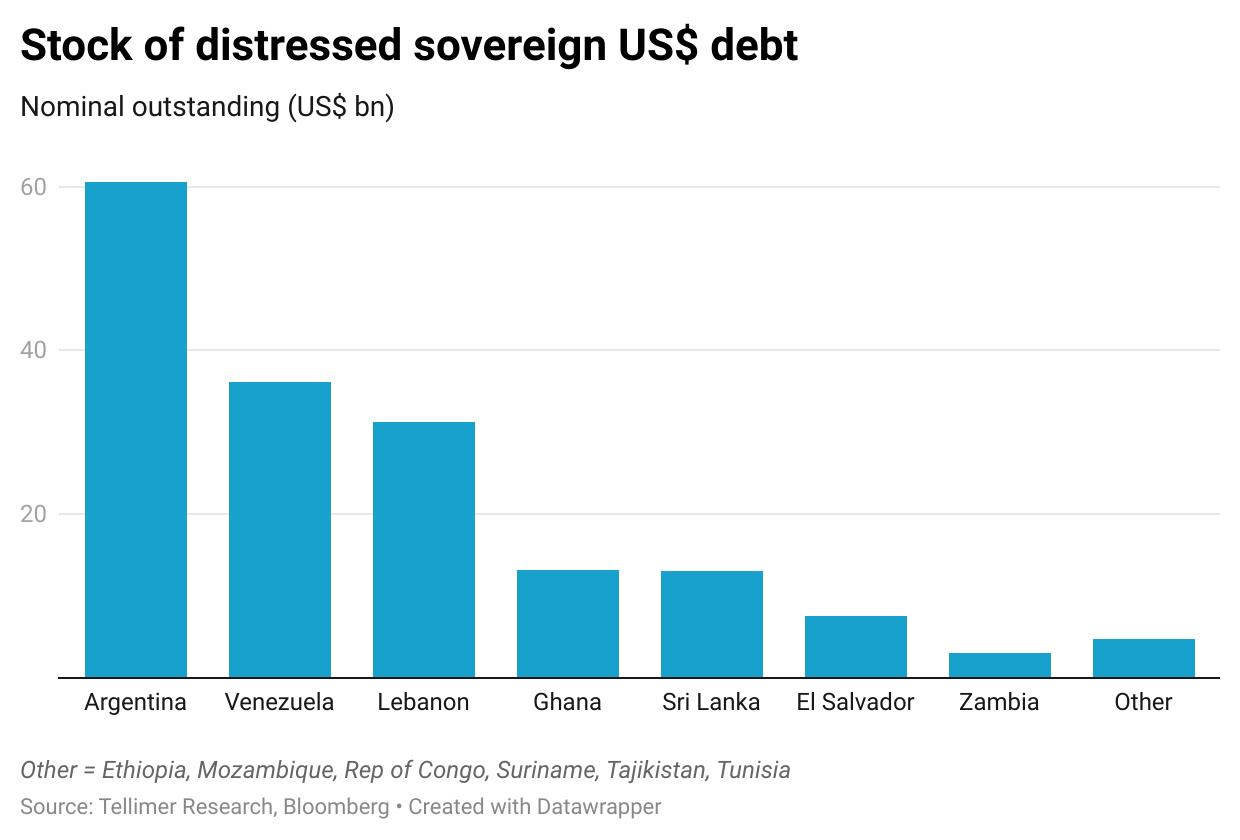