The 10%-ers: Number of high-yield sovereigns stands at series high

In light of recent market declines, we update our "10%-ers" – a list of the number of countries with foreign dollar bonds yielding 10% or more (or which are in default), as a proxy for who is, or might be, in distress.

There are a staggering 27 countries with sovereign US$ bonds that have a yield of 10% or more (or are in default), on our count (26 if we exclude Gabon, whose presence on the list is more tenuous). This is easily the highest number we've seen on our measure since we began collating this data over a decade or so ago on a periodic basis. It is double the amount we saw in our last update in December 2021 (13), and more than three times the amount (8) we measured in December 2019 (pre-Covid).

The sharp increase in the number of distressed sovereigns is a result of the EM bond market sell-off caused by the twin shocks of 1) the deterioration in external conditions linked to the war in Ukraine and 2) higher global interest rates due to monetary policy normalisation in the US (and in other advanced economies). Average nominal EM yields have hit 7% as a result.

Our measure tallies with the IMF assessment that says nearly 60% of low income countries (LICs) are either in, or at high risk of, debt distress, although the interesting thing here is that our measure extends beyond LICs into mainstream EM. In fact, only about half of our list are LICs. 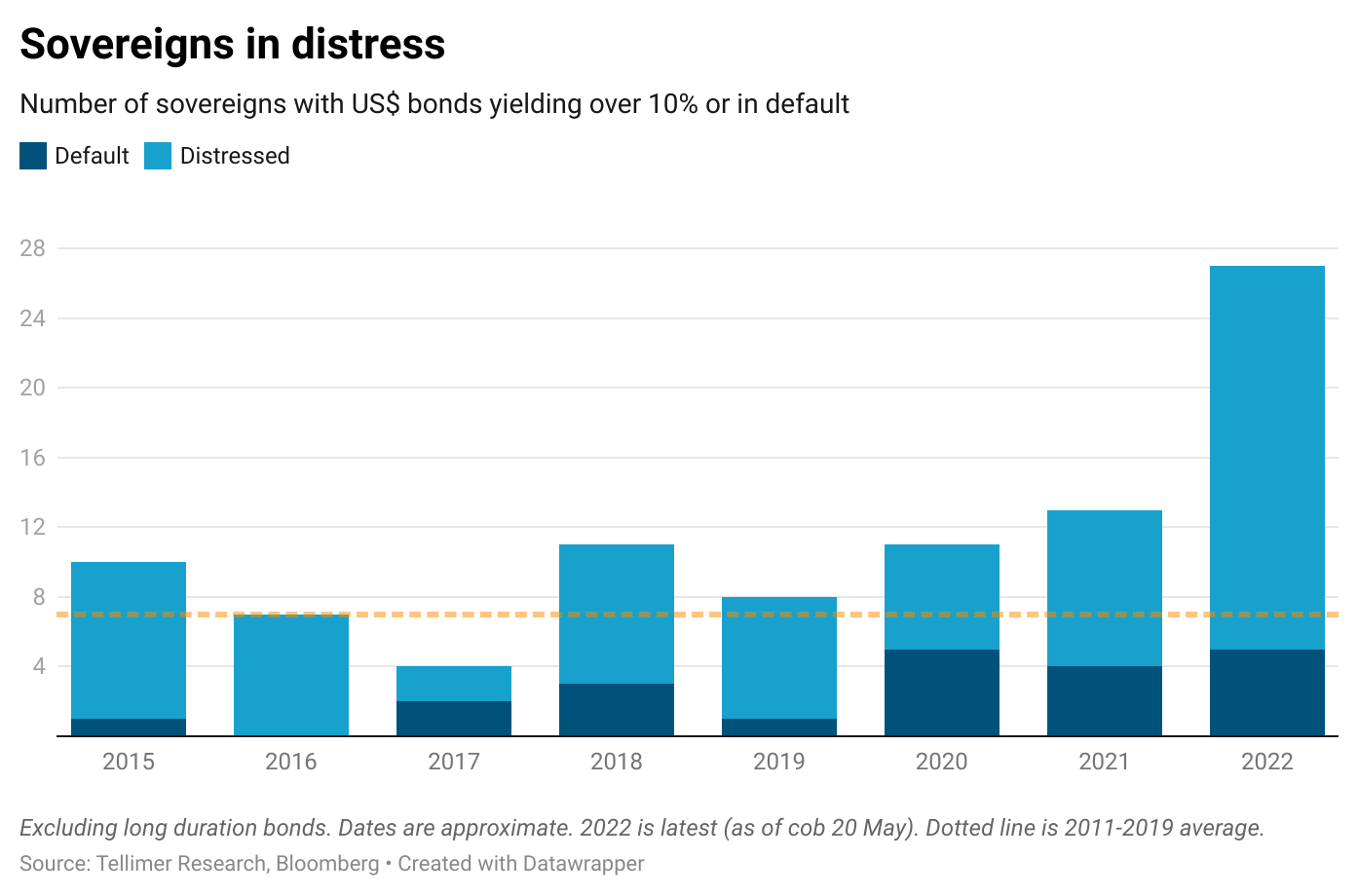 Our list includes five countries in default – one more than in December, as Sri Lanka joined Lebanon, Suriname, Venezuela and Zambia, after it announced a debt moratorium on 12 April (and subsequently fell into hard default following the non-payment of coupons on the 23s and 28s after the end of the 30-day grace period on 18 May).

Sri Lanka is, so far, the only sovereign default this year. Eyes are also on Russia (and Belarus), which may go into default if US sanctions block payments to bondholders, or if Russia decides it simply won't or cannot pay. Meanwhile, Ethiopia, another default candidate coming into this year, is still current on its sole eurobond as it navigates its way through the Common Framework. El Salvador continues to be a concern, with limited financing options ahead of its January 2023 maturity, as does Tunisia.

Of these, eight are unchanged from December (Ethiopia, Tunisia, Argentina, El Salvador, Ghana, Congo Republic, Tajikistan and Mozambique) as Sri Lanka moves onto the default list. That means there are 14 countries that have entered the list this year. These include three (Russia, Belarus and Ukraine) that are a direct consequence of Russia's invasion of Ukraine three months ago, and one (Egypt) that is an indirect consequence, while Pakistan is suffering from its own home-grown political crisis.

The remaining nine new entries include a mix of high-beta names (Ecuador, Angola), highly indebted and tourist-dependent island nations (Bahamas, Maldives), and an eclectic mix of countries with policy or political risks, or other vulnerabilities (PNG, Honduras, Nigeria, Kenya, Gabon). As noted, Gabon's presence on the list is tenuous, with one 10-year bond (7% 2031) yielding above 10% and the other (6.625% 2031) below it. 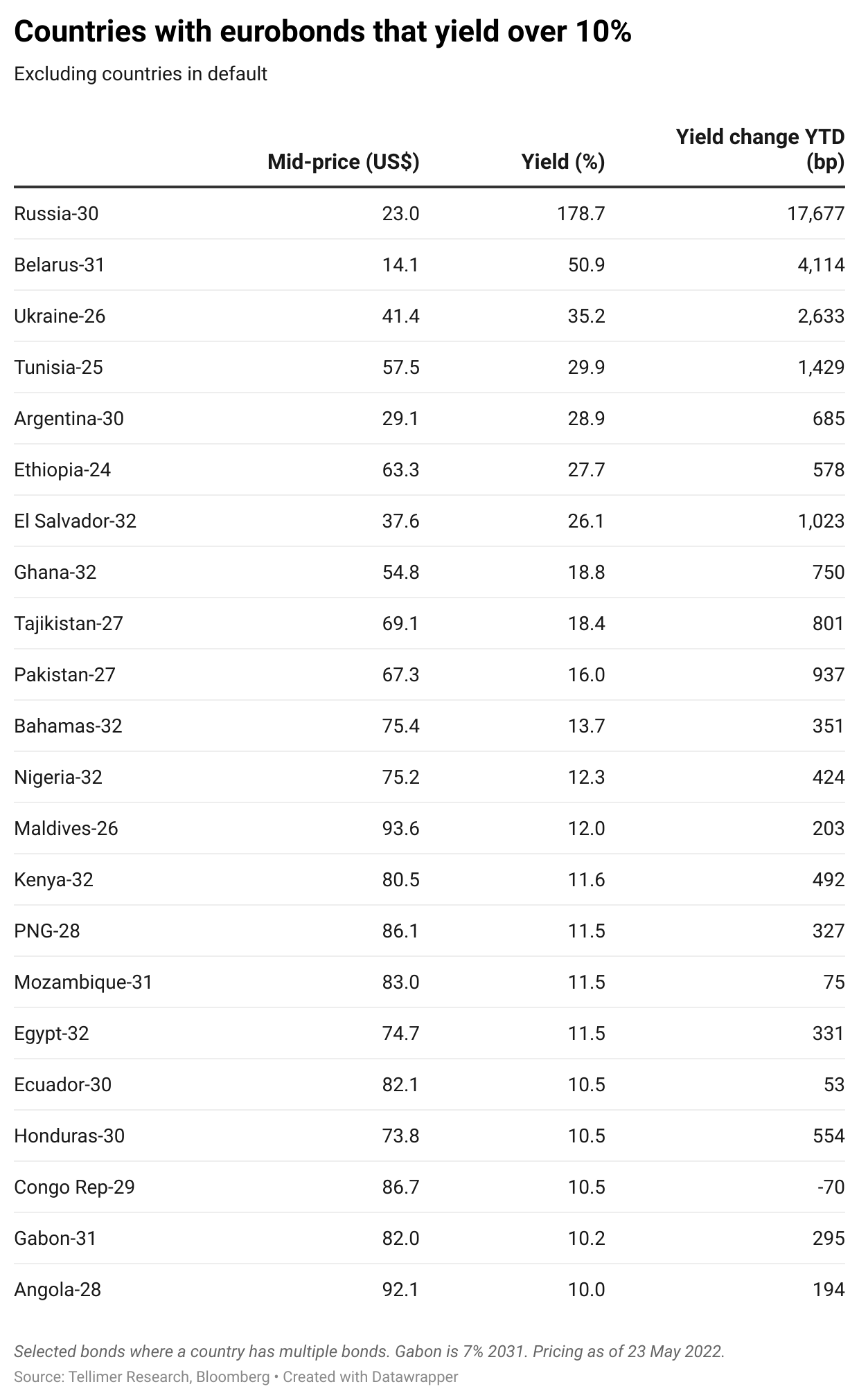 We count 13 countries in the EMBIGD with a spread of over 1,000bps (15 if we include the excluded Russia and Belarus). This is c20% of the number of countries in the index (19% ex-Russia/Belarus and 22% with them), which is generally where the share has been since March. This compares with nine countries (13% of the index) at the end of 2021. 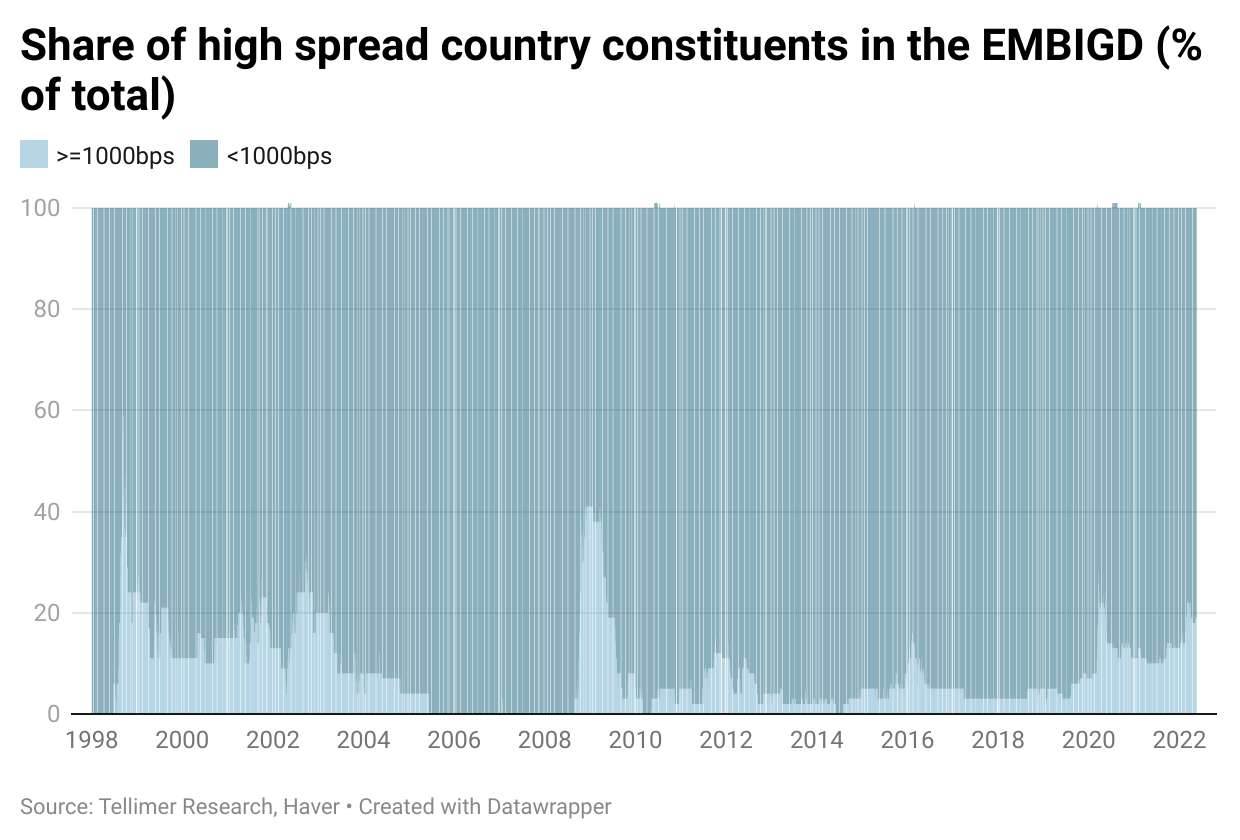