9 May 2019
Published by
Tellimer Research

Thailand’s official election results, released on 8 May, are close enough to allow both the incumbent military-aligned party to claim it can form a majority coalition in the lower house of Parliament and the opposition Shinawatra-aligned parties (which are about 1% shy of a majority) to dispute the results. The continuation of divisions between military and Shinawatra-centred camps is exactly in line with our expectations prior to the election and after the initial vote count. It remains unclear, however, whether violent disruption is more likely: thus far, the opposition is calling for appeals, not protests.

The Prime Minister is chosen by both the 250-member upper house of Parliament (which is appointed entirely by the military) and the 500-member lower house (which is elected). With complete backing of the upper house the military-aligned candidate for PM, current leader Prayut Chan-o-cha, required merely 25% of the lower house. This was already secured in the initial vote count for directly elected seats on 25 March.

Yesterday's official results included both 349 directly elected seats and 149 seats ("party list seats") allocated on the basis of the popular vote nationwide. (One directly elected seat and one allocated seat have been held back because the winning candidate in the direct election was subsequently disqualified.)

Recall that the nationwide vote of the military-aligned party, Palang Pracharath, was surprisingly high when first disclosed on the night of the election and they received an additional 18 allocated seats. In contrast, the main Shinawatra-led party, Pheu Thai, received no seats among the 149 allocated seats. Overall, these allocated seats were shared by 27 parties (including 13 parties which received 1 seat each but may have polled lower than the threshold 71,000 votes).

A slim legislative majority coalition, which is reliant on a number of very small parties, and ongoing dissent over its legitimacy, likely continues to inhibit Thailand's ability to attract long-term investment and materially accelerate its growth. Ongoing political division also likely means the government tends towards authoritarianism in politics and populism in economics, i.e. continuing fiscal stimulus for the consumer (e.g. the package of welfare cardholder benefits and personal income tax payer deductibles passed at the end of April, which equated to 0.2% of GDP).

Thai equities, measured by the local SET index, are up 10% ytd, broadly in line with MSCI FM and EM. Valuation, at the level of the index, is not compelling in our view: trailing PB of 1.8x (trailing ROE of 11%) and trailing PE is 17.3x, both are close to respective 5-year medians. Forward PE is 15.3x with consensus earnings growth of 13%.

There is, however, little FX rate risk: although there is about 10% downside to the real effective exchange rate, there is no trigger in sight with import cover over 10 months and a current account surplus of 7%.

Within the Thai market, populist economics and risks to mobilising investment suggest a bias to Consumer stocks is in order. Bottom-up, Tellimer analyst Nirgunan Tiruchelvam sees value and near-term catalysts in THBEV and CPF.

In our Asia equity coverage there is more compelling growth on offer in Bangladesh and Vietnam, a better combination of value and growth in Indonesia, Philippines and Malaysia, and cheaper value in Pakistan and Sri Lanka. 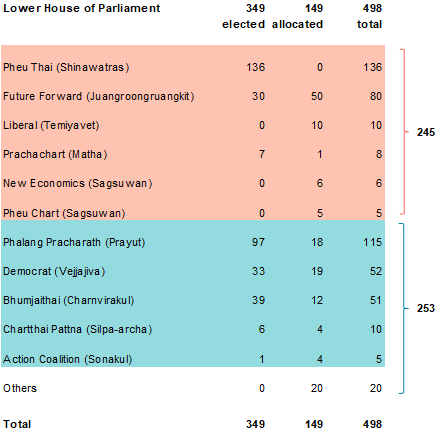