Frontier sovereigns, or High Yield (HY) emerging market bonds have outperformed Investment Grade EM and mainstream EM this year, as investors in riskier bonds put aside concerns about the impact of a repeat of the taper tantrum seen earlier. 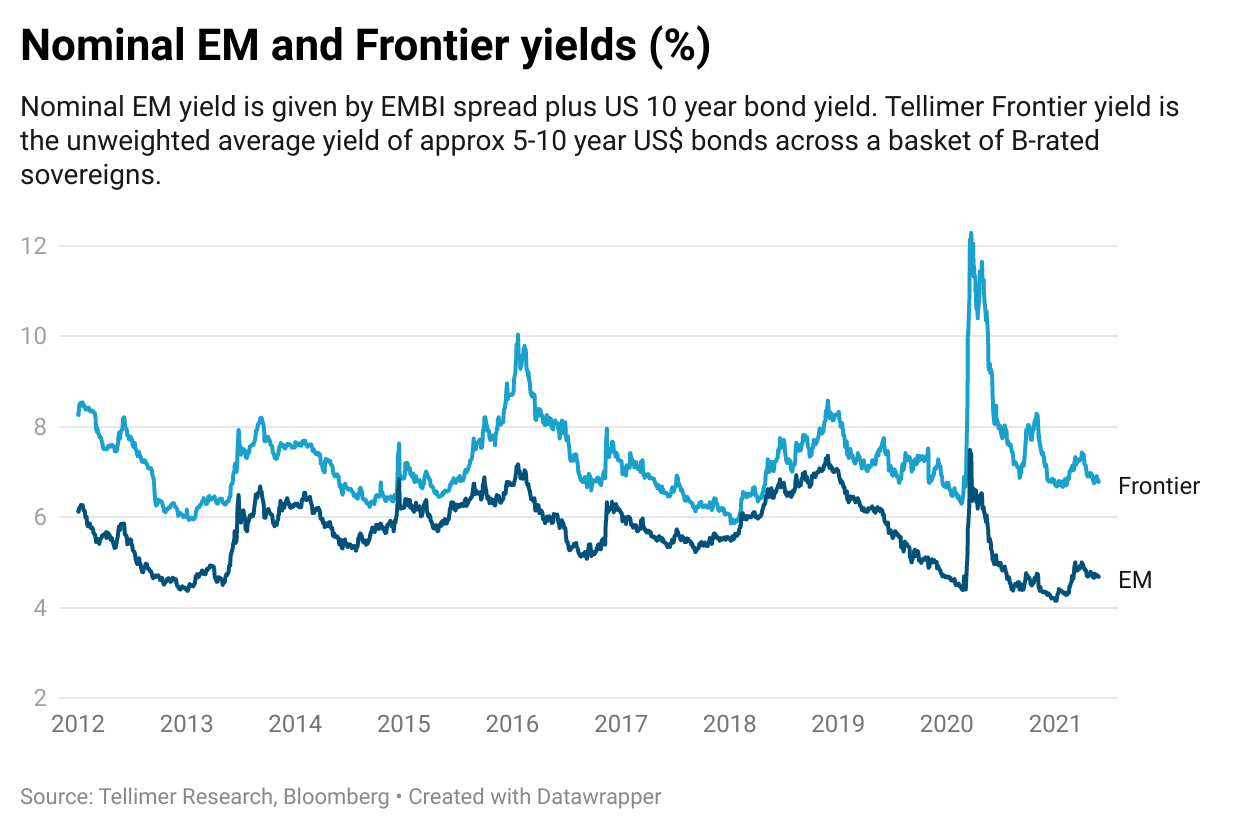 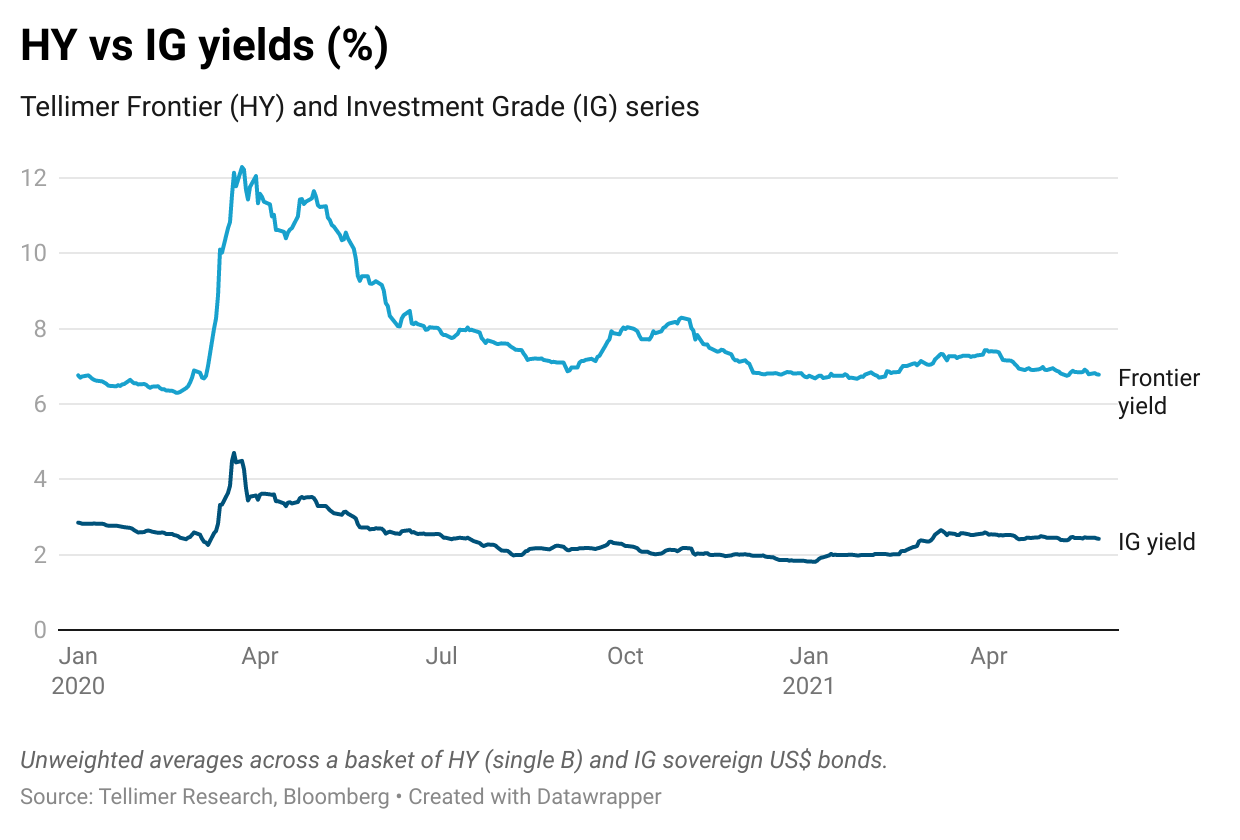 As a result, the Tellimer "frontier premium", measured by the difference between frontier and EM yields, and a proxy for the illiquidity and higher credit risk in frontier bonds compared to other EM, now stands at 210bps, having achieved its lowest levels since the pandemic. The frontier premium has narrowed by 46bps this year, although it remains well wide of its average, let alone lows.

The HY-IG spread (proxied by the Tellimer Frontier yield less IG yield) now stands at 4.37%, only around 40bps wide of its pre-Covid level. 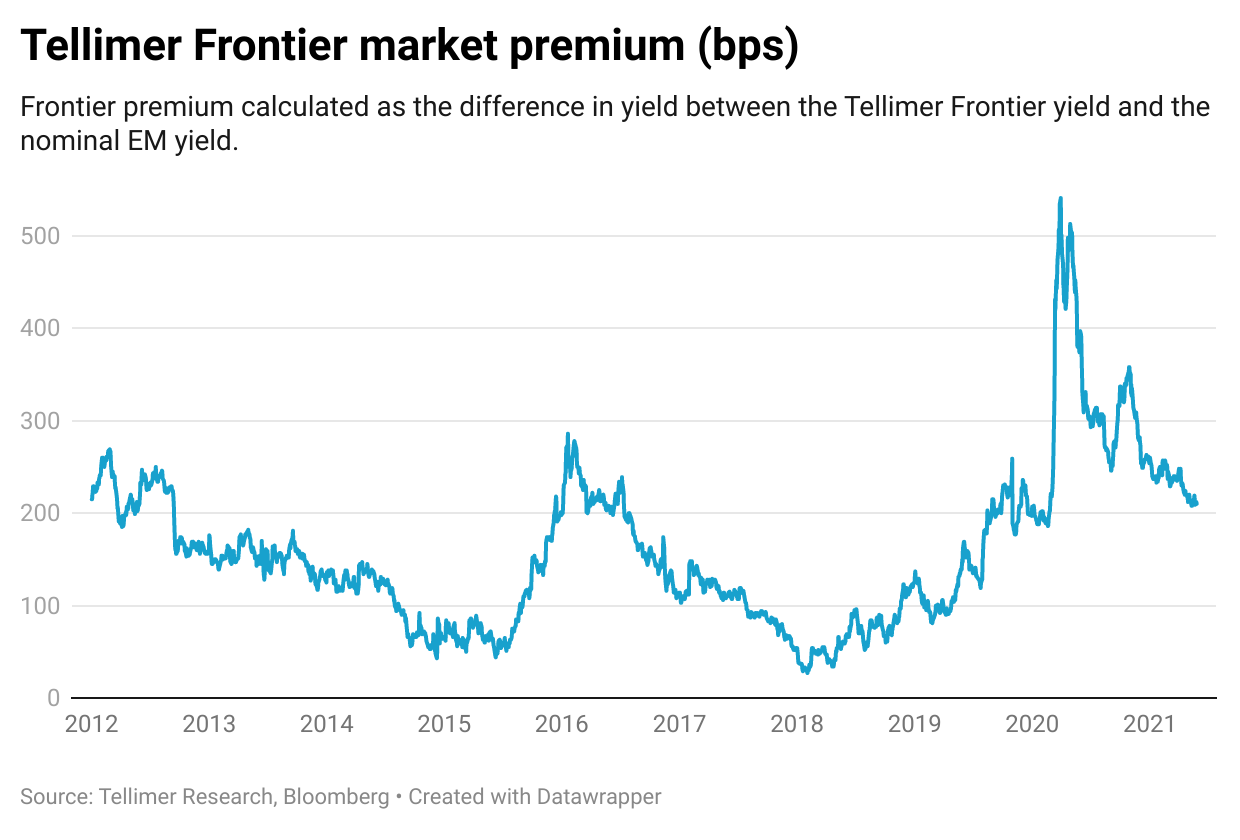 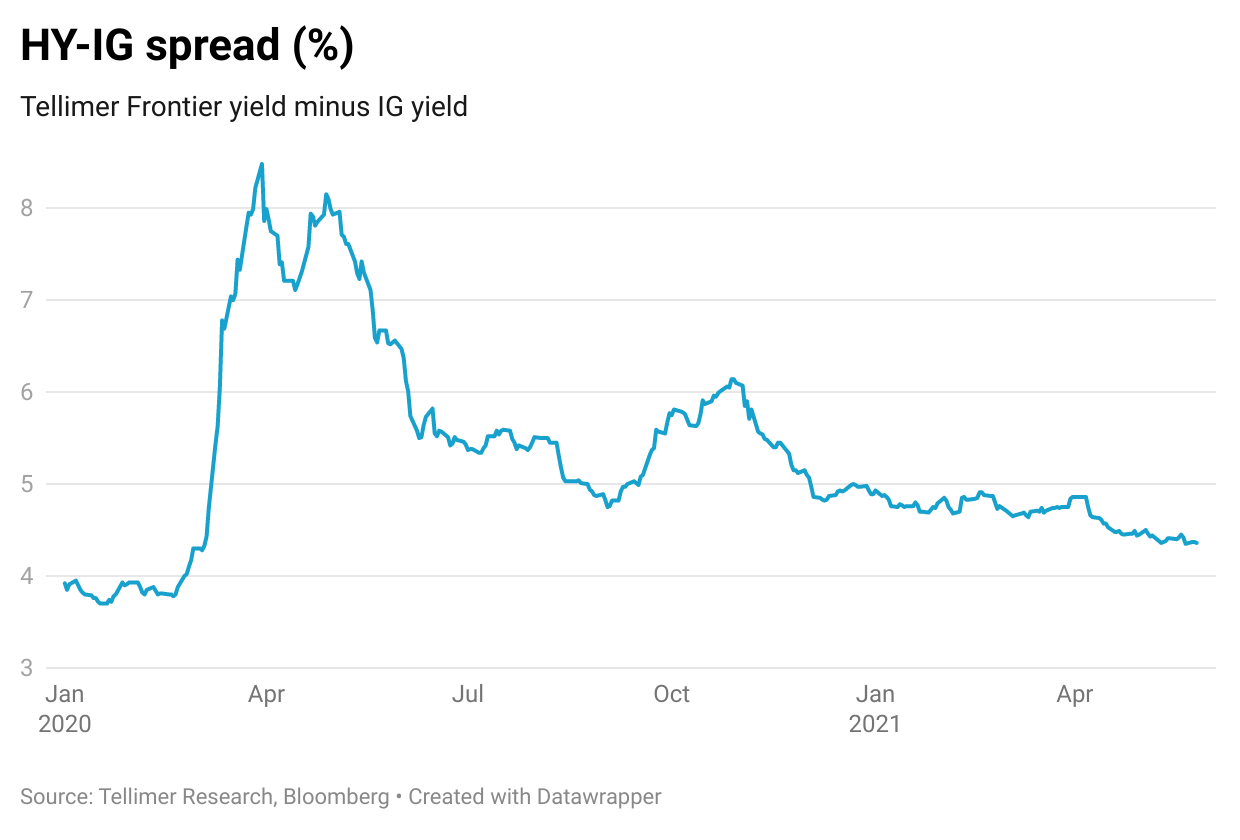 Recall that nominal EM yields repeatedly hit all-time lows in the final weeks of 2020 as the Biden reflation trade and positive vaccine news fuelled a year-end rally. Yields hit an all-time low of 4.34% in November on our measure, and continued to decline to set a new low of 4.15% at year-end. This was driven by the risk-free rate as the EM risk premium widened, a phenomenon that has largely been reversed this year (see below). What was noticeable also, was that the post-Covid recovery in EM bonds was initially led by IG names, with HY catching up later.

But nominal EM yields have risen this year. Nominal EM yields even reached 5% on our calculations in early March, an increase of 85bps this year, but have since recovered some of this increase.

A decomposition of nominal EM yields shows that this year's increase is due entirely to higher US yields. US bond yields have risen 69bps YTD (from 0.92% to 1.61%) while the EMBI spread has declined by 16bps (from 323bps to 307bps); that is, EM country risk remains well anchored in the aftermath of the pandemic mainly on the back of global policy stimulus, despite prospects for higher US rates.

A number of factors may help explain the outperformance of frontier sovereigns this year, with sentiment supported by (1) higher oil and other commodity prices, which will help to improve fiscal and external accounts; (2) fading concerns over a wave of sovereign defaults after a record number last year and the (so far) lack of requests for a Common Framework treatment (only three, namely, Chad, Ethiopia and Zambia), which had provoked additional uncertainty at the beginning of the year over who might be next; (3) the liquidity injection offered by the proposed SDR allocation; (4) improving prospects for the global post-pandemic economic recovery and vaccine rollouts in Developed Markets (although less so in EM, such as in Africa), and of course (5) the continuing search for yield in a low yield environment. These factors, certainly the first three, may benefit frontiers disproportionately more than other EM.

SSA sovereign bonds have been particular beneficiaries of these trends, outperforming the Frontier index on our calculations. The yield on the SSA sub-component in our frontier index has declined by 2bps YTD to 6.31%, compared to the 7bps rise in the aggregate frontier index. As a result, the SSA premium has been eliminated. On our series, post-Covid, the SSA component has traded through the Frontier index since October.

We think there might be more scope for frontiers to continue to outperform EM bonds in the near term. Despite the outperformance of frontiers so far, which has taken the frontier yield 37bps below its pre-Covid average, it remains 92bps wide of its series low (5.86% achieved in January 2018). We think further compression is therefore likely although one might question the extent to which frontiers in a post-pandemic world of higher debt should be able to revisit previous lows.

Indeed, the frontier premium, which we calculate to be c200bps, provides ample compensation for their lower liquidity, and is still some 70bps wide of its pre-Covid average.

On the other hand, EM upside may be limited. With nominal EM yields 54bps above their all-time low, achieved at the end of 2020, this might suggest further upside is possible on EM bonds, although this might rely more on spread compression (improvements in country risk) than lower US bond yields. The EMBI spread at 307bps is some 65bps wide of its post-GFC low, indicating some upside may be possible (although the point remains as to whether such narrowing can be achieved in the context of weaker post-Covid fundamentals). We think there might be more of a cushion to support lower frontier yields, through a reduction in the frontier premium. 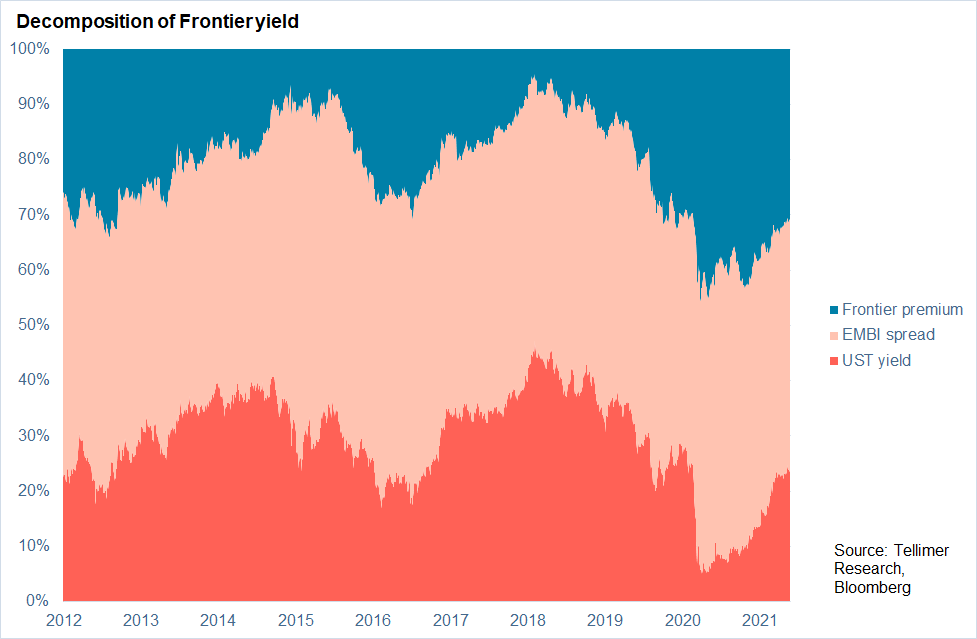 That said, frontiers' outperformance comes despite weaker fundamentals, in terms of higher public debt burdens, and amid challenges to fiscal consolidation. For instance, we calculate that for the countries in our frontier index (a subset of the entirety of frontier markets, and hence likely an underestimate), public debt rose about 10ppts last year to 70% of GDP, and will rise another 8ppts this year, to 77% of GDP, based on IMF WEO projections; that's a near 20ppts rise in two years. While measures of affordability (low interest rates) may help mitigate some of the risks from higher debt, for now, this cannot be relied on to continue indefinitely, added to which uncertainty over their post-Covid growth prospects mean it may not be possible for countries to grow out of their debt problems either as they might have been able to do in the past.

Moreover, frontier bond valuations cannot depart too far, for too long, from mainstream EM. In particular, historically, frontier yields have tended to rise in reaction to a sustained period of wider em yields with a lag, mainly due to their illiquidity, so there is a risk that we see weakness in frontiers in coming weeks. 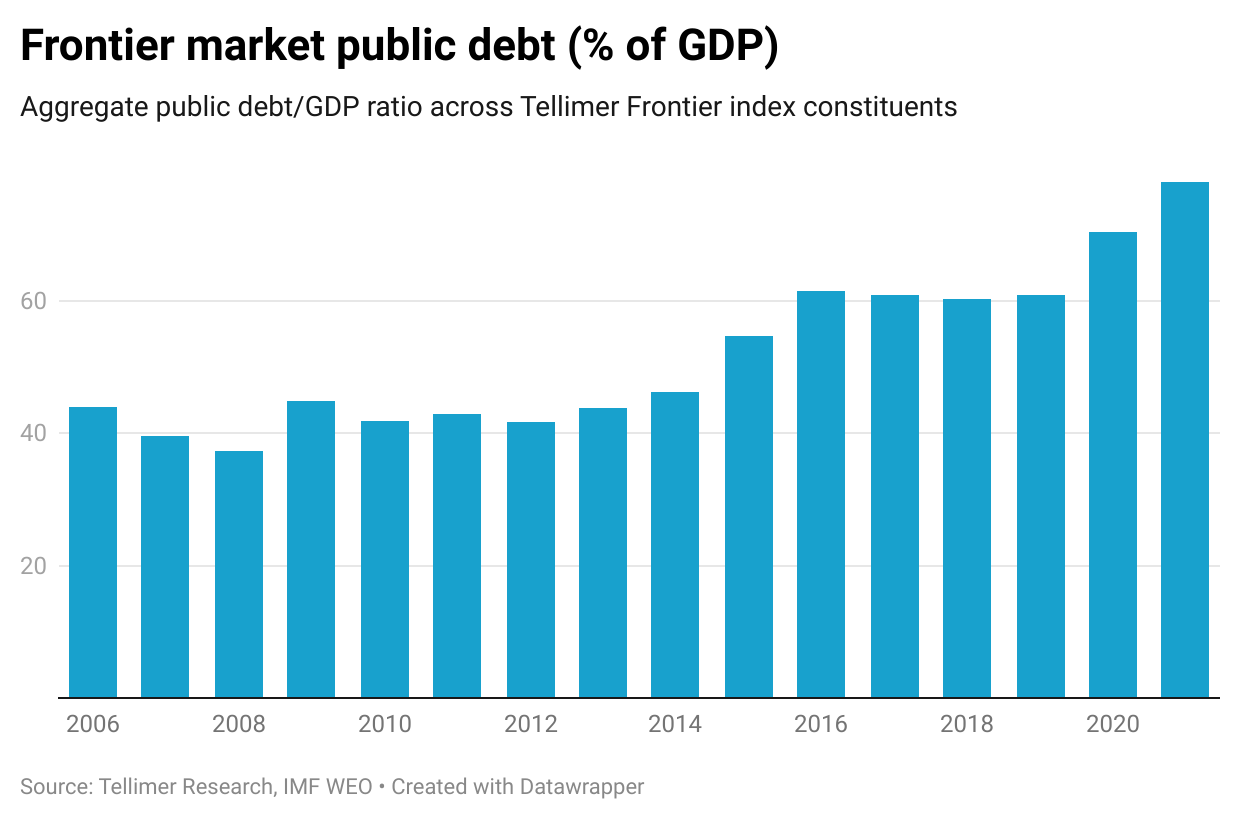 About the Tellimer Frontier Bonds Index