With Covid-19 cases and deaths in India over 25mn and 250k, respectively, few investors, let alone the Indian Medical Association, believe that the country's healthcare crisis can be resolved by drinking cow urine, smearing cow dung over the body, swallowing Coronil herbal tablets, or inhaling steam. Daily new cases, as recently as 17 May, are running 20% higher than a month ago and 20x higher than at the start of the year. 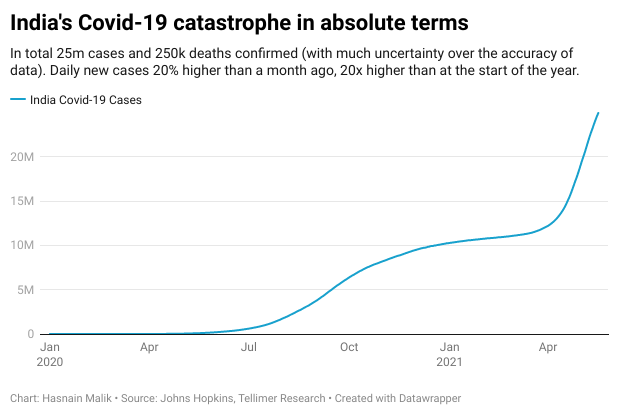 However, India does not look as traumatic when scaled by population, even if reported numbers are multiplied by a factor 10x. Whether India's healthcare system is much more critically stretched by a similar incidence of cases and whether government policy could have been more effective, of course, remain open questions. 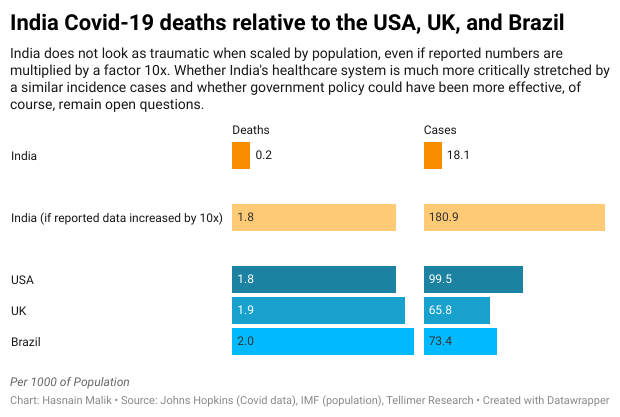 Nevertheless, if we assume that a governing coalition led by the BJP offers the best prospect of structural economic reform, the electoral appeal of India's ruling BJP is highly dependent on the image of Prime Minister Modi, and the Covid-19 catastrophe hurts both economic recovery and somewhat tarnishes that image, then the two key questions for investors in Indian equities are:

Answering these questions leads us to remain positive on equities in India: despite the absolute scale of the Covid-19 tragedy and the likely cut to near-term growth expectations, India remains an attractive, albeit imperfect, mix of value relative to history, particularly in Tech, macroeconomic growth and structural reform.

Some scratches, but still Teflon Modi

Modi's personal appeal has survived challenges from demonetisation. slowing economic growth, the whiff of corruption (the Rafale deal), and the farmers' protests. However, the crisis precipitated by the second Covid-19 wave appears to have made a much more meaningful dent.

According to Morning Consult, Modi's approval rating dropped to 63% by mid-May (from 76% at the start of the year) and disapproval jumped to 31% (from 20% ) – although the reliability of a survey of c2,000 in an eligible voter population of close to a billion is open to question).

More meaningfully, the performance of the BJP in the West Bengal state elections fell short of what it might have expected when campaigning started, prior to the Covid-19 crisis – while the BJP increased its seat count in the West Bengal state legislature election in May from 1% to 24%, it did not repeat its 2019 general election performance of 43% of national legislature seats from the same state. 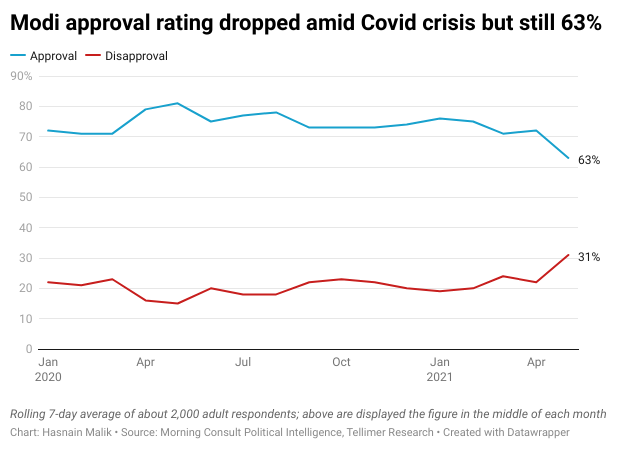 The next large-scale state legislature election is scheduled for February-March of 2022 in the state of Uttar Pradesh, which accounts for 17% of the population, 15% of the lower house of the national parliament, and 13% of the upper house. 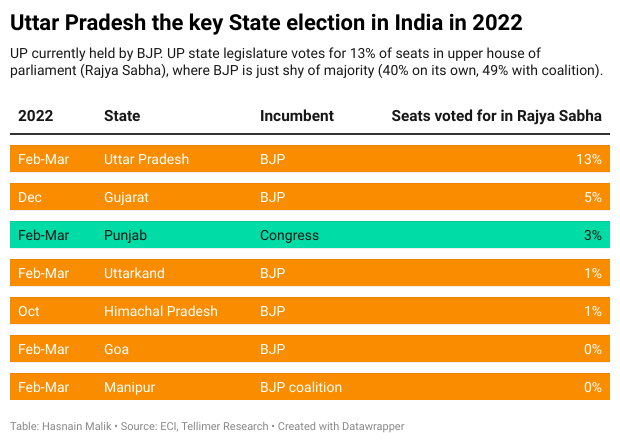 Uttar Pradesh is India's largest state. Proportionate to the US electoral college it could be thought of as the equivalent of Texas and Florida, or of California and Pennsylvania. 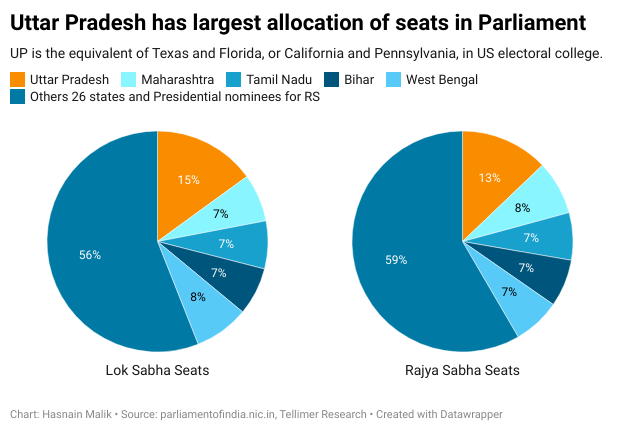 The BJP currently dominates the Uttar Pradesh legislature with 77% of seats. But this has not always been the case. After the 2021 election its share was as low as 12% and in 2002 it suffered a big loss, from 41% to 22%. A reversal of similar magnitude in Q1 2022 would clearly spook investors as to the prospects of the BJP in the May 2024 national elections, and with it their hopes for structural economic reform. 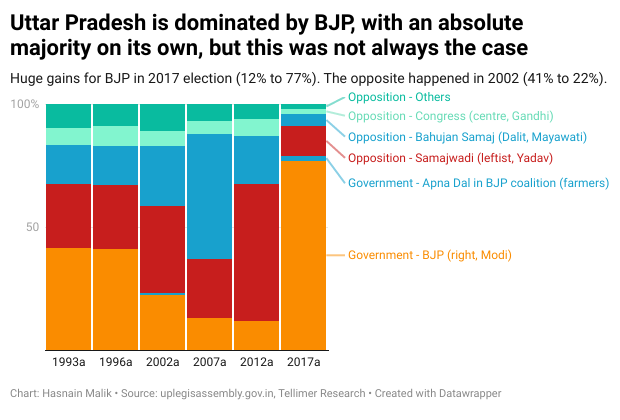 The progress of Covid-19 in India will no doubt have a bearing on the state elections in 2022. However, to extrapolate a potential stumble by the BJP in those elections to its prospects in the national elections is not merited: India does not have the bipartisan politics of the US or the bipolar politics of Brazil where, at the national level, two equally organised camps usually compete head-to-head.

In India the decline of the Congress party, with merely 10% and 15% of the lower and upper houses of parliament, mean that, at the national level, it will be a contest between the BJP, albeit a potentially wounded one, and a highly fragmented opposition with no nationally unifying, charismatic leader.

Furthermore, with those national elections about two years away there is a lot of time left for the BJP government to do a better job on Covid-19, or at least to market the message to its own supporters that the blame for the healthcare crisis lay with the opposition politicians running the state governments out of its control, and to take credit for an economic rebound.

The realistic downside scenario for the BJP is more likely setbacks at the state level, which means diminished prospects of gaining control of the upper house of parliament (given it is voted for by state legislators, not the general public), rather than a lower house of parliament reversal in 2024. 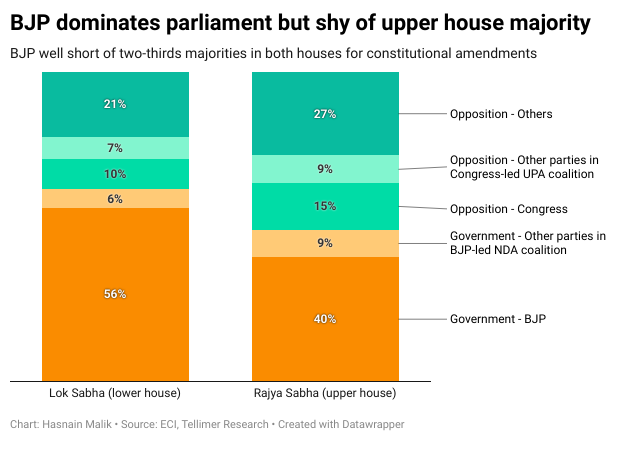 To answer the question above on equity valuation, consider what the forward PE multiple (versus the five-year median) would look like with less optimistic aggregate earnings growth forecasts.

Current published expectations imply a very sharp bounce-back this year: 12% real GDP growth and 17% nominal GDP growth, according to the IMF, and 37% aggregate Sensex corporate earnings growth. Obviously, these are at risk (the IMF has acknowledged as much). 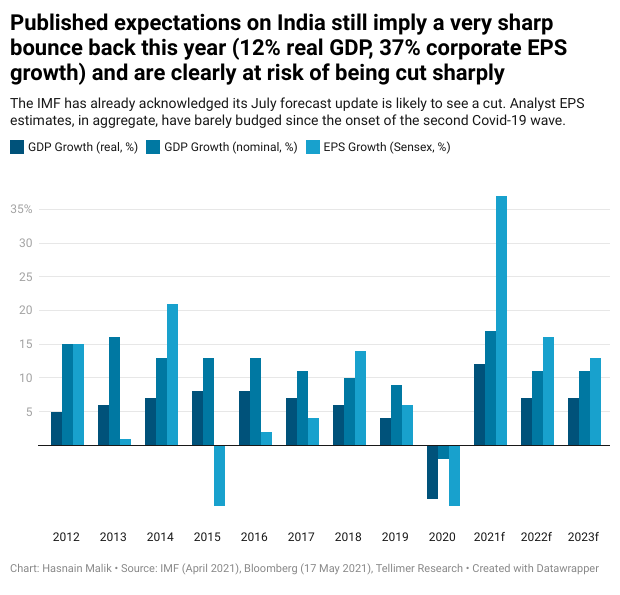 The fiscal deficit in 2021, forecast at 10% of GDP by the IMF, will obviously take a hit. While this means more crowding out of private sector credit, with total government debt/GDP of c90%, the absence of significant short-term external debt (to GDP, the ratio is merely 5%) and a healthy buffer of foreign reserves (15 months of import cover) should make for low risk to the FX rate. 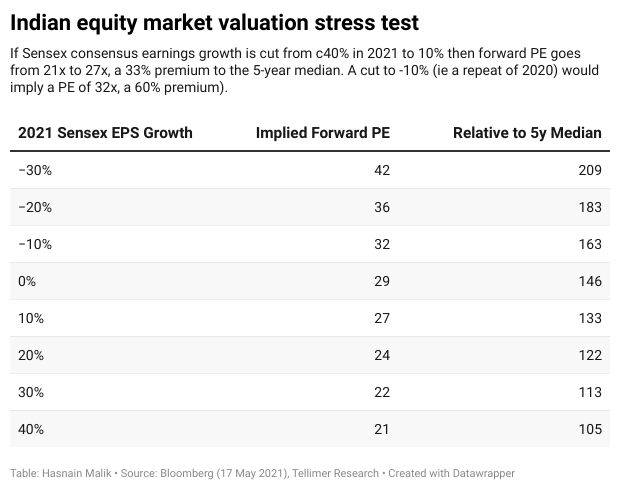 Death by Covid-19 or starvation: Your Hobbesian Hobson’s choice in poorer EM, April 2020