Tech war: Is Big Tech the new oil or the new defense?

On 15 January, Sweden’s Supreme Administrative Court ruled against Huawei and ZTE, allowing Sweden’s telecoms authority to proceed with a 5G auction that excluded the two Chinese companies on 19 January. Behind the scenes, Ericsson’s CEO Borje Ekholm is reported to have lobbied to change course and open the auction to his Chinese competitors. Huawei still has two more outstanding court cases in Sweden, but the auction process is proceeding as planned.

Ekholm’s decision to lobby for Huawei’s inclusion is understandable. Ericsson is the world’s second-largest network equipment provider. While Sweden accounted for only 0.26% of Ericsson’s global sales in 2019, China accounted for 7%, and Ericsson has signed 5G framework agreements with three of China’s top mobile operators. With one-quarter of the global network equipment market, Ericsson needs healthy access to global markets, including China, and is right to worry that the Swedish decision to ban Huawei risks retaliation.

Figure 1: As the second-largest supplier of network equipment, Ericsson needs the Chinese market 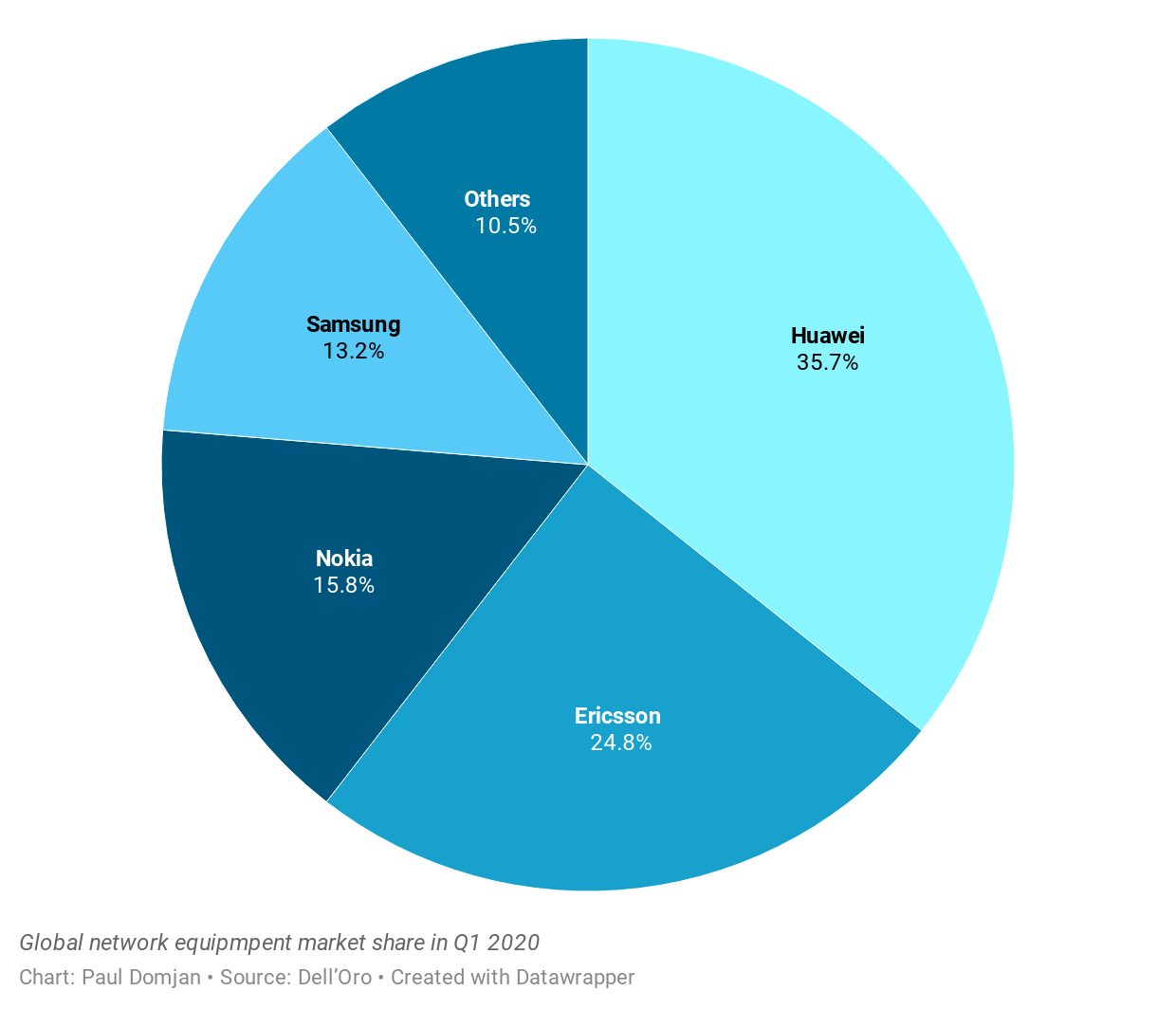 Ericsson faces a similar challenge to many global technology firms that must juggle politically to retain access to both new growth opportunities in China and core revenue in the US and Europe. 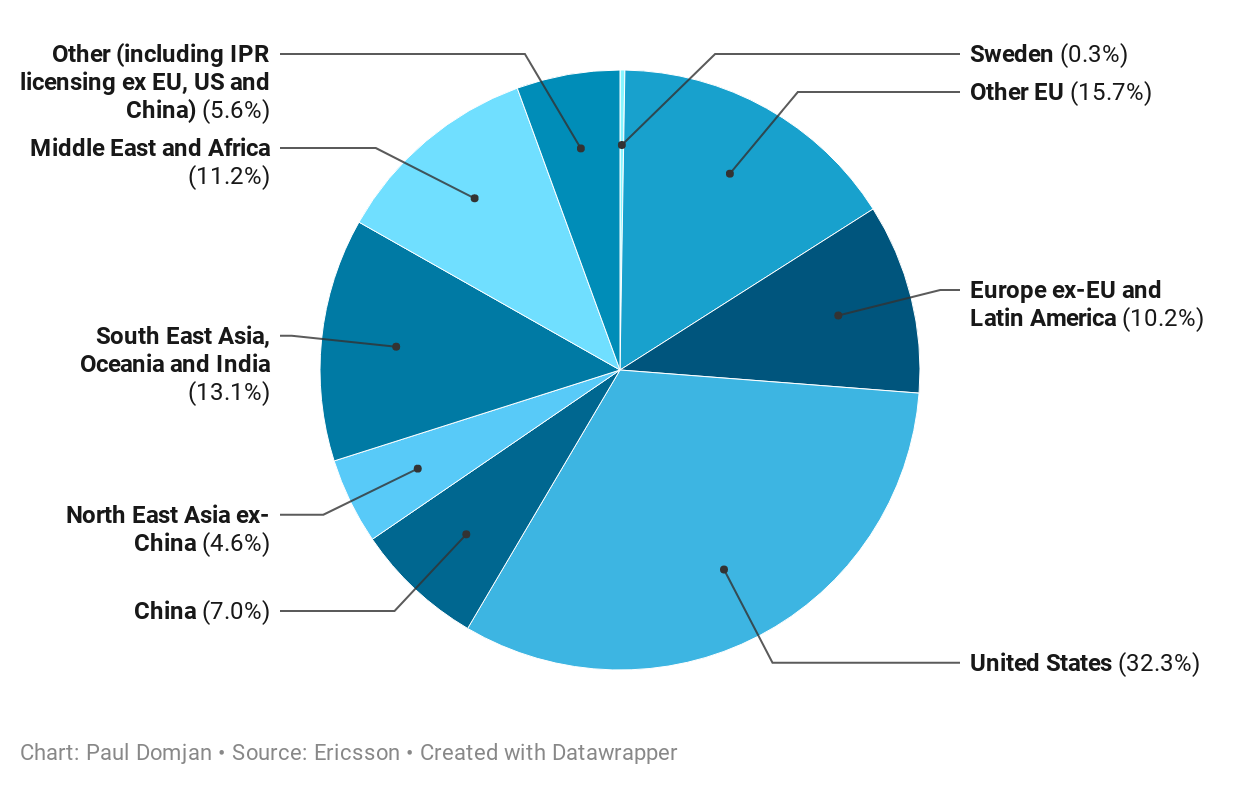 And Ericsson isn’t alone. Even Apple, the king of US tech, faces a similar dilemma, with the bulk of its revenue in the US and Europe, but its fastest growth in China. 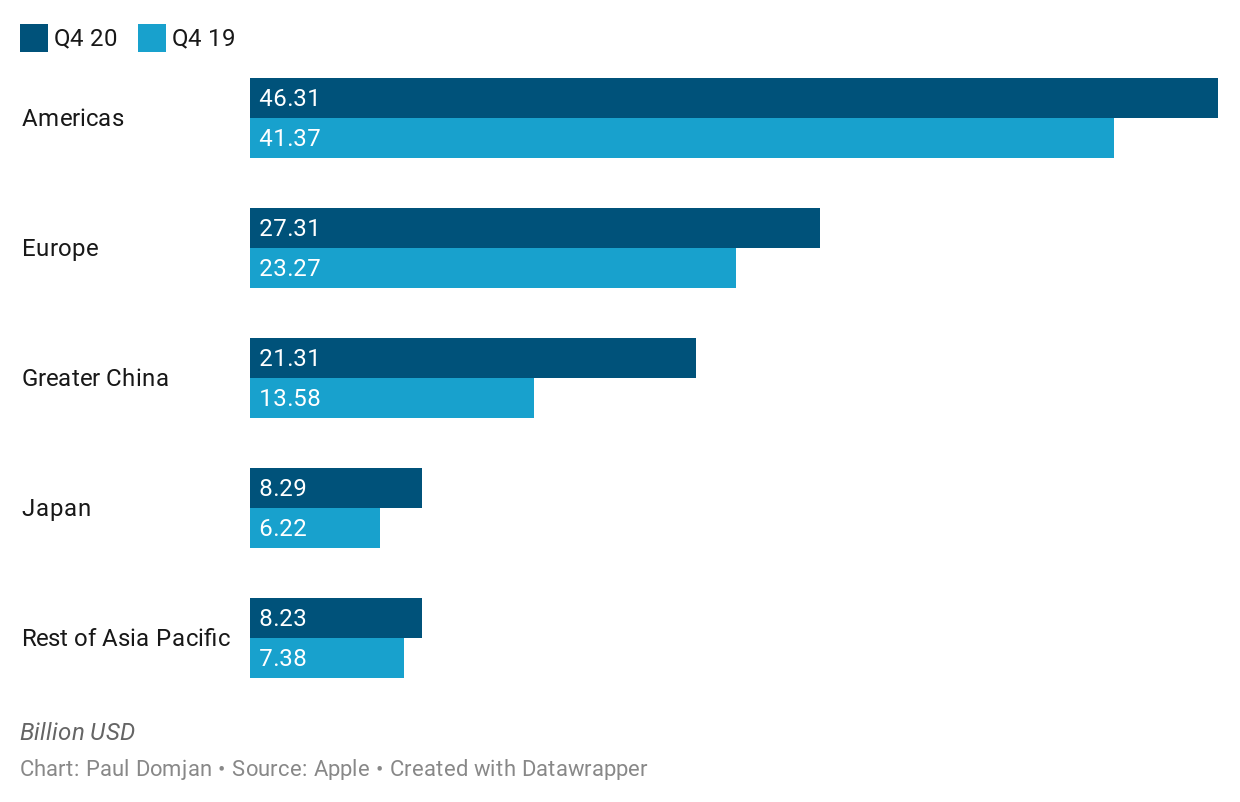 The tech war is transforming under Biden

Meanwhile, China has shown the strength of its ability to retaliate. Minutes after the Trump administration ended, China imposed sanctions on 30 key Trump administration officials. The list includes former Secretary of State Mike Pompeo, former national security advisors, senior appointed diplomats, and former Health and Human Services Secretary Alex Azar, who angered China by becoming the highest ranking US official to visit Taiwan since the US switched its diplomatic recognition to China in 1979. Not only are they now banned from entering China, but any entity with which they are associate will be banned from doing business with China. Pompeo, whom a Chinese Foreign Ministry spokesman described as the “joke of the century”, might have a future at the infamous Four Seasons, but the better-known hotel chain with seven properties in China would not be able to employ him, nor would most other international businesses. Looking beyond the aftermath of the Trump administration, the Peterson Institute, available on Tellimer, has catalogued China’s growing skill at “the sanctions game”.

While some might have hoped that this parting shot at the Trump Administration would presage an easing of the tech war, in fact it is simply becoming more complex. The entire Biden foreign policy team appears to view China as a long-term competitor, a significant departure from Obama-era policy. Jake Sullivan, Biden’s National Security Advisor, and Kurt Campbell, the new White House Coordinator for the Indo-Pacific, have argued persuasively that US policy towards China should seek “a steady state of clear-eyed coexistence on terms favorable to US interests and values [involving] elements of competition and cooperation….” They recognise that “[t]his might mean considerable friction in the near term as US policy moves beyond engagement.”

At the same time, they argue that the Cold War analogy of containment is inappropriate, as China is “more formidable economically, more sophisticated diplomatically, and more flexible ideologically than the Soviet Union ever was.” They argue that the US government must engage allies in this competition with China. At home, they want the US to adopt “a new US industrial policy” that leverages public investment among other tools to secure “American economic and technological leadership.”

The Biden administration appears unlikely to match the bluster and blunt policy choices of its predecessor, but the change of tone should not be misinterpreted as a departure from a policy of competition. Indeed, Secretary of State Blinken’s openness to Georgian NATO membership shows that China is not the only strategic competitor against which the Biden administration is considering active competition using alliances.

The risk of tech fragmentation is rising

When the US banned Huawei in the summer of 2020, I looked at how protracted tech wars could actually leave Huawei, and Chinese tech more generally, both stronger and more resilient against potential western meddling. Huawei seems to be pursuing a course similar to that which I outlined, having decided to spin out its mid-tier Honor brand to avoid US sanctions, while maintaining the option to buy it back in the future if circumstances change. Honor will initially focus on the Chinese market, but it could easily spearhead the expansion of Huawei’s homegrown HarmonyOS and Kirin chips into emerging markets in coming years.

The US now has a choice to make. Is tech policy towards China primarily about the risk of spying through network equipment, or is it about economic and technological dominance more broadly? If the former, then Honor will be able to rely on the close cooperation with Qualcomm, Intel, AMD and Microsoft that its CEO, George Zhao, plans to rekindle now that Honor is no longer constrained by US sanctions on Huawei. Similarly, while Ericsson rightly worries about Chinese retaliation, Apple could rest easy as Chinese sales continue to grow.

But if the tech wars are a competition for economic and technological dominance, then everything is potentially in play. Why should China allow US companies unfettered access to its markets if the US disrupts its ability to export? In this world, Huawei will not be the last tech giant to think carefully about how to structure itself to maximise access to the three keys markets of the US, the EU and China.

Is tech the new oil or the new defence?

The #wallstreetbets reddit-driven explosion of GameStop has been fun, if bizarre, to watch, but redditors may have bitten off more than they can chew targeting Nokia. In the Cold War, the SEC and US authorities would have thought twice before allowing fun and games with the securities of critical parts of the military-industrial complex. Following Nokia’s purchase of Alcatel-Lucent, parent company of the famed Bell Labs, in 2016, Nokia is now the closest thing that the US has to a manufacturer of network equipment. Neither the US nor the EU can afford to allow redditors to disrupt the financing of Nokia’s ongoing restructuring.

This points to the deeper investment implications of the Tech Wars. Markets are already digesting various short-term scenarios for restrictions on technology trade and global tech fragmentation, but have they worked through the changes in financing that will occur as the sector moves from being seen as the leading edge of private sector innovation to becoming a core part of the new industrial policy for which Sullivan and Campbell are campaigning? It will be ironic, but not at all surprising, if the Tech War that began with the Trump administration accusing Huawei of being a vehicle for Chinese state policy leaves all tech globally, to a lessor or greater degree, as a vehicle for state policy.

There are two models to consider in order to understand what tech might look like as a vehicle of state policy. On the one hand, we have the military-industrial complex, where the state plays a substantial role in shaping the activities of private companies. On the other hand, the oil and gas industry shows what tech might look like in a more fluid, less extreme tech war. The state plays a major role in shaping the oil and gas industry, whose products are a crucial underpinning of it. My Tellimer colleague Hasnain Malik has likened the exposure of TSMC, the world’s largest semiconductor manufacturer, to the Taiwan Strait to Middle East oil’s exposure to the Strait of Hormuz, and Germany’s recent diplomatic push to secure adequate supplies of automotive chips from TSMC echoes oil diplomacy between governments, not commercial negotiations between a manufacturer and its supplier.

Private oil companies often work closely with governments for geostrategic aims. Indeed, having begun my career working on transportation strategy in Eurasia at Shell, it was an easy and logical step for me to move across to continue working on the same issues at the US component of NATO. But this cooperation is typically ad hoc, sometimes contested, and focused on particular aims, not deep and continuous as in the case of the military-industrial complex. While nationality is very sharply defined in the military industrial complex, oil and gas companies are able to cooperate with governments despite being complex, multinational entities operating globally. One could argue, at a stretch, that Huawei gives a taste of what tech might look like in the military-industrial model, while Nokia is closer to tech in the oil and gas model.

Is the tech war the new climate change?

The oil and gas industry has one further lesson for the tech war. Most industry players, with the notable exceptions of Dong Energy, now Ørsted, and StatOil, now Equinor, were late to recognise that climate change was not simply another risk to include in the risk register, in government lobbying, in PR and communications, and in passing, in the annual report.

In the end, the failure to respond to climate change laid low mighty Exxon, taking it from the world’s largest public company to ejection from the S&P 500 in a decade. Meanwhile, a minnow like Dong Energy was able to seize the opportunity and become Ørsted, the world-beating wind producer. Tech companies, and their investors, need to be ready for the possibility that the tech war will be similarly transformative.