Taper Tantrum concerns back to the fore – the countries at risk

In February, worries that the Fed would begin tightening its monetary policy sooner than previously expected in reaction to the post-US election fiscal stimulus and vaccine reflation trade caused generalised weakness in emerging market (EM) assets. Many worryied that the asset class was in for a repeat of the 2013 'Taper Tantrum', which caused a selloff of EM debt and currencies.

This prompted us to create a scorecard to gauge vulnerability to another potential taper tantrum across 41 emerging and frontier markets. At the time, we found that smaller current account imbalances and non-resident holdings of government debt decreased the vulnerability of large and systemic EM, with the most vulnerable countries shifting from the original 'fragile five' of Brazil, India, Indonesia, South Africa and Turkey to the new 'fragile frontiers' of Jamaica, Tunisia, Ecuador, Sri Lanka, Belarus, Ethiopia, Laos, Bahrain and Oman.

In the months that followed, rates in the US largely stabilised. After rising from a low of c0.5% last August to c1.75% in March, the 10y US Treasury (UST) yield has settled at c1.5%. However, inflation surprises have seemingly sparked a hawkish shift at the Fed, with core PCE (the Fed’s preferred measure of inflation) rising from 1.4% yoy in February to 3.4% in May (the highest since December 1991 and above the Fed’s 2% average target) and CPI spiking from 1.7% to 5% over the same period (the highest since July 2008 and higher than the 4.7% Bloomberg survey consensus).

Although the Fed thinks the increase is transitory, driven in large part by base effects from the post-Covid slowdown, markets are increasingly concerned that it will be forced to taper its monthly asset purchases of US$120bn and/or hike rates sooner than initially expected, if inflation proves to be sticker than anticipated. This was compounded by the FOMC meeting on 15-16 June, which saw the number of committee members expecting a rate hike in 2022 rising to seven from just four in March and a median forecast of two rate hikes by the end of 2023 from zero at the previous meeting. Markets expect a clearer policy signal to emerge at the Fed’s Jackson Hole symposium at the end of August. 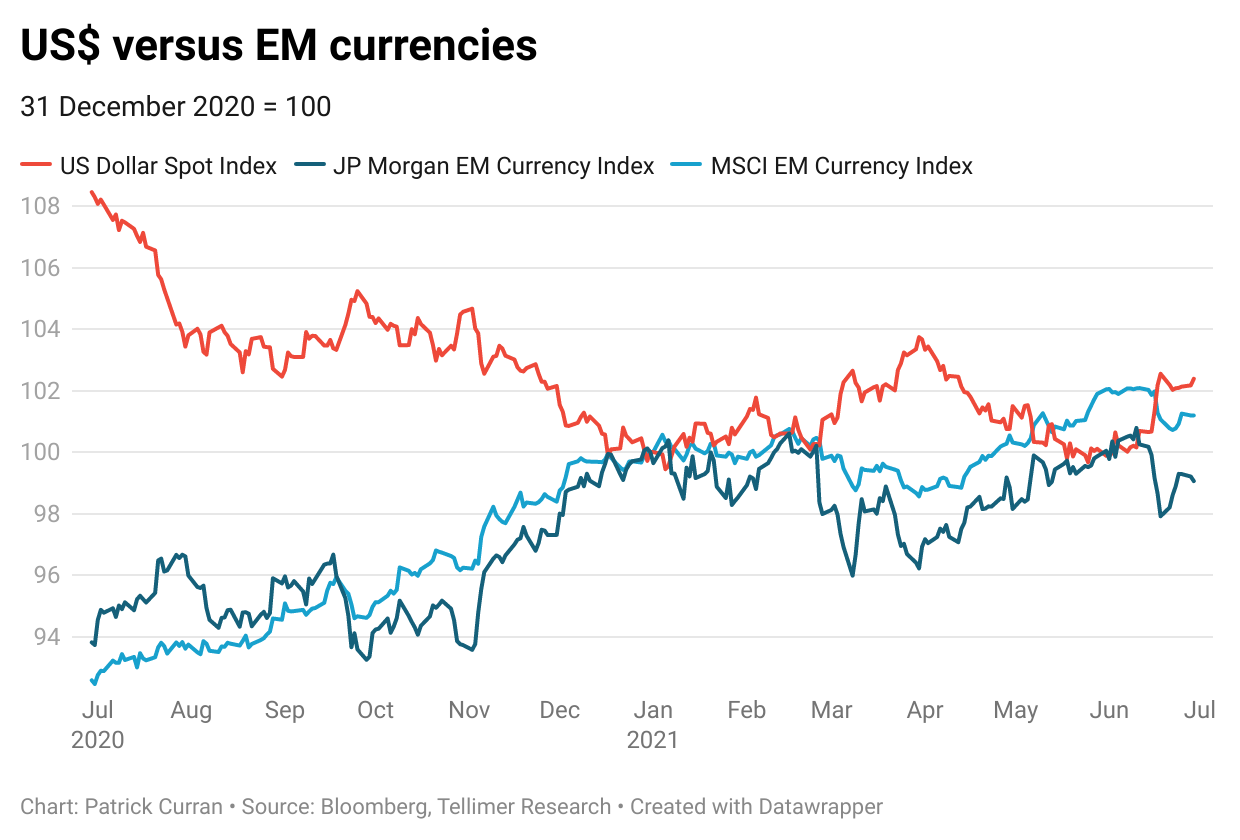 The impact on bond yields, however, was negligible. The 10y UST initially rose by 14bps but is now just 3bps higher since 10 June, while the 2y initially rose 12.5bps before settling c11bps higher, causing the yield curve to flatten somewhat as markets price a greater likelihood of rate hikes in the near term but still well-anchored inflation and rate expectations over the longer term. From a peak of nearly 1.75% in March, the 10y UST has steadily declined and is just 1.45% at the time of writing.

At the same time, EM credit has remained steady, with the JP Morgan EMBI spread rising just 5bps since 10 June. Notwithstanding some slight currency weakness, EM assets seemed to have weathered the fresh wave of taper tantrum concerns without much of an impact. 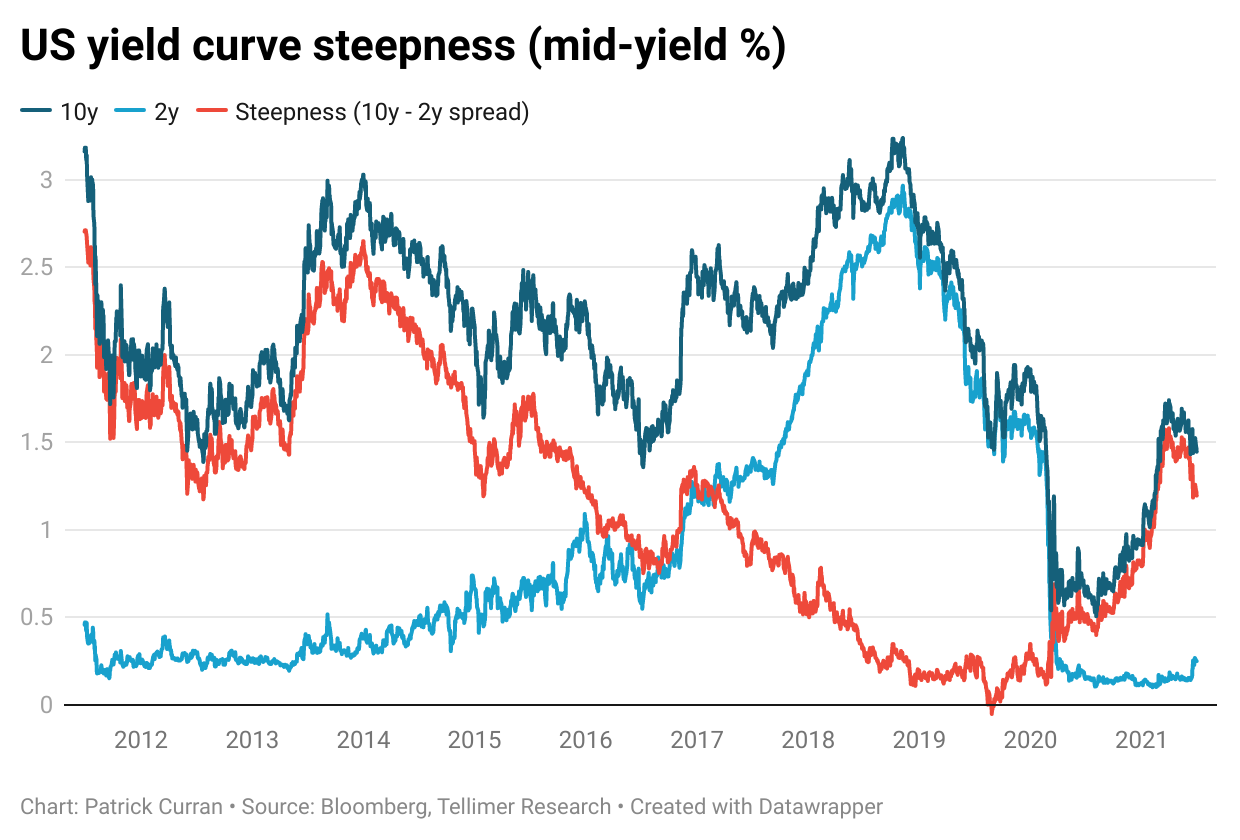 Limited supply has been a major force behind subdued UST yields, with the Treasury drawing down large cash balances in Q2 after heavy issuance in 2020 (net issuance from April to May was negative US$145bn once the Fed’s monthly purchases of US$80bn are factored out, bringing total net issuance this year to just US$15bn). But, with lower cash balances, issuance will likely have to be ramped up in H2, putting renewed upward pressure on yields. And, as my colleague James Huckle pointed out last week, yields in other developed markets like Germany have recovered to pre-Covid levels even as the 10y UST remains c50bps lower, and the 10y UST yield is likely to retrace above 2% and in the coming months (with a 12-month forecast of 2.37%).

Given the potential for renewed upward pressure on rates in the US, we have unpacked what rising rates could mean for EM currencies and debt, and have updated our taper tantrum scorecard to see which countries are most vulnerable.

We have previously argued that rising rates in the US are not necessarily bad for EM assets. The key question is whether rising rates are driven by higher inflation expectations (which should mean a weaker dollar) versus rising real rates (which should mean a stronger dollar). The IMF made a similar point in the April WEO, saying that an unexpected signal of higher future US policy rates that is not driven by changes in US economic conditions (eg a hawkish shift in the Fed’s reaction function) would lead to tighter financial conditions in EM but that US rate increases based on upside surprises to economic or vaccine data or inflation expectations should have a relatively benign impact on EM financial conditions.

Year-to-date, the 10y UST yield has risen by c55bps, driven to a slightly stronger degree by rising inflation expectations compared to rising real rate expectations. The 10y inflation-adjusted yield (a proxy for the expected real yield) has risen by 21bps (c40% of the total increase), while the 10y breakeven inflation rate (a proxy for inflation expectations) has risen by 34bps (c60% of the total increase). As such, real rates remain relatively well-anchored and are still firmly negative at a historically low -88bps, whereas in 2013 they rose sharply from around -1% to +1% in response to the taper tantrum. At the same time, 10y inflation expectations remain relatively well-anchored at just 2.33%, implying that the market agrees with the Fed that rising inflation will be transitory. 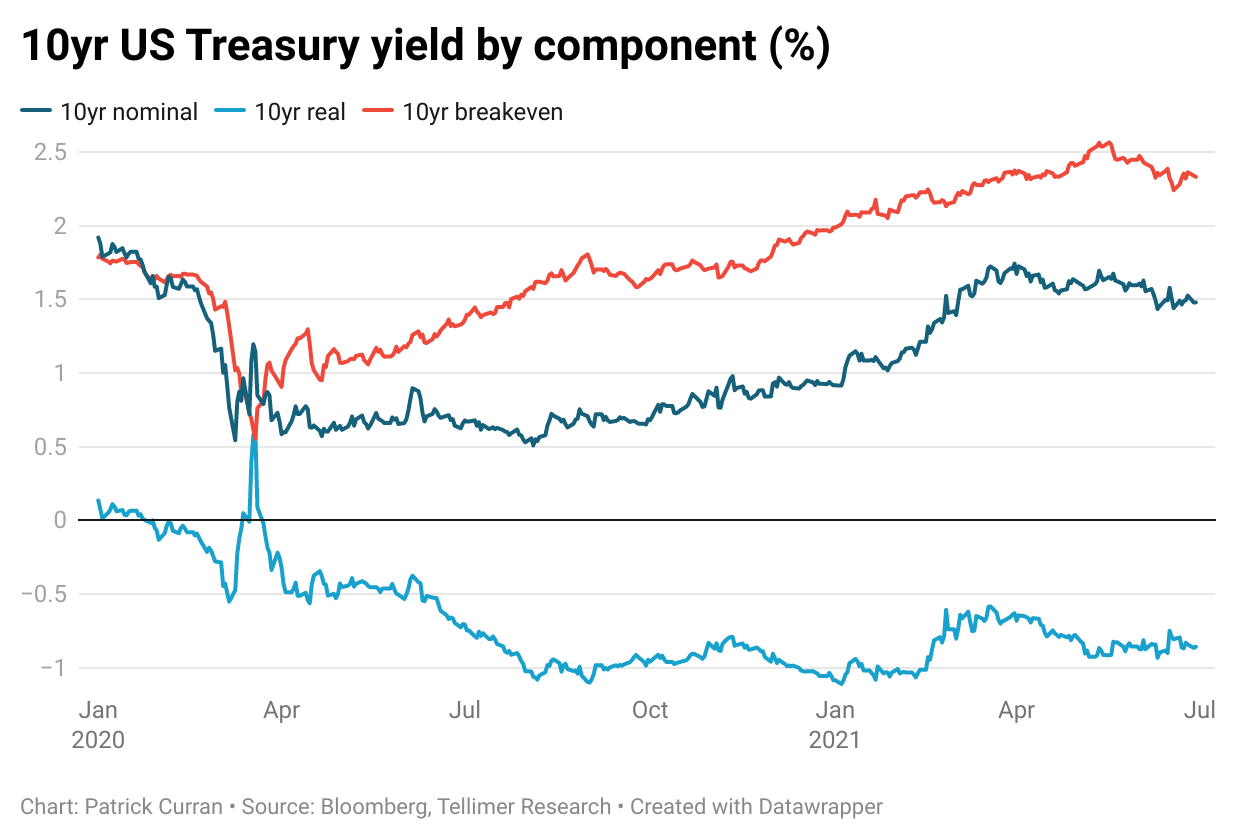 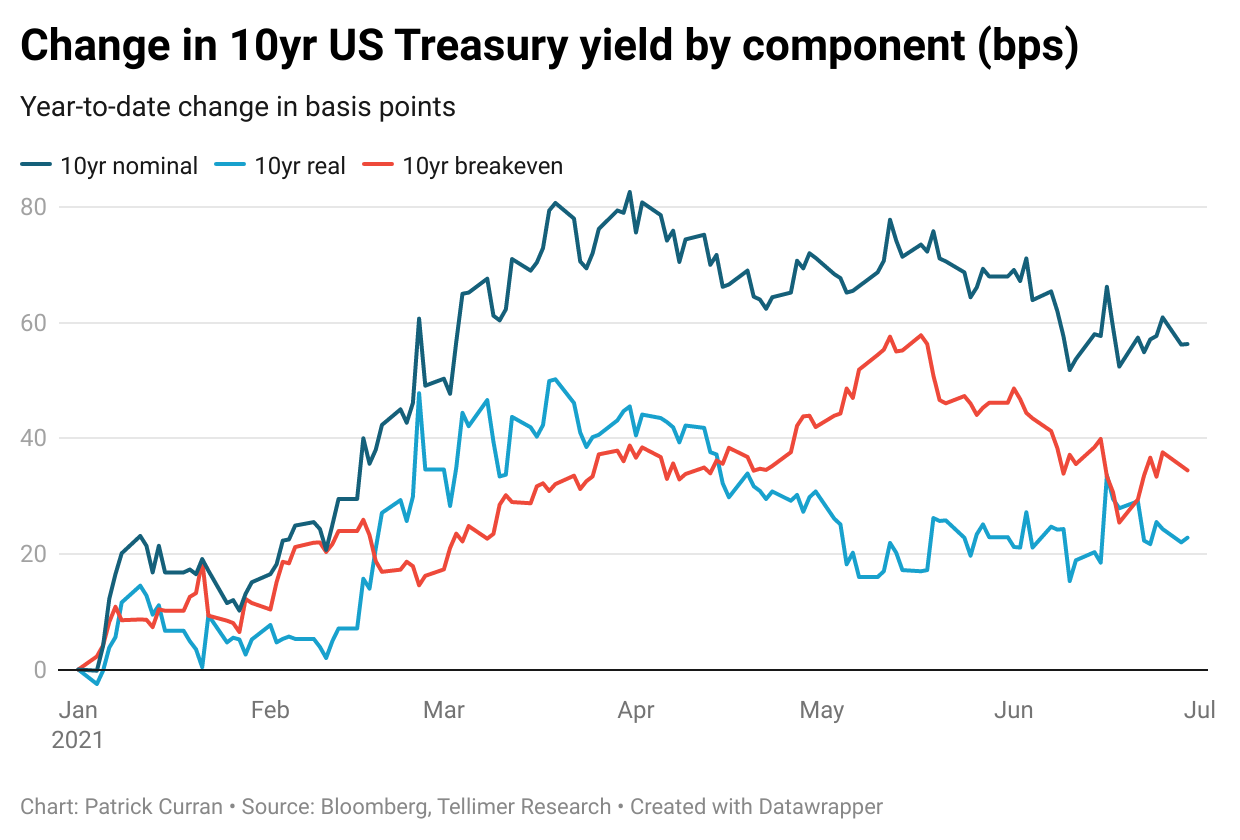 Looking beyond the Fed, EM inflation and monetary policy will clearly also be a driver of how EM assets respond to rising US rates. Inflation is also rising in EM, moving from a trough of 3.1% a year ago to 3.4% in December and 5.1% in May on average over our sample of 66 emerging and frontier markets. However, some EM central banks have started to respond with tighter policy, pushing the average policy rate up by c20bps since September (with hikes by Armenia, Belarus, Brazil, Georgia, Kyrgyzstan, Mexico, Russia, Tajikistan, Turkey, Ukraine and Zambia over that period). Mexico may best symbolise the challenge confronting EM central bankers right now, raising its policy rate last week, after having cut rates as recently as February. 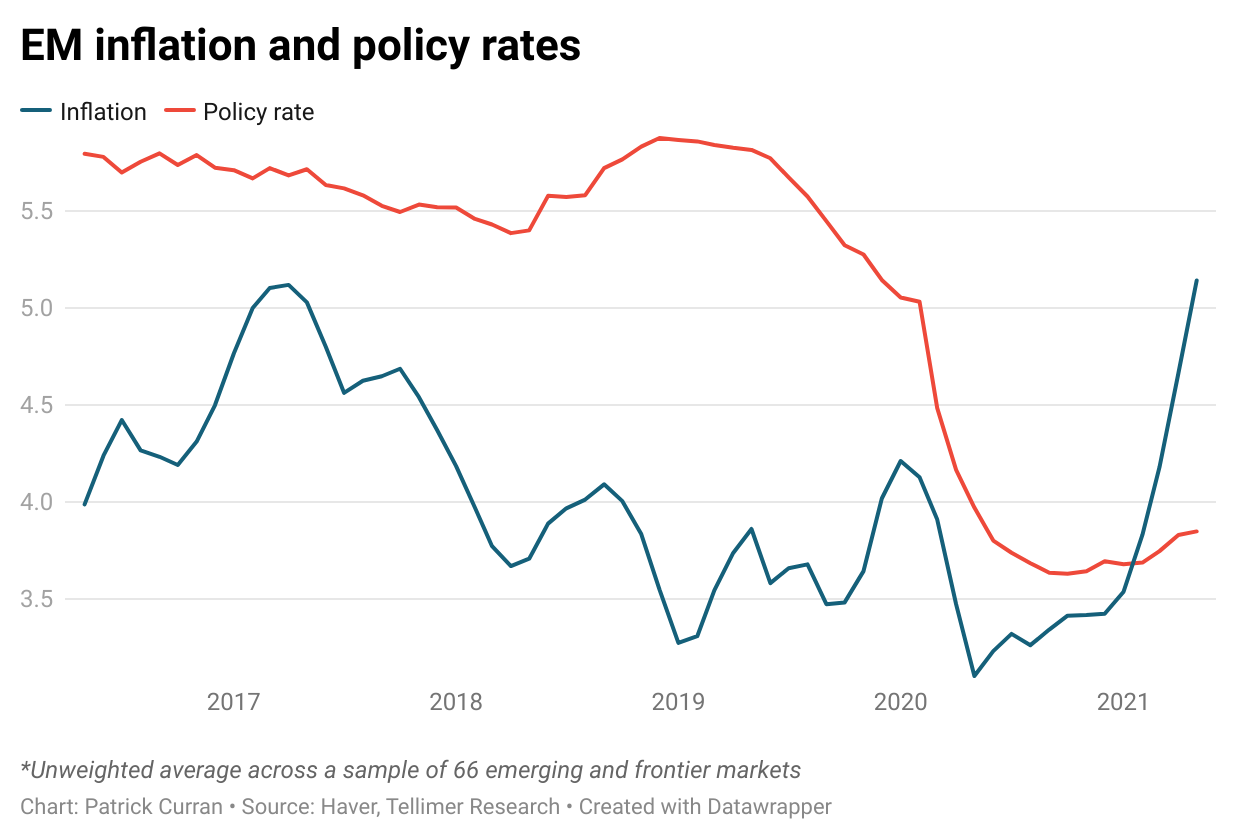 On balance, the average EM real policy rate fell below zero in March and reached a series low (dating back to 2012) of -0.8% in May. However, the drop in real rates has been even steeper in the US, with CPI spiking to 5% in May, pushing the real rate differential to 4.1% (down slightly from the series high of 4.6% in April). The rise in inflation is seen as transitory in the US and many EM, driven in large part by base effects, so it remains to be seen how the real rate differential will evolve. But as long as EM central banks do not fall behind the curve by failing to respond to rising real rates in the US or rising domestic inflation (if it proves not to be transitory) by raising rates, then rising rates in the US need not be concerning for EM currencies and debt. 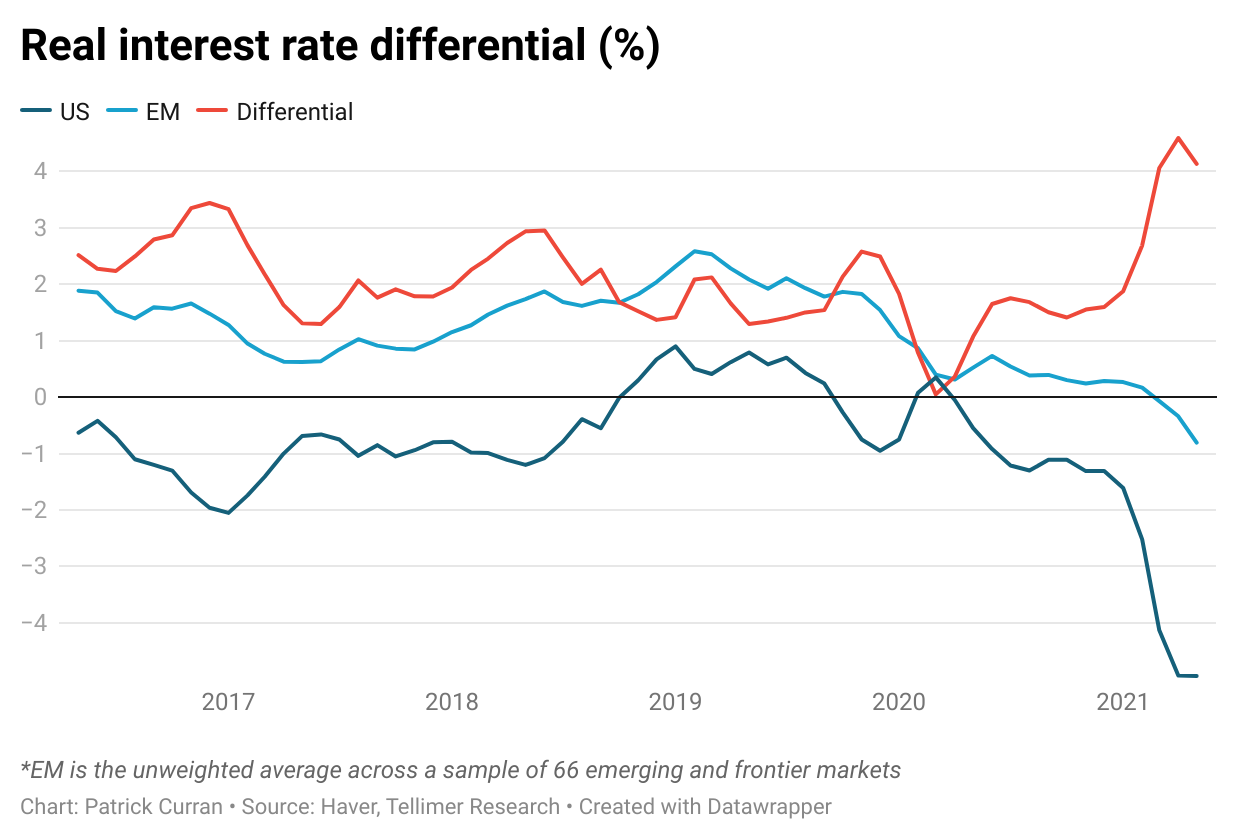 Our recent external liquidity and debt sustainability scorecards provide a starting point to see which EMs might be most vulnerable to rising global interest rates. We plot the scores for each of the 40 countries that have scores for both, which flags Sri Lanka, Tunisia, Jamaica, Bahrain, Kenya, Ethiopia, Egypt and Laos as being the most vulnerable. 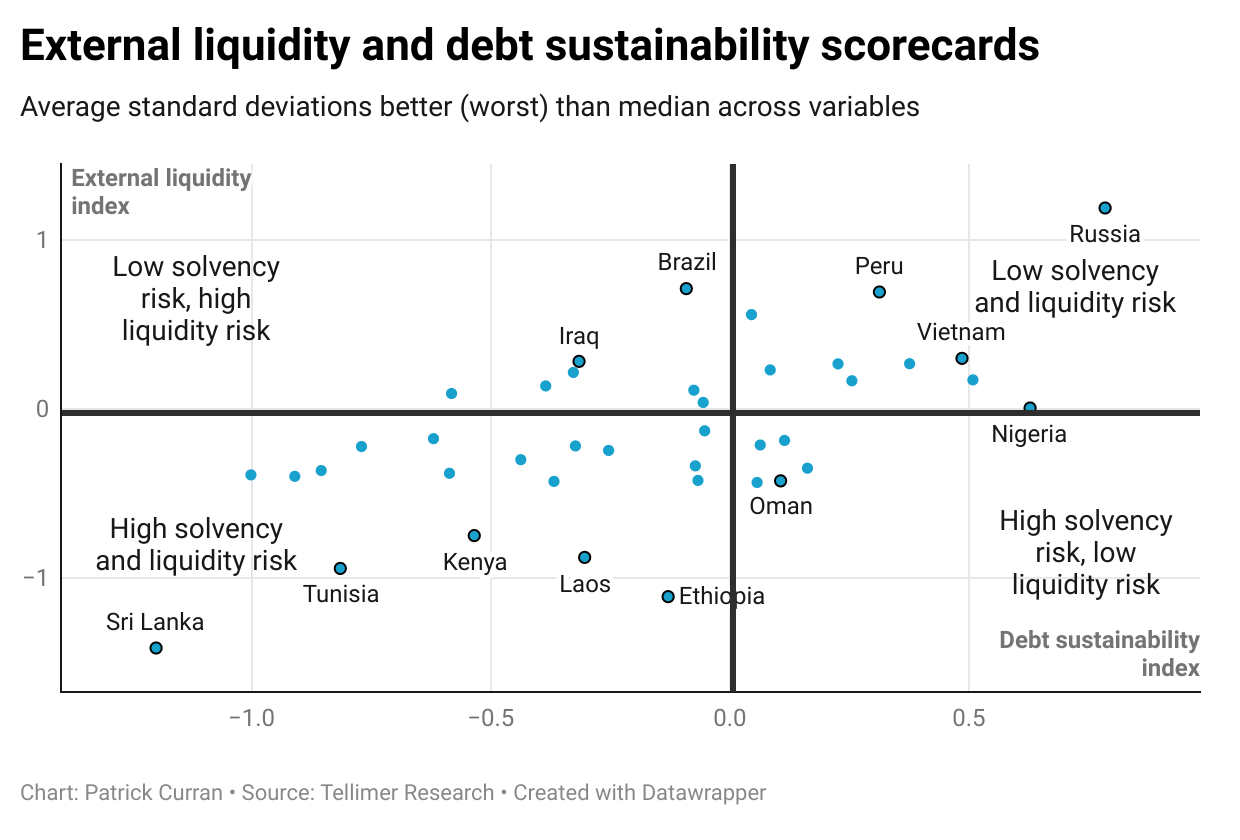 To drill down on vulnerability to rising US rates, we also update our taper tantrum scorecard, which flags countries as vulnerable if they have low FX reserves, large gross external financing requirements (a high current account deficit or external amortisations), a large stock of external debt (either FX-denominated or domestic debt held by non-residents), a lot of short-term external debt, low or negative interest rate differentials, and a high reliance on market financing.

There are some minor methodological changes relative to February’s scorecard. First, we adjust the current account by foreign direct investment (FDI) inflows – a measure called the basic balance – which more accurately reflects risk for countries with large deficits that are not primarily driven and financed by relatively sticky FDI flows. We also add an eighth variable looking at non-resident holdings of domestic government debt, for which data was previously insufficient but which we have subsequently populated for a large enough number of countries. Lastly, we add two countries (Bangladesh and the Philippines), bringing the total number of countries to 43.

As a result of the methodological changes, the results are not directly comparable to our February scorecard. That said, results are presented below, both in raw form and normalised in terms of standard deviations better (worse) than the median value (with the unweighted average as the composite score, presented only for countries with at least half of the indicators present): 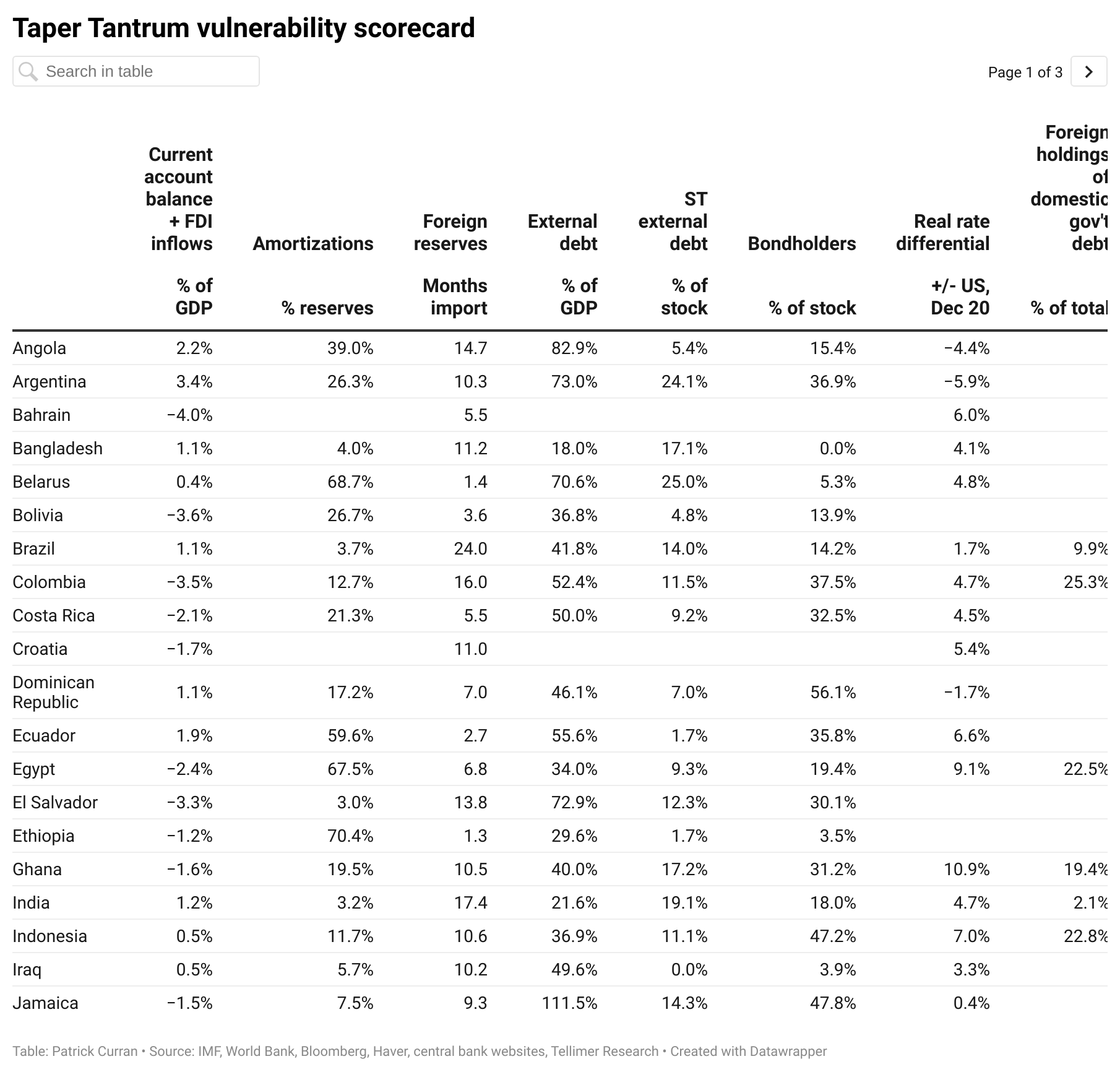 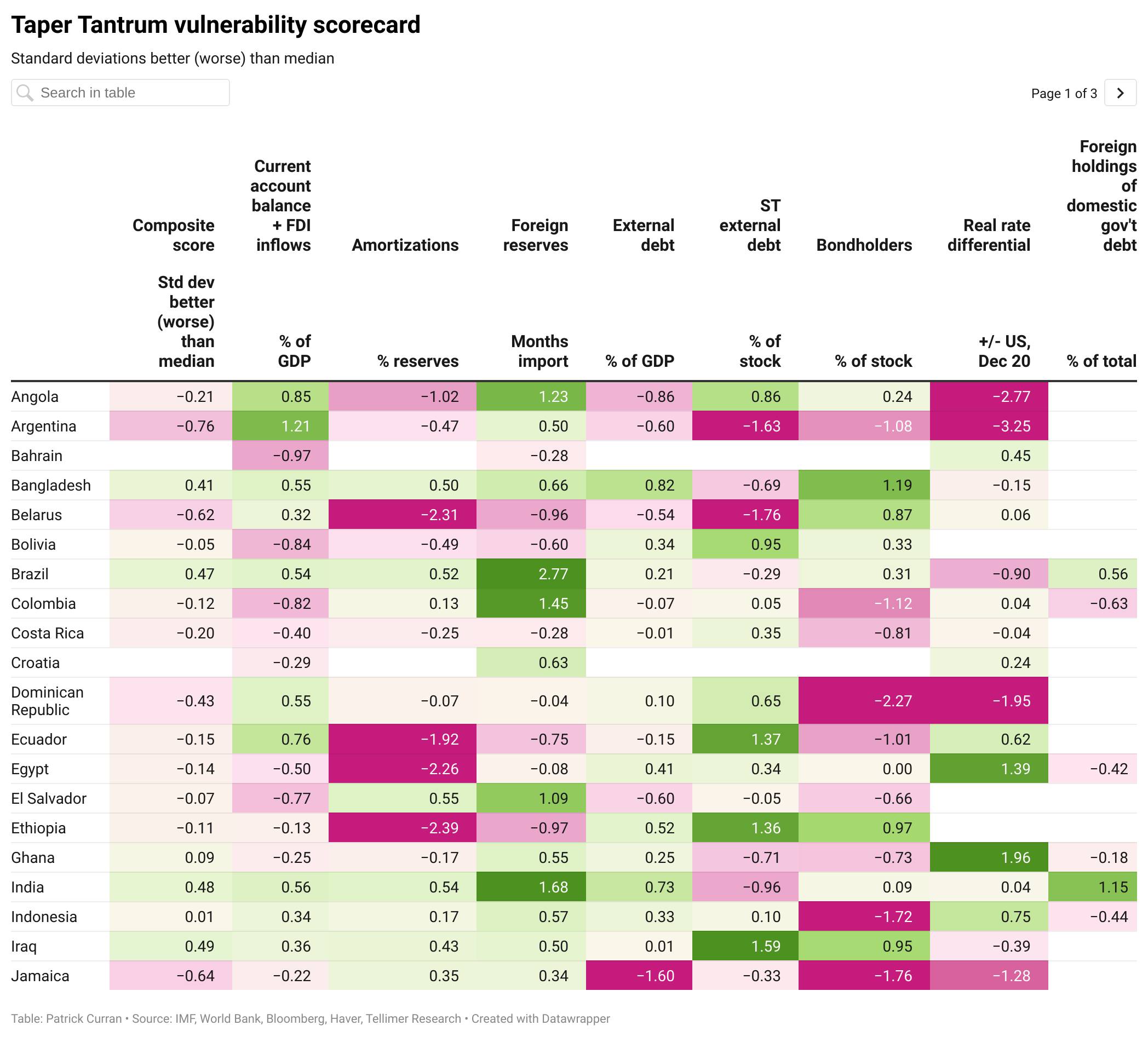 The 10 most vulnerable of the countries for which we have calculated a composite score are (in descending order): Tunisia, Mongolia, Argentina, Jamaica, Belarus, Laos, Sri Lanka, Dominican Republic, Turkey, Mexico, and South Africa (tied with Mexico in the 10th position). This is largely unchanged from the previous iteration of the index in February, with Argentina and South Africa entering the list of the 10 most vulnerable countries while Ecuador and Ethiopia dropped out after seeing their scores improve.

We do not think that an orderly period of rising rates in the US will necessarily derail EM currencies and debt, as long as markets do not begin to price in a more hawkish reaction function from the Fed and EM central banks do not fall behind the curve. But while emerging and frontier markets in general appear more resilient to a potential taper tantrum and EM assets have navigated both episodes of fear of rising US rates in February and June, US rates are likely to rise moving forward and could still negatively impact EM and FM perceived as having elevated vulnerabilities.

Our taper tantrum scorecard provides a framework to quantify those risks, and can be used to identify which countries are most vulnerable to rising rates. In general, a group of fragile frontier markets seem more exposed to a selloff, while larger EM seem to be better positioned. These countries must be carefully monitored as the Fed’s hiking cycle begins to unfold, be it next year or some date beyond.