So much of the USD's retreat has to do with the return of some certainty. Now that the Fed's path is clear, investors can assess with greater clarity how growth cycles might unfold, and it helps reduce overall levels of risk aversion. A quick look at the VIX (fear gauge) shows that it is trading near the lower levels of its recent trading ranges. Stock markets have rallied to fresh record levels, fiscal outlooks have improved courtesy of the improved tax revenues, and overall central banks collectively sound more upbeat about economic prospects. Add to that, the dip in the middle to longer-term bond yields across the US yield curve detract from the USD's overall attraction, and investors are positioning for an economy that will grow but drag the US trade deficit wider with it. No longer is the USD needed as a safe haven, and higher yields can therefore be attained elsewhere.

In the commodity market, copper finished higher yesterday however the bullish tone has faded in the Asian session as traders book profits. Fundamentals are still strongly supportive of the red metal as the $1trn spending package gets passed in the US, China shows strong export numbers and copper inventory levels look on course to post 2008 lows in the coming days which runs the risk of a front end squeeze.

Tanzania: Energy Minister January Makamba yesterday said that Tanzania is confident that the final decision investment on the $30bn LNG project will come "sooner than is traditionally the case." Recall Tanzania has held talks with Shell to revive the long-delayed LNG terminal. Oil majors including Shell, Exxon, and Equinor want to build a two-train onshore LNG plant to tap into Tanzania’s massive offshore gas reserves.

Democratic Republic of Congo: The International Monetary Fund (IMF) yesterday announced a staff-level agreement with the Democratic Republic of Congo for a three-year $1.1bn extended facility to maintain macroeconomic stability and support the economic recovery from the adverse impact of the pandemic. Furthermore, the IMF forecast the DRC's economy to expand by 2.4% in 2022, underpinned by "higher oil prices, a rebound in oil production, a vaccine rollout, social spending, domestic arrears repayments, and expansion of agriculture, mining, and services." The IMF warned that the outlook remains uncertain amid risks of new waves of the pandemic and volatile oil prices.

Egypt: Egypt's economy is forecast to expand by 5.4% during the fiscal year 2021/22 from 3.3% in the 2020/21 FY, according to the latest Arab Monetary Fund's Arab Economic Outlook report. The report projects Egypt's economic growth to continue its robust pace despite the coronavirus pandemic. According to the report, "Egypt was an exceptional model globally to attain a positive growth in 2020, amid the first wave of the pandemic, at 3.6% despite the negative implications of the crisis." The report attributed this performance to the country's continuous economic reforms that boosted the economy's flexibility and resilience towards shocks, in addition to the incentives packages that Egypt has adopted with the objective of rejuvenating local demand.

Kenya: The Central Bank of Kenya (CBK) has suspended for one year a move to blacklist borrowers with non-performing loans of less than KES 5mn at the start of October to help small and medium-sized businesses. The suspension is one of a series of measures that President Uhuru Kenyatta announced on October 20 to boost the economy as it recovers from the effects of COVID-19. According to the CBK, "the suspension is therefore targeted to rope in the MSMEs (Micro, Small and Medium Enterprises) and for a specified duration that will provide space to turn around their businesses." The bank further said that the measure would stay in place until September 30, 2022.

Tanzania: In a bid to crackdown on losses, the central bank is targeting lenders' employees deemed responsible for approving non-performing loans. According to a statement by central bank governor Florens Luoga, an employee who issued loans fraudulently or without following due procedures will face legal action. The central bank will "blacklist the concerned employees and bar them from being employed in any bank or financial institution operating in Tanzania." While the ratio of non-performing loans in Tanzania fell to 9.42% in 2020 from 9.58% in 2019, it remains above the central bank's target of 5%.

Ivory Coast: Finance Minister Patrick Achi said that the country scrapped a plan to sell debt on the international market this year because Treasury no longer needed the additional funds. Achi added that the country will monitor the Treasury in the first months of 2022, and the finance minister will then decide if the country needs to issue a Eurobond. Had the sale occurred, it would have been the country's third sale in less than a year.

South Africa: A softer USD also means that commodity prices will rise and bolster SA's terms of trade. They had been slipping recently, and the retreat in the USD has bolstered their performance to boost the overall performance of commodity currencies. Therefore, the ZAR is in the sweet spot and will enjoy ongoing support for the time being. Technically speaking, the ZAR could still appreciate further and potentially force more stale USD long positions to liquidate.

The South African Rand (ZAR) strengthened for a fourth straight session against the USD yesterday, its longest streak in three weeks, amid risk-on sentiment following a more dovish tone from global central banks. However,  it is worth noting that volatility levels are rising ahead of this week’s medium-term budget. For context, the one-week USD-ZAR implied volatility recorded its biggest daily change in two months to end the day just shy of 15.00%. The uptick in volatility suggests that options traders are increasingly becoming concerned and opting for protection against any further sharp swings for the USD-ZAR. 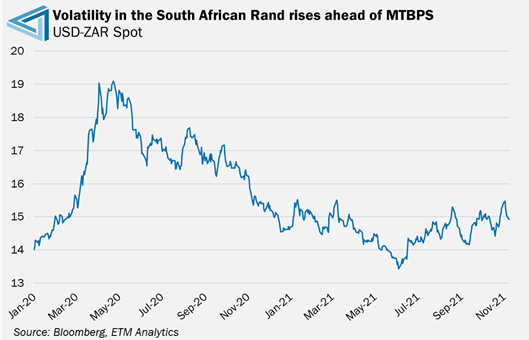 On Thursday, Finance Minister Enoch Godongwana’s maiden medium-term budget policy statement holds plenty of two-way directional risk for the ZAR. At face value, the Finance Minister will be able to paint a picture of fiscal improvement, especially on the revenue side. However, the continued increase of SA’s debt pile remains a significant concern. Signs of budget constraint have been few and far between, meaning the bias to SA’s sovereign rating outlook is to the downside over the medium term, notwithstanding expected short-term improvements.

With risks existing that the budget on Thursday could generate significant volatility, we expect the 1-week implied volatility tenor to continue to rise as traders seek protection from sharp swings in the USD-ZAR.

Fiscal risks in Ethiopia have intensified in recent months, with debt servicing costs rising markedly on the back of international backlash surrounding the conflict in Tigray and continued push from the government to restructure its debt. Adding salt to injury, the US has signalled that it intends to remove Ethiopia from the US African Growth and Opportunity Act due to human rights violations. Ethiopia also recently declared a six-month state of emergency after forces from Tigray said they were gaining territory. 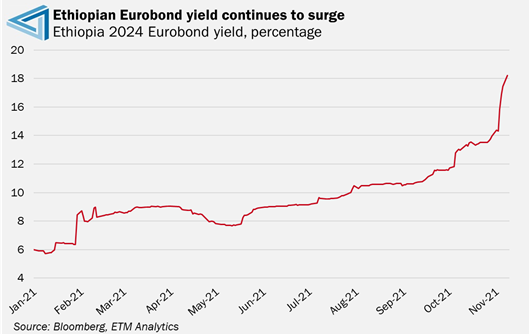 Ethiopia’s 2024 Eurobond, its only international issue, has come under significant selling pressure in recent weeks on the back of the marked deterioration in investor sentiment. Specifically, the 2024 Eurobond yield has doubled since June, climbing more than 900bps to 18.22%, according to Bloomberg data. The marked spike in Ethiopian bond yields has resulted in a spike in debt servicing costs. The Finance Ministry flagged in a report published on Monday that Ethiopia’s external debt servicing cost is expected to reach $3.2bn in the financial year 2024-25, up from $1.9bn in 2021-22, due to maturing sovereign bonds.

The Finance Ministry added that Ethiopia’s foreign debt increased to $29.5bn at the end of June, marking a 2% increase from the previous year. Domestic debt increased by 22% to ETB 1.1trn in 2020-21 from a year earlier. A breakdown of the debt shows that multilateral agencies and bilateral creditors held 51% and 29% of total debt, respectively. Private creditors meanwhile held the rest, equivalent to $6.1bn. This includes Eurobond holders, commercial banks and suppliers. According to the report, Chinese lenders account for 30% of the total external public debt. The Ministry noted in its report that external debt as a percentage of exports stood at 242%, missing the 180% target, adding that this ratio is over the threshold for Ethiopia, which puts country’s debt distress level at high risk. Going forward, we continue to advise caution when investing in Ethiopian assets, given all the political and fiscal uncertainty.

Macroeconomic: Uganda’s external debt costs surge on the back of Chinese loans

While Uganda remains in a relatively good fiscal position relative to many of its African counterparts, it is worth highlighting that the East African nation’s external debt servicing costs rose by more than half in the 2020/21 fiscal year. Payments on project loans from China drove the marked increase in external debt servicing costs. According to a report published by the Finance Ministry, Uganda’s foreign debt expenses increased by 55% to $436bmn in the fiscal year through to June.

The Finance Ministry said that this was on account of increased principal and interest payments for major flagship projects, which include Karuma and Isimna power plants. Note that both the 600-megawatt Karuma plant, Uganda’s largest hydropower project whose completion was delayed until June 2022, and the 183-megawatt Isimba station were financed by loans from China.

The Finance Ministry said that government debt increased by almost 28% to $19.5bn at the end of June. This is equivalent to 46.7% of GDP and marks a notable increase from the 41.1% of GDP seen at the end of the previous fiscal year. The Ministry noted that around 63% of all outstanding debt is owed to external creditors. Note that the majority of the external debt is owed to multilateral creditors, such as the World Bank and the African Development Bank. China is Uganda’s biggest bilateral creditor, according to the Ministry. Going forward, while Uganda’s debt pile has risen, risks of the country slipping into a position of fiscal distress remain muted. Therefore, we still assess Uganda to be a solid investment destination.