Tanking South African rand drags down regional peers with it

Fixed income: US Treasury yields continued to fall yesterday, driven by a cooling of the Fed’s preferred inflation measure in October. The markets are now pricing in a more than 80% probability that the Fed will hike by 50bp in December. The market-implied terminal rate is now priced at 4.874%, with this to be reached in May of next year before the Fed is expected to start cutting rates. The gains for bonds yesterday come just before this week’s main labour data, and any softening of the NFP figures could keep the bullish momentum for bonds going into the weekend. We are also nearing the start of the FOMC blackout period ahead of the December meeting, which will take away some drivers of the market and potentially leave the bullish bias intact. Bunds also rallied yesterday, having their best session in two weeks as the weaker-than-expected US data also saw traders pare back some ECB tightening bets. The ECB Deposit rate is now priced to peak at 2.88% by June, its lowest peak for over a month.

Commodities: Oil prices are set for their best weekly gain since September as steps to reduce COVID restrictions in China supported the market. A plunging dollar has also continued to prop up oil prices, with the Dollar Index sliding to its lowest since August overnight. As a result, Brent crude prices are currently above $87 per barrel, up more than 4% from last Friday’s close. WTI, meanwhile, has climbed back above $80 per barrel, with the US looking to end the sales from its emergency reserves and start restocking them.

South Africa: In the words of King Charles, oh dear, oh dear. Will he or won’t he? That is the main question on everyone’s minds. Will Cyril Ramaphosa follow the step-aside rule that he used so artfully within the ANC to rid himself of corrupt cadres stifling his reforms, or will he fight to remain in power and reward those that supported him in the past few years with some resilience? What was supposed to be an announcement last night was postponed to today. It is unclear how to interpret this. If reports that he was willing to step aside were accurate and that he wanted to lead by example, then the path of righteous decision-making was clear.

He openly indicated that he would be willing to step aside if he lost the ANC’s support and was asked to. However, the markets reminded the ANC top brass what was at stake. Without anything announced and rumours swirling, the ZAR collapsed and lost almost 80c/dlr in one trading session. It is a colossal move even for the ZAR and highlights the degree of negative perception it would generate. As if the ANC has not lost enough support, now they would face the indignancy of recalling their third successive president before their full term in office was completed. Not only does it highlight just how corrupt and fragmented the ANC really is, but it also raises serious questions about the ANC’s tenure as it rapidly loses relevance and support. Already, there is speculation of coalition politics as the most likely outcome of the next general elections.

Zambia: The Zambian government is finalizing the guidelines on the issuance of green bonds. Secretary to Treasury Felix Nkulukusa said in a statement that the finalization of regulations would create credible opportunities for raising funding through green bonds for climate change projects and green growth. As part of the provisions, the interest income earned on green bonds with at least three-year maturity will be exempt from withholding tax.

Namibia: The deadline for submitting proposals for leasing green scheme irrigation projects has been extended to December 16, according to a statement from the Ministry of Agriculture, Water, and Land Reform. The ministry is currently running a bidding process to lease out three green scheme irrigation projects: the Uvungu Hvungu project, the Ndonga Linena project, and the orange River project. The ministry's Executive Director, Ndiyakupi Nghituwamata, says there is no exact date when the successful bidders will be announced, but it would likely be early next year.

Egypt: According to Ayman Soliman, the CEO of Egypt’s sovereign fund intends to award contracts for the construction of 21 water desalination facilities in the first phase of a $3 billion program for renewable energy. Egypt, which recently hosted the COP27 UN climate talks, aims to increase investment in renewables and the production of green hydrogen projects expected in 2025-2026. In the first phase of its water desalination program, the government hopes to produce 3.3 million cubic meters of desalinated water per day and, eventually, 8.8 million. It is worth noting that more than 200 developers from at least 35 different nations have expressed interest in the first phase.

Nigeria: Nigeria’s LNG supplies will likely remain tight for a little longer as some companies struggle to operate normally after the October floods. Speaking at the sidelines of the World LNG summit, the CEO of Nigeria Liquified Natural Gas  (LNG), Philip Mshelbila, stated that the company is struggling to return to normal production levels after declaring a force majeure following the floods that hit the country in October. While water levels are receding, the pace is very slow than what was anticipated, and also, one of the companies’ key suppliers still has a significant number of assets submerged. The delay in returning to normal gas supplies could continue to curtail global gas supplies.

Angola: Angola’s oil regulator, National Agency for Petroleum, Gas and Biofuels, is working with Exxon Mobil Corp, which won the right to exploit oil fields offshore, to make exploring for the fuel more attractive after technological challenges delayed the project. With frontier exploration regarded as inherently very risky and with a low chance of success, attracting investors has been a challenge, hence the delay in starting the project. A study commissioned by the regulator recommended the need to grant more generous fiscal and contract terms for investors looking for oil in frontier areas.

The focus in the African FX market on Thursday was centred on the South African rand as the currency tanked on the back of mounting political concerns. The ZAR lost an eye-watering -3.55% against the USD yesterday and as much as -5.83% during intraday trade, making it the worst-performing African currency. The sharp sell-off in the ZAR came on the back of renewed political uncertainty relating to the country’s president.

The ZAR dragged down its Southern African peers as contagion spread across the region. The likes of the Botswanan pula and the Zambian kwacha shed -1.54% and -0.34 against the USD yesterday, making the ZAR, BWP and the ZMW the clear laggards. 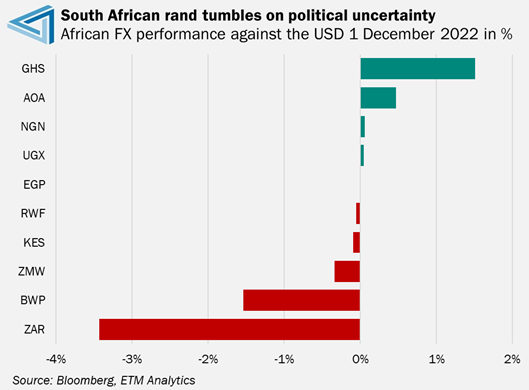 Looking at the ZAR crosses, the BWP strengthened by 1.96% against the USD, with the BWP/ZAR closing the session at 1.3602, while the ZMW gained a more pronounced 3.17% against the ZAR with the ZAR/ZMW closing the day at 0.9729, according to Bloomberg data.

While Southern African currencies tanked on Thursday, it is worth noting that the Ghanaian cedi recorded a meaningful gain as currency bulls honed in on the supersized rate hike and growing optimism that the country will secure a deal with the International Monetary Fund. For context, the GHS gained an impressive 1.51% against the USD and a staggering 5.12% against the wounded ZAR.

Fixed Income: Bank of Botswana leaves rates on hold amid expectations for inflation to slow

It was the turn of the Bank of Botswana to deliver its rate verdict on Thursday. In line with expectations, the Bank of Botswana’s Monetary Policy Committee voted in favour of leaving its benchmark Monetary Policy Rate (MoPR) on hold at 2.65%. The decision to leave rates on hold comes on the back of expectations for inflation to decelerate in the medium term due to the dissipating impact of the earlier increases in administered prices (base effects), subdued domestic demand, current monetary policy posture, expected decrease in global inflation and international commodity prices. 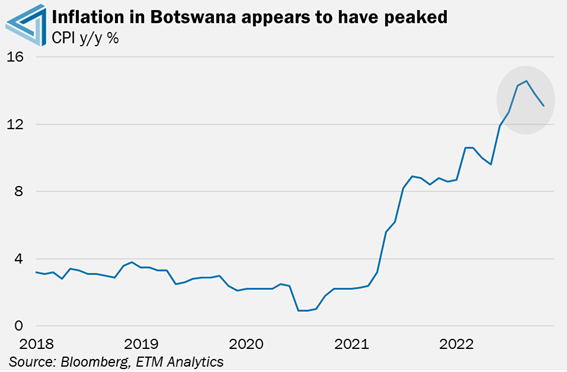 That said, the Committee said in its policy statement that there is a “significant risk that inflation could remain elevated owing to the potential increase in international commodity prices beyond current forecasts; persistence of supply and logistical constraints to production; the adverse economic and price effects of the ongoing Russia-Ukraine war; and the uncertain COVID-19 profile.” The main upside risks to inflation are possible adjustment of administered prices and upward pressure on wages from the increase in public sector salaries.

On the contrary, the central bank highlighted that there are also significant risks that inflation surprises to the downside in the months ahead due to the possibility of weaker-than-expected domestic and global economic activity and a correction lower in international commodity prices. Speaking of growth, Botswana’s economy is expected to grow by 3.2% in 2022 and 2.7% in 2023. While there is a real risk that the central bank can raise rates in the months ahead, it is worth noting that Botswanan bond yields appear to have peaked for now and have pulled back from the peaks recorded at the end of October.

The start of the new month brought with it the latest economy-wide PMI data for Nigeria. The high-frequency PMI data implies that economic conditions in Nigeria improved markedly during November, with the headline number rising to 54.3 from 53.6 in October. S&P Global said in the report that new business increased at the fastest pace in six months amid reports of more robust demand and higher customer numbers. 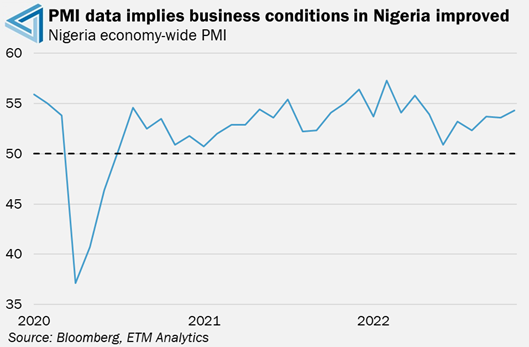 S&P said that companies responded to rising demand by increasing their business activity accordingly, with output rising in each of the past five months. S&P added that there were notable increases in business activity across all four sectors covered by the survey. Against the backdrop of improved business conditions, companies increased their staffing levels at the fastest pace in 3 months.

While it is encouraging to see the marked improvement in business conditions in Nigeria, even as oil production in the country continues to tank, price pressures continued to intensify in November. The sustained sell-off in the Nigeria naira continued to push up input costs, which were once again passed on to consumers. Moreover, it is worth noting that despite the improvement in business conditions in November, business confidence declined for a fourth straight month to the lowest level since the survey began in 2014.