The sharp EM credit sell-off has continued, with the Bloomberg EM Sovereign Aggregate Index spread widening by over 150bps since 5 April and 100bps since 6 June, after a brief late-May rally.

The sell-off comes amid persistently high inflation, which has prompted a tightening of global financial conditions as markets price in a more hawkish policy response from major central banks like the Fed. We flagged the latter as a risk to EM assets in April amid relatively dovish market pricing of the Fed hiking cycle and the surprising resilience of EM spreads over the first four months of the year, despite a series of shocks. 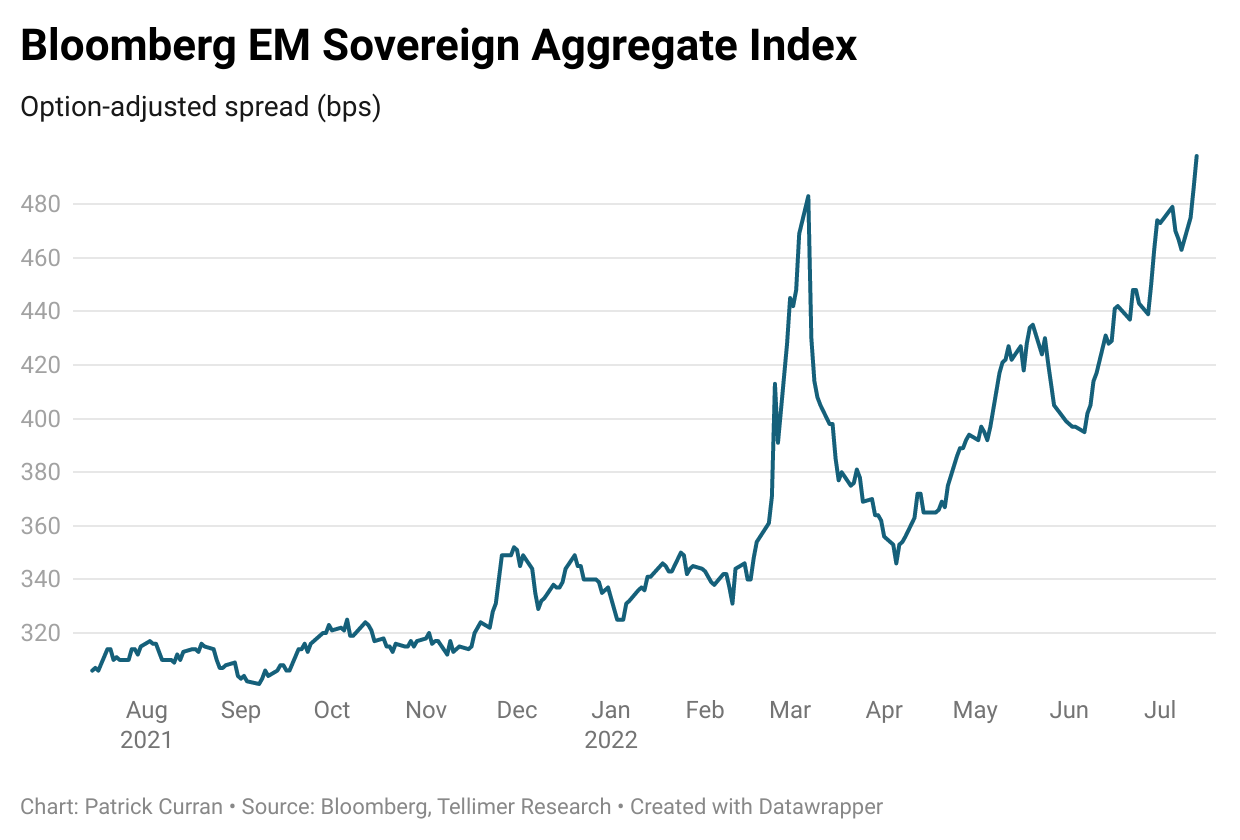 The ongoing sell-off takes the total spread increase to 160bps YTD through 13 July, with spreads now exceeding their post-Russia/Ukraine invasion peak and sitting 135bps above the 2019 average and 215bps above their post-Covid low.

As before, the widening has been driven by higher-yielding names, with the high-yield sub-index rising by 335bps YTD to 930bps and the investment grade index widening by 45bps YTD to 150bps. This, however, has resulted in similar total returns of -22.3% for high yield and -20.3% for investment grade so far on the year (see below for a country-by-country performance summary). 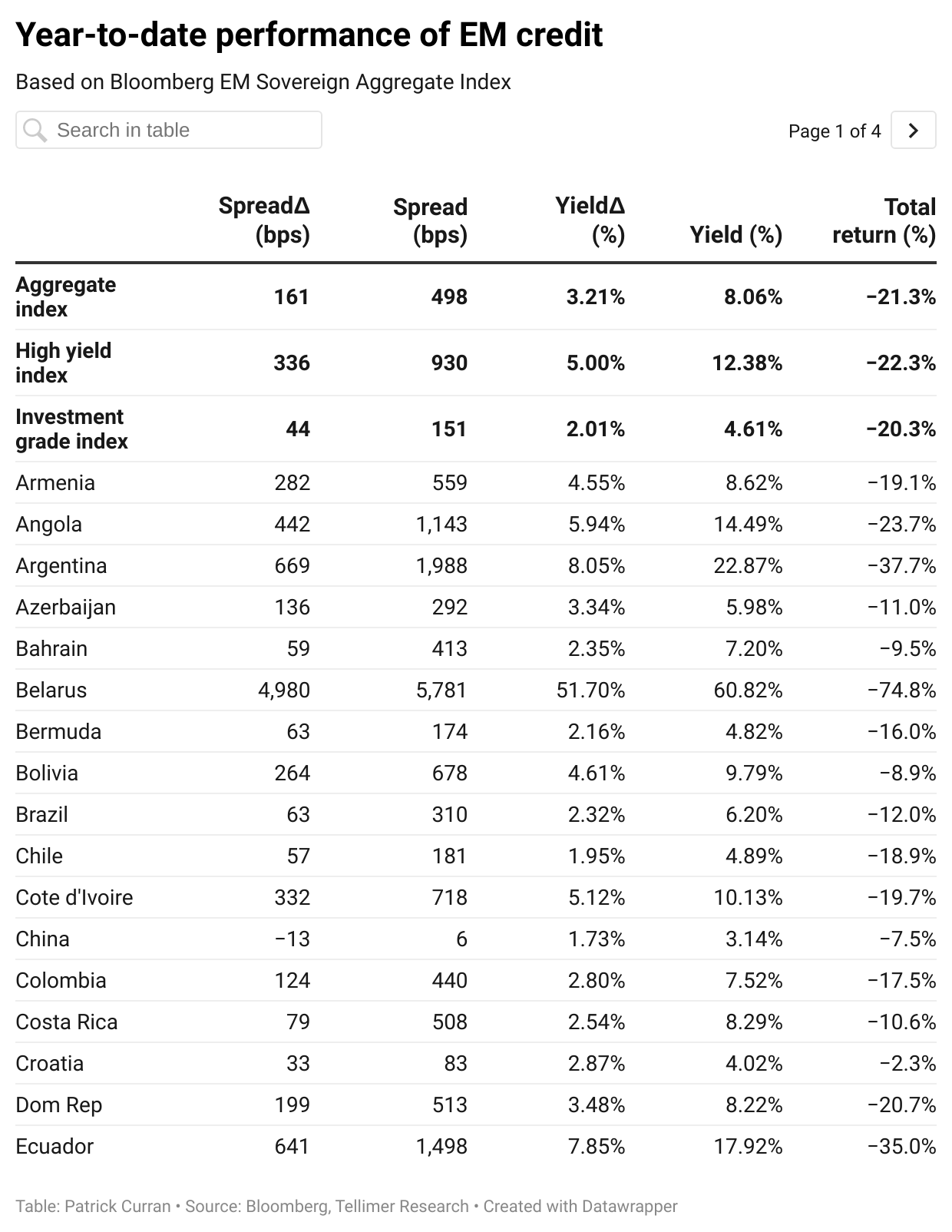 Running a simple regression of the YTD change in spreads versus the spread level at the end of 2021 (exuding Belarus, Ukraine and Lebanon), we find that each 100bps difference in spreads at the of 2021 has led to an 82bps difference in performance YTD (r2 = 72%, confidence interval = 99%). 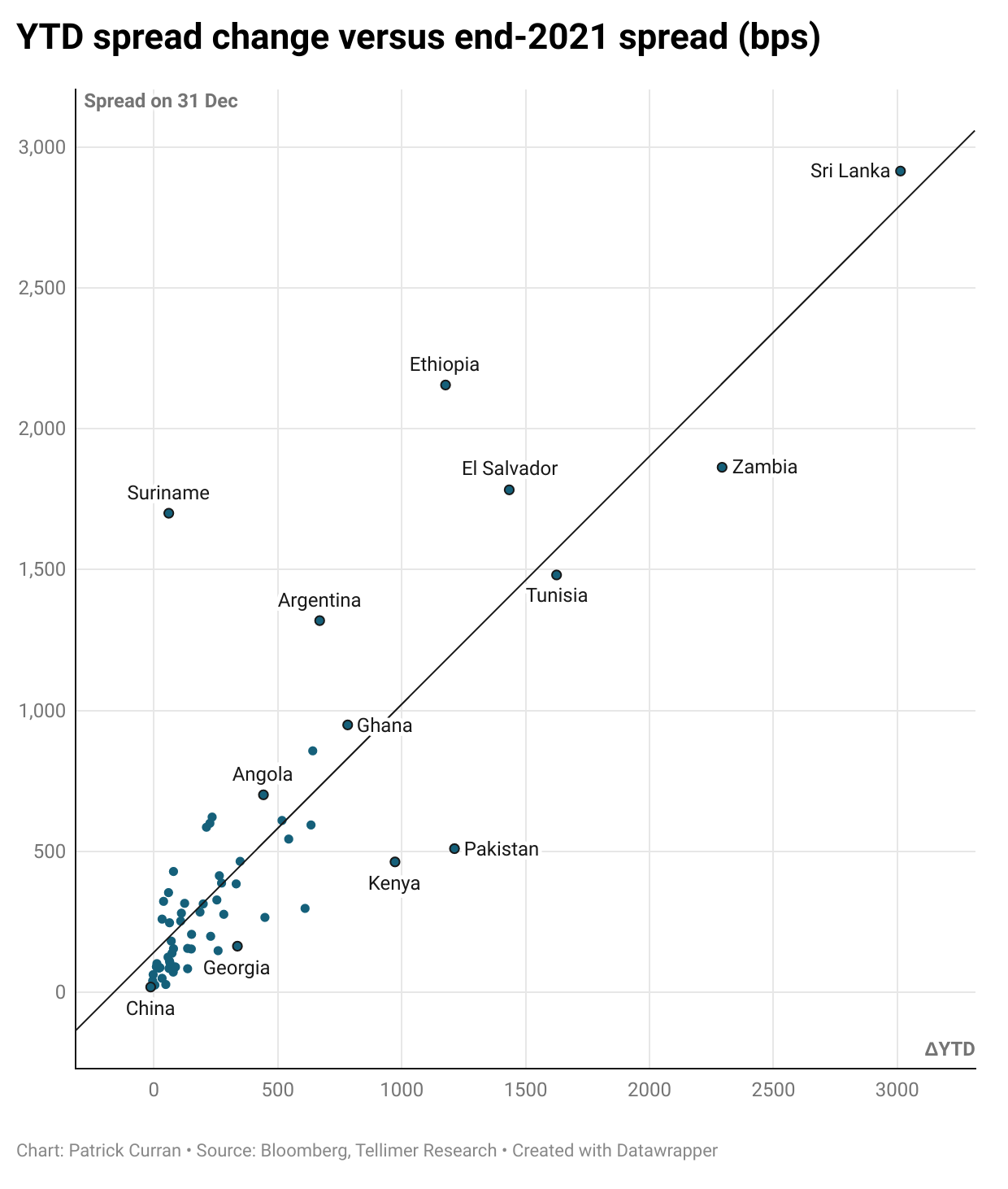 Moving forward, the question is whether more pain is in store for EM assets or if we are nearing the bottom. We have previously said that the sell-off has unlocked some pockets of value in the higher-yielding/frontier segment of the market, with 25 countries (38% of the index) now yielding >10% and 18 countries (27% of the index) with spreads >1000bps (including countries in distress), typically seen as a sign of distress.

Indeed, there are now a handful of countries whose 10-year equivalent US$ bond prices have dropped into the 50s and 60s, even though they are still servicing their debt, including Egypt, Ghana, Kenya, Nigeria and Pakistan, among others. While this might put a floor under bond prices in a more 'normal' environment, the floor may have been lowered given the global rise in yields and countries like Sri Lanka (defaulted) and Argentina (performing) trading in the low 20s.

Further, there are seemingly few investors willing to catch the falling knife in an environment characterised by elevated uncertainty and volatility. This could be exacerbated by positioning if investors had already put most of their cash to work before the sell-off and/or on the way down, which may mean that things have to get worse before they get better, even for countries that otherwise appear to offer a compelling value proposition.

We wrote earlier in the week that more pain could be in store for EM credit (echoing our views from last month) until global inflation shows signs of peaking, as the Fed’s reaction function to a recession is unlikely to be a reversal of its hiking cycle as long as inflation remains stubbornly high and unemployment remains historically low. With recession fears on the rise in many developed markets, this would expose EM to a double-whammy of lower global growth and tighter financial conditions.

There may very well need to be an improvement in overall risk sentiment before those pockets of value translate to actual price gains. Further, countries with large gross external financing needs that are currently locked out of the market will struggle to avoid a balance of payments/debt crisis if global financial conditions continue to tighten, which could push some countries into default (we think Pakistan and Tunisia are most vulnerable, followed by Egypt, El Salvador, Ethiopia, Ghana and Kenya, in no particular order).

All said, the second half of the year is likely to be another volatile one for EM credit investors, but, after years of suppressed spreads, the ongoing sell-off has finally created some value in the asset class for those who are brave enough to stick their necks out.