We set out our thoughts on Tajikistan following our virtual discussions with the IMF team during the recent IMF/World Bank Spring Meetings. We would like to thank IMF staff for their time. The views we set out here are our own. We upgrade the TAJIKI 7.125% 2027 bond to Buy from Hold with a yield of 16.0% (price US$74.2) on a mid-price basis as of cob 29 April on Bloomberg.

We take the almost contemporaneous publication of the staff report for the 2021 Article IV, which was published a month after the board discussion in January 2022, as a good sign of the authorities’ engagement with the Fund. It follows the publication of a backlog of Article IVs in September, going back over the past decade.

But we don’t see this new-found transparency as a signal of intent towards an IMF programme. There was interest a few years ago, mentioned at the time of the RCF request in May 2020, but it is not clear there is now any BOP need. Indeed, the IMF noted the good macro-performance in the Article IV. However, we wonder if downside risks from the impact of Russia’s war in Ukraine may create a financing need going forward, which might lead the authorities to reappraise the need for IMF support. 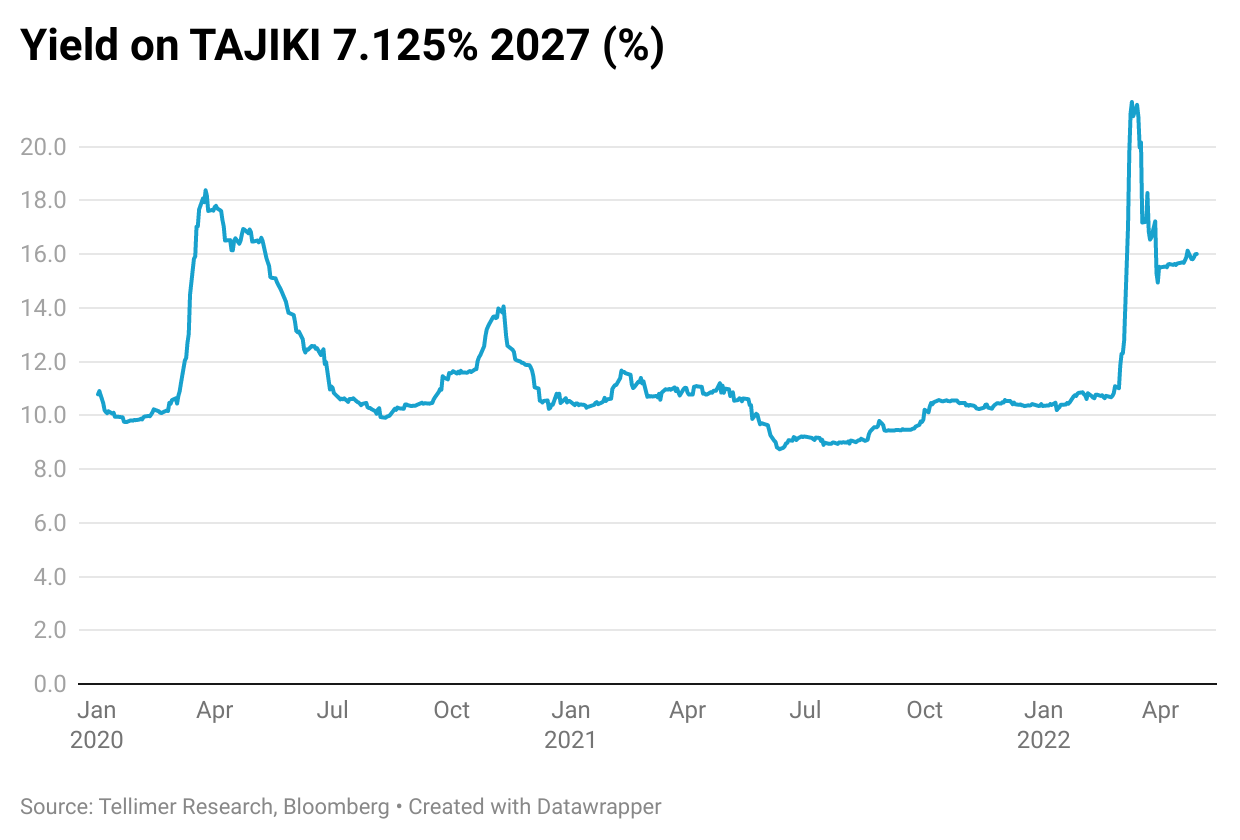 Tajikistan is one of the most exposed countries to Russia through its dependence on remittances, a key source of family incomes and driver of private consumption – the second most dependent on remittances from Russia in Central Asia after the Kyrgyz Republic according to the EBRD. Tajikistan's remittance inflows on the BOP were US$2.7bn in 2021 (31% of GDP), according to the Article IV, with most coming from Russia. Much will depend on how Russia is impacted and how remittances hold up, but it will take time to get a proper handle on this. Moody's projects a 50% decline in remittances.

The Fund has also raised its inflation forecast, projecting 12% yoy at year-end compared to 7.3% currently (March), based on global price developments. Inflation is currently near the top end of the NBT’s target range (6% +/-2ppts), so higher inflation should force the central bank to tighten, although it may choose to focus only on second-round effects, while it is also trying to constrain price rises through delaying utility price increases and waiving import duties. Lower VAT rates in the new tax code may also help to contain prices.

Fiscal performance was better than expected last year, although some of this was expected to be reversed this year, even before the war, due to changes in tax policy. The overall deficit narrowed to 2% of GDP in 2021, which was better than expected due to stronger growth, compared to 4.3% in 2020 due to the impact of Covid. However, the new tax code, which comes into effect this year and lowers tax rates (contrary to IMF advice), was already expected to widen the deficit this year to 2.7%.

However, the war may lead to a further, albeit expected modest, widening in the fiscal deficit this year. The WEO now forecasts a slightly wider overall deficit this year compared to the expectation in the Article IV (3.0% of GDP vs 2.7%), although this seems a temporary phenomenon, as the deficit returns to the authorities’ fiscal anchor of a 2.5% deficit in 2023. The slightly wider deficit is due to lower tax revenue, while so far there is no indication that the authorities plan any kind of fiscal package to cushion the impact of lower remittances and higher prices. We suspect the risk is that the deficit will be even wider.

Public debt is also expected to jump to 54% of GDP this year in the WEO, an increase of some 9ppts compared to the 43% expected in the Article IV. Indeed, pre-war, public debt was projected to return to pre-Covid levels this year. However, public debt is sensitive to the exchange rate (nearly 90% of public debt is external), and the expected rise this year reflects the impact of exchange rate depreciation – the currency has depreciated by 15% against the US dollar ytd. Further exchange rate weakness due to declining remittances could increase the debt burden still further.

The IMF’s updated DSA contained in the Article IV assessed debt to be sustainable, although the risk of debt distress was high (an unchanged assessment from May 2020). The high risk classification reflects a breach of one indicator, external debt service to exports, primarily due to eurobond amortisation over 2025-27. That said, the bonds are a relatively small part of the debt stock (just 17% of public external debt). China is Tajikistan’s single biggest external creditor accounting for nearly 40% of the debt.

The Rogun dam is however the elephant in the room, and visibility on the mega-project (with an estimated cost of cUS$4.8bn, some 60% of 2020 GDP) is as obscure as ever to us. Completion is still expected by around 2030, 45 years after it started. Crucially, for many investors, five years after the bond issue in 2017, it is difficult to know how far along we are.

Availability of financing would seem to be a constraint on pushing ahead (we understand the two turbines that were meant to be replaced last year weren’t because they couldn’t get the financing in place) while there are risks from seemingly not having power purchase agreements (off-takers) in place as well as instability and threats to security in neighbouring countries where the pipelines are meant to go.

The project is macro critical, and – given its size – could impact debt sustainability depending on how it is financed (if all debt, whether external or domestic, it would lift debt/GDP to over 100%, although the impact on debt service would depend on the extent of concessional funding, and there might be an offsetting impact on the denominator too).

However, the political commitment is still there, and that the World Bank sees it as a regional project is significant in terms of demonstrating international support for it, too. However, funding is still uncertain. With the authorities’ agreement to limit non-concessional funding until 2023, and with double-digit yields on the eurobond, meaning Tajikistan couldn’t borrow in the international capital market anyway, it seems much will depend on the appetite of donors and other development partners.

Meanwhile, international reserves have strengthened, reinforcing payment capacity on the bond. Reserves (including gold) were US$2.7bn at end-2021 (32% of GDP), according to the IMF Article IV, providing over 8 months’ import cover – not quite Uzbekistan, but close. This represents a marked improvement from the situation in 2018 (4.5 months’ cover) and has been helped by central bank gold purchases on the back of higher gold production.

The bonds were one of the worst hit (if not the worst) due to the impact of the war in Ukraine on Russia’s economy and remittances flows, falling by some 27pts, but have since recovered about half of their initial losses, and are now down 14pts (by comparison, the other worst hit, Georgia ‘26s, saw a peak decline of 16pts but they have also recovered some of their losses and are now down 10pts). As a result, the bonds have performed broadly in line with the index this year, with a total return of -13.7% ytd compared to -13.2% for the Bloomberg EM Aggregate Index. They have though outperformed the index over the past year, -5.1% vs -12.7% on the index, helped by the relatively high coupon.

However, Moody’s have placed its B3 rating on review for a possible downgrade (which would take it into Caa territory), and resulting technical selling could be a catalyst for further downward pressure on the bonds. Lack of an IMF programme, when others around it are seeking one, may also be a negative for bondholders.

That said, while uncertainty remains over the ongoing impact from Russia and the extent of the hit to remittances (and time may be needed to digest this), as well as the uncertainty around prospects for the Rogun dam, we think Tajikistan’s strong reserves coverage can mitigate payment risks to bondholders in the near-term, a consideration we have noted before. Debt service (interest only) is just US$36mn a year over 2022-24, compared to reserves of US$2.7bn, and we see little supply risk over the foreseeable future. Indeed, given strong reserves, Tajikistan is close to being a public sector net external creditor, with PPG external debt of US$3.3bn, while net public debt is just c20% of GDP.

Moreover, Tajikistan’s gold endowment, with proven gold reserves equivalent to some 360-400% of GDP, as per the IMF Article IV, should reinforce ability to pay (a bit like oil in oil exporters) and could even help to cover bond amortisation if managed well and something is put aside in a sinking fund, regardless of what happens to Rogun. In that sense, we wonder if Rogun – important as it is to Tajikistan’s economic development – is a bit of a red herring for bondholders.

Thus, we think TAJIKI ‘27s at only 5pts higher than Ethiopia – a country which has requested a Common Framework debt treatment, while Tajikistan hasn't – is noteworthy. ETHOPI ‘24s are indicated at US$69 (mid-price basis). Ethiopia just has one bond, like Tajikistan. It also has a grand dam mega-project (GERD), although it is further along than Tajikistan's. But Ethiopia lacks Tajikistan’s reserves cover (and gold endowment) and is in conflict. While the outcome for Ethiopia is unclear, bondholders seem to expect a mild reprofiling.

Notwithstanding the difference in liquidity and investor base (Ethiopia is a bigger bond and has more natural support among SSA investors), we think this could act as a floor for recovery prospects in Tajikistan. 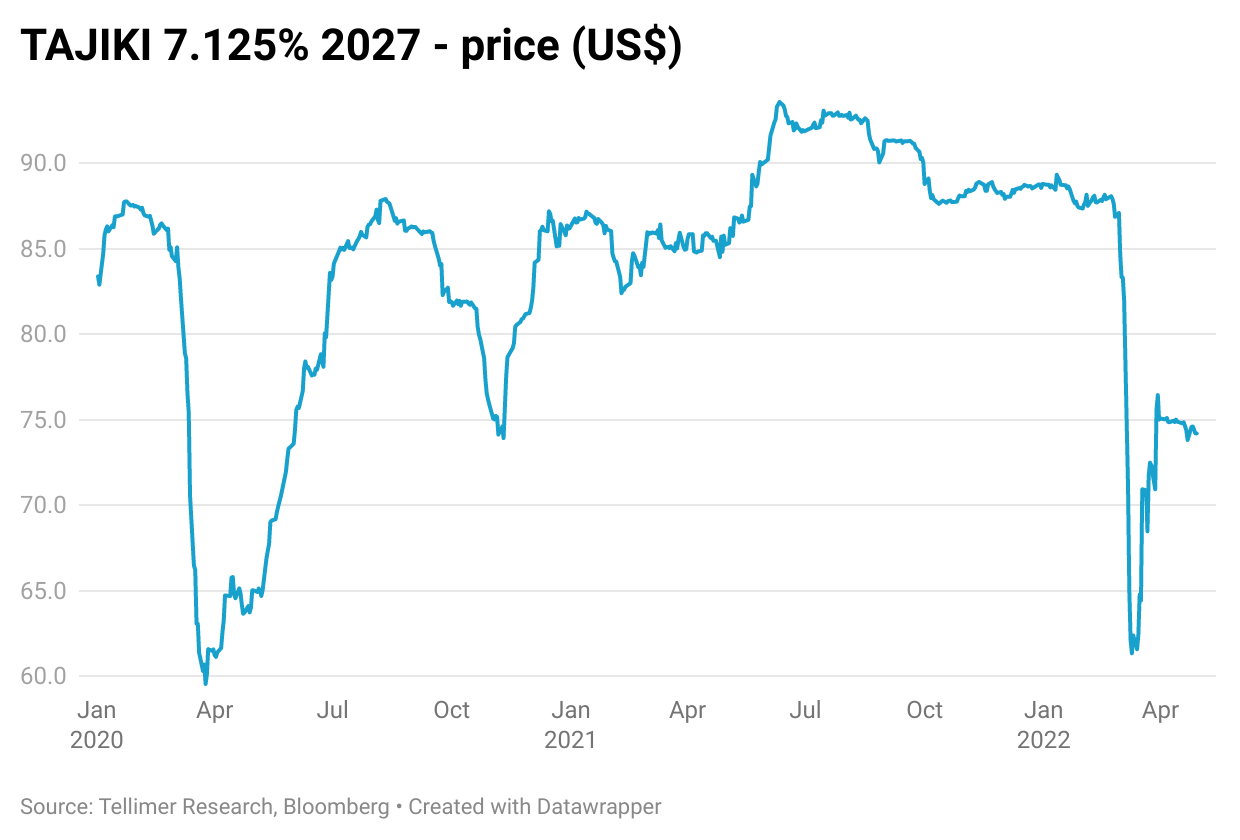