We set out our thoughts on Tajikistan following our discussions with the IMF team during the recent IMF/World Bank Annual Meetings. We would like to thank IMF staff for their time. The views we set out here are our own. We maintain our Buy on the TAJIKI 7.125% 2027 bond with a yield of 22.8% (price US$63.1) on a mid-price basis as of cob 19 October on Bloomberg.

The situation has changed a bit since the Spring Meetings; when it was relatively early on after the war in Ukraine had started and there was a lot of uncertainty about its impact, while the IMF’s last Article IV dates from February.

The expectation, for an economy very dependent on remittances from Russia, was that we would see a large impact (remittances amounted to over 25% of GDP in 2019, over half of which were from Russia, according to the EBRD). But this hasn't happened and Russia’s economic contraction has itself been milder than expected (the April WEO showed Russian real GDP growth of -8.5% in 2022, the October WEO now projects -3.4%). The Tajikistan story, with minimal spillovers so far, is consistent with what has been seen elsewhere in the region. Remittance flows dropped initially but rebounded quickly. However, it is difficult to know for sure, given lack of timely official data, leaving reliance on BOP data (Q2) and anecdotal evidence. In addition, inflows may have been boosted by migration from Russia, with Russians bringing money with them. 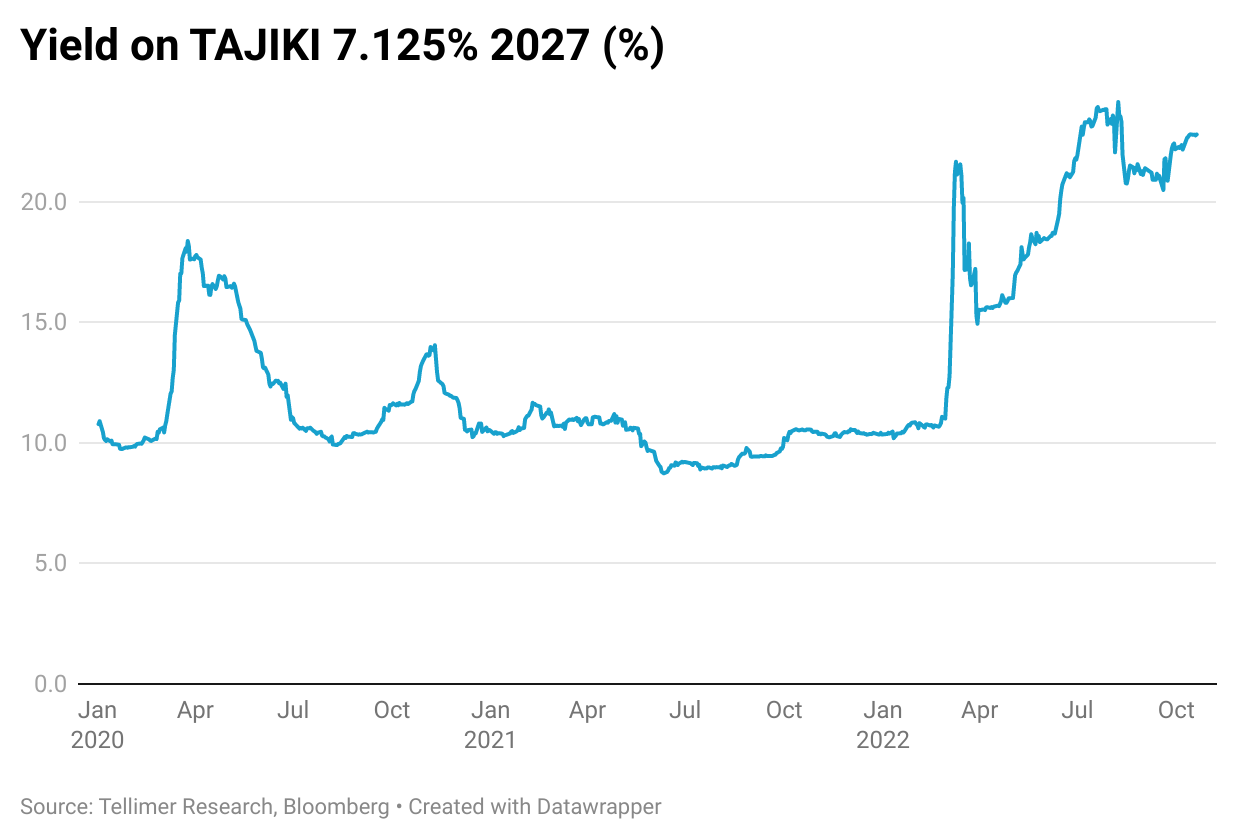 As a result of stronger than expected remittances, the IMF have revised upwards its real GDP growth projection for this year to 5.5% in the WEO, after revising growth down by 2.5ppts in the aftermath of the war (essentially returning the growth forecast to where it was in the Article IV). And this could be an underestimate – real GDP over the first nine months of the year rose 7.8% yoy. Growth has been broad-based, across construction, agriculture, and services, not just reliant on a single driver, although data quality is not ideal. However, the caveat is that the outlook is still uncertain. How Russia will be impacted over the longer term, and spillovers to Tajikistan, is still unclear.

Stronger remittances have also helped boost foreign exchange reserves. Reserves have increased this year, standing at US$3.4bn in August (some 34% of projected 2022 GDP) based on IMF IFS data (reserves including gold), a rise of nearly US$0.9bn (+36%) this year. Much of the increase occurred in the second quarter. This reflects the strength of remittances, as Tajikis in Russia may be sending more back amid uncertainty about keeping savings there, while a shift in domestic confidence has given rise to increased use of local currency, which has allowed the central bank to purchase dollars. The central bank has also continued gold purchases. This is also on the back of a current account surplus (4% of GDP this year projected in the WEO, although it eases to balance next year). 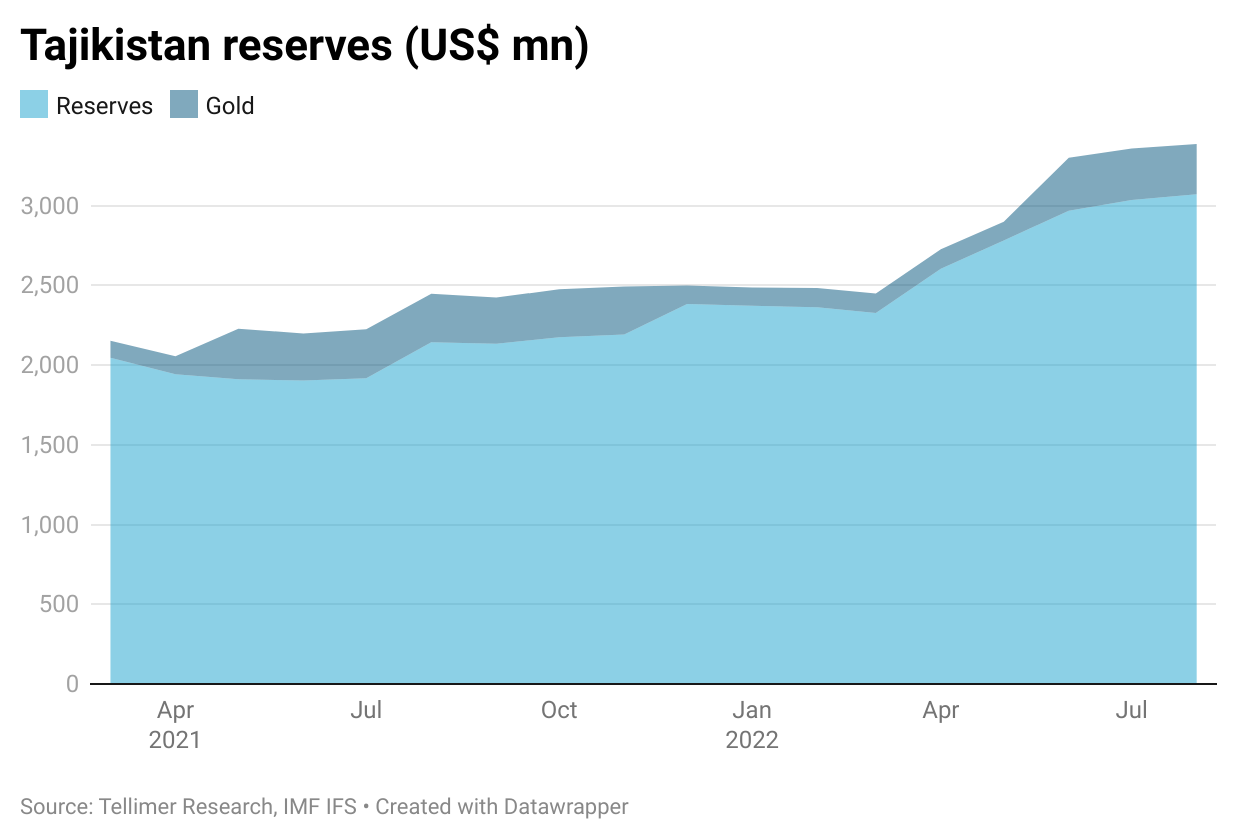 Inflation, in single figures, has also been surprisingly low, especially considering it is in double digits across the region. Inflation was 6.5% yoy in August (September’s reading was subsequently released showing a slight fall to 5.7%), compared to 8.0% at end-2021, and bang in-line with the central bank’s inflation target (6% +/-2); not many central banks can say that. The authorities attribute this to strong domestic food production, after a good harvest contained prices, and the sale of its large wheat reserves onto the wheat market has kept prices down. The composition of the CPI basket may also be different in Tajikistan (where over 50% of the index is food and energy) compared to other countries. The drop in commodity and energy prices over the summer, as well as FX appreciation, have also helped. The currency (somoni) was expected to depreciate with the Russian ruble, adding to inflation risks, but this didn’t happen; instead RUB has appreciated. Consequently, the IMF have revised down its inflation forecast for the end of this year in the October WEO to 8.5% from 12.0% in April.

Monetary policy is tight. The central bank has been hiking rates gradually since it began its post-Covid tightening cycle in February 2021, raising rates by a cumulative 275bps to 13.5%, much less than most countries elsewhere around the world, and only once this year (25bps at its last meeting in August). With inflation at 6.5%, the ex ante real interest rate is 700bps, which must be one of the highest in the world let alone the region. The central bank’s next MPC meeting is due on 25 October.

The fiscal deficit remains under control. The expectation at the time of the Spring Meetings of some fiscal loosening this year due to slower growth and additional social spending needs generated by the war in Ukraine has not materialised. Revenue figures for the first half were good, and the authorities are managing the spending side, so they are on target with the budget. The 2.5% of GDP deficit target for this year looks likely it will be met. A 2.5% deficit was the recommendation in the Article IV for fiscal policy consistent with sustainable debt.

That said, it is difficult to disentangle the revenue impact of the change in the tax code the authorities introduced at the beginning of the year with higher GDP growth. The new tax code responds to regional competition for lower taxes but the IMF stated in the Article IV its concern that it included lower tax rates but without broadening the tax base and removing tax exemptions.

In the meantime, public debt remains low, projected in the WEO at 39% of GDP this year, although the IMF’s DSA puts Tajikistan at high risk of debt distress due to a single threshold breach.

There is little to add on the Roghun dam compared to last time. The dam is macro-critical, given its size and importance to Tajikistan’s future economic development, with an estimated cost of US$4.8bn (about 48% of projected 2022 GDP). Completion is expected in 2032, nearly 50 years after it started, although crucially, for many investors, five years after the bond issue in 2017, there is little visibility on where we are in the project.

Its viability depends on its ability to export on which there is some uncertainty over the key target markets of Pakistan and Afghanistan (although we understand there has been more progress towards purchase agreements with Kazakhstan and Uzbekistan). That said, two of the six turbines are operational and we notice the statement from Webuild (the Italian construction company leading the civil works) on 15 July on the first pour of concrete for the core dam, hailed as a significant milestone. But the project still needs a lot of financing, which will need to be mainly concessional given the country’s limited fiscal space, and needs to attract new MDBs/investors.

Moreover, the impact on the country's debt level is significant and we worry that the dam could threaten debt sustainability, depending on how it is financed (if all debt, whether external or domestic, it would lift debt/GDP to 90%, although the impact on debt service would depend on the extent of concessional funding, and there might be an offsetting impact on the denominator too).

The authorities have recently renewed their interest in an IMF programme, under the Extended Credit Facility (ECF), although we detected little interest in a programme during the Spring Meetings, and discussions continue. With a current account surplus and increasing reserves, we see no BOP need. Rather, we think what is driving the programme interest is the investment needs of the dam, with a programme acting as both a rubber stamp to help attract investors and to provide reassurance over debt sustainability.

But we think a programme potentially raises some thorny issues for the Fund and investors, as we've noted before. We think any DSA will have to include the dam, given its size and importance. But Tajikistan is already at high risk of debt distress, so it may not take much to push it into unsustainable territory, which would then prevent a programme (or require a restructuring under IMF lending rules, presumably under the Common Framework), while it is not clear to us that the Fund will get the necessary disclosure of information and degree of transparency about the project that it needs to complete the DSA, which could stall progress.

We maintain our Buy on the TAJIKI 7.125% 2027 bond with a yield of 22.8% (price US$63.1) on a mid-price basis as of cob 19 October on Bloomberg. The bonds have performed poorly this year, albeit in line with the index, with prices down 29% ytd (and a total return of -22% vs -25% for the Bloomberg EM Sovereign USD index), due first to the impact of the war in Ukraine and second, to the tightening in global financial conditions, and we recognise that the bonds are down 11pts (15%) since we upgraded to Buy after the Spring Meetings. They are, however, up 3pts from their lows this year.

On the positive side, Tajkistan's (B3/B-/-) solid macro fundamentals, policy discipline, stronger than expected remittances, and the economic resilience displayed since the war in Ukraine began, should provide some support to the bonds. Moreover, we think its strong reserves coverage, and gold endowment, with proven gold reserves equivalent to some 360-400% of GDP, according to the IMF, can mitigate payment risks to bondholders in the near term, as we've previously noted. Debt service (interest only) is just US$36mn a year over 2022-24, ahead of the bond's amortisation commencing in 2025. Bondholders may also welcome an IMF programme, although as we note above, that may not be without its risks.

Meanwhile, Moody’s affirmed its B3 rating on 17 October, with a negative outlook, after having put the rating on review for possible downgrade on 30 March. The ratings agency cited the economy’s resilience to the fallout from Russiaʼs invasion of Ukraine in its decision. This could support technicals by reducing the potential risk of any imminent forced selling as a result of a downgrade.

That said, bondholders remain concerned about the external environment, sanctions risk related to Russia (Tajikistan is treading a steady path balancing both sides, but investors worry it might get caught up somehow), and the bond's poor liquidity. They are also concerned about willingness to pay the bond (out of reserves), as amortisation comes due, as Tajikistan has (long since) lost market access given prevailing high double-digit secondary market yields, which makes rolling over the bond prohibitive at current rates. However, amortisation is still a few years away. 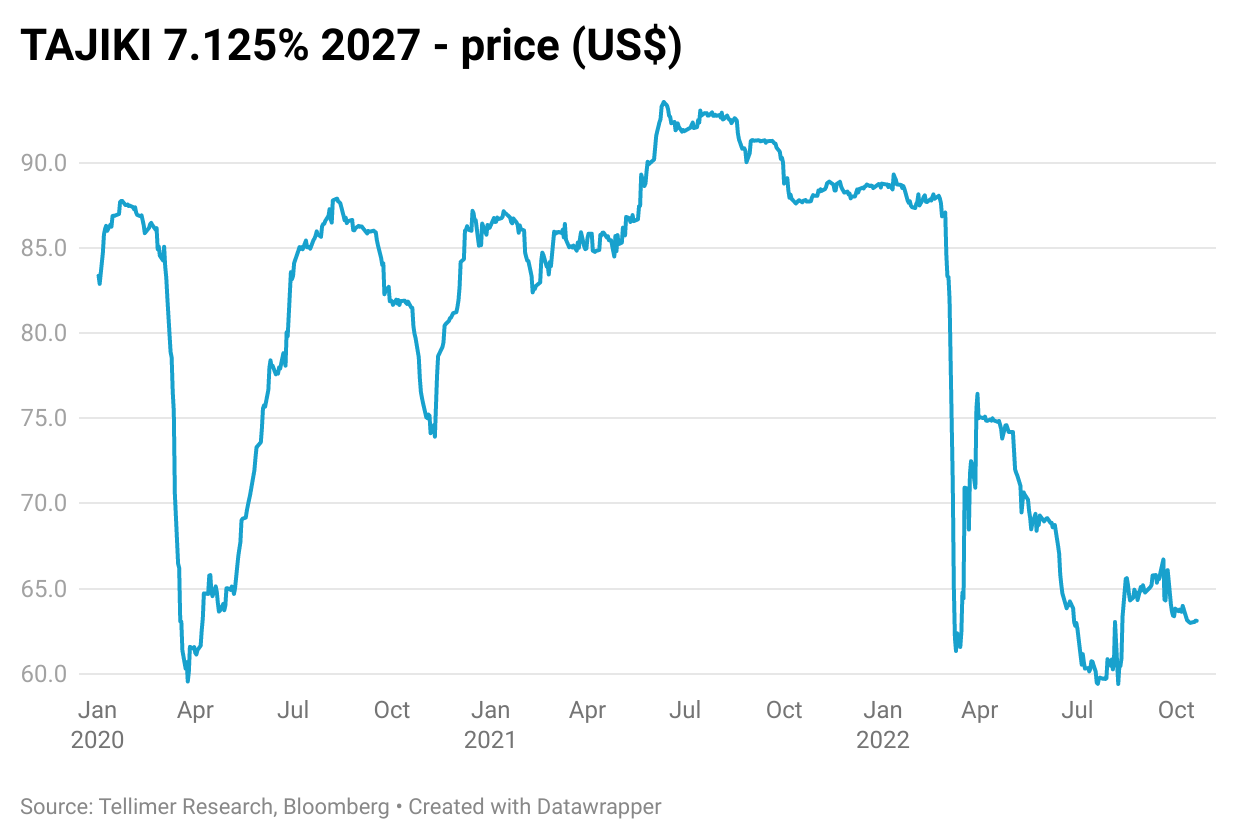