Eric Chu returned to the helm of the Kuomintang in Taiwan, the more mainland China-leaning opposition party, after the party election on 25 September. However, he will need to engineer a greater swing in support than seen in any election over the last twenty years to win the presidency in 2024. Eroding the legislative majority of the governing Democratic Progressive Party may be a more realistic goal.

At this early stage, it appears that China is unlikely to see a more cooperative leadership in Taiwan any time soon: expect to see, at least, a continuation of friction around agricultural imports, trade treaties (witness both China and Taiwan's separate recent applications to join the Trans-Pacific Partnership), air force incursions, and US relations.

Chu is likely a more electable presidential candidate than the runner-up, Chang Ya-chung, whose harder line pro-unification views would have likely alienated too much of the electorate; eg in a 2019 Pew Research survey, merely 36% of Taiwanese respondents favoured closer political relations with mainland China, compared to 60% who opposed. Chu is aged 60, and is a former Vice President (2009-10), mayor of New Taipei (2010-18), and losing candidate in the 2016 presidential election.

Incumbent President Tsai Ing-wen, who champions Taiwan nationalism, reaches her two-term limit in 2024 and will not contest. It is not clear as yet whether VP William Lai Ching-te will run as the DPP candidate and to what degree the legacy left to him by Tsai has been eroded by public disquiet over the government's handling of the Covid crisis, the decision to lift the ban on imports of US pork which include the additive ractopamine, and the denial of a cable TV broadcast licence for mainland China-aligned CTi News. 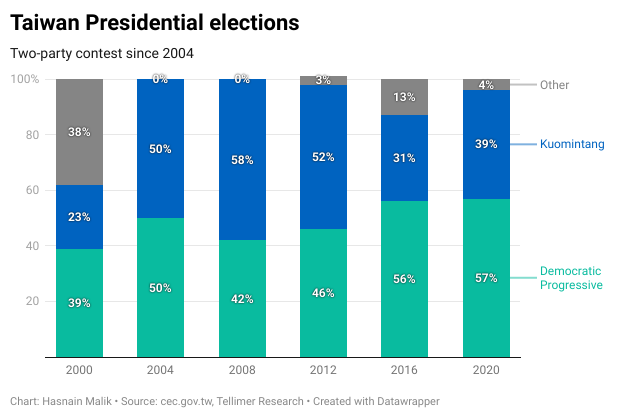 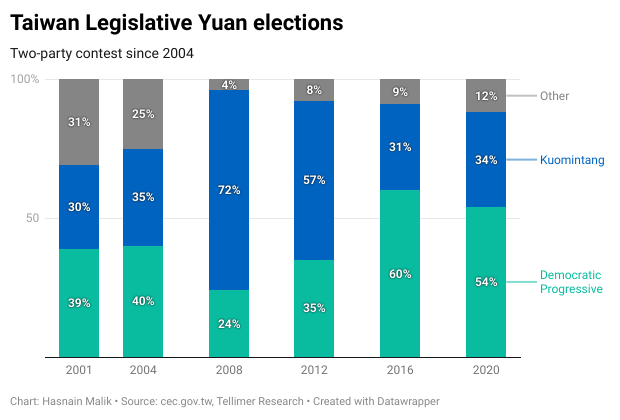 Taiwan's largest stock, TSMC, is also the largest stock in MSCI EM, with a 6.4% weight (bigger than the whole of Brazil, and about the same weight as Russia and Saudi combined). Although no longer at the peak forward PE valuation multiple of 29x exhibited in February, at 25x currently it is still at a 10% premium to the 5-year median. A multi-year manufacturing technology lead, an overall global chip shortage, and reallocation away from China Tech has driven this year's upward re-rating. 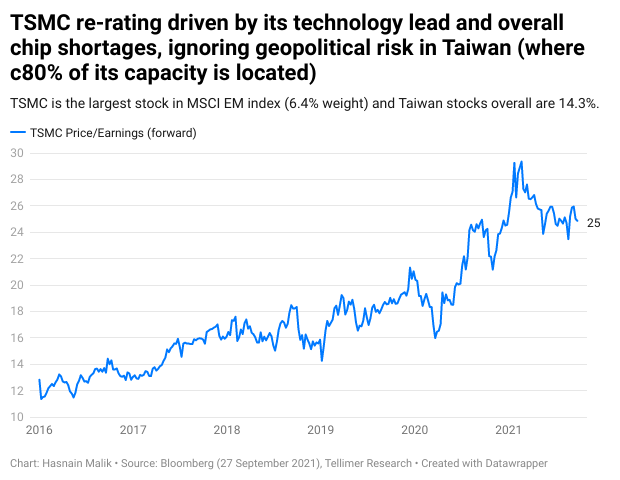 Predicting the timing of when friction between China and Taiwan, or others in the region, boils over into an event that serves as a reminder of the risk facing the 80% of TSMC capacity that sits in Taiwan is impossible. But at a premium valuation to the historic average, there is arguably little compensation for this risk. Note that as recently as 23 September, there was another large China air force sortie into Taiwan's air defence identification zone. 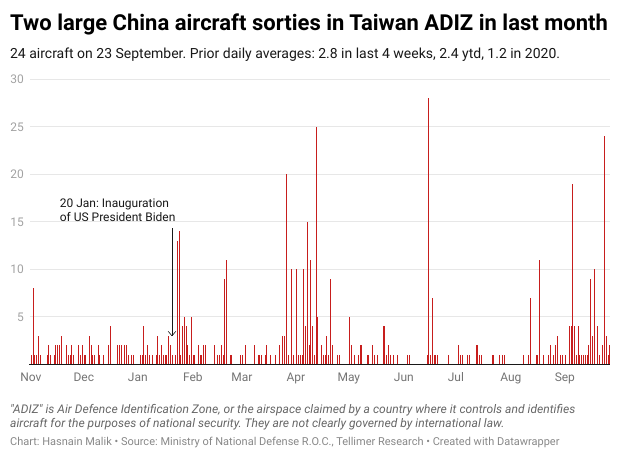 US allies in Asia-Pacific do not need reassurance, August 2021

TSMC as key to chips as Middle East is to oil; a pointer for Biden's priorities, January 2021