The Republic of Suriname presented its proposed restructuring terms in an investor update yesterday, outlining its plans for the bonds, official bilateral creditors and domestic debt. The government is seeking a 70% nominal haircut on external commercial debt, which mostly comprise its two international bonds.

With the offer valued at some 45pts below current prices (for the '26s), according to our estimates, bondholders seem likely to reject the government's proposed terms in our opinion, which could lead to protracted negotiations and pose downside risk to current prices. We downgrade to Sell from Hold.

The government's proposed restructuring terms for its external commercial debt involve a 70% nominal haircut on claim, a maturity extension, and coupon reduction. The final maturity of 2029 implies a three-year maturity extension on the 26s, but a much longer six years on the 23s. With the new coupon stepping up from 4% to 6%, the coupon reduction is also much larger on the 23s (currently 12.875%) compared to the 26s (9.25%). The proposed terms are summarised below. 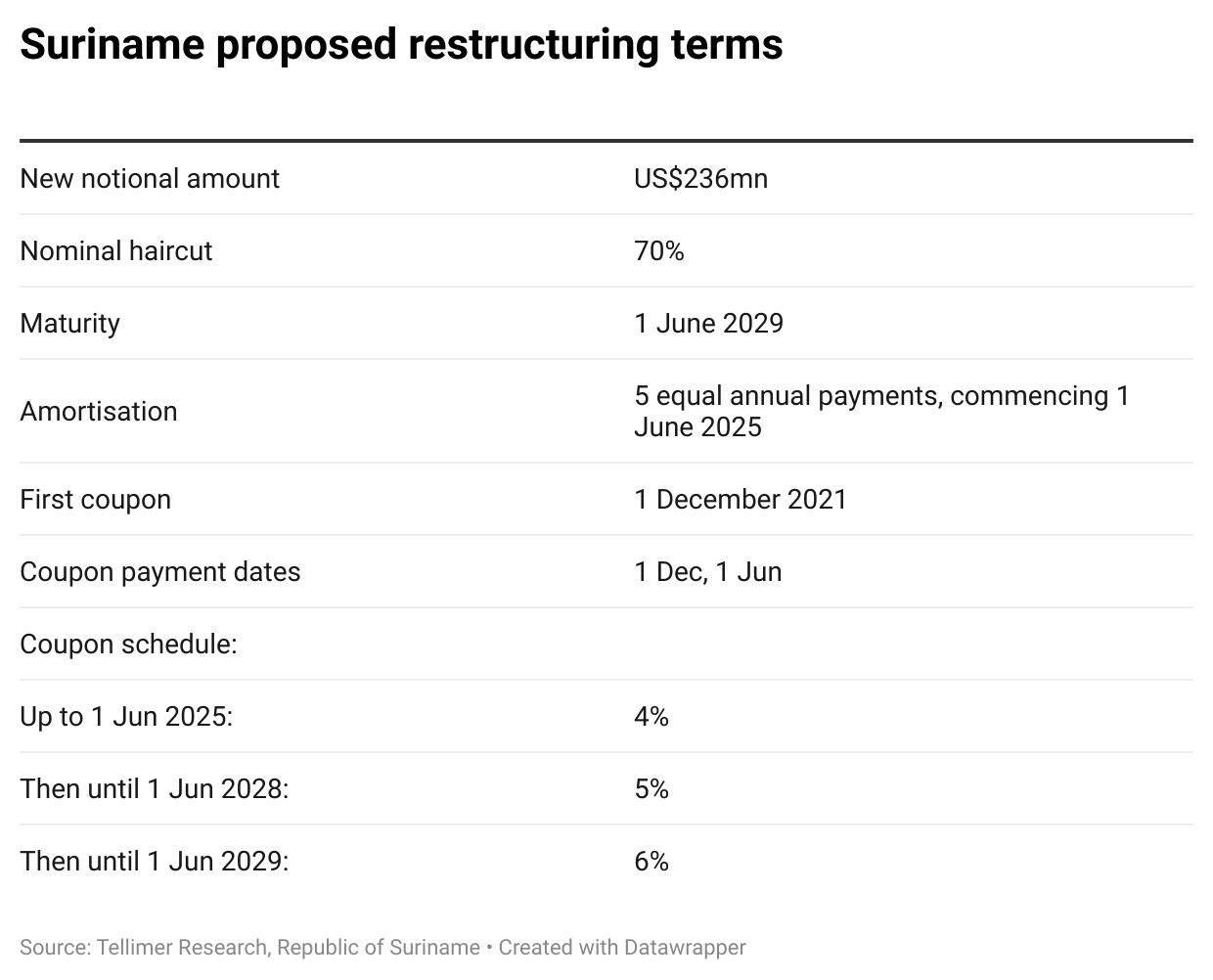 The government calculates the total claim on external commercial debt to be restructured as US$786mn. This comprises US$702mn in principal and US$84mn in Past Due and accrued interest (PDI). The 26s make up the bulk of the claim (80%). The new bond will therefore be US$236mn outstanding, and hence – under this proposal – Suriname will fall out of the benchmark bond index (EMBI), which would further impact trading and liquidity, a risk that we have highlighted before.

On the surface, there might also be some concern that bondholders are being treated unfairly compared to official bilateral creditors, if we compare the proposed 70% nominal haircut on commercial debt with the modest 30% haircut being proposed on bilateral debt, despite the government's stated intention to treat all creditors fairly. However, we note that the proposed terms for bilateral creditors should imply a much bigger PV reduction as it involves much longer repayment profiles (with final maturities ranging from 2036 to 2046, and a much longer average maturity – 15.7 years compared to 6 years on the bonds), and a lower coupon (1.2%); although we lack all the information needed to do a more precise calculation and comparison. It would also depend on the official sector's discount rate, which regardless, will be much lower than the private sector's. No doubt, bondholders will seek this information in future discussions to ensure they are not being treated less favourably than bilateral creditors.

The government's restructuring proposal also shows they are willing to consider state-contingent payments in the form of a Value Recovery Mechanism (VRM). This recognises the possible transformative impact of recent oil discoveries, but also the uncertainty around it. However, other than stating its willingness to consider them, and setting out some guiding principles, there was nothing on their design. That said, one stated principle (that the design will only aim to compensate creditors for their losses) might temper expectations about their upside potential (eg compared to Ukraine GDP warrants). Moreover, in the case of separately traded instruments (Value Recovery Rights), such instruments already tend to be less liquid than plain vanilla bonds (in part because they are not index eligible and can be difficult to value), and this might be even more so here, given the small size of the bond implies a small VRM issue. Better we think to consider an uplift to payments on the new bonds if certain conditions are met (eg higher coupon or principal clawback), something more like Grenada's CBI payments ("passport warrants"), than separately traded instruments that are too complicated and illiquid.

Assessment of the offer

Valuing the offer may be somewhat academic given it is so far away from current prices and seems highly likely to be rejected. But, we present our estimated recovery values anyway, for completeness (see table). We estimate a recovery value of US$20 in PV terms, expressed per unit of existing principal, at a benchmark 12% exit yield. 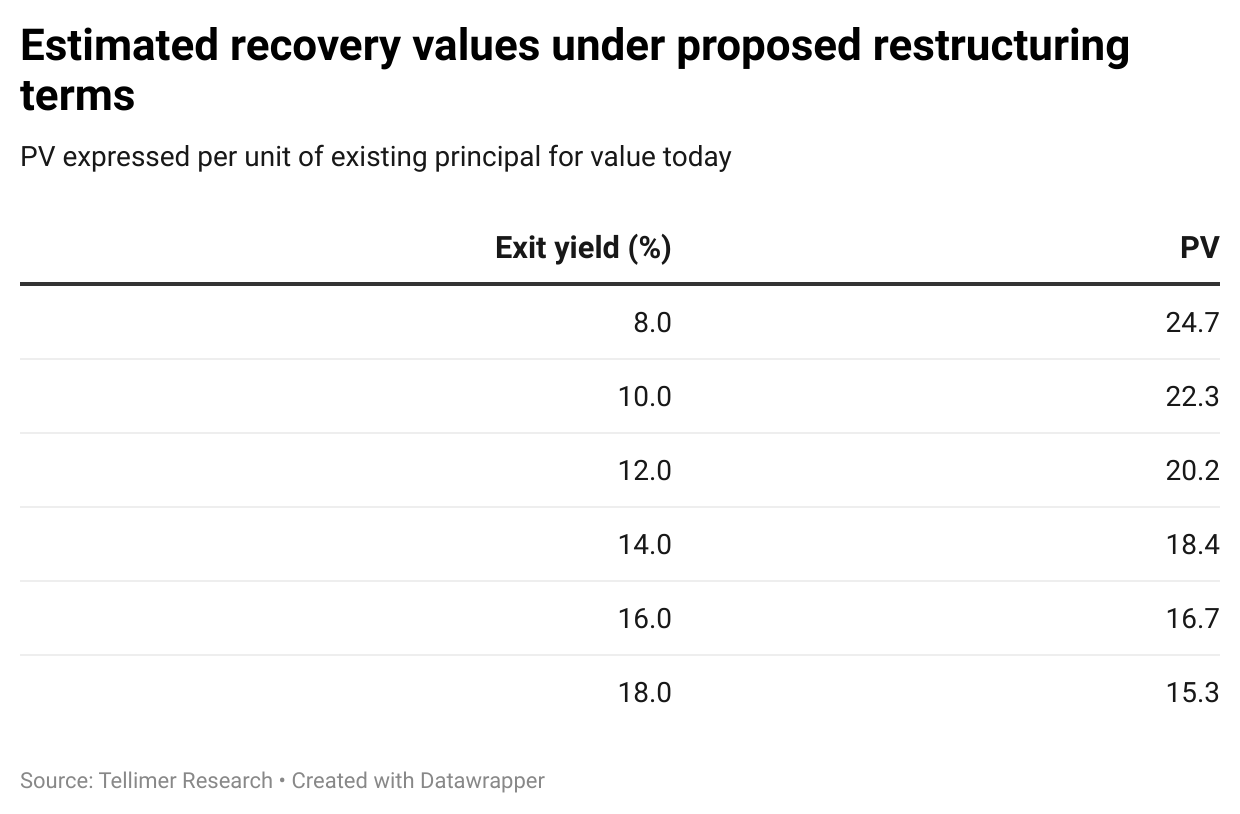 With the two sides so far apart, the (initial?) low-ball proposal appears to set the stage for protracted, and even more confrontational, negotiations. While the government has an incentive to talk the price of the bonds down, it comes after bondholders had already accused the government of breach of contract, according to media reports, after they said the announcement on 29 April of a staff-level agreement with the IMF on a new programme (three-year US$690mn EFF, which we calculate to be 367% of quota) was made without their input. Bondholders argued this was a breach of the government's obligation under the consent solicitation to negotiate in goodfaith (as set out under the "termination trigger"), a charge which the government refuted. The government yesterday reasserted the key principles of its creditor engagement strategy, namely transparency, goodfaith efforts, intercreditor equity, and consistency with the IMF's DSA targets.

Bondholders will no doubt seek better terms and we believe a robust and well coordinated creditor committee may be successful in doing so, as we've seen numerous times before. While 70% is a significant nominal haircut, and would be amongst the largest we can remember in recent restructurings (Belize just asked for a 30% nominal haircut, although in PV terms it is not so very far away from Suriname's, and we think that will be rejected too), we might expect an initial low ball offer and for the government to improve it after further discussions. Creditors can be patient and have some protections from the bonds' CACs in being able to resist what they see as a bad deal.

There might also be a stronger incentive on the government to reach a deal with bondholders in order to secure the IMF programme and catalyse other official sector financing. Failure to reach a deal with bondholders could prevent the programme going ahead; the IMF's staff-level agreement made clear that approval was conditional on prior actions and securing the necessary financing assurances from creditors, although the test under the IMF's (now not so) new lending into private sector arrears policy is satisfying itself over goodfaith negotiations, which can be a subjective judgement.

But how much better bondholders can do is unclear. Public debt at 159% of GDP in 2020 (on government figures) provides little room for manoeuvre and, even with the government's ambitious fiscal plans, if not 70%, a larger haircut than implied by current prices may be necessary. To be clear, with external commercial debt only 23% of total public debt, public debt falls to only 136% on our calculations, even after a 70% haircut, other things equal. This will put the emphasis on the bilateral debt treatment and outlook for domestic debt, especially in terms of the impact on the debt in PV terms and gross financing needs. The government is targeting public debt/GDP of 120% by 2024 and 60% by 2035. And the government is already targeting a big fiscal adjustment with a fiscal surplus of 4.5% of GDP by 2024, compared to a primary deficit of 10.2% in 2020; a fiscal adjustment amounting to c15ppts. It may feel it cannot do much more.

We therefore see downside risk to current prices even if bondholders can get an improvement on the 70% haircut. In fact, keeping other proposed terms unchanged, current prices would only be consistent with a par exchange (no haircut), at a 12% exit yield, which seems unlikely. A 40% haircut on the other hand, large but not unreasonable given the fundamentals, would entail a PV of about US$40. And, as we've noted before, Barbados (with a not dissimilar debt/GDP ratio in its default in 2018) saw a nominal haircut of 25% on principal and 26.3% on claim. Here, a 25% haircut would imply a PV of cUS$51 - which is not dissimilar to the estimated recovery in the downside scenario we presented in our earlier research (Suriname: Restructuring prospects as new government seeks standstill, dated 9 November 2020). 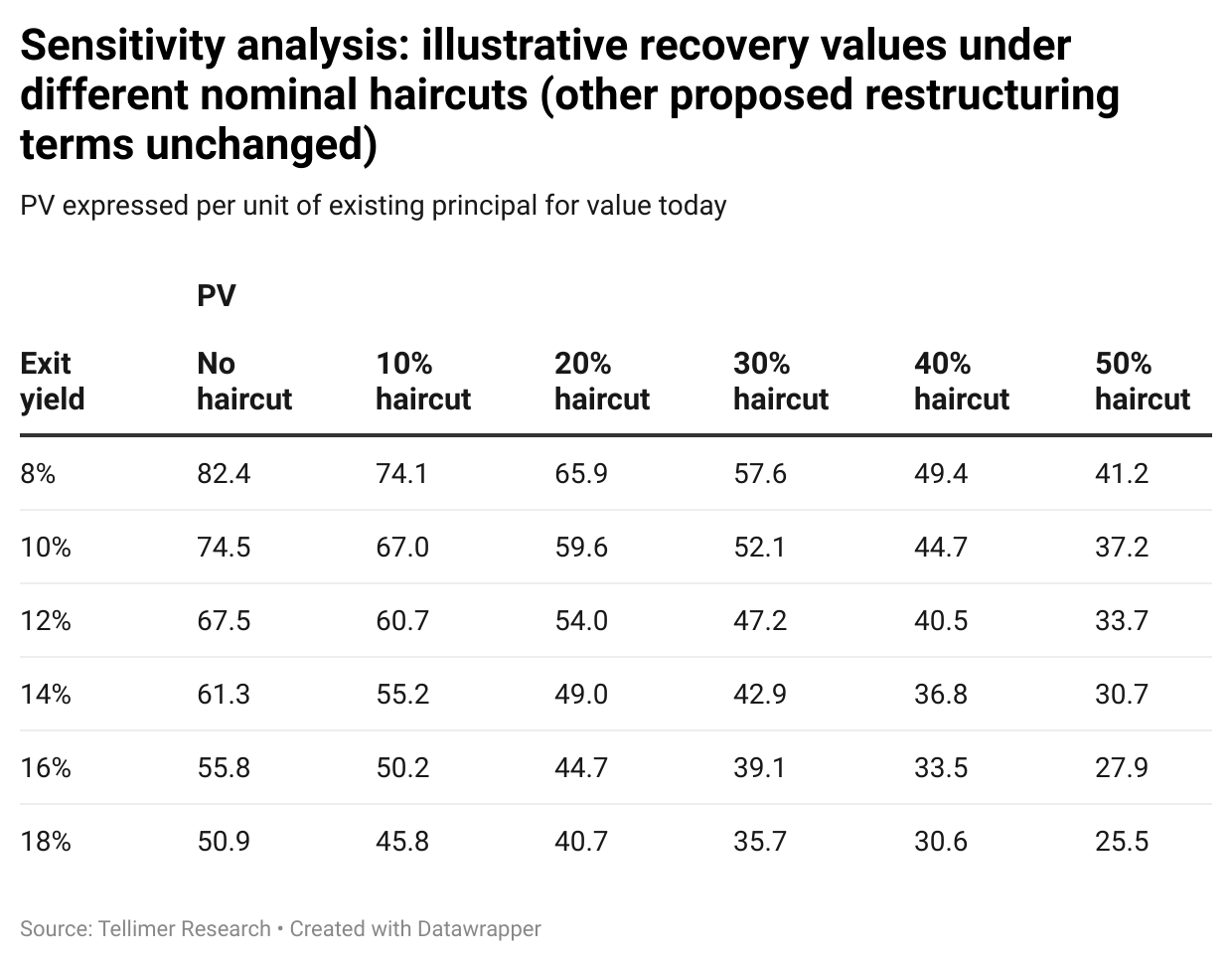 Moreover, time is tight. Under the most recent consent solicitation, approved in April, payments are deferred until 30 July, which may not leave much time to reach a deal (although bondholders may argue that under the termination trigger, the deferral of payments should be cancelled and all payments are due immediately anyway). If no deal is reached by then, either the government has to pay (which we doubt it will) or they have to seek a new consent solicitation, or go into hard (payment) default.

We downgrade Suriname '26s to Sell from Hold, at a price of US$66.6 as of cob 2 June on Bloomberg (indicative mid-price basis). Bond fell 2pts on the day, after the government's presentation, and are indicated four points lower today at US$62.6. However, while we see downside to current prices on a worse-than-expected deal, concentrated holdings and creditor power may support prices. 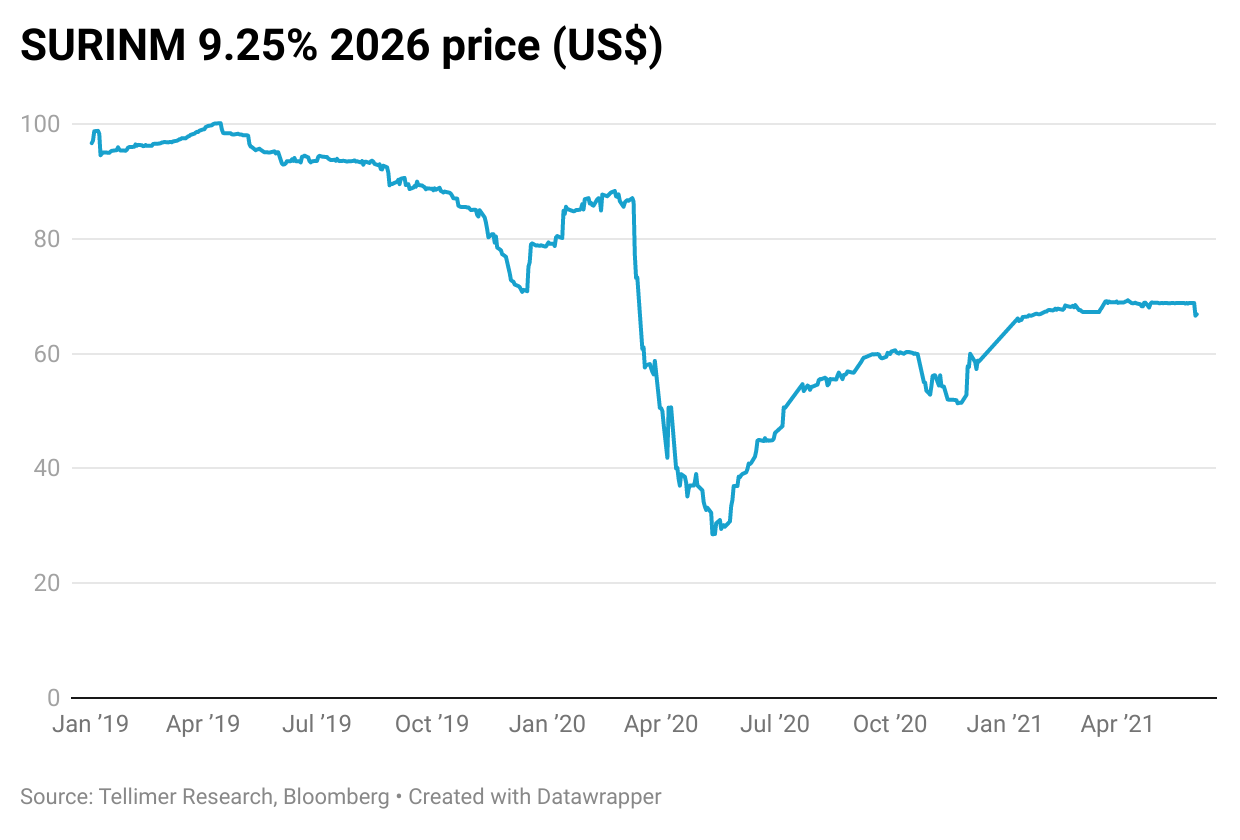