A surging USD caused more bloodshed across global currency markets yesterday as traders brace themselves for the potential of an outsized rate hike this week. With the exception of the JPY, no G10 currencies were spared yesterday, with the EUR and GBP losing -0.78% and -1.14% on the session as the USD rose to a near 20-year high. Emerging market currencies were also a sea of red yesterday, with the likes of the BRL (-2.51), MXN (-2.30%) and the CLP (-1.84%) amongst the biggest losers on the day. The sell-off in crypto also deepened on the back of yesterday’s USD strength, with bitcoin shedding another 15%. While the broader bullish bias remains intact, the topside bias in the USD has stalled this morning, providing some temporary breathing room for battered currency markets. Heading into tomorrow’s FOMC meeting, the market is pricing in a more hawkish move, with consecutive 75bps rate hikes in June and July now close to fully priced in. Therefore, the risk heading into the FOMC meeting is that policymakers are less hawkish than the market is pricing for, which would result in a correction in the USD in the days that follow. The base case however is for the USD strength to persist in the near term as inflation in the US continues to run hot.

Egypt: Finance Minister Mohammed Maait has noted that high oil and wheat prices will cost Egypt over $10bn. According to Maait, oil prices staying at $122 per barrel will cost the Egyptian budget $7.2bn while higher global wheat prices and pressure on the Egyptian pound would burden the government with an additional $3bn. Foreign currency challenges have gripped the Egyptian economy since the coronavirus pandemic weighed on the tourism sector, international portfolio investors withdrew funds and the Ukrainian crisis pushed up commodity import prices. Given the current turmoil in the global markets, Maait also noted that Egypt might postpone the issuance of its first sovereign Sukuk till its new fiscal year. Egypt's fiscal year runs from July 1 to June 30.

Ghana: The Development Bank of Ghana will officially start operations today. The bank has around $800mn in capital and plans to grow lending fivefold over the next five years to help end a shortage of funding for small and medium-sized enterprises. A lack of available credit has stymied small and medium-sized enterprises across most of the continent. That’s inhibited economic growth and employment creation. Many of these enterprises lack the credit-worthiness or track record to secure normal bank loans.

Mozambique: Data released yesterday confirmed that inflation pressures remain entrenched in the Mozambican economy. Headline inflation accelerated further to 9.31% y/y in May from 7.90% y/y in April. This was the fastest pace of price growth in the economy since September 2017  and marked the third straight month consumer prices have risen as the war in Ukraine pushes up fuel and food prices. With risks to the inflation outlook tilted to the upside in the coming months, policymakers could consider tightening rates following a pause at the meeting in May.

Zambia: Secretary to the Treasury Felix Nkulukusa yesterday indicated that a date for the first meeting of Zambia’s official creditor committee had not been set yet. Nkulukusa was quoted as saying, “we are waiting for the Paris Club secretariat to give us that information.” France, which hosts the Paris Club forum for international creditors, and China are co-chairs of the bilateral negotiations to restructure Zambia’s external debts, which reached $17.27bn at the end of last year, according to government data. Meanwhile, a presidential spokesperson said the meeting was likely to occur before the end of June. The Zambian government had previously repeatedly said that it hoped the negotiations would be finished by that time. Zambia needs financing assurances from official creditors to secure approval from the International Monetary Fund board for a $1.4bn bailout package.

Gold: Gold did not have a good start to the week as investors experienced the largest one-day drop in three months on concerns that the Fed could consider its biggest rate hike since 1994 at the upcoming meeting following the US inflation print on Friday. The bets are now skewed towards a 75 bp hike as inflation runs hot in the world’s largest economy. US Treasuries fell sharply with yields testing 2011 levels while the dollar ran a rampage trading within a whisker of a two-year high. This morning we have the yellow metal picking up the pieces with some bargain hunting noted in Asia. We are presently quoted just north of the $1825.00/oz level as we enter the start of the EU trading session.

Oil: Oil prices seem to be withstanding the global financial market rout and concerns over an economic slowdown. The front-month Brent and WTI benchmark contracts remain above $120 per barrel as the tight supply situation outweighs China’s lockdowns and the expectations that the Fed will increase its pace of monetary policy tightening, both of which will crimp demand. Currently, supply levels are significantly lower than where they have been going into previous recessions, indicating that we could see prices remain elevated for some time to come still.

The Kenyan Shilling (KES) yesterday plunged to its weakest level on record, north of 117 per dollar, extending its year-to-date drop to 3.62% as increased demand for hard currency, particularly from oil-importing companies, weighed. Additional downside pressure on the KES stemmed from the cancellation of plans to issue a Eurobond, whose proceeds are much needed to support the currency. Treasury secretary Ukur Yatani confirmed that Kenya was cancelling plans to issue a Eurobond this year due to “extremely high pricing.” Kenya scrapped plans for a $1bn Eurobond issuance last week after receiving bids priced at 12%, compared with 6% last year. 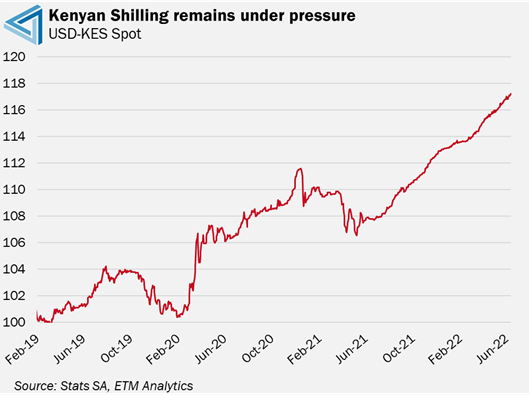 Kenya is now planning to borrow around $1bn from banks by the end of June. This was confirmed by the head of the Public Debt Management office yesterday. According to the head, Kenya is seeking funds “as bridge financing from a couple of banks.” The head, however, stopped short of providing the details of the lender involved but noted that Kenya expects “low single-digit rates.”

Weak financial inflows following the cancellation of the Eurobond issue will further widen Kenya’s current account deficit, which by extension, will weigh on the currency. Note that Kenya’s rising import bill has also contributed to the deterioration of Kenya’s current and trade accounts. With dollar demand persistent from all sectors and inflow not able to match it, we expect the bearish bias on the KES to continue in the near term.

The spotlight this morning remains centred on East Africa after Moody’s delivered its latest sovereign credit rating update on Rwanda. Moodyʼsaffirmed the Government of Rwandaʼs long-term local and foreign currency issuer ratings and foreign currency senior unsecured rating at B2. The agency also noted that the outlook remains negative. The decision to maintain the negative outlook reflects Moodyʼs assessment that credit risks remain skewed to the downside, as rising global energy, fertiliser and food prices are likely to maintain pressure on government spending and increase its fiscal and debt consolidation challenge.

Moody’s said that the governmentʼs ability to respond to future shocks may be impaired should these pressures translate into further deterioration in Rwandaʼs already weakened fiscal and debt metrics. That said, the decision to affirm Rwanda’s B2 rating is underpinned by the countryʼs solid growth prospects, its relatively credible and effective institutions compared to peers, and financial assistance from development partners that support economic resiliency and mitigate repayment and debt affordability risks. 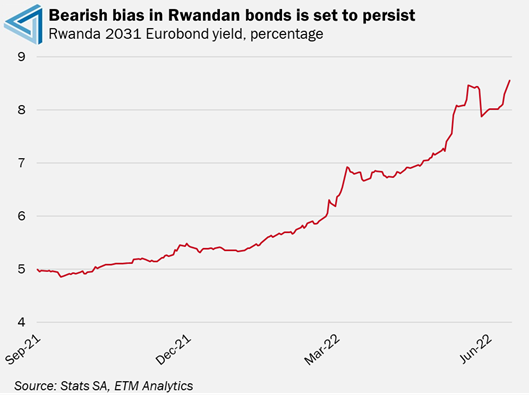 As has been the case for most countries around the world, Rwandaʼs fiscal position has deteriorated, and its government debt burden has risen sharply during the pandemic era, adding to an already negative pre-pandemic trend. While Moodyʼs expects the governmentʼs fiscal deficit to narrow slightly in the coming fiscal year and continue narrowing over the next few years, its debt burden will remain around current higher levels in the absence of stronger fiscal consolidation measures.

The agency highlighted that the rise in global prices of energy, fertiliser and food would significantly impact Rwandaʼs inflation since food- and energy-related items make up 46% and 26% of the countryʼs consumer price index basket. Moodyʼs expects CPI inflation in Rwanda to remain high over the rest of 2022 after accelerating to about 10% year-on-year in April and an average of 7-8% in 2022. Higher prices pose a challenging tradeoff between prioritising social welfare and stability, and fiscal consolidation, according to Moody’s. Social support remains a key part of the governmentʼs policy agenda, evident in the governmentʼs proposed budget for fiscal 2023, with total budgeted expenditure rising 5% from already elevated budgeted levels in fiscal 2022. This raises the risk of fiscal slippage from an already weakened starting point.

From a financial market perspective, the takeout from the Moody’s sovereign credit rating update is bearish for Rwandan bonds. Continued fiscal slippage against the backdrop of mounting inflation pressures suggests that the topside bias in Rwandan bond yields is likely to persist in the months ahead.

The African Exchanges Linkage Project (AELP) has made its way back into headlines after the Botswana Stock Exchange, and Ghana Stock Exchange joined the project at the end of May. The AELP aims to facilitate cross-border trading from one African securities exchange to another to integrate African capital markets. ASEA President Edoh Kossi Amenounve recently said that the facilitation of cross-border trading would open up the markets to a diverse portfolio and investment opportunities.

Kossi Amenounve added that brokers and investors would be able to access a variety of asset classes available in their markets of interest. Increased and regular cross-border trading is expected to enhance liquidity in the member exchanges. Illiquidity remains a key issue for many African stock exchanges, given that financial markets are in many countries still in their development stages. The linkage of Africa's largest and most liquid securities exchanges could boost liquidity and draw in more international investors.

That said, there are still some shortcomings of the project that are yet to be addressed. The AELP will not directly ameliorate some factors hindering African capital markets, including high transaction costs and difficulties in repatriating foreign currency. History shows that the more liquid a market is, the lower the costs of transactions. In a liquid stock market, the market can absorb large trade volumes with minimal effect on price movement.

The inclusion of the two exchanges is a sign that capital markets in Africa are becoming more integrated. This should help with liquidity constraints and encourage cross-border trading and movement of capital. There is now a total of 9 member stock exchanges. The member countries are Botswana, Ghana, South Africa, Morocco, Egypt, Kenya, Nigeria, Mauritius and the WAEMU Region (Benin, Burkina Faso, Côte d’Ivoire, Guinea-Bissau, Mali, Niger, Senegal and Togo).