After initially showing signs of selling off on Friday, the USD recovered to remain well within its recent trading range. On Friday, the sell-off against the USD on news of more UK political turbulence was not sustained. Speculation around the outlook for the Chancellor and fiscal policy has been replaced by speculation around PM Truss’ tenure, as reports circulate that the party is looking to replace her too. It is an unusually tumultuous time in UK politics and one that has weighed on the GBP. This week will be key for the Truss administration. If the installation of Jeremy Hunt as the new Chancellor stabilises markets, Liz Truss may be granted one final reprieve and more time. If the volatility persists, the conservatives may look to replace her due to her perceived lack of credibility. All eyes will therefore be on the GBP and UK Gilts that may be forced to operate without the support of the BoE. The USD is trading back within its familiar range, leaving the EUR to trade at 0.9745 this morning, while the GBP is consolidating around 1.1245.

UST futures are marginally bid this morning as the Gilt market stabilizes as traders see the potential that more of UK PM Truss’s tax cut pledges will be reversed. However, US yields are still elevated, with the 2yr trading just shy of 4.500% following more hawkish commentary from Fed officials that rates are still to be hiked quite aggressively. Over the weekend, key Fedspeaker Bullard suggested that the Fed could hike by 75bp at the next two meetings, while keeping the door open for an even larger cut at the next FOMC meeting.

Egypt: Speaking on Friday, International Monetary Fund Chief Kristalina Georgieva said that the lender is close to agreeing on a new loan to Egypt. The IMF Chief was quoted as saying, "We have resolved the big issues. It is really at the finish line to be crossed virtually within days." Georgieva told a news conference that the two sides were still working on smaller technical details, but these were not trivial matters and involved Egyptian exchange rate policies. Meanwhile, Finance Minister Mohammed Maait also said that authorities are in the final stage of negotiations with the fund, and he expects his country to sign an IMF deal "very soon." Egypt has sought the IMF's assistance to shore up an economy hit by Russia's invasion of Ukraine, which has led to higher commodity prices this year and weighed on the country's tourism revenues.

Ethiopia: As part of measures to preserve dwindling foreign exchange income, the central bank of Ethiopia has indefinitely banned the importation of 38 types of goods, including vehicles, alcoholic beverages and cigarettes. Deputy Governor Fikadu Digafe told reporters that banks have been ordered not to issue letters of credit for the goods. A scarcity of dollars is fuelling inflation in Ethiopia and in countries such as Ghana and Nigeria. Tighter global financial conditions have triggered an outflow of foreign exchanged and weakened their domestic currencies.

Kenya: On Friday, Kenya's Energy and Petroleum Regulatory Authority cut the fuel prices for the first time in 12 months on lower crude costs. The retail price of gasoline was lowered by 0.6% to KES 178.30 per litre, while diesel prices were brought down by KES 2 to KES 163 per litre. Kerosene was reduced to KES 146.94 per litre. Meanwhile, the subsidy of KES 18.15 per litre was retained for diesel and KES 27.47 per litre for Kerosene. The reduction in fuel prices will likely ease some inflation pressure in Kenya. Note that fuel prices rose to a record high in September after remaining unchanged at KES 159.12 per litre for three months.

Morocco: Reports quoting a source close to the matter suggest that Morocco may scrap a bond market return and draw instead on its credit line with the International Monetary Fund as the government looks for a cheaper way to repay debt maturing in December. The source added that Morocco is considering tapping around $1bn from the Washington-based lender because the surging cost of dollar debt has made borrowing unattractive this year. Tighter global financial conditions have made it difficult for many frontier sovereigns to access capital markets this year.

Rwanda: Central Bank Governor John Rwangombwa is optimistic that prices pressure in Rwanda will begin to ease over the next few months, despite the inflation rate accelerating by more than expected to its highest level in more than a decade in September. Rwangombwa forecasted inflation slow to around 16% by year-end and added that the bank remains committed to returning inflation to within the target band of 2%-8%. In September, the Monetary Policy Committee maintained its average inflation forecast for 2022 at 12.1%. It expects the rate to revert to within its target range in the second quarter of next year. According to Rwangombwa, revised forecasts will be given when the panel meets again in November.

Sub-Saharan Africa: In a poll conducted by Reuters, key Sub-Saharan economies are expected to experience tepid economic growth in 2023 amid sticky inflation and as the dollar's strength drives up import costs, undermining hawkish monetary policy. The poll showed that growth for the sub-Saharan Africa region is projected to slow to 3.4% this year from last year's estimate of 4.7% but then edge up to 3.7% next year, in line with the recent International Monetary Fund forecasts. 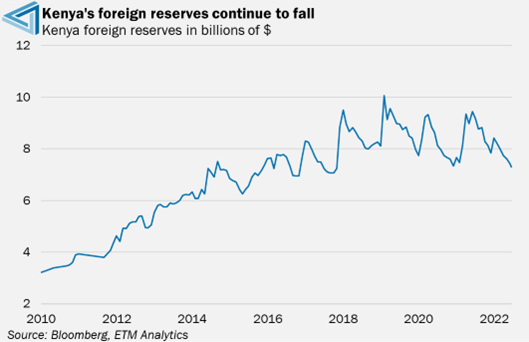 Pulling back the lens, Kenya’s foreign exchange reserves have fallen by more than 17% since the beginning of the year. Foreign exchange reserves have, in part, come under pressure due to the CBK selling dollars to slow the rate of depreciation of the Kenyan shilling. The currency has lost almost 7% against the dollar on a year-to-date basis and closed at a fresh low on Friday. The shilling has been pressured by a widening current account deficit, high oil prices, and hard currency demand from sectors including energy and manufacturing, outmatching supply. Moreover, declining farm export receipts amid the worst drought in decades have resulted in reduced foreign currency inflows.

Yields across the Botswanan bond curve have traded higher this year, largely driven by the tightening in monetary policy both domestically and abroad as a result of surging inflation. While data released on Friday showed that inflation slowed in September, inflation remains robust. For context, headline inflation decelerated to 13.8% y/y in September from a multi-year high of 14.6% in August. 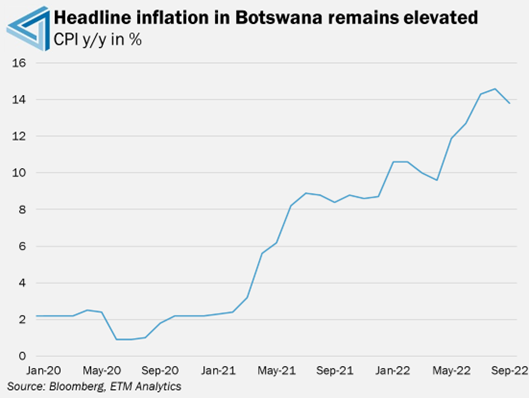 Food prices remained elevated in September, increasing from 13.3% y/y in August to 14.8% y/y. The primary factor that contributed to the lower inflation reading was transport, as global oil prices eased in September. While the Bank of Botswana expects inflation to fall back within its target range of 3% - 6% by the end of the year, risks to the inflation outlook remain acute.

With the Bank of Botswana and major central banks such as the Federal Reserve expected to remain hawkish in the months ahead, we expect the broader bearish bias in Botswanan bonds to persist in the final weeks of 2022.

Macroeconomic: IMF expects growth in Sub-Saharan Africa to slow in 2022

The International Monetary Fund published its Regional Economic Outlook for Sub-Saharan Africa on Friday evening. The IMF said that it expects growth to slow sharply this year from 4.7% in 2021 to 3.6% amid slower global growth, tighter global financial conditions, and volatile commodity prices. The international lender added that it expects growth to remain subdued at 3.7% in 2023. 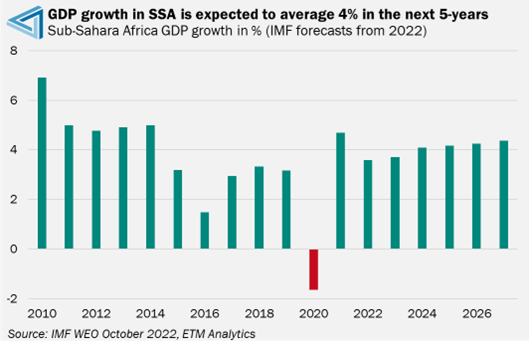 The IMF noted that the economic outlooks differ across the region, depending on country circumstances. Oil exporting countries stand to gain from elevated international oil prices. The IMF added that most other countries, even those that are resource-rich exporters (excluding oil), are expected to suffer a meaningful slowdown in economic growth.

On the fiscal front, the IMF said that public debt has reached almost 60% of GDP, leaving the region with debt levels last seen in the early 2000s. Nineteen out of the region’s thirty-five low-income countries are now at high risk of debt distress or find themselves in a position of fiscal distress. The IMF stated that there is a continued need for public financing firms amid difficult funding conditions for countries. This would require sustained revenue mobilization, a tight focus on critical spending priorities, increasing efficiency wherever that's feasible, and where debts pressures are clearly indicating, pointing to sustainability issues, readily restructuring and reprofiling debt.