Structural reforms required for a meaningful and sustained recovery in Africa

Oil is on course for a fourth monthly gain out of five this year, with demand optimism still generally outweighing any concerns over increased supply as production cuts are eased and talks with Iran progress. The front-month Brent contract is nearing the $70 per barrel mark this morning as a result, while the benchmark WTI contract remains bid after closing yesterday at its highest in more than two years. The start of next month, meanwhile, will bring with it the next OPEC+ meeting. It is expected that the cartel will ratify their agreement to increase output by 840k barrels per day in July, as the returning supply from Iran if it comes, should be absorbed relatively easily. If a nuclear deal is struck with the Middle-Eastern nation, it could put a bit of downward pressure on prices but will unlikely lead to any sustainable downtrend.

Botswana: The highlight of Botswana’s calendar today is the bond auction which takes place at 13.00 local time. The quality of the debt is without question given the country’s credit rating and the yield pick up they offer. Today we will have the following bonds on offer: BWP 200m 4.5% 2023, BWP 300m 5.5% 2027, BWP 200m 7.75% 2031. The last auction on April 30th saw some interesting results. We had robust interest for the 2027 issuance, however the 2031 received a lower total amount of bids than what was on offer and this was true of the 2040 issuance as well, leading to the market receiving much lower allotments.

Mozambique: Southern African leaders said they made progress on finding a lasting solution to resolving the security issues in northern Mozambique, which has led to an evacuation of staff working on the $20bn Total led project in the northern Mozambican province of Cabo Delgado. Moreover, the intensification of insurgent attacks has stoked fears that the insurgency could become a regional issue if not dealt with immediately. Heads of state from the Southern African Development Community met Thursday to discuss a proposed regional response to support Mozambique, according to a statement released after the meeting in Maputo. No further details were provided. Bloomberg reported that the leaders agreed to meet again on June 20 to discuss the matter further.

Kenya: Central Bank of Kenya Governor Patrick Njoroge announced that Kenya is expected to receive a $750mn World Bank loan in the coming weeks. The loan will be used to help finance the country’s budget. The funding comes at the right time as the country has been scrambling to secure money from abroad to plug into its budget deficit before the end of its fiscal year. Governor Njoroge also reported that the IMF is expected to disburse $410mn after completing its latest review, while the African Development Bank is expected to provide €90mn to support Kenya’s economic recovery. Foreign currency inflows in the country will be welcome by the markets. It will help support economic recovery after growth slumped last year due to COVID-19 and boost dollar liquidity, which supports domestic assets.

Egypt: Egyptian President Abdel Fattah el-Sissi was in Djibouti yesterday for talks with his counterpart Ismail Omar Guelleh as part of Egyptian diplomatic attempts to build more African alliances amid the ongoing water dispute with Ethiopia. This visit comes amid escalating tensions between Egypt, Sudan and Ethiopia over Ethiopia’s Grand Ethiopian Renaissance Dam.  Previous negotiations held between these three countries have failed to yield any progressive results

Uganda: Uganda’s statistics agency expects economic activity to expand by 3.3% in the FY2020/21. The agency’s projections are lower than the Finance Ministry GDP forecast of 4.3% in the FY2020/21. Although Uganda’s economic growth is expected to rebound in FY2020/21, it remains low compared to pre-crisis levels as the uncertainty of the pandemic path continues to stifle economic activity.

Sub-Saharan Africa: The World Health Organisation reported that African nations will need at least 20mn doses of AstraZeneca Plc coronavirus vaccines by mid-July to complete the immunisation of people who have had the first dose of the shots. The WHO noted that less than two doses per 100 people have been administered in Sub-Saharan Africa since the first COVID-19 inoculation campaign globally rolled out six months ago. Vaccination programs on the continent have been very slow as countries struggle to access vaccines due to hoarding by wealthy nations and supply shortages. According to the WHO Regional Director for Africa Matshidiso Moeti, a further 200mn doses are needed for Africa to vaccinate 10% of its population by September.

Namibia: Namibian President Hage Geingob and his wife Monica Geingos have tested positive for COVID-19 and are isolating. Coronavirus infections are now gathering pace in Southern African countries as winter approaches. The Namibian Ministry of Health and Social Services reported that the number of current active confirmed COVID-19 infections stood at 3207 on Wednesday, taking the total confirmed coronavirus infections in the country to more than 53.6k. There is a risk that we could see tighter restrictions put in place by governments.

Notwithstanding the rally in copper, which the country depends on for about three-quarters of export earnings, and weakness in the US dollar, the bearish bias in the Zambian Kwacha (ZMW) remains entrenched. The ZMW has depreciated by around 6.00% against the USD since the start of the year, adding to the significant losses seen in 2020. Note that the kwacha is the second-worst performing African currency in 2021, lagged only by the Ethiopian birr (ETB). 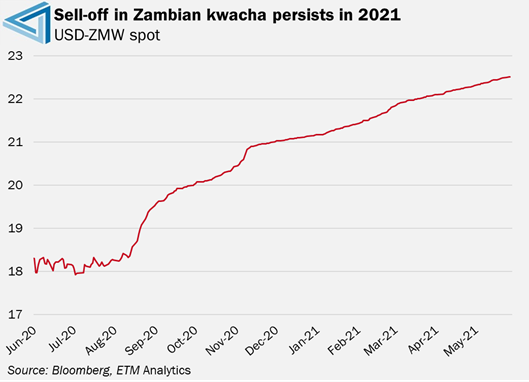 Weak macroeconomic fundamentals, including deep negative real interest rates, are underpinning the persistent weakness in the ZMW. Zambia is grappling with high inflation, which has seen the country’s real rates tumble further into negative territory. Data released yesterday showed that headline inflation accelerated from 22.7% y/y in April to 23.2% y/y in May, its fastest pace of growth in 18 years. As a result of the persistent increase in inflation and the central bank maintaining its policy rate at its current level, Zambia’s real interest rate has plunged to -14.7%.

Declining foreign reserves and heightened fiscal concerns are two more headwinds that the ZMW is facing. Zambia’s real interest rate has fallen to near-record lows leaving the kwacha vulnerable to external shocks. Fiscal dynamics in Zambia continue to deteriorate following the steep contraction in economic activity last year and wider budget shortfalls due to the pandemic. With the government yet to secure funding from the IMF to plug its gaping budget deficit against the backdrop of soaring inflation, which could lead to a situation of stagflation, we see room for further losses in the ZMW in the weeks ahead.

In a statement seen by Bloomberg, Ghana’s Finance Ministry said that it plans to go ahead with the $1bn sustainable bond issuance in July. The Finance Ministry said that the funds from the $1bn sustainable Eurobond issuance would be used to finance domestic debt, environmental and social projects and the government’s Free Senior High School programme.

Deputy Minister of Finance Charles Adu Boahen was quoted as saying, “with this issuance, we’re looking at refinancing those debts already raised to undertake projects in the environmental sectors. Out of all that we will raise with our capital market mandate this year, only $1.5bn is fresh debt, the rest is for refinancing or buyback.”It has been reported that Ghana will contract some of the same transactional advisors it used for the sale of its historic zero-coupon bond sale for the issuance of the sustainable bond. Recall that demand for Ghana’s zero-coupon bond was healthy. 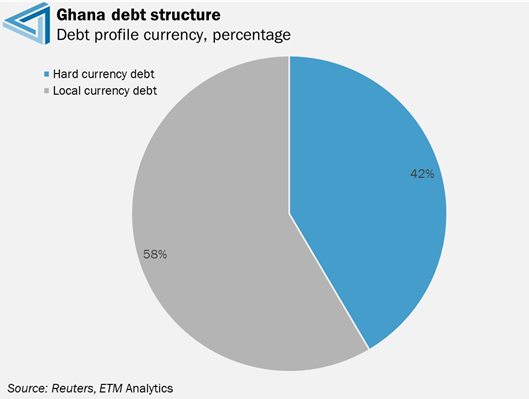 Given the global shift to greener energy and decarbonisation efforts, demand for sustainable investing is robust. This, in conjunction with the already strong appetite for Ghanaian debt amongst investors, points to another good auction for the Finance Ministry, with demand at the auction expected to be robust. Although the funds raised from the auction will help bolster the economic recovery, the Eurobond issuance will undoubtedly add to fiscal concerns amongst investors as Ghana’s foreign debt exposure continues to increase. It is worth pointing out that more than 40% of Ghana’s debt is denoted in hard currency. Therefore, Ghana could face some significant fiscal pressures in the medium to longer-term if the bearish bias in the USD reverses and the Ghanaian cedi comes under pressure.

Macroeconomic: World Bank pledges to help shore up the economic recovery in Africa

The World Bank noted earlier this week that a large portion of this would be through grants and long-term, zero-coupon interest rate loans. This will provide strong foreign currency inflows into Africa over the next couple of years, which will not only help support economic recoveries but will also provide some additional reprieve for African currencies. President of the World Bank David Malpass said that the $150bn pledge is critical to providing concessional financing and grants that Africa urgently needs.

On balance, while the financial and vaccine support should help shore up the pace of economic recovery in Africa, most African countries still face major structural economic impediments that need to be resolved through the implementation of reforms before a significant recovery can unfold. Africa’s two largest economies, Nigeria and South Africa, are two such countries that need to roll out growth support reforms before a meaningful and sustained recovery can be expected. The World Bank said that economic growth in Sub Saharan Africa is forecast to rise between 2.3% and 3.4% in 2021, depending on the policies adopted by countries and the international community. We see some of the strongest recoveries in the region coming from East Africa.