The USD appears to be consolidating ahead of the release of the all-important US CPI. Given the potential impact a surprise in the CPI data could have on markets, it is not surprising that traders are sitting back ahead of the release. It is expected that inflation accelerated to 8.8% y/y in June, which, if confirmed by the actual print, would mark the largest jump in 40 years. Another strong inflation reading would bolster bets for the Fed to deliver another 75bps hike on July 27, further widening the monetary policy differential between the US and other major economies. While the bullish bias in the USD has tempered ahead of the US inflation data, the G10 currency complex is a sea of red this morning. Emerging market currencies are also mostly weaker against the USD ahead of the European open. Directionality in the FX market is expected to stem from the US CPI print today.

Oil prices plunged yesterday, with both the Brent and WTI front-month contracts dropping below $100 per barrel. Escalating recession fears continue to move through the markets and have dragged most commodities lower, with even oil unable to escape despite the supportive supply side of the equation. The weakening macro picture is driving the market at the moment and this may continue over the next few days, given the release of the US CPI figures and Fed Beige Book today, which will likely affirm that the US is hiking rates into a global economic slowdown.

Africa: International Monetary Fund Managing Director Kristalina Georgieva said creditor committees for Zambia, Ethiopia, and Chad's debt restructurings are expected to meet within the next ten days. Georgieva added that a positive outcome from the negotiations was crucial for Chad, Ethiopia, and Zambia “and to energize other countries to step forward” to seek restructurings. After slow progress over the past 18 months, the IMF, the World Bank, and others are pushing China and private creditors to accelerate work on debt treatments sought by Ethiopia, Chad, and Zambia.

Ethiopia: A Reuters report quoting a source familiar with the matter has indicated that Ethiopia’s creditors’  committee will meet on Monday. The committee co-chaired by France and China first met in September last year. Still, progress on debt relief for Ethiopia has been complicated by a 20-month insurgency that started in the northern Tigray region. The meeting is a step in the right direction and moves Ethiopia closer to restructuring its debts under a common framework set up by the G-20 economies.

Uganda: An official from the Uganda National Oil Company yesterday said that debt financing for Uganda’s $4bn crude export pipeline might start next quarter. The loans are expected after two years of negotiations and will be deployed when lenders agree to use debt and equity simultaneously. The official added that lenders, including export credit agencies, insurance groups, development finance institutions, and all commercial banks across the continents, oversubscribed funding by 20%. The world’s longest heated pipeline will be funded on a 40% to 60% equity-debt ratio and will move land-locked Uganda’s oil to international markets generating huge foreign exchange inflows though some will be held back for local refining when Uganda starts production in early 2025.

Zambia: Speaking yesterday, Finance Minister Situmbeko Musokotwane said that Zambia would likely meet for a second time with its creditors this month in an attempt to resolve the country’s debt crisis. Musokotwane added that negotiations had been slow due to a large number of creditors. Zambia is seeking debt relief on more than $17bn in external debt, and financing assurances from creditors will allow the country to finalize a $1.4bn program from the IMF. Musokotowane also emphasized the need for fair treatment amongst creditors, saying “there should be equity in the manner I pay all the creditors. You must bring everybody together and ask what should be the formula to use so that everyone feels they are being treated equally in the debt restructuring process.”

Nigeria: Data from the Nigerian Upstream Petroleum Regulatory Commission showed that Nigeria’s oil production, including condensate, dropped by 14.3% y/y to 1.4mn barrels per day in the first half of 2022, from 1.6mnbpd in the corresponding period of 2021. The oil output also dropped month-on-month by 23% to 1.3mbpd in June 2022, from 1.7mbpd recorded in the preceding month. The slowdown in oil production can be attributed to the increased pipeline vandalism, oil theft, and illegal refining in the Niger Delta. Low production has meant Nigeria is unable to benefit from higher than normal oil prices, thus depriving it of much-needed foreign exchange to boost its reserves and improve the dollar supply in the economy.

South Africa: The latest NT data showed that foreign ownership of SAGBs fell to 27.4% in June from 28.1% in May, marking the weakest reading since June 2011. As market volatility picks up amid headwinds such as inflation and rate hike bets and investors become a little more judicious on foreign exposure, risks exist that we could see demand for SAGBs struggle to rebound, weighed down by foreign demand.

It has been a sea of red in the East Africa FX complex this year, with most currencies in the region recording losses against the USD. Tightening financial conditions and elevated oil and food prices have weighed heavily on the current and trade accounts of countries in the region and added downside pressure to currencies. The Kenyan shilling has been no exception to this broad-based weakness, losing over 4% on a year-to-date basis. 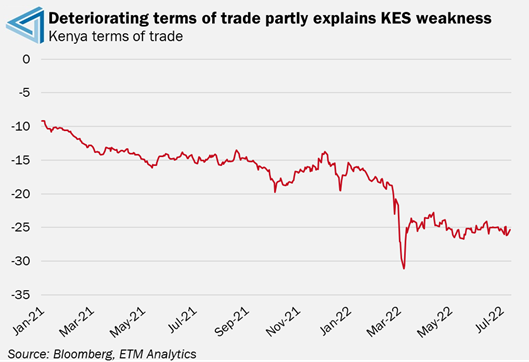 Provisional data out of Kenya shows that the current account deficit widened to 5.3% of GDP in the 12 months through May 2022 from 5.0% of GDP in the 12 months to May 2021. According to the Central Bank of Kenya, the wider deficit reflects a higher import bill, particularly for oil, which more than offset increased receipts from agricultural and services exports and remittances.

While the selling pressure on the Kenyan shilling has moderated at the start of the week as a slowdown in economic activity ahead of the elections next month reduces dollar demand, headwinds facing the shilling are acute. A growing external imbalance and limited foreign exchange inflows amid an unfavourable global macro backdrop are some of the factors that are weighing on the currency, which remains significantly overvalued on a real effective exchange rate basis.

While African Eurobonds were remarkably resilient throughout much of the pandemic era, the resilience has faded since the global shift in monetary policy in September 2021. The inflation crisis, brought on by the reopening of economies after months of strict lockdown and supply chain issues, has prompted central banks around the world to hike rates aggressively after years of loose monetary conditions. While emerging market central banks were the first to tighten policy in the wake of the pandemic, it was the shift from the Federal Reserve that triggered the start of the downfall of African Eurobonds. 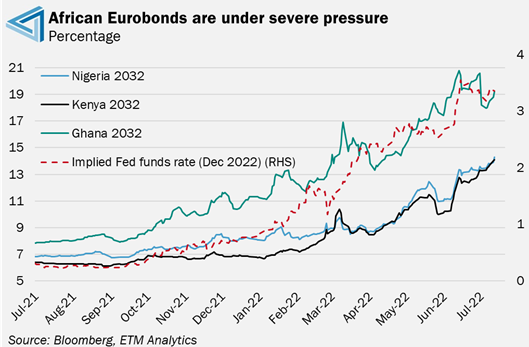 As can be seen in the accompanying charts, the sell-off in African bonds began in September 2021, which coincides with the hawkish pivot from the Fed as inflation in the US started to run hot. Since its initial pivot, the Fed has turned increasingly hawkish as inflation proved to be more resilient than policymakers had anticipated. The Fed has shown that it is committed to reining in inflation by hiking the Fed Funds Rate by 150bps since March, taking it back to levels last at the onset of the Covid-19 pandemic. While global recession fears are intensifying, the US rates market seems undeterred, with traders pricing in an implied Fed funds rate of 3.36% by the end of the year.

As traders have scaled up interest rate hike bets in the US, so African bond yields have surged. Since September last year, Ghana’s 2032 Eurobond yield has more than doubled, climbing by more than 1000bps to 19.21%. The comparable Kenyan and Nigerian Eurobond yields have also skyrocketed, increasing by 798bps and 757bps to 14.11% and 14.31%, respectively. A correlation analysis shows that there is almost a perfect positive relationship between African Eurobond yields and implied Fed fund rates. As of yesterday, the correlation stood at 0.97. Therefore, this could be a great algorithmic pairs trade.

Global inflation has continued to accelerate despite the recent correction in international oil prices. The World Economy Weighted Inflation Index has continued to trend higher, climbing to 9.52% this month, as supply chain pressures persist. Inflation in Africa has also quickened in recent months as supply-side cost pressures increase. Weaker exchange rates have also contributed to the acceleration in inflation in Africa. 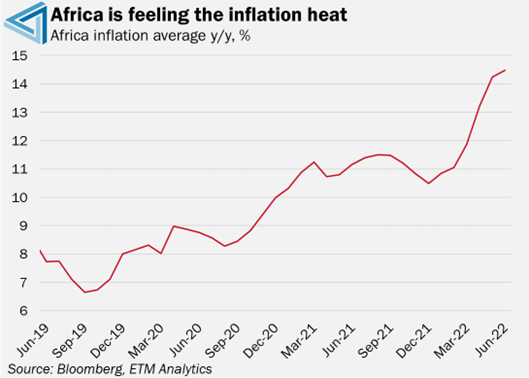 A breakdown of the data shows that the most significant acceleration in headline inflation has been in Ghana, with annual inflation rising from an average of 9.9% over the past two years to 27.6% in May. The sharp acceleration in consumer price growth in Ghana can in part be attributed to the aggressive depreciation in the cedi, which has lost more than 30% against the USD this year.

While oil has dipped below $100/bbl, international oil prices remain elevated when compared to levels seen last year. Moreover, if OPEC expectations are anything to go by, oil prices are expected to remain elevated in the coming months. In a report released by OPEC yesterday, the group said that global demand expectations for 2023 have revised higher. Supply-side issues are expected to persist for now.

Most African countries are net importers of oil. Therefore the risk of high oil prices suggests that inflation is likely to remain high in the coming months. One of the other main drivers of inflation within Africa is high food prices. Similar to oil, while international food prices have edged lower in recent months, relative to historical levels, food prices are elevated. The acceleration in inflation in Africa has resulted in many central banks hiking interest rates in an attempt to get inflation under control. From a growth perspective, high inflation and subsequently high interest rates threaten growth prospects within Africa. Therefore, central banks will have to play a delicate balancing act of reining in inflation while not putting too much pressure on their respective economies, which are still recovering from the devastating effects of the Covid-19 pandemic.