Tactical gold shorts used the United Nations report released yesterday as the anchor to push the yellow metal lower. The United Nations forecast the global economy making its fastest recovery in nearly 5 decades with global GDP for 2021 pencilled in at 5.3% assisted by radical policy interventions and vaccine rollouts in developed nations. Looking ahead, the next Fed meeting on 21-22 Sept will be crucial for investors to get a handle on the timing of the Fed taper to which all asset prices are currently trading off. A more hawkish tone regarding monetary policy will take the shine off gold in the short to medium term and have a bearing on the noble metals as well given their use in industrial applications.

China announced this morning that it will be selling more copper, aluminium and zinc from its reserves, NDRC official Li Hui stated at a press conference this morning. This would be the third tranche of sales from the state reserves which is aimed at stabilising prices following sharp spikes to the topside across the base metal complex. The Chinese property sector is also in the spotlight this morning with a debt crisis at one of the country’s top developers, namely the Evergrande Group, threatening a number of huge projects which will curb the need for metals as these projects grind to a halt.

Egypt: The Central Bank of Egypt is today set to deliver its latest verdict on its interest rates. The CBE is likely to leave its overnight interest rate unchanged at the meeting even as inflation ticks upwards amid rebounding economic growth. After cutting the benchmark by 400 basis points last year, the central bank will be looking to maintain the differential between key policy rates and inflation that's the highest among more than 50 economies tracked by Bloomberg. The ranking makes Egyptian debt a favourite among emerging-market investors.

Botswana: Botswana Statistics Agency released the CPI reading for August yesterday. The August print came in at 8.8% after recording 8.9% in July 2021. The largest contributor to the topside for inflation came from the transport category which added 4.6%, while housing, water, electricity, gas and other fuels rose by 1.4%. Trimmed mean core inflation for August came in at 8.3% which was a drop of 0.1% on the previous month. The number will be welcomed by policymakers who have consistently stated that they are looking through the inflation spike and view it as temporary. The bank has played a central role in providing a backdrop which enables growth, but at the same time ensures price stability. At present we see the bank favouring the economic growth part of the equation as the economy aims to right itself following the hard lockdowns associated with the COVID-19 pandemic.

Kenya: According to the National COVID-19 Vaccine Deployment Plan published by the Ministry of Health, Kenya is set to establish a fill-and finish facility for coronavirus vaccines ahead of setting up a full-scale manufacturing plant to guarantee supply. Fill-and-finish facilities enable third parties to put ready-made vaccines into vials, seal and pack them for distribution. In the plan, the ministry said that it "aims to start local production during the first quarter of 2022 and have a fully-fledged human vaccine manufacturing capability by 2024."

Nigeria: Headline inflation in Nigeria printed in line with consensus expectations slowing for a fifth straight month to 17.0% y/y in August from 17.4% y/y the month prior. One of the biggest contributors to overall inflation in Nigeria, food prices, slowed to 20.30% from 21.03% in July. While inflation slowed further and will likely lead to policymakers leaving rates on hold on Friday, headline CPI remains buoyed above the central bank's inflation target rate of 9%. That said, Governor Emefiele has said that the declining inflationary trend reflects measures implemented by the government, and going forward, the pace of inflation is expected to fall further as Nigeria approaches the harvest season.

West Africa: West African leaders are set to meet today in Accra to discuss Guinea's transition back to constitutional rule following the September 5 coup. The Economic Community of West African State, which had already threatened to impose sanctions on Guinea, is holding a second summit after an elite army unit overthrew President Alpha Conde. According to Ghana's Foreign Affairs Minister, several heads of state will convene to share "their expectation of a civilian-led transition" and discuss the timeline within which they would want that to happen.

Zambia: The Ministry of Mines and Minerals yesterday reported that Zambia's copper production dropped 4% in H1 2021 as some miners struggled with operational disruptions. Specifically, from January to June, production fell to 393,114 metric tons from 407,807 tons produced in the same period last year. Miners operating in the Copperbelt province, which includes Konkola Copper Mines and Glencore PLC's Mopani Copper Mines, accounted for around 34% of the country's total output after suffering output losses. A workers' strike affected production at Konkola Copper mines for several days in March, piling more pressure on the assets that have been a subject of an ownership dispute between the government and London-listed Vedanta Resources PLC since 2019. The overall drop in production is likely to dampen Zambia's prospects of raising copper output above 900,000 tons this year. Note that the country is banking on recovering copper production and stability in the mining sector to rejuvenate its economy.

Forex: Remittance inflows into Egypt surge to a record high, adding to the tailwinds for the EGP

A large contributor to hard currency flows into Egypt is remittance inflows. Given the impact of remittance inflows on the currency market, it is worth looking at the latest data published by the Central Bank of Egypt on Wednesday. Remittances from Egyptians working abroad rose to a record high of $31.0bn in the 2020/21 fiscal year. The full-year figure climbed from $27.8bn in the 2019/2020 FY. June remittances came in at $2.9bn vs $2.6bn the year before. 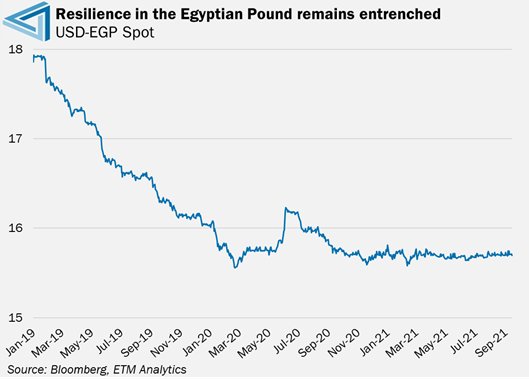 The CBE added that Egypt’s foreign currency reserves hit $40.61bn at the end of July, compared to $40.58bn at the end of June this year. At current levels, Egypt’s reserves are adequate to shield the economy and the Egyptian pound from external shocks. Moreover, elevated reserves and rising remittances have in part contributed to the EGP’s resilience on the year so far. The EGP is up by 0.16% on a year-to-date basis against the USD and is ranked 8th out 20 African currencies tracked by Bloomberg.

In addition to the abovementioned factors, it is worth noting that the CBE’s prudent policy stance, which has seen Egypt maintain one of the most competitive real rates globally, has also supported the EGP. For context, Egypt’s real rate (Policy – CPI) currently stands at 2.55%. Note that Egypt’s high real interest rate bolsters Egypt’s appeal as a favourite carry trade destination for international investors. With the CBE expected to maintain a prudent monetary policy approach throughout the year and remittance inflows at record high levels, the EGP is likely to remain resilient for the foreseeable future.

As is the case with almost all African countries, Kenya’s fiscus has taken a beating over the past year and a half. The pandemic triggered the deployment of emergency spending to bolster the health care system and cushion households and businesses from the devastating economic impact of the measures put in place to curb the spread of the virus. This came against the backdrop of a slump in government revenue, resulting in a widening in the government’s budget shortfall and a sharp rise in debt.

It must be noted that the fiscal slide over the past year comes on the back of a persistent degradation in Kenya’s fiscal position over the past ten years. The extent of the fiscal degradation was unpacked in a presentation by the Central Bank of Kenya to the Senate Committee on Finance and Budget on Wednesday. The central bank pointed out that Kenya’s total debt rose from 40% of GDP in the 2011/12 fiscal year to more than a two-decade high of 69% of GDP in the 2020/21 fiscal year. Prior to the onset of the COVID-19 pandemic, the sustained increase in Kenya’s debt was driven largely by infrastructure spending. 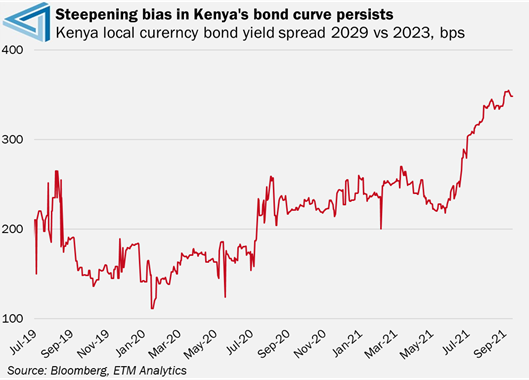 Going forward, Kenya’s debt trajectory remains tilted firmly to the upside amid ongoing infrastructure spending, worsening terms on new loans and still lacklustre tax revenue collection. Given the marked deterioration in Kenya’s fiscal dynamics and expectations for the central bank to remain pat on hiking rates, the Kenyan bond curve has come under some significant steepening pressure in recent months. For context, the spread between Kenya’s local currency 2029 bond yield and the shorter-dated 2023 bond yield has widened by 114bps since the start of June to sit at 348bps at the time of writing. Going forward, given the government’s commitment to infrastructure spending, we expect fiscal risks to remain elevated and, as such, the steepness in the curve to persist. This is of course unless we see the adoption of more prudent fiscal policy.

Given the sensitivity of financial markets to monetary and growth dynamics at the moment, all eyes were on Ghana’s Q2 GDP report on Wednesday. Economic activity in Ghana continued to rebound in the second quarter of 2021. Data released on Wednesday showed that GDP in Ghana grew by 0.9% q/q in Q2. On an annual basis, economic activity accelerated from 3.1% y/y in the first three months of the year to 3.9% y/y in Q2. Given the distorting base effects of 2020, we advise investors to pay more attention to the q/q figure.

Details from the GDP report revealed that the recovery was underpinned by strong growth in the services sector amid the easing of lockdown restrictions. According to the statistics agency, the services sector accounted for 50% of all economic growth in Q2. Hotels and restaurants in particular performed exceptionally well in the period. 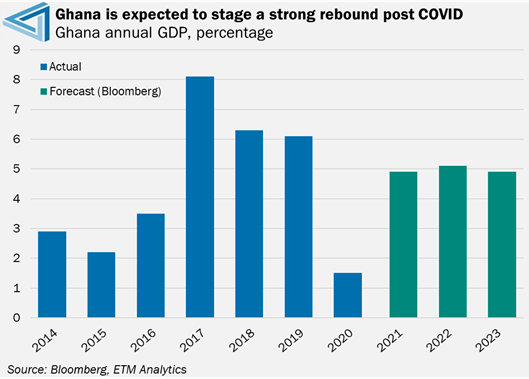 Looking ahead, while there are still a number of downside risks to the outlook, including the slow pace of vaccines, Ghana remains on a path of economic recovery after suffering its first recession in more than a decade in 2020. Ghana’s economy is forecast to expand by 4.9% in 2021, supported by the reopening of the economy and elevated metal and oil prices.