This week, the race for Nigeria's February 2023 elections takes the spotlight, with the ruling party, the APC, having selected the party's national leader, Bola Tinubu, as its presidential front-runner. However, the killing of over 50 people in a church in the southwest of Nigeria (a rare attack in the region) highlights how unsuccessful the outgoing Buhari regime has been in its fight against terrorism and harms the APC’s chance of success.

On the macroeconomic front, Nigeria announced it will halt its plans for a US$950mn eurobond issuance, as market conditions are unfavourable. This implies more local borrowing to finance the wide 2022 fiscal deficit and higher local yields (which is good for Nigeria's banks). Meanwhile, a mixed bag of data illustrates Nigeria’s fragile external position, with FX reserves dropping to an eight-month low, despite record-high oil prices.

We also take a look at GTCO’s recent approval to play in the payments fintech space (competing with Paystack and Flutterwave) and the sluggish progress of the Nigeria-Morocco gas pipeline project, at a time when speed is crucial.

Nigeria’s finance minister has announced that the government will scrap plans for eurobond issuance in June (announced in April) due to unfavourable market pricing and missed approval deadlines. The US$950mn issuance from Nigeria would have been the last international bond from the 2021 budget, after the authorities issued US$1.25bn in March this year. The announcement comes only a few weeks after the Ivorian government canceled its US$1bn international bond plan, for similar reasons.

The cancelling of the eurobond comes as no surprise to us – we had predicted in a recent note that the state of global markets, rate hikes and the stronger dollar could see more sovereigns opt for local borrowing rather than international market issues.

But this means the federal government will have to fund the bulk of the NGN7.4tn (US$17.6bn) projected budget deficit for 2022 through local borrowings (via treasury bills and bonds).

Higher interest rates have both positive and negative effects on banks, but, for Nigeria, it is broadly positive as the credit system is not over-heated – banks are broadly net long in FX assets, etc.

The trade balance turned positive in the quarter, after two consecutive negative quarters, thanks to higher oil prices supporting exports. The trade surplus printed at US$2.9bn compared with -US$410mn in Q4 21 and -US$4.6bn in Q1 21. That said, it is still below the pre-2020 quarterly average of US$2.6bn.

Nigeria’s external position remains fragile, despite the favourable increase in oil prices. Foreign reserves stand at US$38bn (the lowest figure since October 2021), and the naira exchange rate and wide margins show the battle for a stable FX regime is far from over. 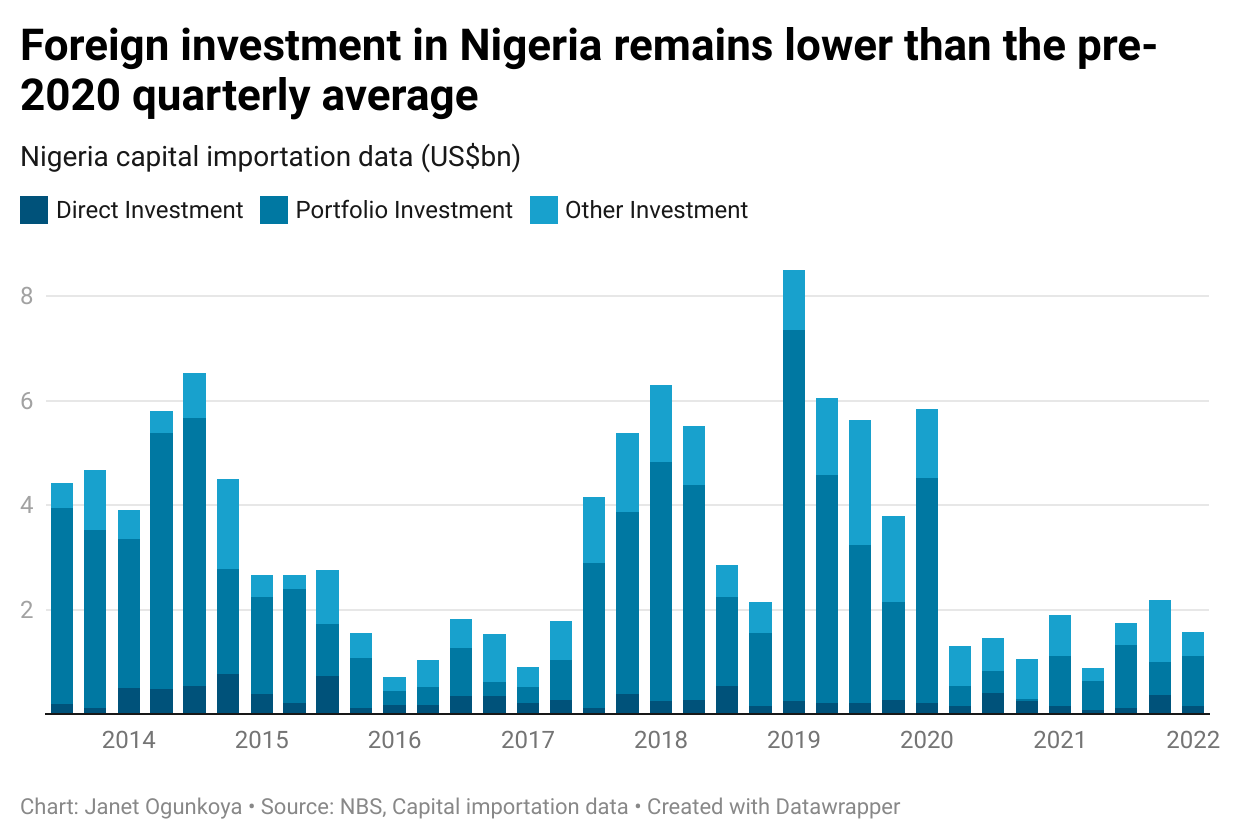 In its primaries, the ruling APC has picked its national leader, Ahmed Tinubu, as its presidential candidate for the February elections. Tinubu defeated current Vice President Osibanjo and others by a landslide.

The major party primaries are now complete and the stage is now set for 2023, with Tinubu (APC – southwest), former vice president Atiku (PDP – north) and the underdog, Peter Obi (LP – southeast), as popular candidates, although recent setbacks have hit the LP, with brewing disagreements over the appointed presidential candidate.

The outcome of the 2023 election is very important given the dire economy and, in particular, the worsening security situation. On Sunday, over 50 people were killed in a rare terrorist attack in the southwest, showing that insecurity is spreading beyond the north.

There has been limited progress, if not outright backsliding, on outgoing President Buhari’s promises to fix the security and corruption problems, with Nigeria continuing to rank very poorly on global peace and corruption scorecards during his tenure, increasing the pressure on the APC ahead of February. 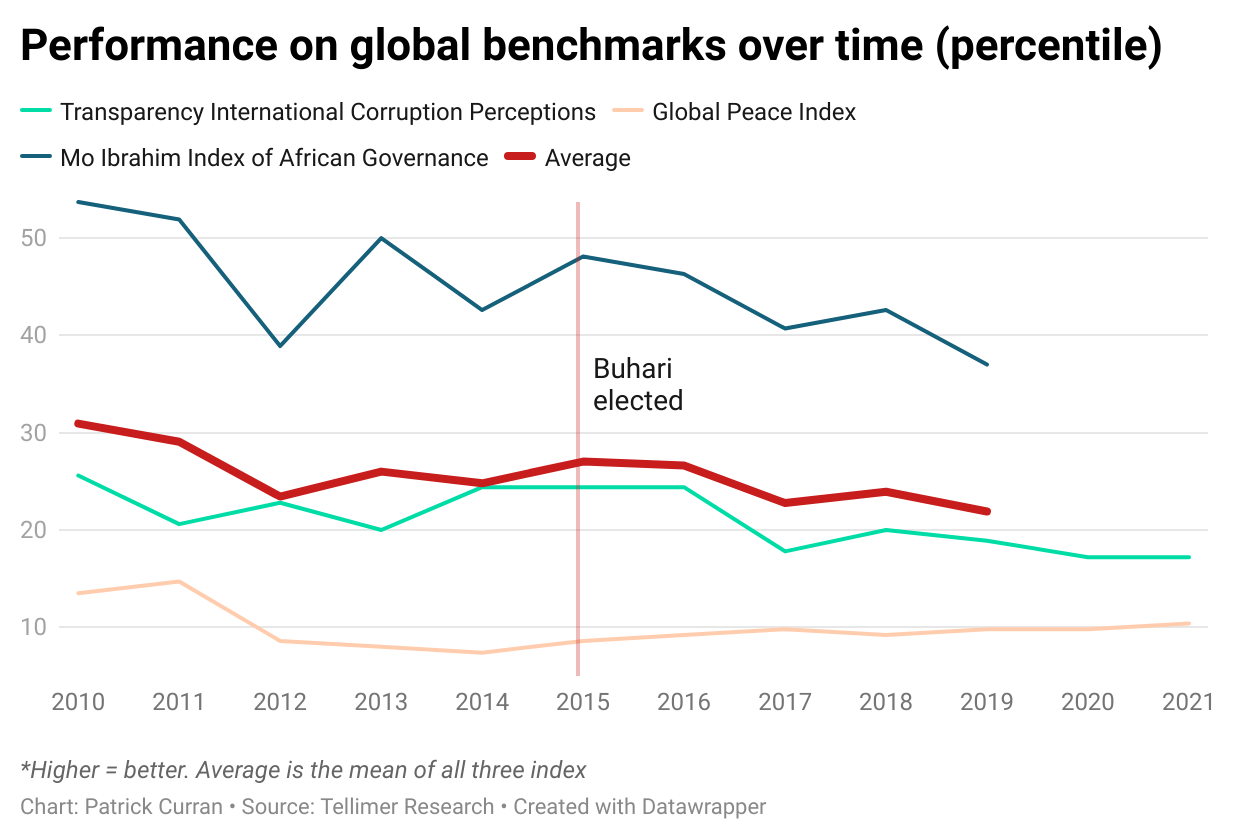 The Nigeria-Morocco gas pipeline crawls forward, but the oil sector needs a sprint

Nigeria’s Federal Executive Council has given approval for the state oil firm, Nigerian National Petroleum Corporation (NNPC) to enter into an agreement with the Economic Community of West African States (ECOWAS) for the construction of the Nigeria-Morocco Gas Pipeline. This would allow Nigeria’s gas to go through Morocco (and 15 West African countries) to Spain and Europe. The initial agreement on the gas pipeline was reached between the Nigerian and Moroccan governments in 2016.

Nigeria’s oil and gas sector is in a dire state, with oil production at record lows, international oil companies exiting and investment in the sector declining. The gas pipeline project could do with more speed, especially given that the country is missing out on benefitting from record-high oil prices.

Moreover, the EU oil ban on Russia creates a market gap that net oil exporters like Nigeria could fill, but it presently cannot due to limited production capacity.

Nigerian banks have had to deal with a changing landscape by looking into fintech and other financial services as new growth engines, especially as fintechs infiltrate the financial services space. Guaranty Trust Holding Company (GTCO) recently restructured into a holdco, reacquired its asset management and pension businesses from Investment One and is now actively building a payments fintech business called Habari. Last week, the CBN granted GTCO the final approval for Habari, making it the first traditional bank to do so.

We expect more banks to follow suit, with the likes of Stanbic IBTC also working to set up its own payments fintech. Given GTCO is among the leaders in retail banking, Habari is likely to give the likes of Flutterwave and Paystack a run for their money. That said, banks struggle to retain tech talent and this has been reflected in their below-par e-banking service delivery – a trend we are also seeing increase in tech companies as valuations tumble (which levels the playing field for banks and fintechs). We believe this, and intense competition, could hamper the potential growth of GTCO’s bank’s fintech business.

PVCs are not just needed to vote, but to gain access to celebrities

In a bid to encourage voter registration and improve participation at the February 2023 elections, Nigerian A-listers are doing their part to ensure everyone registers and collects their permanent voter cards (PVCs). Over the past week, celebrities have made public announcements that, to meet with them, you need your PVC.

The push to ensure voter registration is necessary to improve participation at the February elections. According to the latest statistics, there have been over 10.5mn new registrants since the registration drive began in June 2021, and only c7mn have collected their PVCs. The number is well short of the electoral body’s target of 20mn new registrants before the end of the voter- registration process on 30 June.

The Central Bank of West African States (BCEAO) has appointed Jean-Claude Kassi Brou as its new governor. The central banker will be resigning from his role as chairman of the Economic Community of West African States Commission (ECOWAS). The former governor of the central bank, also an Ivorian, was recently appointed Vice President of Cote d’Ivoire.

The BCEAO regulates the banking sector of eight francophone West African countries – Benin, Burkina Faso, Côte D'Ivoire, Guinea-Bissau, Mali, Niger, Senegal, and Togo – which share a common currency, the West African CFA franc (which is pegged to the euro). Among other key policies, the central bank’s focus has been the push for the new currency, the eco, to replace the CFA franc.

This process has hit a roadblock of economic and political complications. Although the CFA franc benefits from stable monetary policy and lower inflation, the region would prefer to have autonomy and sovereignty over its policies. That said, the use of the eco as a single currency in all of West Africa (some of which is English-speaking and some French), this still seems very far off. We think, though, that some of the value of the transition lies in the process, not necessarily the end goal.

The annual summit of the Africa CEO Forum, in partnership with the International Finance Corporation (a member of the World Bank Group), will be held on 13-14 June in Abidjan, Côte d'Ivoire.

Consumer prices in Nigeria are expected to increase at a faster rate in May. Consensus is for inflation to print higher, at 17.4%, versus the previous month of 16.8%. The higher rate of inflation has been driven by increased food and energy prices and dollar-supply challenges.

Ghana’s economy is expected to grow at a slower rate of 3.8% in Q1, after growing 7% in the previous quarter. The economy faces inflation challenges, fiscal issues and cedi depreciation.

The Nigerian equities market closed negative in the past week, as the all-share index declined 0.83%, bringing the ytd return to 24.5%. Sentiment was broadly negative, with market breadth printing negative, with 41 losers and 34 gainers. Losses in OKOMUOIL, FBNH, CADBURY and AIRTELAF offset the gains in MTNN, which was the major positive mover on the market this week.

Despite this stellar performance so far this year (as we have discussed), we have a negative outlook on the Nigerian equities market as an anticipated increase in domestic bond yields in the coming months and the absence of foreign investors will put a dampener on local participation. 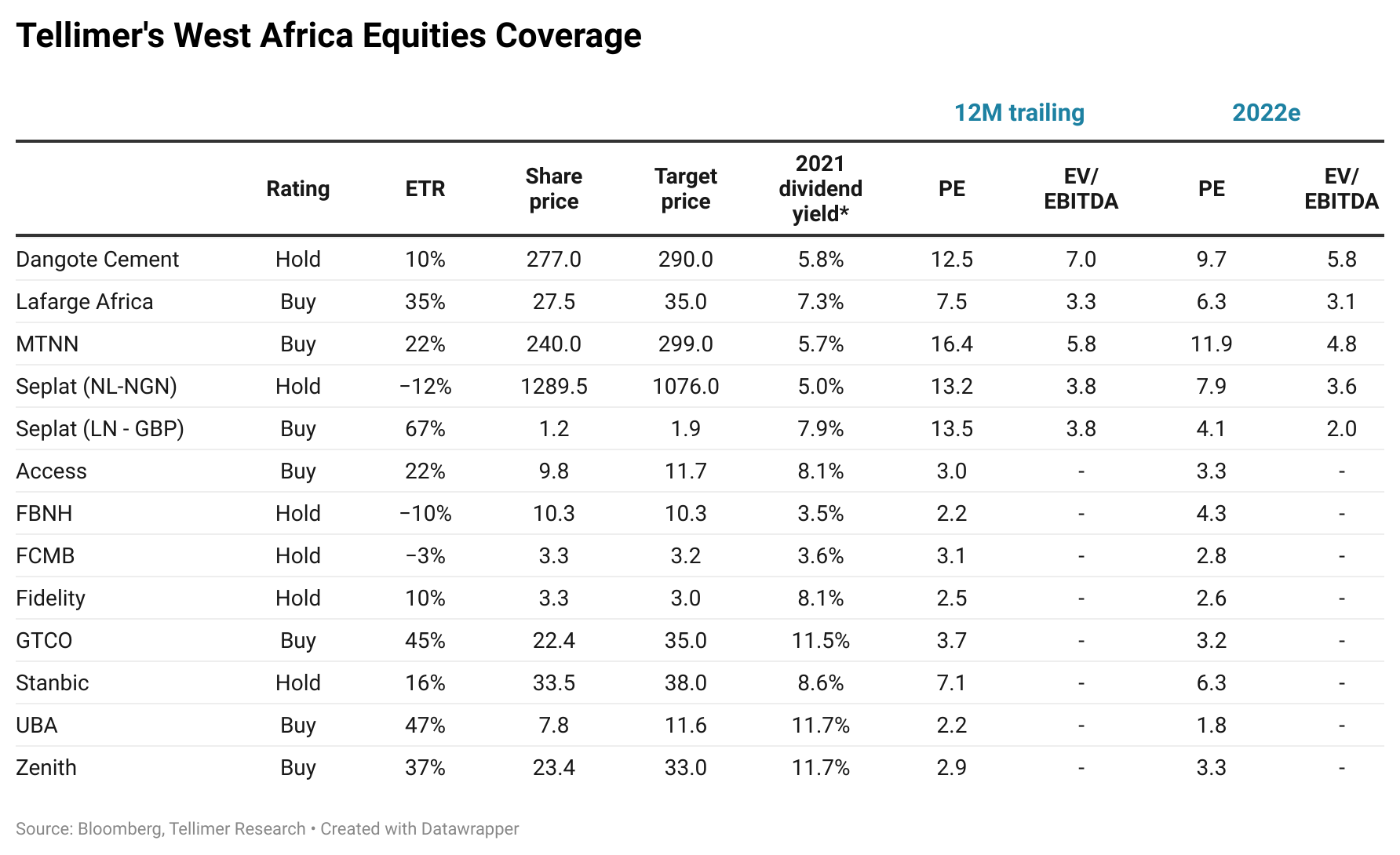 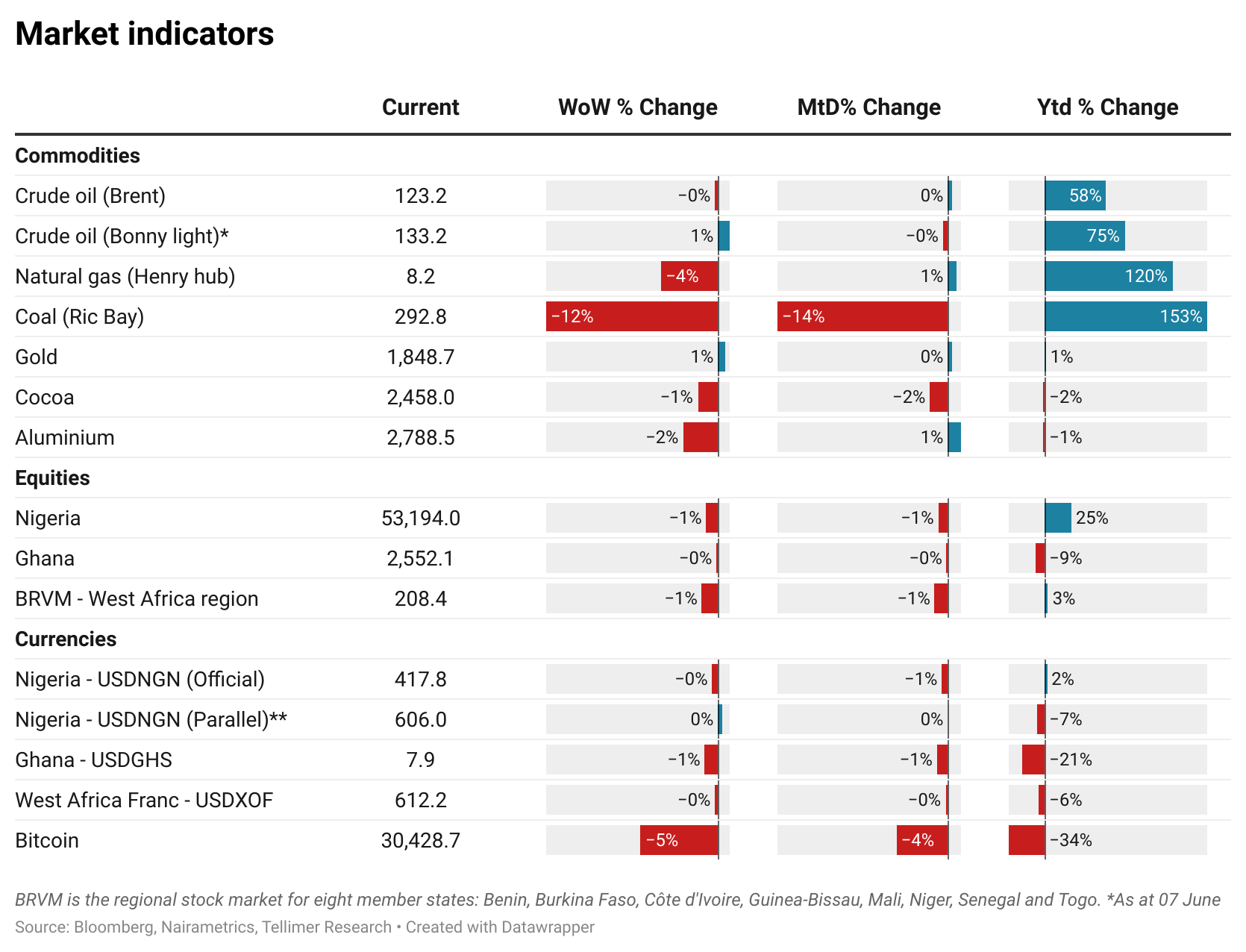 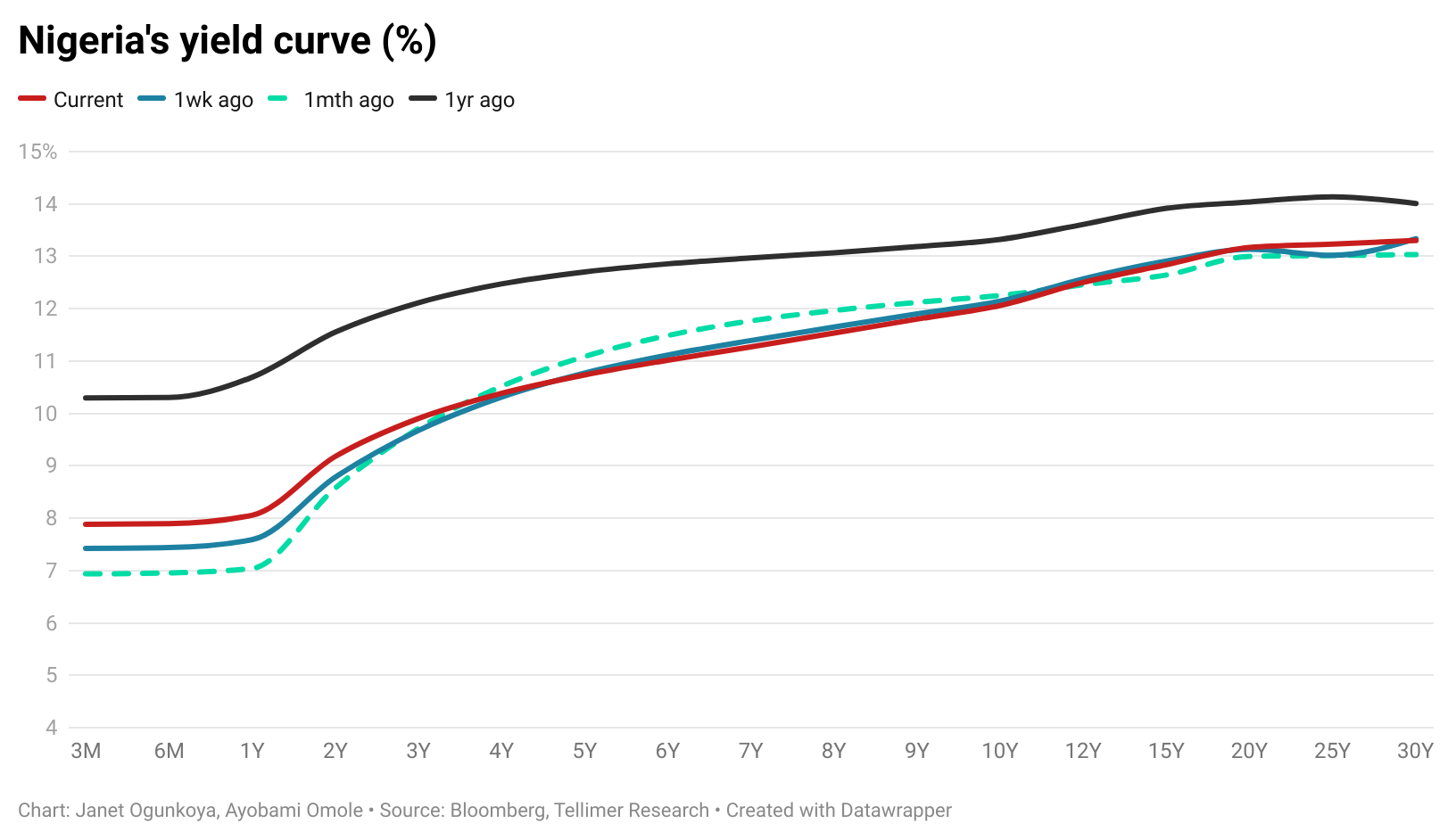 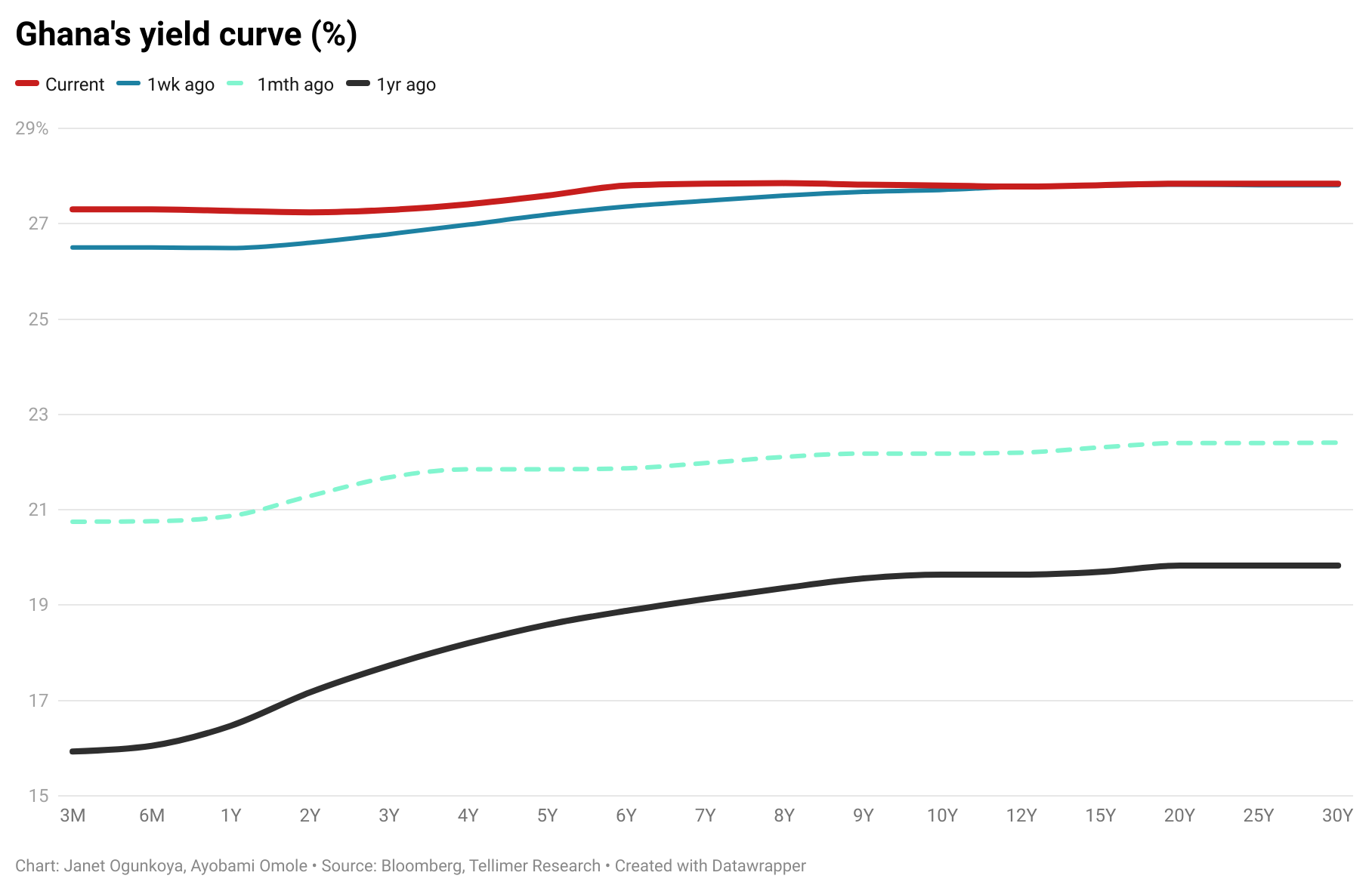