Prime Minister and Acting President Ranil Wickremesinghe was appointed President by parliamentary vote yesterday, receiving 134 of 225 votes versus 82 for parliamentary speaker and ruling SLPP member Dullas Alahapperuma and 3 for left-leaning opposition JVP leader Anura Kumara Dissanayake. Wickremesinghe will serve out the remainder of ousted President Gotabaya Rajapaksa’s term, which ends in November 2024. He also has the right to appoint a Prime Minister, and will look to form an “all-party government” after being sworn in today. The vote comes after the following timeline of dramatic events:

While Wickremesinghe is of the opposition UNP, and has been a critic of the ruling SLPP’s economic policies for some time now, he is seen as being close to the Rajapaksas and received the backing of the majority of SLPP lawmakers (with SLPP member and parliamentary speaker Dullas Alahapperuma receiving the rest, alongside the support of opposition SJB leader Sajith Premadasa, who decided to drop out of the race and throw his weight behind Dullas). Wickremesinghe is also seen as an establishment candidate, having served as PM six times since 1993 (though he never completed a full term).

As such, while Wickremesinghe is likely to be the best outcome for reform continuity (he generally favours market-friendly policies and had made significant headway on negotiating and formulating an IMF-backed reform programme over the past two months), his appointment is unlikely to satisfy protestors and raises the risk of continued political instability. Indeed, protestors continued to gather outside parliament and the presidential secretariat after the vote to express their dissatisfaction.

Beyond demands for a move away from the old political order, which includes the Rajapaksas and Wickremesinghe, protestors are also calling for a reduction of the expansive powers of the executive, which were initially established by Wickremesinghe’s uncle and expanded further by Gotabaya Rajapaksa. Failure to cede ground on this front will likely lead to even more of a backlash, while conversely promises by Wickremesinghe to rollback executive powers could be an important tool to bolster his support with the public despite his widespread unpopularity.

Wickremesinghe had attempted to distance himself from the Rajapaksas in recent days, saying "I am not a friend of the Rajapaksas” and accusing the Rajapaksa administration of "covering up facts" about the economic crisis. Nonetheless, Wickremesinghe’s mandate is undeniably weak, with his UDP losing all 106 of its parliamentary seats in the 2020 elections following the 2019 Easter bombings (Wickremesinghe was only able to become an MP through a “national list”), making his rise to PM and then to President just two years later all the more improbable.

To be fair, it isn’t clear that a victory by Dullas would have satiated protestors, either, as he is a ruling party official and long-time ally of Mahinda Rajapaksa. That said, the opposition’s backing for his candidacy could have placated protestors to a degree, and he certainly is less of an unpopular figure than Wickremesinghe. On the other hand, a coalition government headed by a less reform-minded president would likely have led to a less favourable reform outlook.

As we’ve said before, a lack of public support for the government could undermine its ability to credibly commit to and implement reforms and negotiate with the IMF and bondholders, given the looming risk that they are overthrown. We had hoped that the Rajapaksas' long-awaited resignation would pave the way for a more credible government with public backing, but Wickremesinghe’s election could mean that Sri Lanka is back to square one on this front.

That said, IMF Managing Director Kristalina Georgieva told Bloomberg News over the weekend that talks with Sri Lanka could proceed “quite quickly” once a new government is in place, with IMF Spokesman Gerry Rice citing “constructive discussions” in last week’s press briefing. While Wickremesinghe, who was leading the discussions, should be able now to pick up where he left off, concerns about the durability of his new government could cause further delays, especially if protests ramp back up.

Even once a staff-level IMF agreement is reached, though, we think the restructuring is likely to be a long and complicated process (see here for a detailed explanation why). After falling to c25 cents on the dollar amid the worsening economic and political crisis, bonds are likely trading below recovery value. That said, there may have to be a more durable resolution of Sri Lanka’s political crisis before bonds can rebound, and we are not convinced that yesterday’s outcome provides that resolution.

Moving ahead, the process is binary. If Wickremesinghe is able to form a government that placates protestors and allows him to push forward with Sri Lanka’s reform and restructuring programmes, then bonds should rebound from current prices. Otherwise, if protests ramp up and the government’s durability is still in question, then bonds will likely continue to underperform given the risk of further destabilising protests and yet another overthrow of the government.

Against this backdrop, we prefer to wait to see whether or not Wickremesinghe is able to form an “all-party government” that satisfies the demands of protestors and the opposition before upgrading our recommendation on Sri Lanka’s eurobonds, and retain our Hold recommendation (excluding the ‘22s, which still trade at a c5pts premium to the rest of the curve amid ongoing legal action) at US$25.8 (36.2% YTM) for the SRILAN 7.55 03/28/2030s at the time of writing on Bloomberg, with the '30s bouncing by c1.5pts so far on the day amid the election news and a broader EM rally. 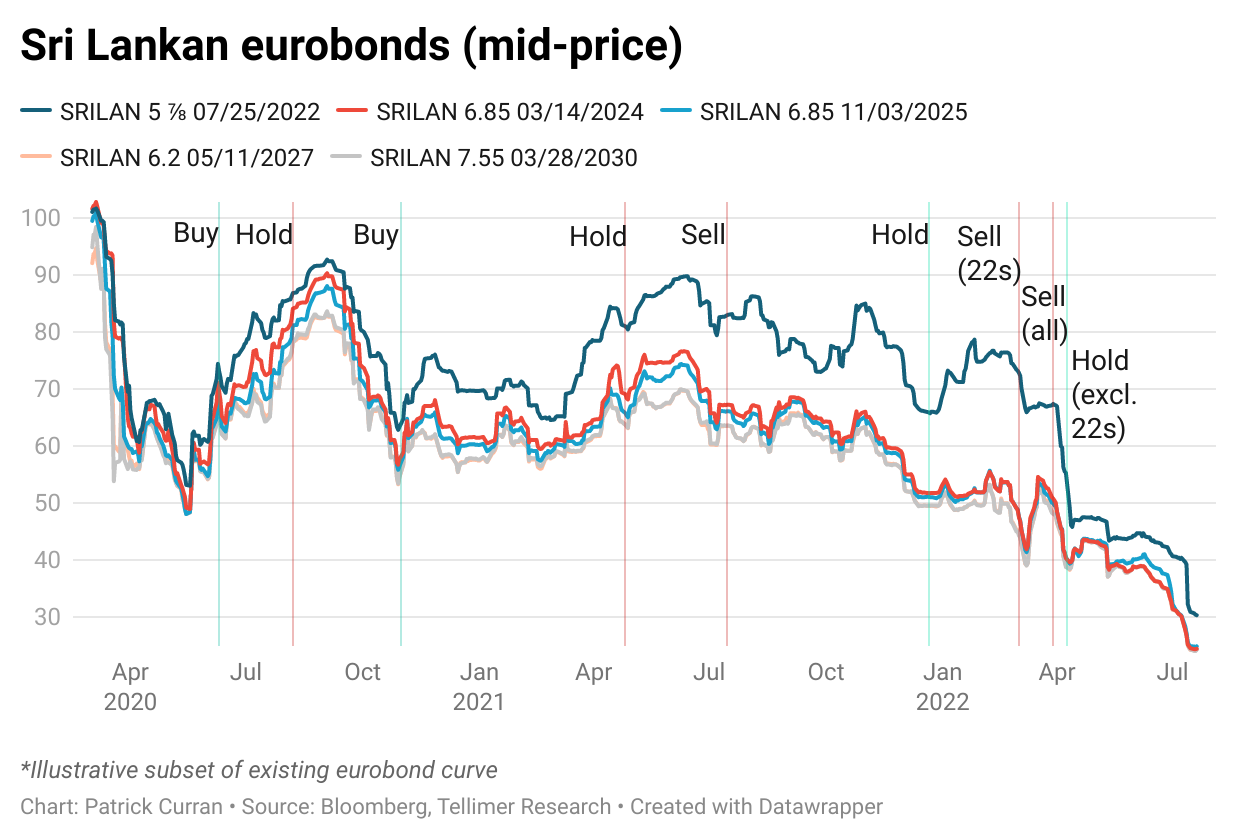 Sri Lanka’s restructuring is off to a rocky start, July 2022