President and Finance Minister Ranil Wickremesinghe presented Sri Lanka’s 2023 budget on Monday. The headline numbers come as no surprise as they affirm prior projections, with the government still targeting a 9.8% of GDP budget deficit and a 4% primary deficit in 2022 (in line with last month’s interim budget) and a 5% budget deficit and 2.3% primary surplus by 2025 (in line with the IMF staff-level agreement and investor presentation in September). This will reduce debt below 100% of GDP over the medium term, from 145% in mid-2022, per the latest official debt figures (revised up from 122% based on the use of the trailing 12-month rather than full-year projected GDP in the denominator). 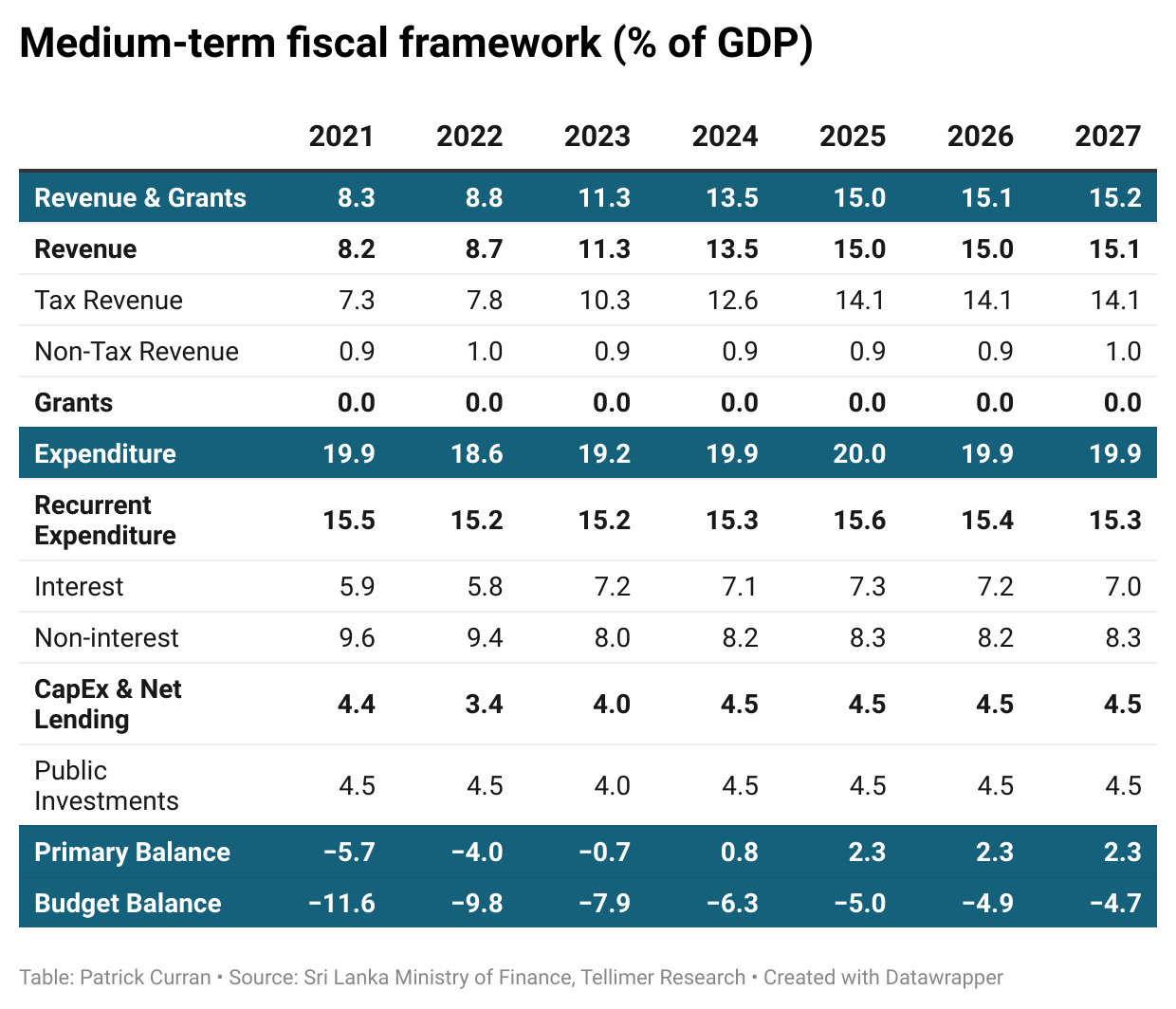 Many of the revenue measures were already laid out in last month’s interim budget, including a value-added tax (VAT) hike from 12% to 15% (following the increase from 8% to 12% in June) and an increase in the telecom levy from 11.25% to 15% and corporate income tax from 24% to 30%. New measures include the removal of VAT exemptions effective April 2023 (estimated to cost c1% of GDP), increasing the standard import duty by 5% to offset a gradual phaseout of protectionist levies, a 20% increase in fees in charges, and various administrative measures (see here for a more complete summary of new tax measures).

It is doubtful that the new measures, as announced, will be enough to underpin Sri Lanka’s ambitious revenue targets. The government is targeting a mammoth 63.5% yoy increase in revenue in 2023 in nominal terms, which is 34% in real terms once projected inflation of 29.5% is factored out. This is despite a projected real GDP contraction of 3% in 2023, and would come hot on the back of a projected 43% yoy nominal (-5% real) increase in 2022. With an economy in contraction, it is hard to see how such a large increase can be achieved.

To be fair, the government has recorded a 38% nominal revenue increase in the first nine months of 2022, driven in part by the VAT increase (from 8% to 12% in June and again to 15% in September plus the VAT hike from 15% to 18% on financial services in January), but the main driver was inflation (which averaged 41% over that period, meaning real growth was just -3%) and over one-third of the total increase stems from the one-time surcharge tax charged on windfall profits this year. Stripping this out, 2023 revenue growth is projected to be an even more massive 73.5% yoy (or +44% in real terms).

This seems a rather heroic assumption, even factoring in the new revenue measures. The medium-term revenue target of 15% of GDP will be equally difficult to achieve, with Sri Lanka last recording revenue of that magnitude in 1999 and revenue reaching just c12-13% of GDP in five years before the 2019 tax cuts were implemented. With the tax base eroding since then, it will take more than just the reversal of the tax cuts and some new administrative measures to boost tax collection above this level. 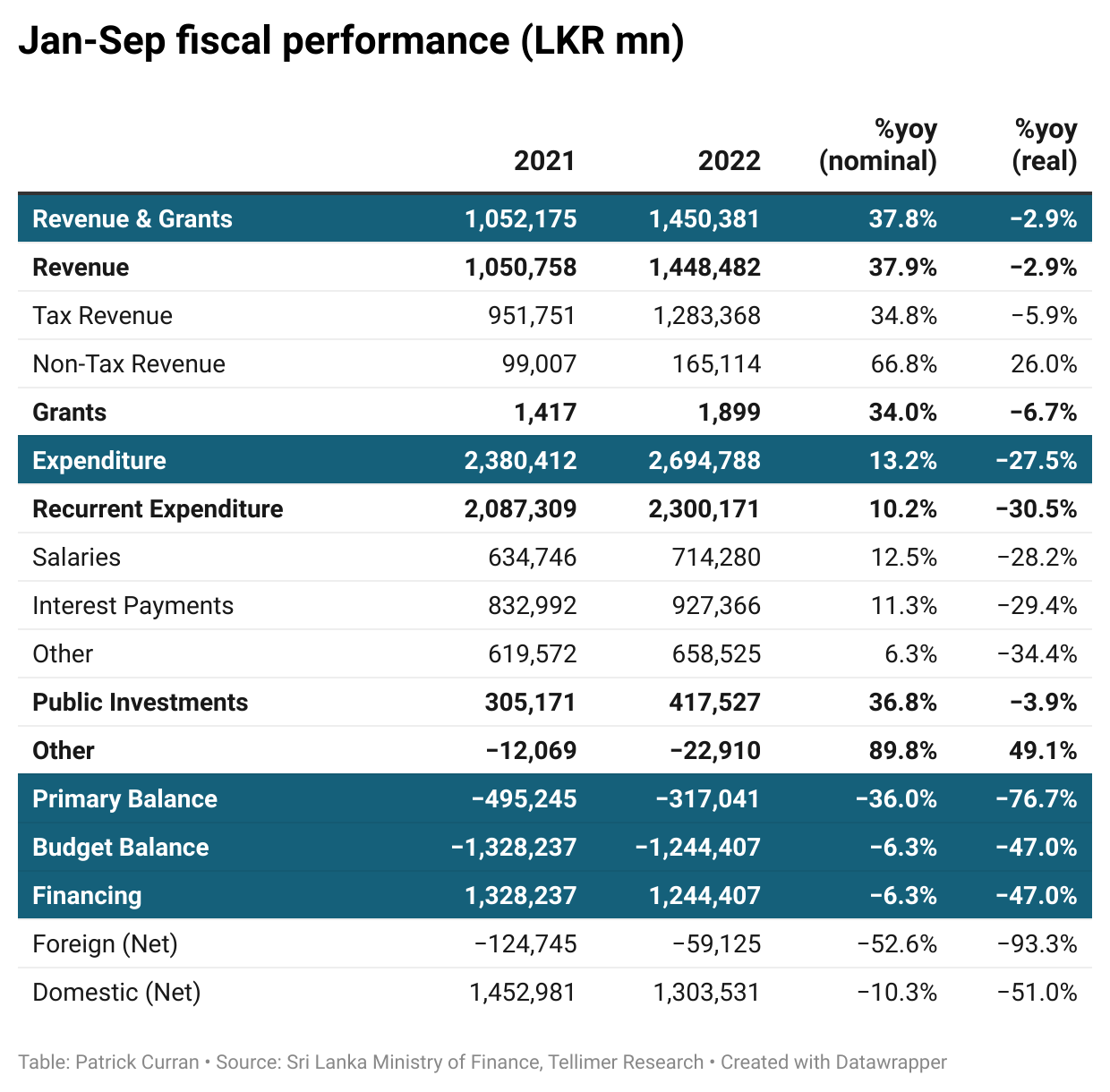 Besides the revenue estimates, the other key elaborations compared to the interim budget, investor presentation and IMF staff-level agreement relate to the management of Sri Lanka’s state-owned entities (SOEs). The budget reveals a net loss of LKR727bn (3% of GDP) over the first eight months of 2022 across the 52 key SOEs (up from LKR 87bn in 2021), with LKR134bn of profit at 31 SOEs offset by LKR862bn of losses at the rest. 99% of the losses were generated by the Ceylon Petroleum Corporation (CPC – 73% of the total), Ceylon Electricity Board (CEB – 13%) and Sri Lanka Airlines (SLA – 13%).

The losses at CPC and SLA were mainly driven by the rise in international fuel prices, which more than doubled the CPC’s cost of sales. At CPC and CEB, the losses were also driven by below-cost tariffs, which should be aided moving forward after the implementation of cost-reflective prices for the CPC in May and CEB in August. In the meantime, the Treasury was forced to transfer LKR80bn (0.3% of GDP) to the CEB to allow it to settle its outstanding obligations to the CPC.

Moving forward, Wickremesinghe says that a comprehensive strategy will be developed to restructure all SOEs, with a focus on the financial viability of CPC and CEB, and that a unit will be created at the Ministry of Finance for this specific purpose. The government also plans to privatise five companies, including SLA, Sri Lanka Telecom, Colombo Hilton, Waters Edge and Sri Lanka Insurance Corporation (SLIC), and will use the proceeds to bolster its FX reserves.

Lastly, the government will recognise US$1.7bn of loans from China Exim Bank to the CEB, the Sri Lanka Ports Authority (SLPA) and Airport and Aviation Services Sri Lanka (AASL), plus the guaranteed FX debt of the CPC as government debt by the end of 2022 to strengthen their balance sheets and reduce future transfers. As guaranteed SOE debt is already included in the DSA and restructuring perimeter, this is simply an accounting exercise and will help facilitate the SOE restructuring/privatisation efforts.

More broadly, Wickremesinghe’s rhetoric in the speech takes a firm line on the need for fiscal austerity and less government involvement in the economy and outlines goals to create a “modern, export-oriented, competitive economy led by the private sector” that can reach growth of 5% over the medium term and 7-8% over a longer horizon. He also speaks to the need to rein in the current account deficit to reduce Sri Lanka’s reliance on external borrowing and to end the practice of money printing.

Both the specific SOE reform agenda and more general long-term reform rhetoric are positive, and bode well for Sri Lanka’s reform efforts. However, delivery may prove difficult, and if Sri Lanka’s non-tax revenue and FX reserve projections hinge on significant privatisation windfalls, then targets could be undermined if those efforts are delayed or fail to materialise. So overall, while we welcome the government fiscal targets and reform rhetoric, risks are skewed clearly to the downside.

On the restructuring front, Wickremesinghe says that the government is in the process of resolving the outstanding case filed by one of the bondholders and is in dialogue with China and India on the debt restructuring, adding that “We are confident that these discussions will lead to positive outcomes.” But, while the government insists that bilateral restructuring talks will be concluded by year-end, we continue to think that this is an overly ambitious target (see here for our initial reasoning and here and here for a recording and transcript of a recent podcast with NDB Capital Holdings, where we unpack the key restructuring challenges at length).

One of the key issues will be how to treat domestic debt (see here and here for our initial takes, the above podcast for a deeper dive and the government’s recent Q&A document for their most recent guidance). Interestingly, a news report this morning suggested that a parliamentary committee had taken the decision to include domestic debt in the restructuring. While the reports are not yet verified, this would be a major development.

From the domestic perspective, the government will need to conduct stress tests to understand the potential impact of a domestic restructuring (including indirectly via financial instability and reduced lending and directly via recapitalisation and liquidity support) and design mechanisms to deal with the fallout (including regulatory forbearance, a financial stability fund to provide liquidity and solvency support, and, potentially, recapitalisation or restructuring in cases where losses cannot be absorbed).

While domestic investors wait for more clarity on what instruments (ie bonds versus bills) and creditor classes (ie banks versus pensions versus the central bank) will be restructured, it may be difficult to fund Sri Lanka’s budget (with domestic financing covering the whole deficit so far in 2022 and projected to cover three-quarters of the deficit in 2023) and lead to further monetisation if the central bank is forced to plug the gap. From the external perspective, however, the inclusion of domestic debt would be undoubtedly positive, reducing the amount of relief required from external creditors.

Overall, eurobonds have reacted positively in the run-up and wake of the budget, with the ‘23s rising by c2.75pts so far on the week to just under US$26 at the time of writing and the ‘30s rising by c2.25pts to US$25. We think this is appropriate, with the budget aligning with the medium-term consolidation plans laid out recently by the IMF and the investor presentation and positive rhetoric on the government’s SOE reform plans and longer-term ambition to reduce the government’s role in the economy. 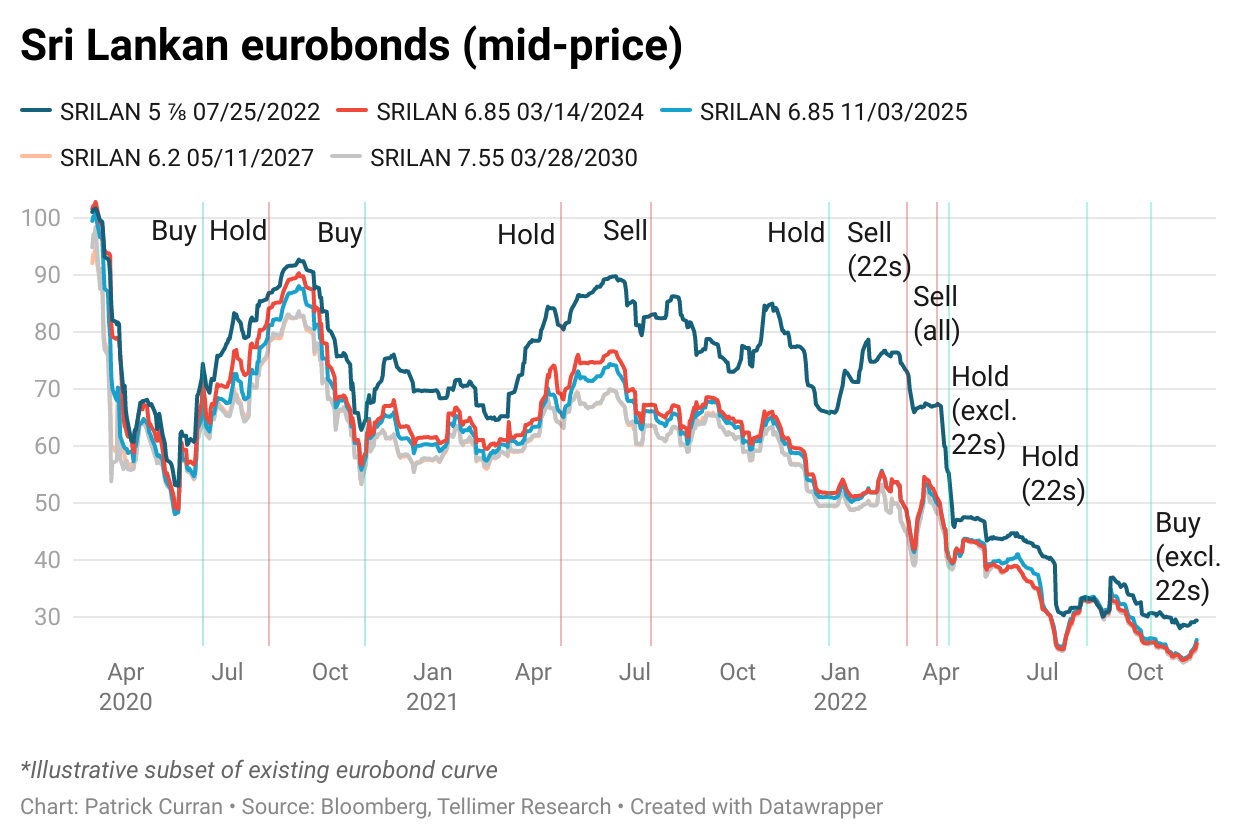 That said, we are still not confident in the government’s ability to deliver such an ambitious budget. As we outlined earlier, the revenue projections are incredibly optimistic, notwithstanding the new tax measures, and will be very difficult to achieve. Further, as we’ve pointed out in a previous note, an adjustment of this magnitude would be in the top decile of all IMF-supported programs for low-income countries since 1990 (note: Sri Lanka is a middle-income country) and a 2.3% of GDP primary surplus is well above Sri Lanka’s average deficit of 1% of GDP from 2010-19 and maximum surplus of 0.6% surplus since 1990.

As such, the credibility of Sri Lanka’s budget will be put to the test, and the success of its IMF-backed reform programme will hinge on its ability to deliver on consolidation plans that are incredibly ambitious from both a cross-country and historical perspective. So, while we welcome the budget as another positive step on Sri Lanka’s road to reform, we are not convinced that it will be able to stay the course.

In the meantime, however, we think the budget will lend further support to Sri Lanka’s nascent eurobond rally, and, alongside the headlines that domestic debt may be included in the restructuring think it will help unlock some of the upside for its eurobonds, which are trading at the bottom of our estimated US$24-40 recovery value range.

Sri Lanka: Upgrade to Buy as bonds drop to 25 cents on the dollar, October 2022

Sri Lanka: Interim Budget is encouraging but credibility will be tested, August 2022

Sri Lanka’s restructuring is off to a rocky start, July 2022