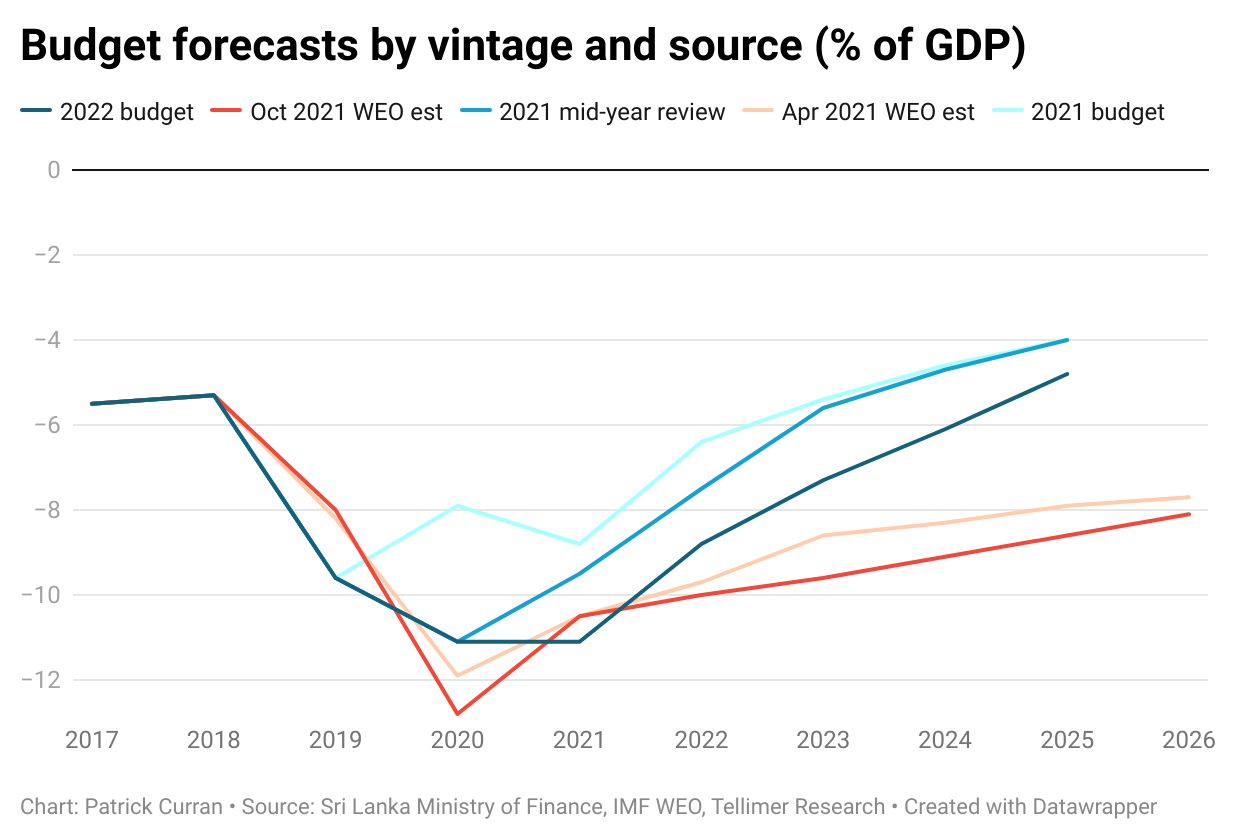 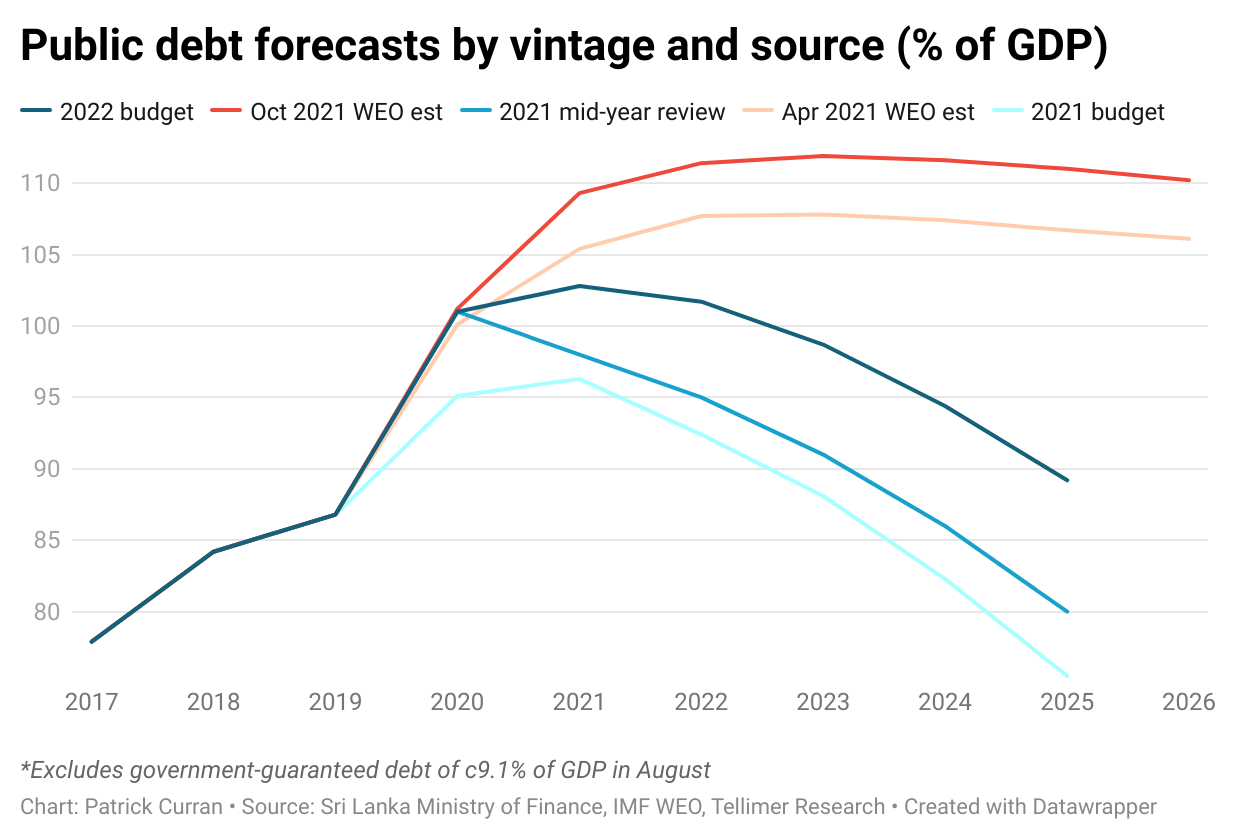 In our view, the 2022 Budget falls well short of what is needed to set Sri Lanka’s debt on a sustainable path and avoid default, and we retain our Sell recommendation on the entire eurobond curve beyond the SRILAN 5 ⅞ 07/25/2022s. Indeed, bonds fell across the curve on the back of the budget, with the spread on the SRILAN 6.85 03/14/2024s widening by 106bps on the day and prices falling 0.5pts to US$61.27.

With the SRILAN 6.85 03/14/2024s now trading just above our target price of US$60 from July after dropping sharply since the dismal reserve print on 5 November, but economic conditions having deteriorated significantly since, we plan to produce an updated recovery analysis soon to decide whether to maintain our Sell recommendation or upgrade to Hold. 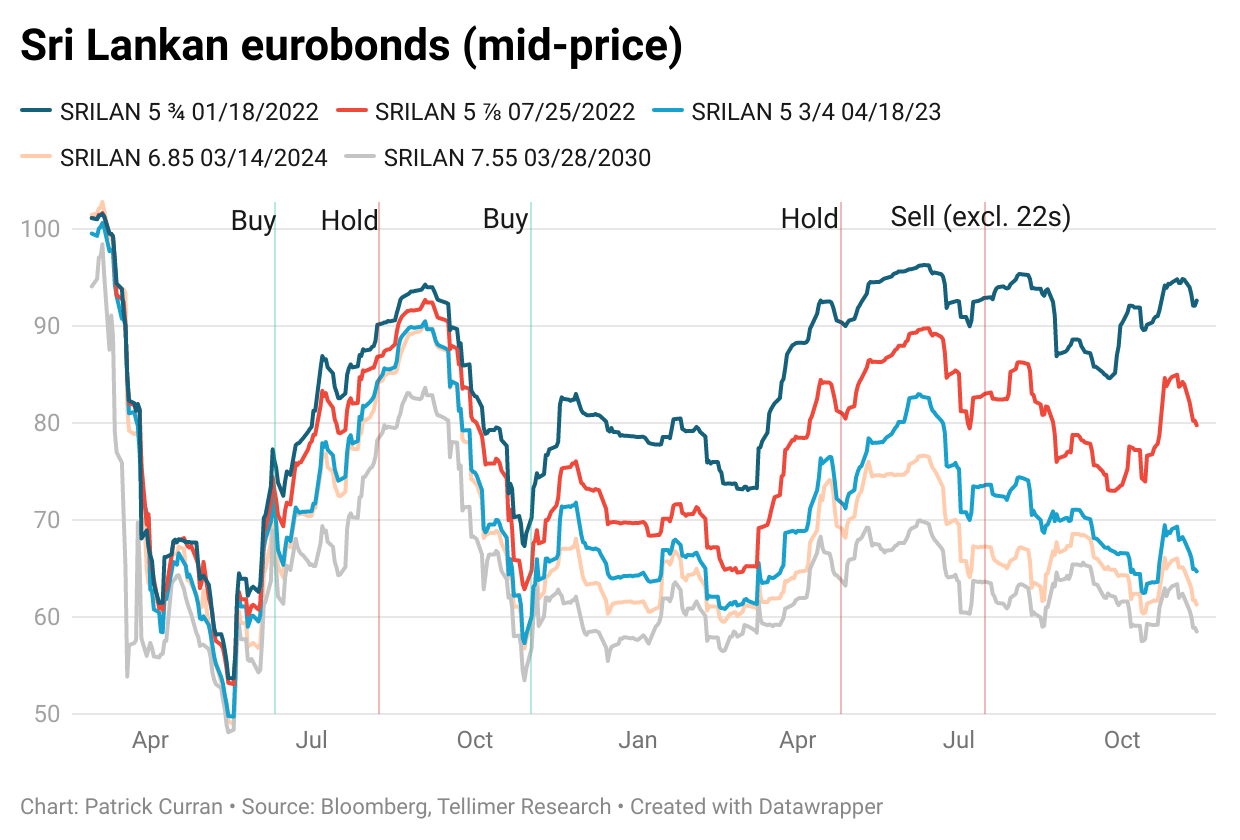 In the note that follows, we will unpack the budget in detail, starting with 2021 performance, moving on to 2022 targets, and finally analysing the medium-term framework.

After achieving an 11.1% of GDP budget deficit in 2020 (revised up from the initial 7.9% estimate), the government had initially targeted an 8.8% of GDP in 2021. However, at the time, we highlighted that overly optimistic assumptions made slippage likely. And indeed, the target was revised to 9.5% during the mid-year review, and is now projected to end the year unchanged at 11.1% of GDP (or 9.8% of GDP when excluding pandemic-related spending).

The underperformance is due largely to lower revenue, which was 24% below target in the first 8 months of the year after rising just 4% yoy (despite the low base from 2020). Meanwhile, spending was 12% below target (-63% capex, +10% current) after rising 10% yoy (+22% yoy capex, +8% yoy current). Interest payments (22% above target and +7% yoy) now absorb 74% of government revenue while salaries and pensions (1% above target and +9% yoy) absorb another 78%, together absorbing over 150% of government revenue and leaving little room for low-hanging spending cuts or pro-growth capex. 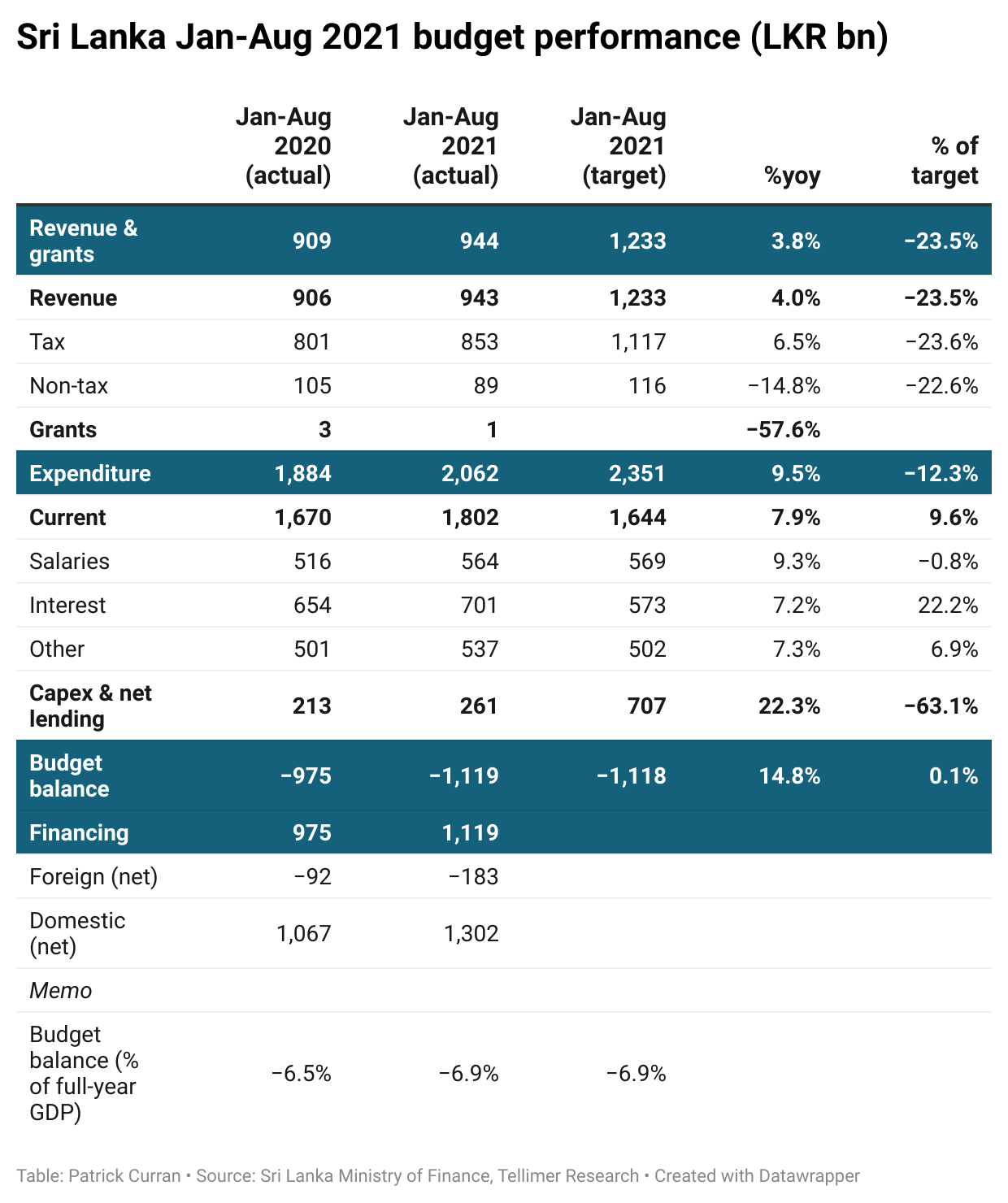 Overall, the deficit through the first 8 months of the year widened from LKR975bn (6.5% of full-year GDP) to LKR1,119bn (6.9% of full-year GDP), and is broadly on pace to achieve its 11.1% target with shortfalls on revenue exactly balanced by shortfalls on spending. In net terms, the deficit was financed entirely from domestic sources, which has slightly improved the currency composition of Sri Lanka’s debt stock but has also been a key contributor to domestic financing constraints and subsequent monetisation of the budget deficit by the CBSL.

The 2022 budget targets consolidation to an 8.8% of GDP deficit from 11.1% of GDP in 2021. While this is a rather tepid consolidation effort given the scale of Sri Lanka’s fiscal imbalances, even more concerning is the lack of realism behind the targets. The budget targets a 47% yoy rise in revenue to LKR2.3tn (+50% tax, +33% non-tax), driven by a 68% rise in income taxes, 59% rise in goods & services taxes, and 21% rise in import levies. Meanwhile, there is little effort to rein in spending, which is projected to rise 15.5% yoy to LKR3.9tn (+6% current, +60% capex), which will improve the composition of Sri Lanka’s budget but fails to meaningfully correct Sri Lanka’s endemic fiscal imbalances. 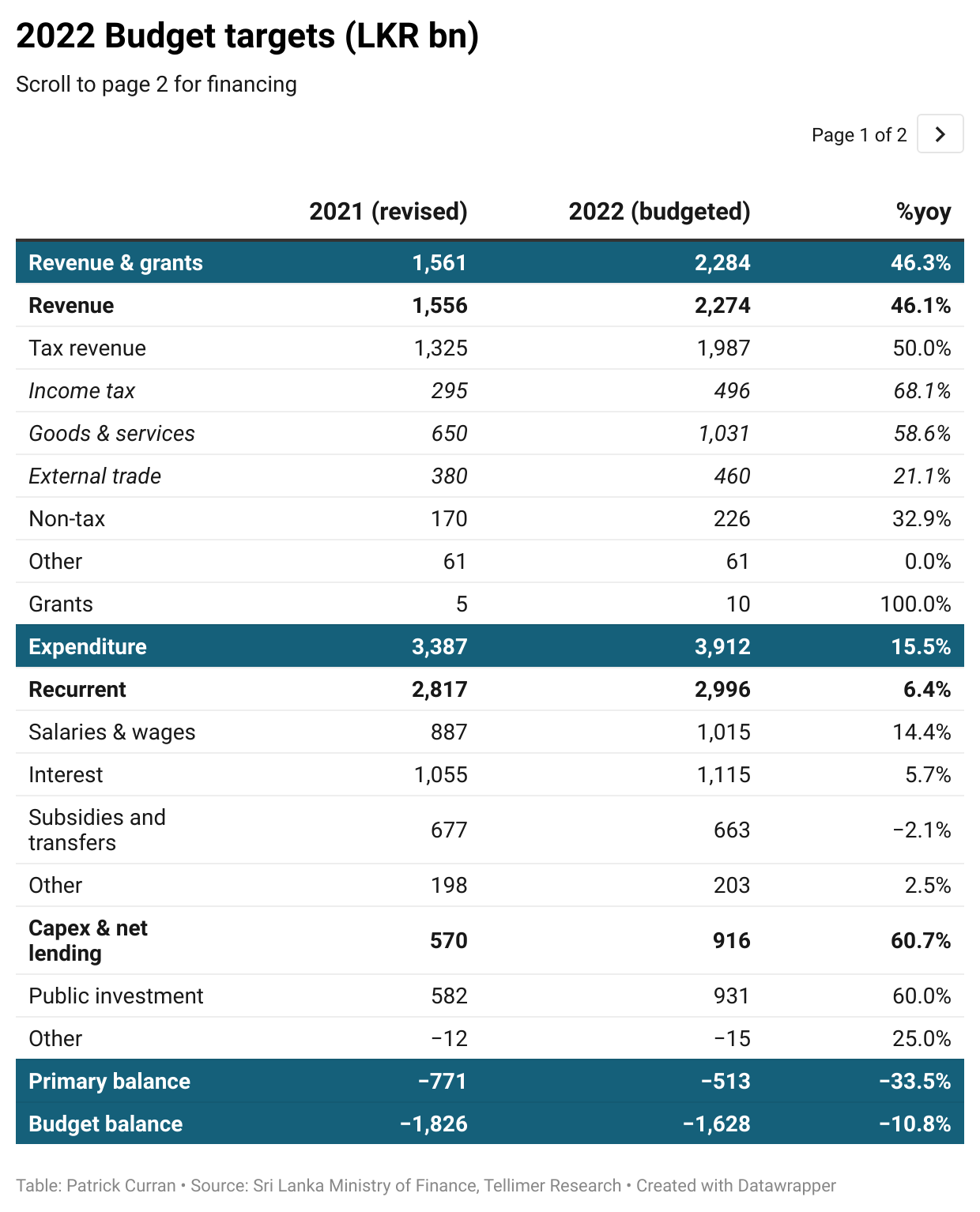 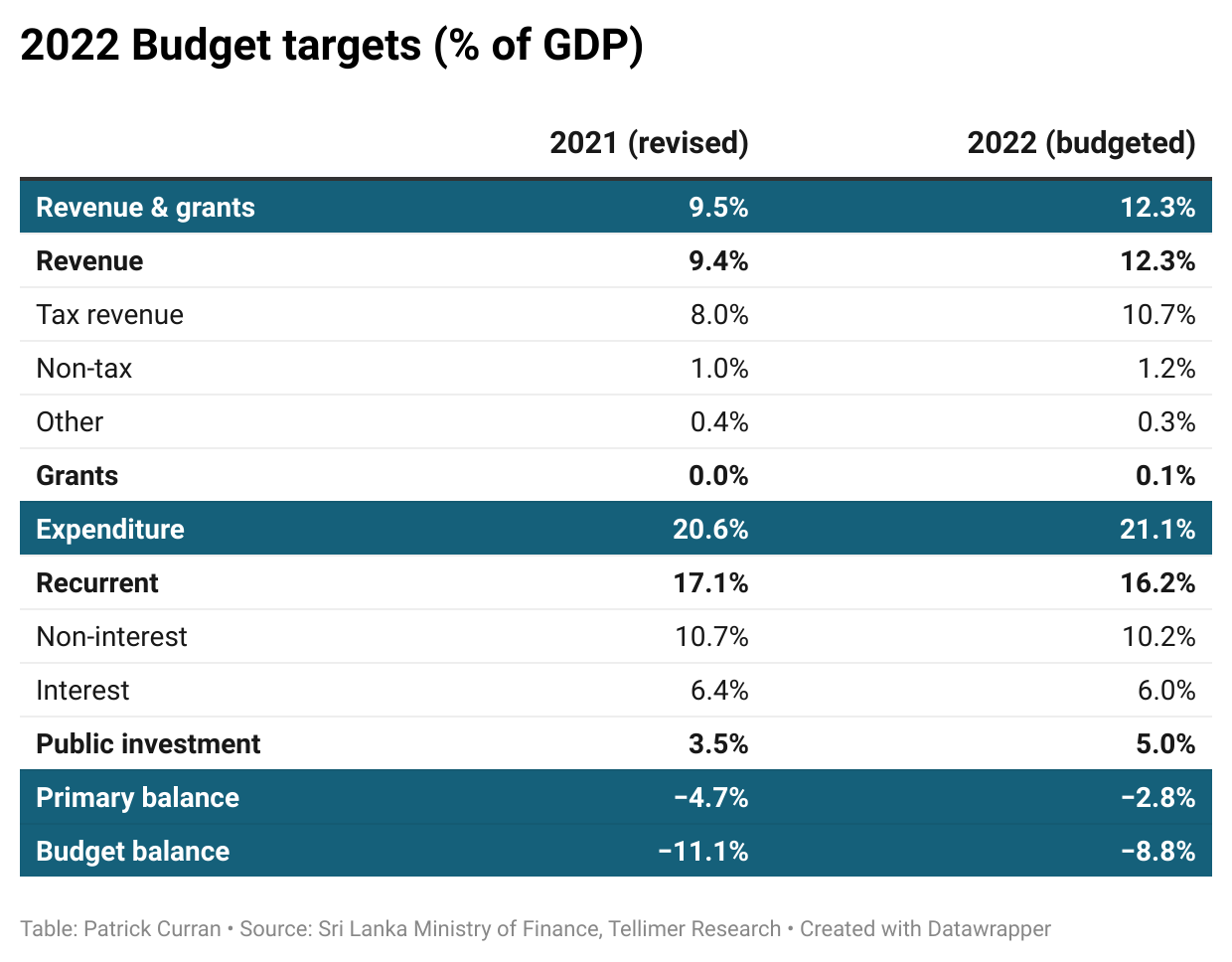 Just like last November’s budget, there are few concrete measures underlying Sri Lanka’s revenue projections. There are six specific tax measures projected to earn an additional LKR333m (1.8% of GDP), of which over a third is temporary and will expire at the end of 2022. The remainder of the increase in taxes will seemingly come from more efficient tax administration and the nominal growth impact (projected at nearly 13%), making it exceedingly unlikely that Sri Lanka’s revenue targets will be met. In any case, key tax measures include: 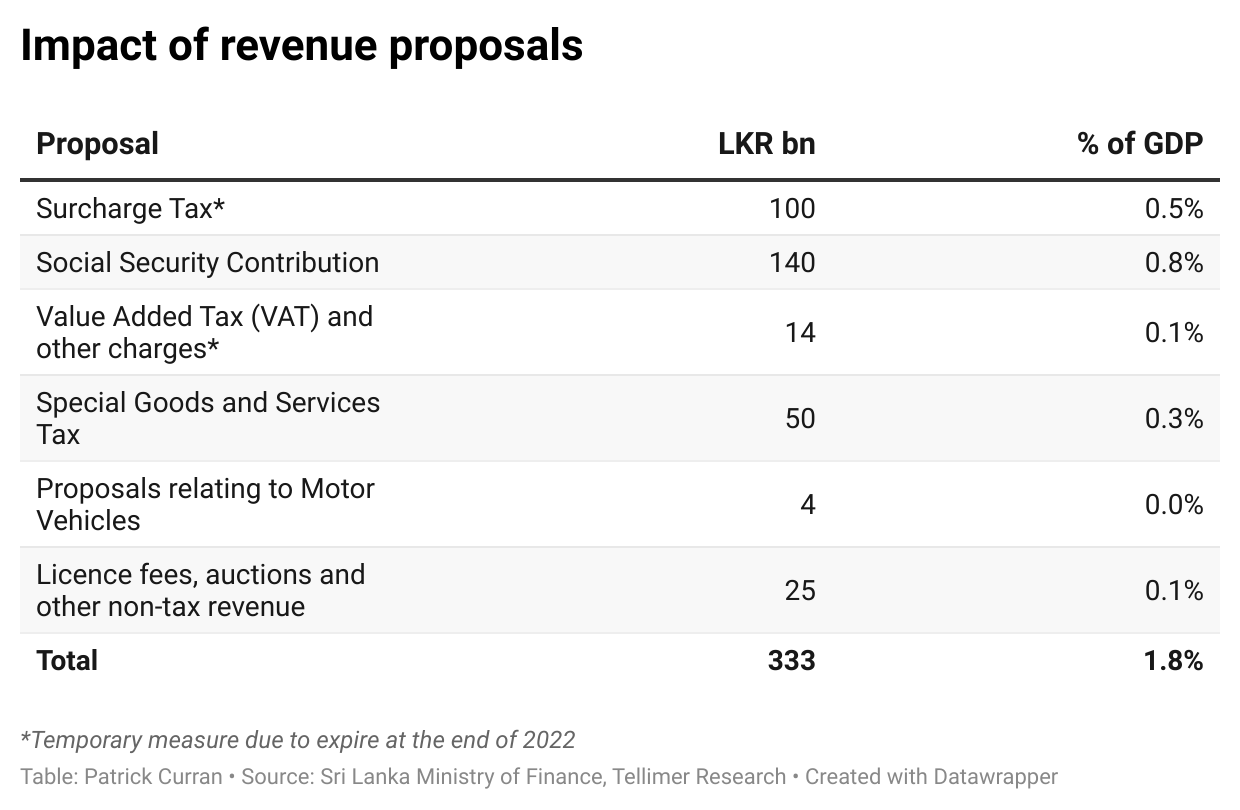 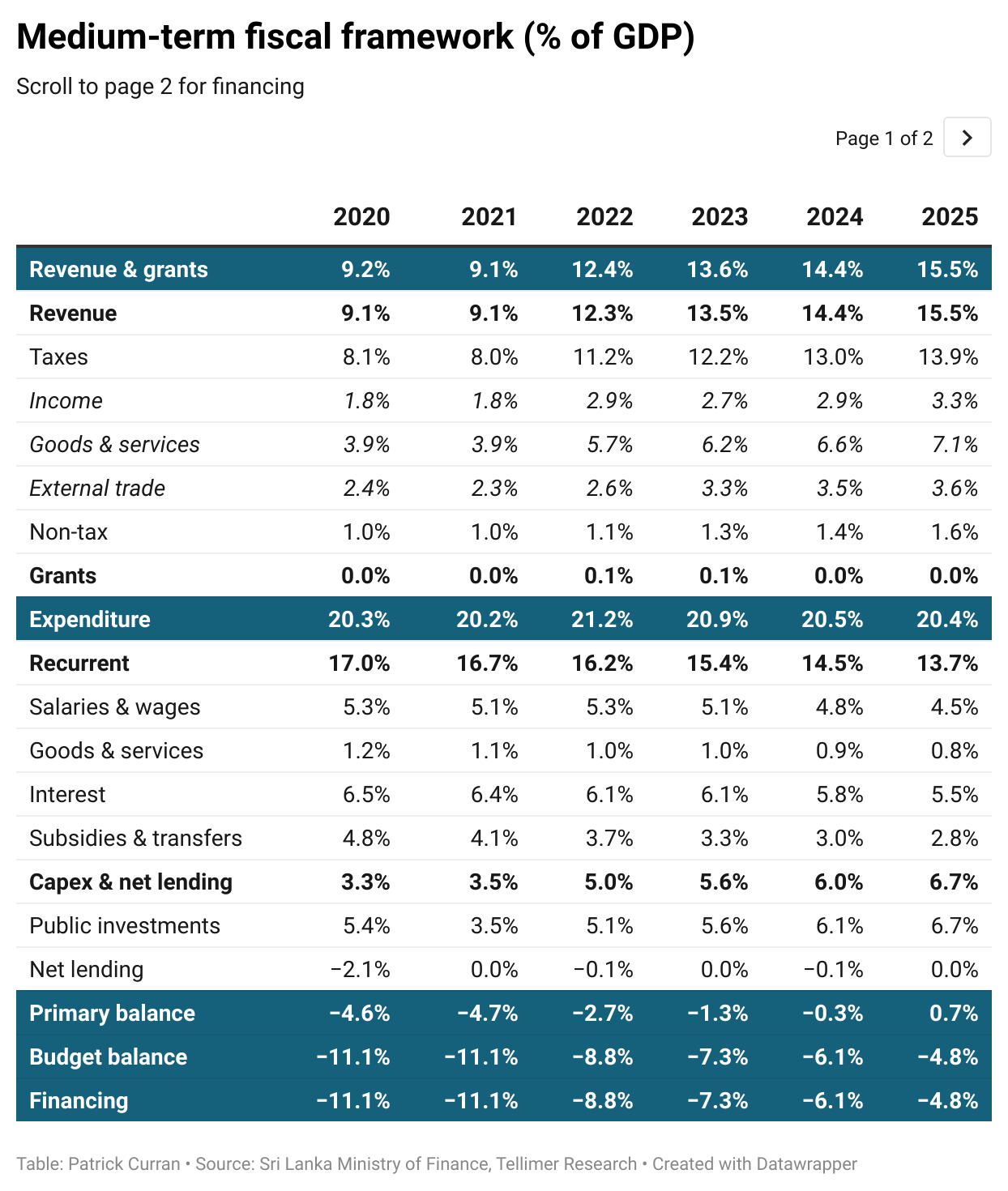 However, as was the case with this year’s budget, it is unclear what is driving such a dramatic increase in revenue. Further, the macro assumptions that underly its framework are quite optimistic, including:

As such, we think the actual budget deficit will come in much wider than projected over the medium-term, undermining Sri Lanka’s fiscal consolidation plans and failing to put debt on a sustainable trajectory. Even assuming Sri Lanka’s budget targets are achieved, we think Sri Lanka’s debt reduction projections are overly optimistic. Plugging in the IMF’s growth and inflation assumptions and our own interest rate assumptions, debt falls to just 104% of GDP by 2025 versus the government’s 89% of GDP projection.

Further, our projection assumes that the LKR stays stable in real effective terms and that the real interest rate on domestic debt is unchanged. Allowing the LKR to depreciate to 230/US$ by the end of the year and stay steady in real effective terms thereafter, and increasing the real domestic interest rate by 200bps to account for rising inflation and the removal of yield caps, then public debt continues to rise to 113% of GDP (excluding guaranteed debt of LKR1,484bn, or c9.1% of GDP, in August). 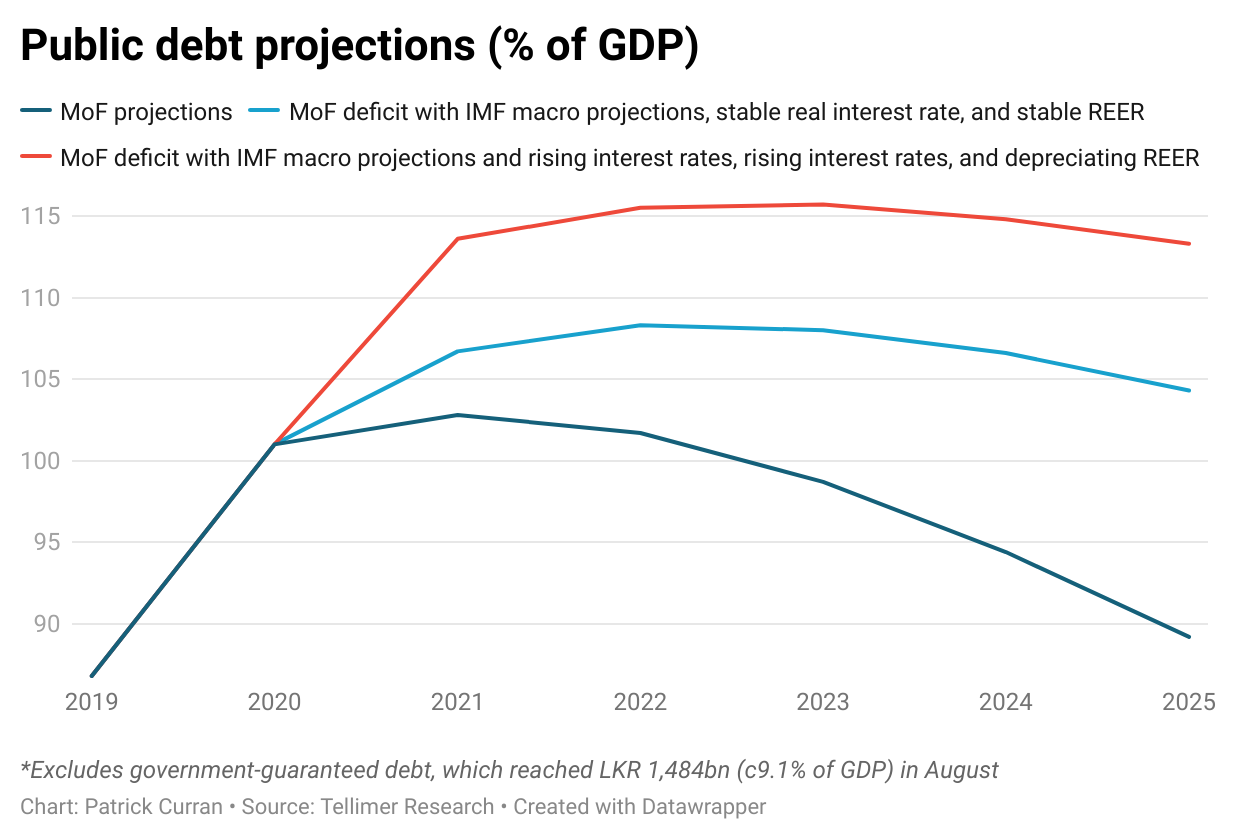 In our opinion, Sri Lanka’s 2022 Budget fails to properly diagnose or address Sri Lanka’s macro imbalances. Not only is the consolidation path insufficiently ambitious, but it is built on overly optimistic assumptions that will likely give way to serious slippage. Without real policy efforts to boost revenue and control spending, Sri Lanka is unlikely to be able to set debt on a sustainable course.

The tone of Finance Minister Rajapaksa’s speech was also disconcerting, effectively blaming previous administrations for Sri Lanka’s buildup of debt while doubling down on policies to attract FX via import substitution, FDI attraction, and the “support of friendly countries” without acknowledging the role that overly expansionary fiscal policy has played in Sri Lanka’s spiralling BOP crisis.

Against this backdrop, we still think that default is inevitable for Sri Lanka beyond its July 2022 eurobond maturity, and potentially even sooner if its one-off financing measures fail to materialise (with much of its financing pipeline seemingly aspirational rather than concrete, and newly published plans to securitise remittances looking increasingly desperate).

As such, we retain our Sell recommendation on the entire eurobond curve beyond the SRILAN 5 ⅞ 07/25/2022s. With bonds plummeting over the past week, the SRILAN 6.85 03/14/2024s now trade just above our target price of US$60 from July. We, therefore, plan to produce an updated recovery analysis soon to decide whether to maintain our Sell recommendation or upgrade to Hold. But with another dismal budget and plummeting reserves, the probability of default continues to rise.